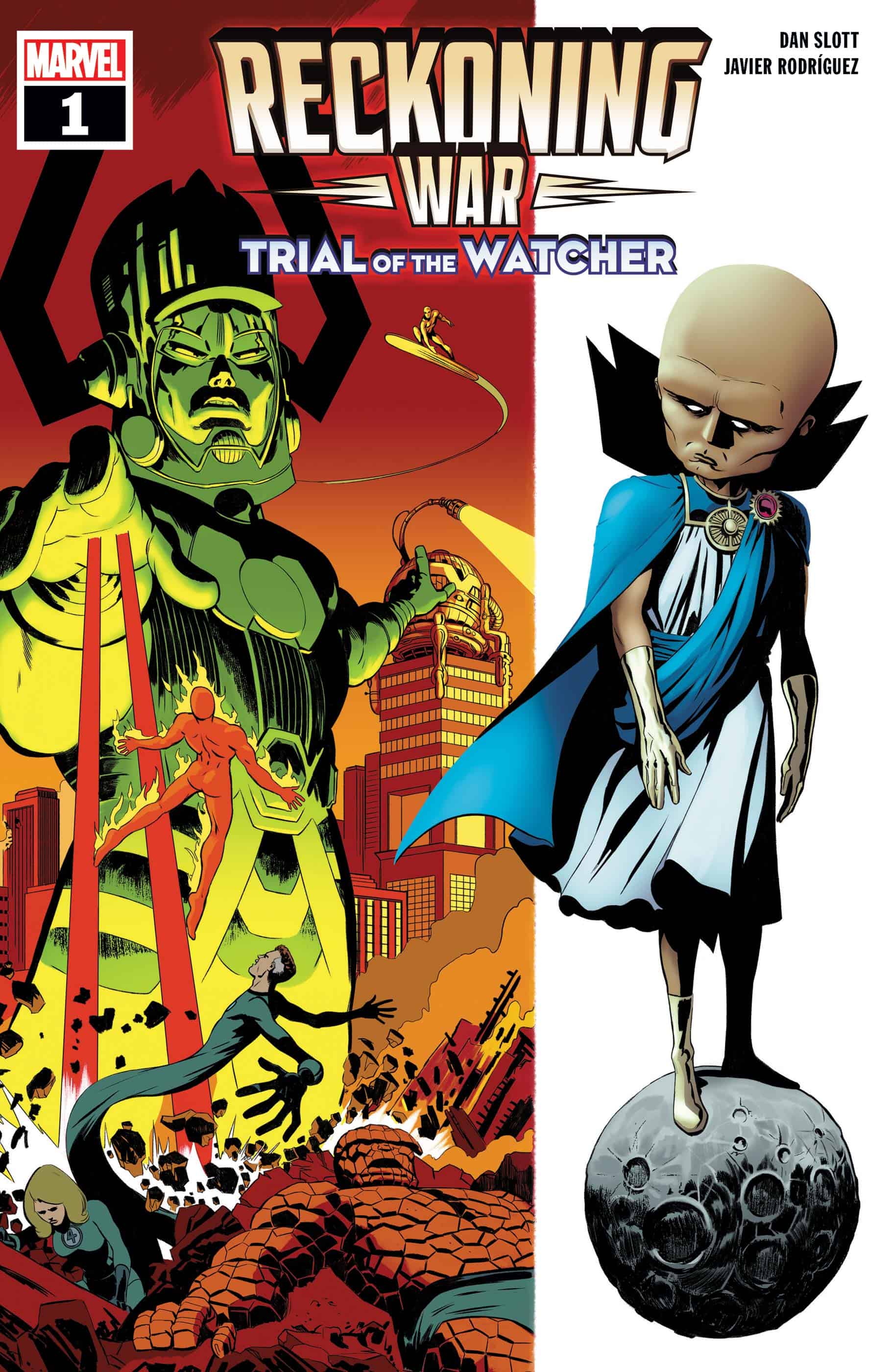 You may have read the book A Clockwork Orange, or seen the film starring Malcolm McDowell.  You may be reminded of that story in this ancillary tale of “The Reckoning War,” in which our Watcher’s own father does a “Malcolm McDowell” on him as punishment for repeatedly mucking about in the affairs of planet Earth.

The Watchers may be all eyes when it comes to viewing cosmic history as it happens, but when our Watcher begs them to do something about the menace of “the Reckoning,” aka the Prosilicans who learned how to destroy other worlds from the original Watchers, they’re all deaf ears.  Instead of heeding our friend, his father forces him to watch the one “What If…?” he’s never looked at.  (As you know, the Watcher likes to play “Rod Serling” in the series What If…?, in which he gazes at and narrates different outcomes of pivotal moments in Marvel Universe history.)  The alternate reality with which our friend is thus excruciatingly punished happens to be… 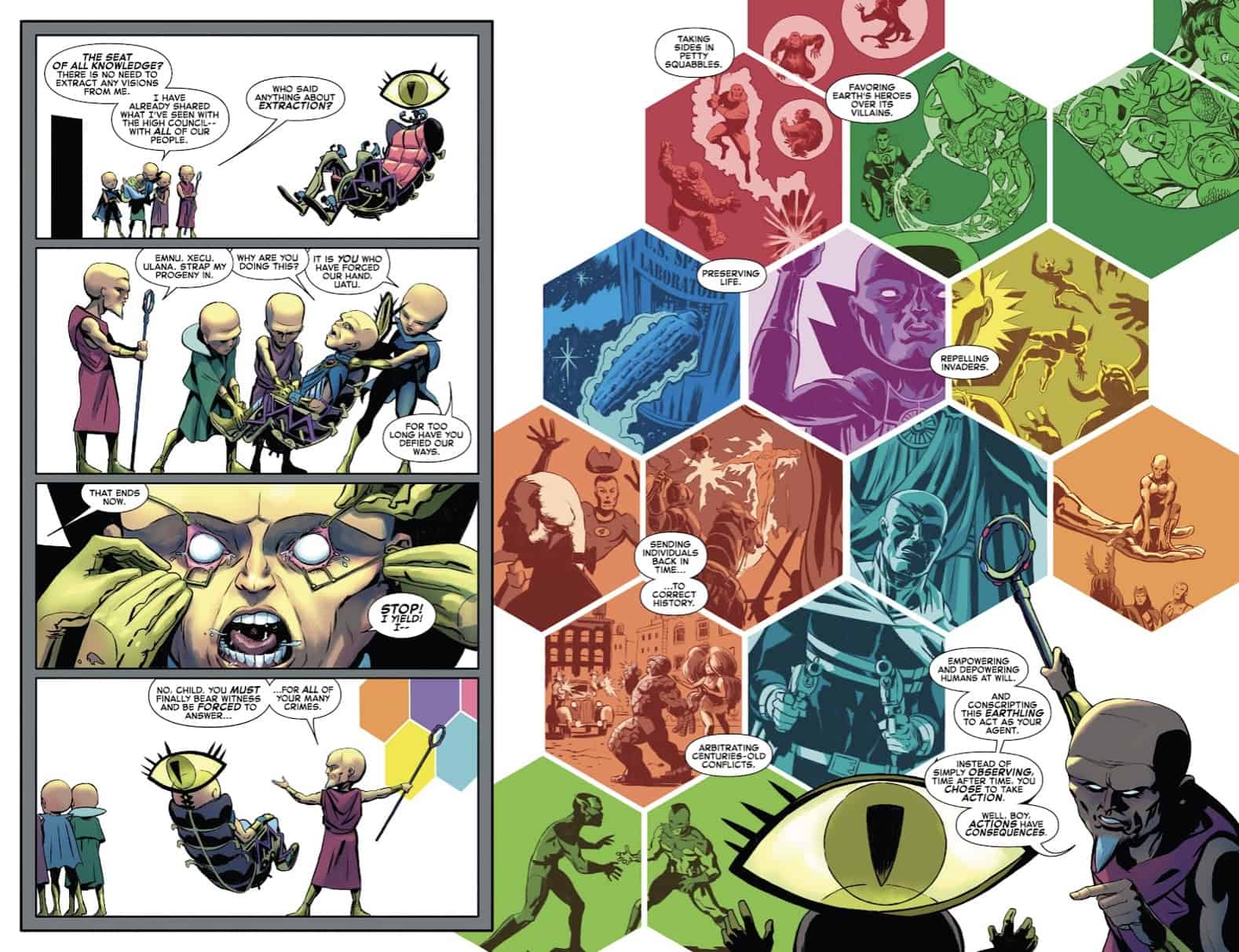 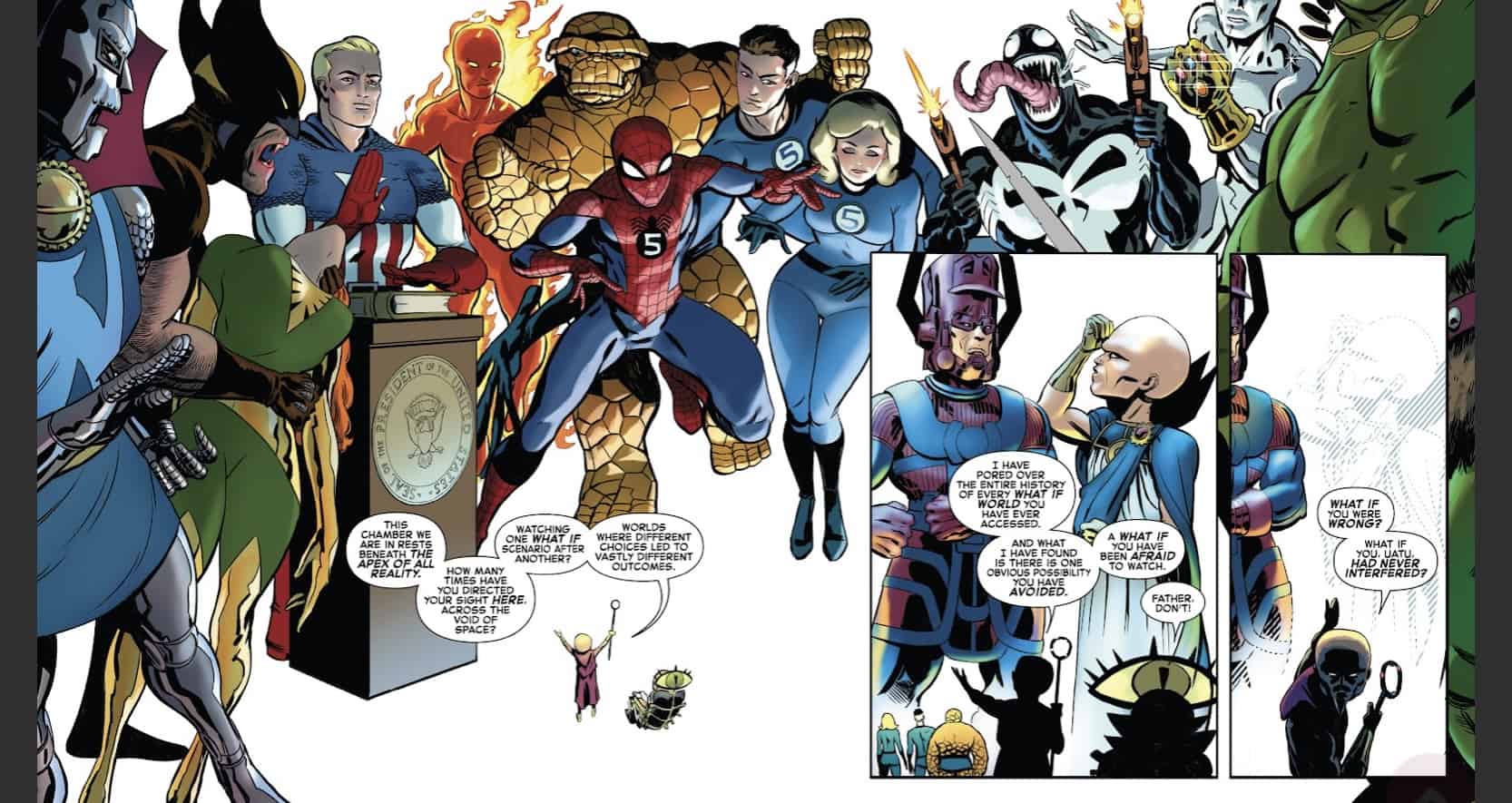 “What If…the Watcher Did Not Warn the Fantastic Four About Galactus?”

As the story of a reality adjacent to our own unfolds, the Watcher does not attempt to hide Earth behind the illusion of being a star, or behind a shield of asteroids.  He further does not give Reed Richards a heads-up about the approach of the Silver Surfer.  It’s Nick Fury of SHIELD who tips off the FF that the Surfer is coming.  Things proceed from there as we remember.  The Silver Surfer lands on the roof of the Baxter Building and rings the dinner bell for Galactus, and the Thing knocks him off.  (More about that in a minute.)  Then, of course, Galactus comes to feed on our planet, and things veer off drastically.  Reed goes into his lab, which is being insinuated with Galactus’s technology, while Sue, the Torch, and the Thing battle Galactus.  At first, things could not go any worse.

Galactus strikes the Invisible Girl blind.  The Silver Surfer lands not in Alicia Masters’s skylight, but on top of someone’s parked car, from which he flies up and battles the Torch.  Johnny must use so much power knocking the Surfer out that he actually leaves burns all over his own body!  The Thing actually gets his rocks knocked off, as it were, defeating the Punisher.  (Galactus’s cyborg watchdog Punisher, not that awful, brutal, vulgar anti-hero.)  Reed’s attempts to tech up an anti-Galactus weapon result in the melting of Mr. Fantastic’s flesh, but he does succeed in creating a “nullifying” gun that blasts Galactus out of existence before he can turn on his elemental converter and turn the oceans into energy, annihilating all life on Earth in the process!  The Silver Surfer flies off, reveling in his freedom from Galactus and his ability to explore the universe.  And…here’s the kicker:  Reed’s solution to the menace of Galactus translates into new technologies and energy sources that completely transform every part of human life everywhere in the world—for the better, making Earth a Utopia of scientific, material, and cultural abundance for every human being!  Buckminster Fuller and Gene Roddenberry would have loved it. 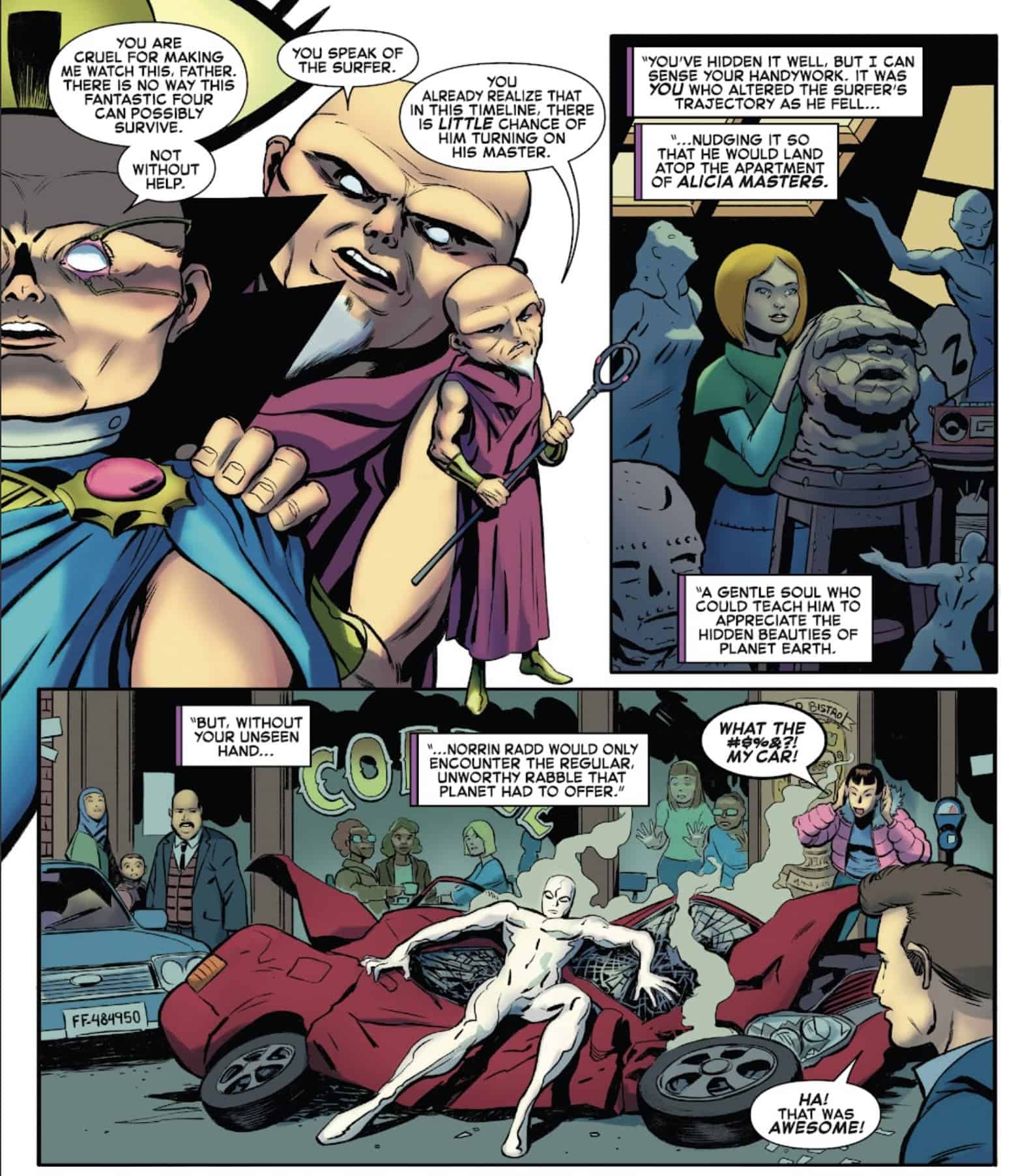 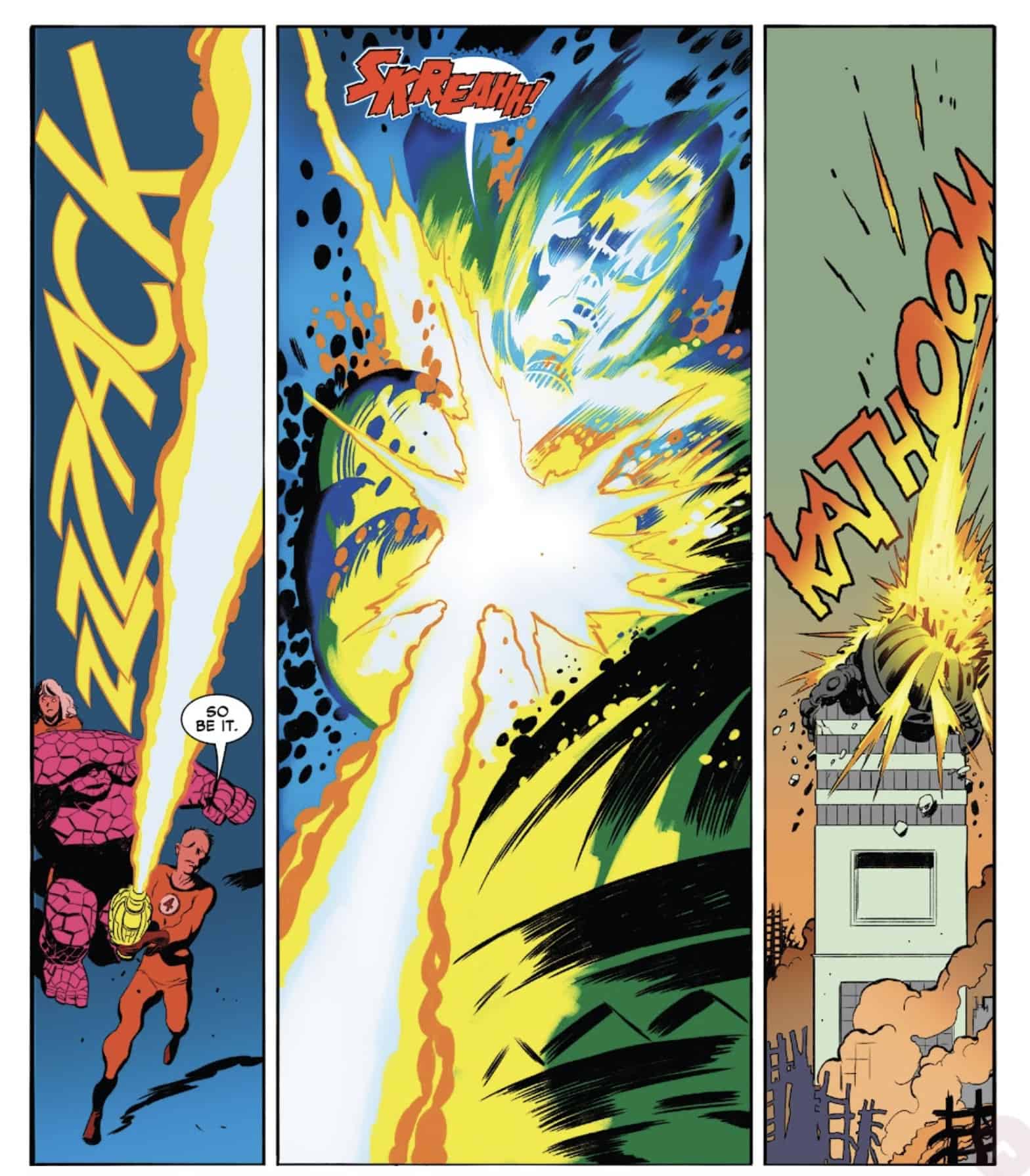 This, then, is the punishment of the Watchers.  Our Watcher will be forced to watch this “What If…?”, over and over and over again forever, and know that the Fantastic Four could have saved Earth from Galactus without him (while maiming themselves for life) and could have fulfilled Reed’s Utopian scientific vision in the process!  The Watchers’ punishment validates their oath of non-interference and endlessly tortures our Watcher for all the times he’s broken it.  Meanwhile, they still refuse to do anything about “the Reckoning.”

However, what the Watchers don’t know is that they are being watched.  Nick Fury, “The Unseen,” has been lurking about and witnessed this whole thing.  If the Watchers won’t intervene, Fury will.  But just what exactly will he do?

To be continued in The Fantastic Four!

The story we call “The Galactus Trilogy,” which introduces both the Silver Surfer and the planet-consuming Galactus, is one of the great game-changers of Marvel history.  Its influence on all the comic-book storytelling that followed it has been huge and endless.  This is the second time lately that it has come in for an alternate-history treatment.  Just recently the coming of Galactus was one of the major plot points in the history-warping Fantastic Four Life Story miniseries.  This overhaul of the story is much more entertaining than that one was.  It was a very clever idea to use the What If…? concept as something affecting a major storyline in the regular Marvel Universe.  By using a What If…? situation in this way, Dan Slott is able to go into the original story itself and play with the outcome, rather than use the looming threat of Galactus in a total reworking of FF history and having it play out for decades with extreme changes in plot and resolution.  This “Reckoning War” special turns out to be much more entertaining than the Life Story retelling exactly because it goes into the actual, original story and tackles it directly, head-on.

The art by Javier Rodriguez calls up a Silver-Age feeling.  While no one else can be Jack Kirby, it evokes the purity and sense of adventure of that period of comics in general and The Fantastic Four in particular.  The very different path that the plot takes provides some page-turning and heartbreaking surprises, as each member of the FF makes a disfiguring or disabling physical sacrifice to save the world, showing what kind of heroes they really are.  The most interesting alteration to history is what happens with the Silver Surfer.

While the original Fantastic Four #48-50 is my all-time favorite comic book story, I have always found it a huge coincidence that the Thing’s punch of the Silver Surfer in the first part just happens to knock him into Alicia’s skylight.  In this Dan Slott opus, it turns out not to have been a coincidence at all.  The Watcher guided the Surfer’s flight deliberately, wanting him to meet Alicia and wanting her to influence him to rebel against Galactus, and it worked like a charm.  It does, however, create a problem of motivation.  In the original Stan Lee script, the Watcher expresses trepidation over the Surfer becoming a “wild card” in his plan to defend Earth.  If the Watcher meant the Surfer to go rogue, why does it become such a dire concern for him when it actually happens?  By solving one problem in the story, Slott ends up creating another. 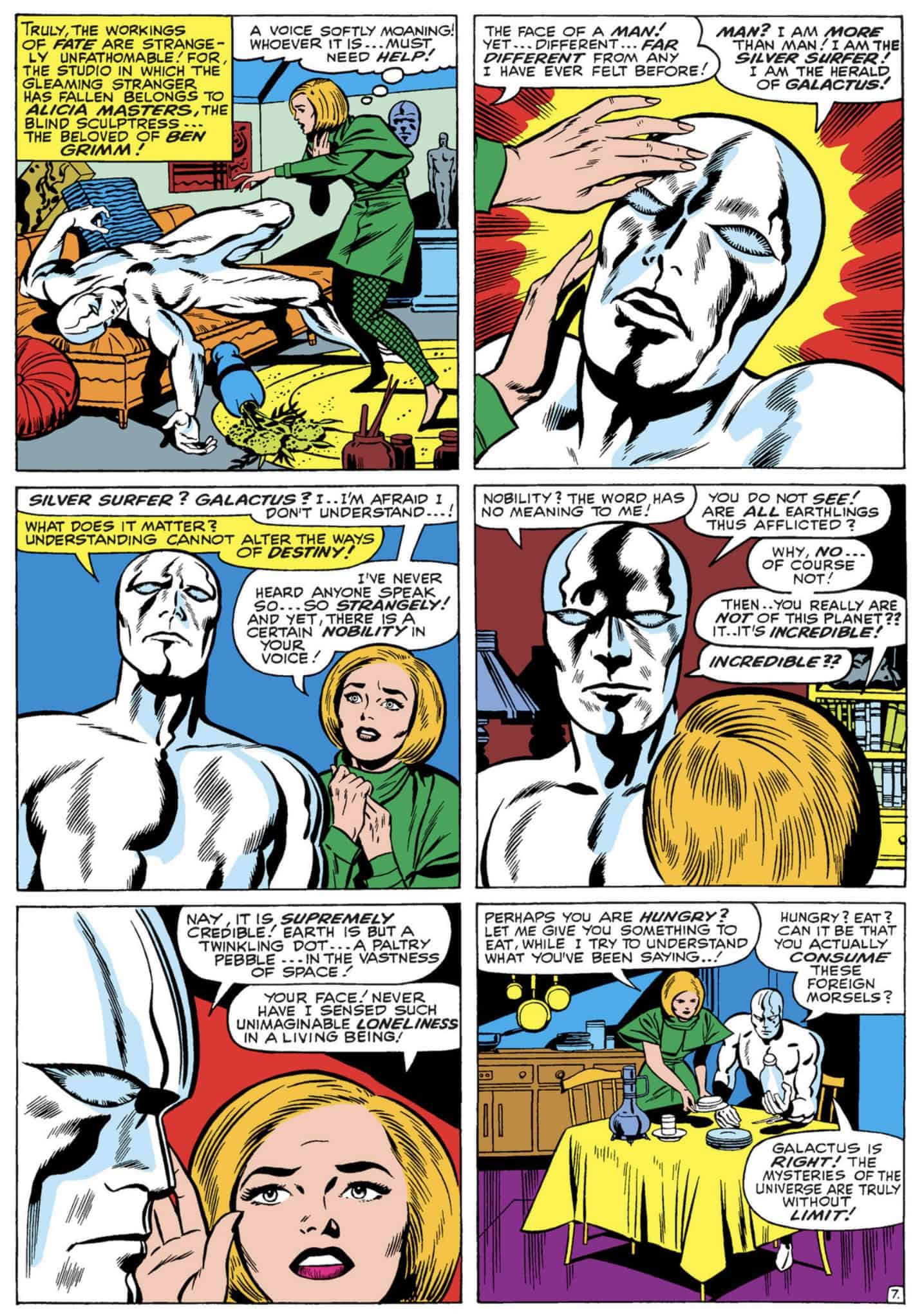 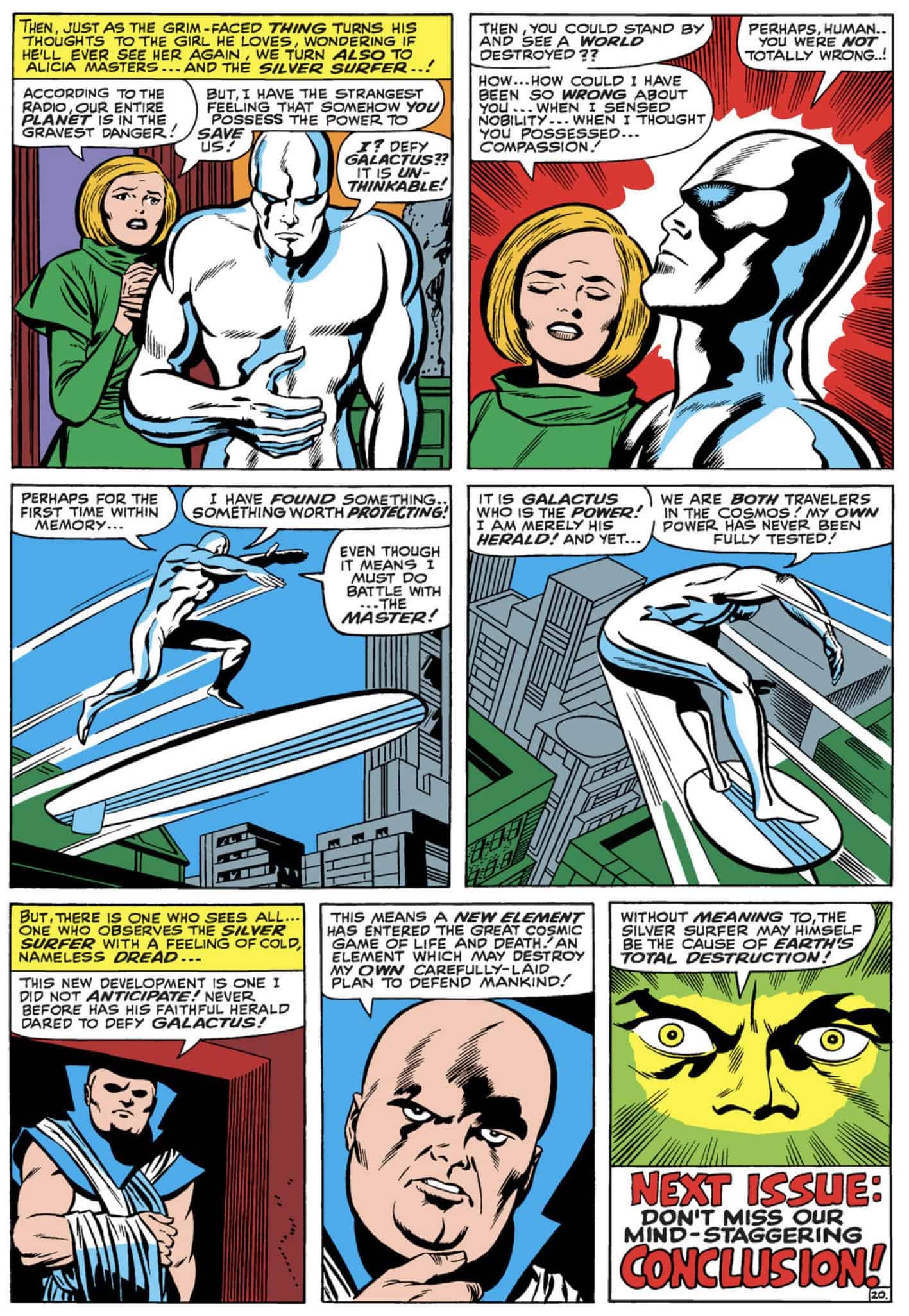 Nevertheless, the whole thing is actually fun to read, even with its bittersweet outcome.  The ending, with humanity praising the now deformed but triumphant FF and the world becoming the realization of all of mankind’s dreams, is a bit reminiscent of the end of Stan Lee and John Romita Jr.’s Last Fantastic Four Story.  And it certainly illustrates the nobility and the heroism of Earth’s greatest heroes.

As I noted at the beginning, what the Watchers do to our friend who formerly sat vigil on Earth from the Moon to punish him for his repeated violations of the oath makes me think of how the fictional legal system in A Clockwork Orange treated Malcolm McDowell’s character to make him averse to violence.  Will it work?  Will our Watcher come away from “The Reckoning War” incapable of helping the Fantastic Four or any other terrestrial heroes because of being made to watch the consequences of his non-participation on an endless loop?  Or will our Watcher renounce being just a Watcher and become a permanent rogue, estranged from his own people forever?  I look forward to seeing how this one plays out.

Dan Slott really shows his love of the Fantastic Four and its brilliant history with this very inventive tale.  Every hit that the members of the FF take to save the world is a personal blow to those of us who love them, and the Watcher’s agony over his recreational viewing of other histories being used against him is well portrayed.  This is a unique instance of a What If…?, which is usually no more than a storytelling exercise with no consequences on regular story, actually making a dent in continuity.  Very entertaining indeed.