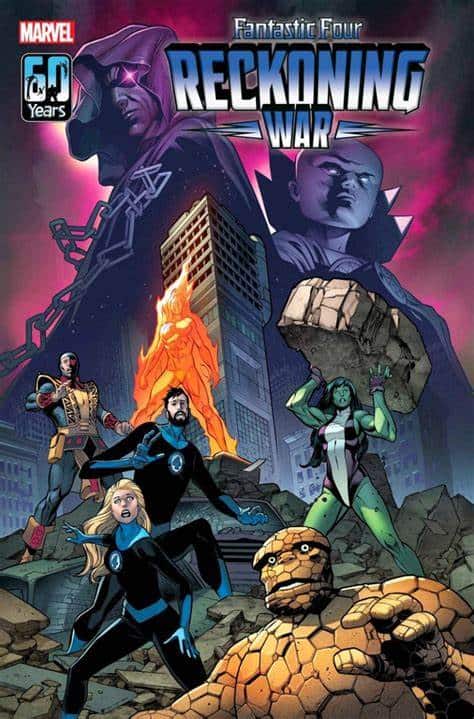 Just in time for that new Roland Emmerich movie, Earth is showered with pieces of a falling Moon.  The super-heroes of New York come out in force to protect the city, and fittingly, leading the way are the Fantastic Four! 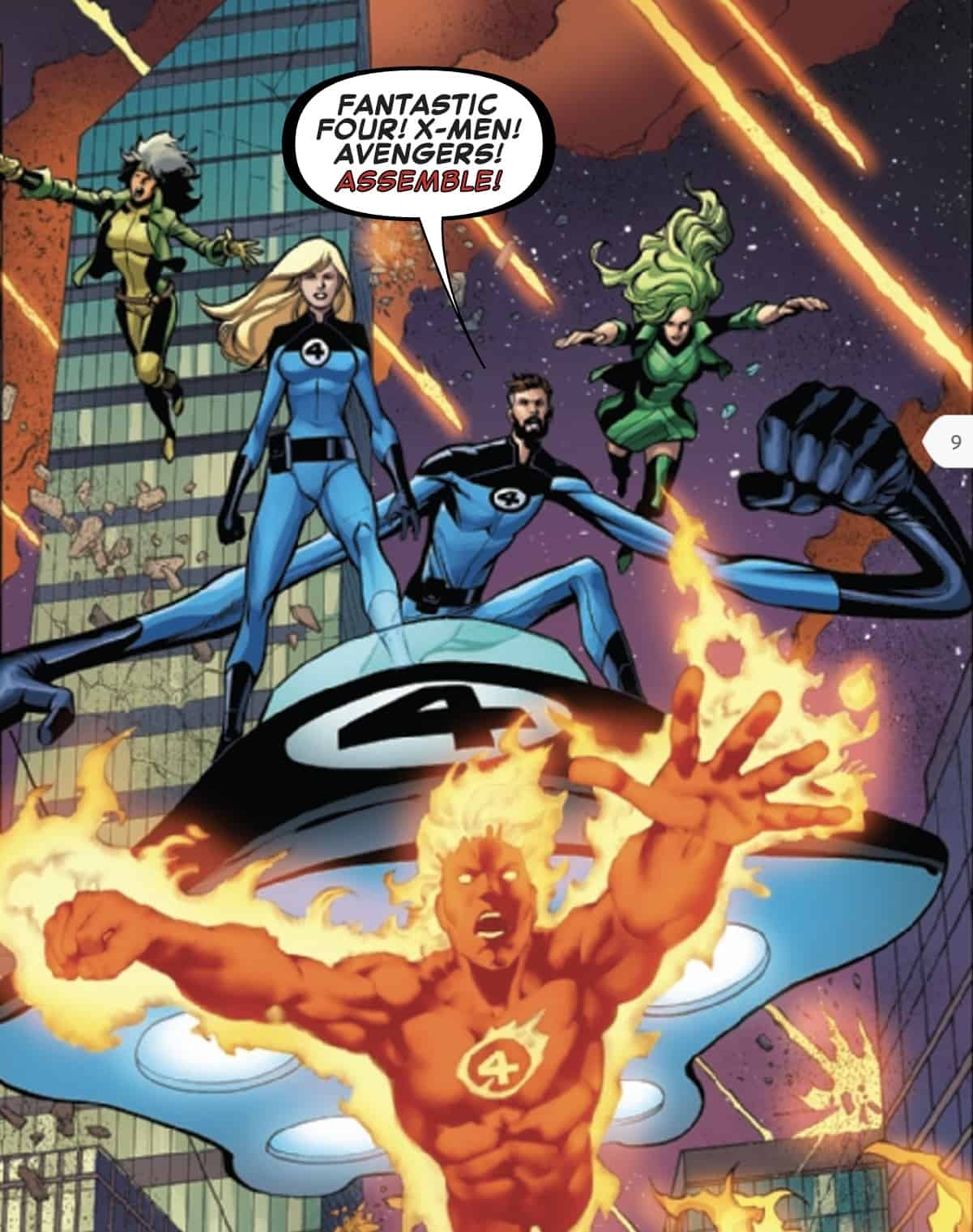 But just what is going on here?  Remember back at the epilogue of Empyre, when Nick Fury, “The Unseen,” became the cosmic foot-soldier of the resurrected Watcher?  And remember when they learned that the Cotati had been armed with weapons technology from the earliest history of the universe?  On a recon/spying mission for the Watcher, Fury found that someone has been going around the cosmos supplying such arms to a variety of species including the Brotherhood of Badoon and the Snarks.  When the Watcher tried to alert the rest of his people to what was happening, a ship of someone called “The Reckoning” opened fire on the Moon and blew it into asteroids.  Now, as pieces of the Moon rain down on Earth, our planet faces not only that disaster but also the attack of the Badoon themselves!

While all this is going on, She-Hulk faces members of the Time Variance Authority who inform her that for some reason she is responsible for the terrible thing that’s happening to Earth.  This harks back to a story from She-Hulk Vol. 2 #3, back in 2005.  This whole thing has been percolating away in the background of Marvel stories for years, and it goes way back even farther than it looks.  As the TVA retreats to Null-Space, another dire encounter is happening elsewhere in the universe. 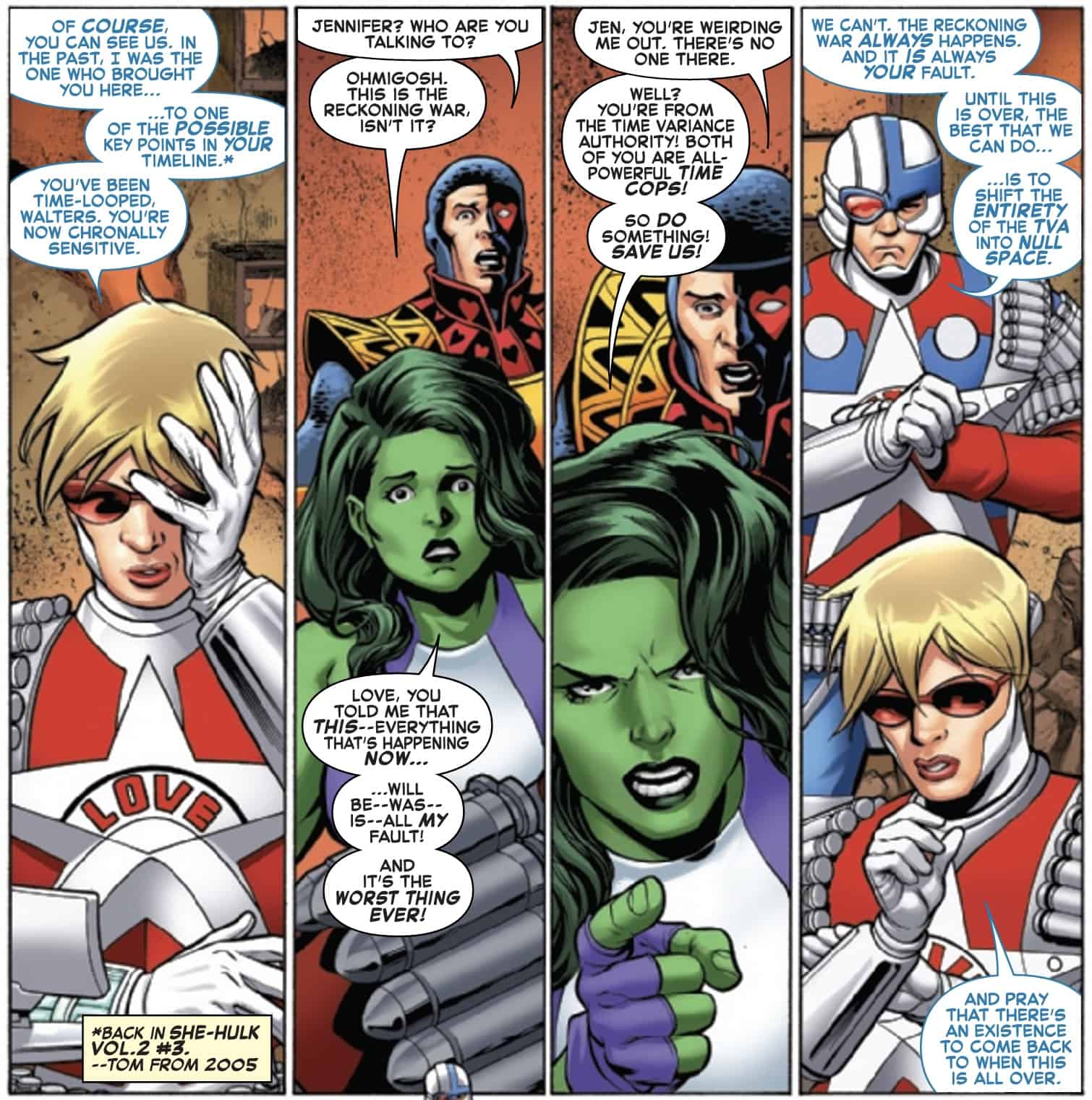 The Silver Surfer is suddenly confronted with the Griever at the End of All Things.  She has been drawn back here because this universe is ending, torn apart by war and devastation everywhere.  Accompanying the Griever is yet another abstract being, the Never Queen, lover of Eternity.  (How many of these characters who are the embodiment of ideas are there, anyway?)  The Never Queen, who represents possibility (if she’s about possibility, why is her name “Never?”), informs the Surfer that Eternity has been poisoned by this conflict and only one thing can stop it.  The Surfer must find and use…the Ultimate Nullifier!  Back on Earth, Dr. Doom realizes the meaning of the attack of the Badoon and leaves Victorious to protect Latveria while he speeds off to “save the very fabric of reality.”  Not too much pressure, then, is it?

After the Invisible Woman confiscates a Badoon weapon and Mr. Fantastic studies it and makes a similar realization to what Doom has learned, the Fantastic Four take off into space to find the Watcher.  What they find is Nick Fury, trying to attack the Reckoning and firing on the FF instead.  When Sue de-cloaks Fury and Johnny brings him aboard the FF’s ship, Fury reveals that the Reckoning was after a strange orb floating amid the debris.  Once they’ve recovered the orb, Reed accesses the Watcher AI that it contains and learns the story of the Reckoning.

In a nutshell, what the Fantastic Four are now facing is a spinoff of the origin of the Watchers from Tales of Suspense #53, which you can read all about in this Blog post:  https://cokeandcomics.com/tales-of-suspense-53-story-c/.  The Reckoning used to be the people of the planet Prosilicus, whom the Watchers—who weren’t the Watchers yet—once gifted with their technology.  The unwise Prosilicans used the Watchers’ gifts to attack other planets that the Watchers had thus gifted, plunging the early universe into “the First War”.  In the aftermath of that war, their would-be benefactors became the Watchers.  They took their oath of non-interference with other species and sealed off the Prosilicans from the rest of the cosmos behind a Great Barrier.  Having hooked up his mind with the Watchers’ equivalent of Google, Reed seems to have suddenly taken on Cosmic Awareness, while behind that Barrier, a being who calls himself “Wrath” plots his further assault on the Watchers and everything else in existence!  To be continued… 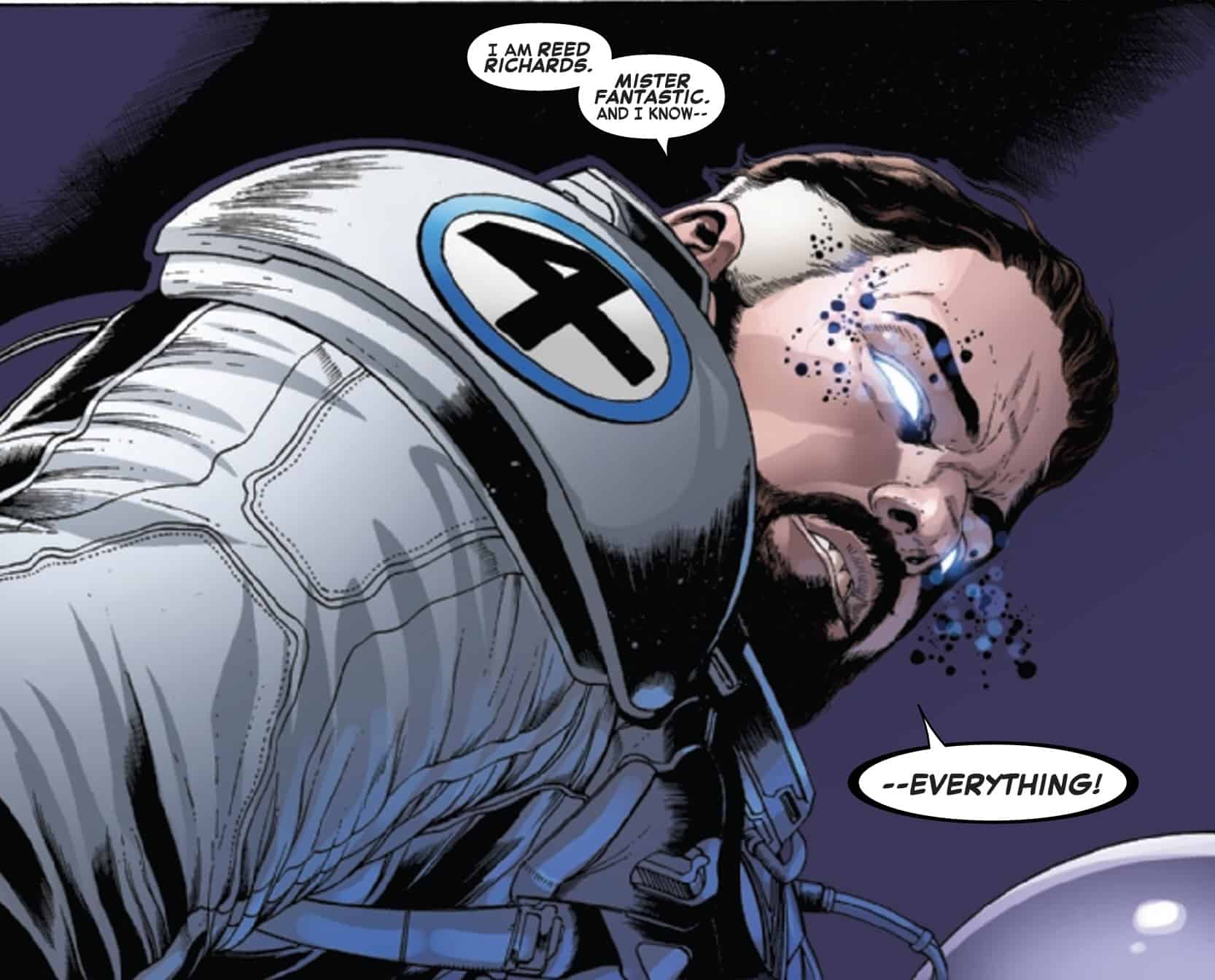 When they started hyping—sorry, I mean promoting “The Reckoning War,” one of Marvel’s talking points was that this story and this alien menace is one that stretches back to the earliest days of Marvel storytelling.  (Tales of Suspense #53 was released in 1964; its main Iron Man feature is a Black Widow story from the days when the Black Widow was a Communist villainess and wasn’t even wearing a costume yet.)  They proclaimed that the Reckoning was a threat that we’d seen before, which had become obscure and forgotten and was striking from the past.  At the time I was sure that I, an original Marvel reader, would recognize them when I saw them, and though I couldn’t guess who they might be, I’d be embarrassed when I saw who they were.  And I was right.

Had I really thought about it, I might have remembered that I have seen these guys, or at least the one story in which they appeared.  Every Christmas I used to get the Origins of Marvel Comics books that Stan Lee did.  It was in Son of Origins of Marvel Comics, the 1974 volume, that I first read the origin of the Watcher.  That “Tales of the Watcher” story first ran in The Silver Surfer #1 (1968) and was adapted from the earlier yarn in Tales of Suspense #53.  It made the Watchers and the intended benefactors of emerging civilizations in the Tales of Suspense story the same people, which was the beginning of this whole mess.  Dan Slott has been waiting to bring back the Prosilicans, who destroyed themselves using technology that the Watchers gave them before they were ready for it, and use them as a threat to the universe since he first read about them when he was eight years old!  He has been peppering his Marvel work with preambles to “The Reckoning War” for years, including that bit with She-Hulk, leading up to this yarn he’s doing now!  Talk about your long-term planning.

Well, I guess it’s nice if you can actually see your childhood dreams come to fruition as Dan Slott is doing.  Had Marvel’s editorship not seen fit to take him on as a writer, he would never have had the chance to bide his time and lay down his breadcrumbs for this story over so many years, and we’d be reading about some other calamity in the Marvel Universe now.  The supposed responsibility of She-Hulk for all this madness is another mystery.  How a lawyer turned gamma-empowered super-heroine is the cause of something that is threatening the existence of the universe has yet to be explained, but should be very entertaining.

A further mystery is why the FF on the cover of this book is outfitted in the black and blue uniform that they’ve been sporting for most of the current Fantastic Four series, which has become obsolete since they’ve gone to an update of the original Kirby uniforms.  Regardless, the good news about the art is that this intro to “The Reckoning War” is drawn by Carlos Pacheco, and is one of the best-looking Fantastic Four art jobs we’ve seen of late, even with that atrocious beard on Reed’s face.  With the constantly changing artists on the regular, main FF book, Pacheco is one of the handful of pencilers that I would welcome taking on “The World’s Greatest Comic Magazine” on a full-time basis.  The Fantastic Four needs a regular artist, and Pacheco is one who would serve very well in that capacity if they’d only put him on the job. 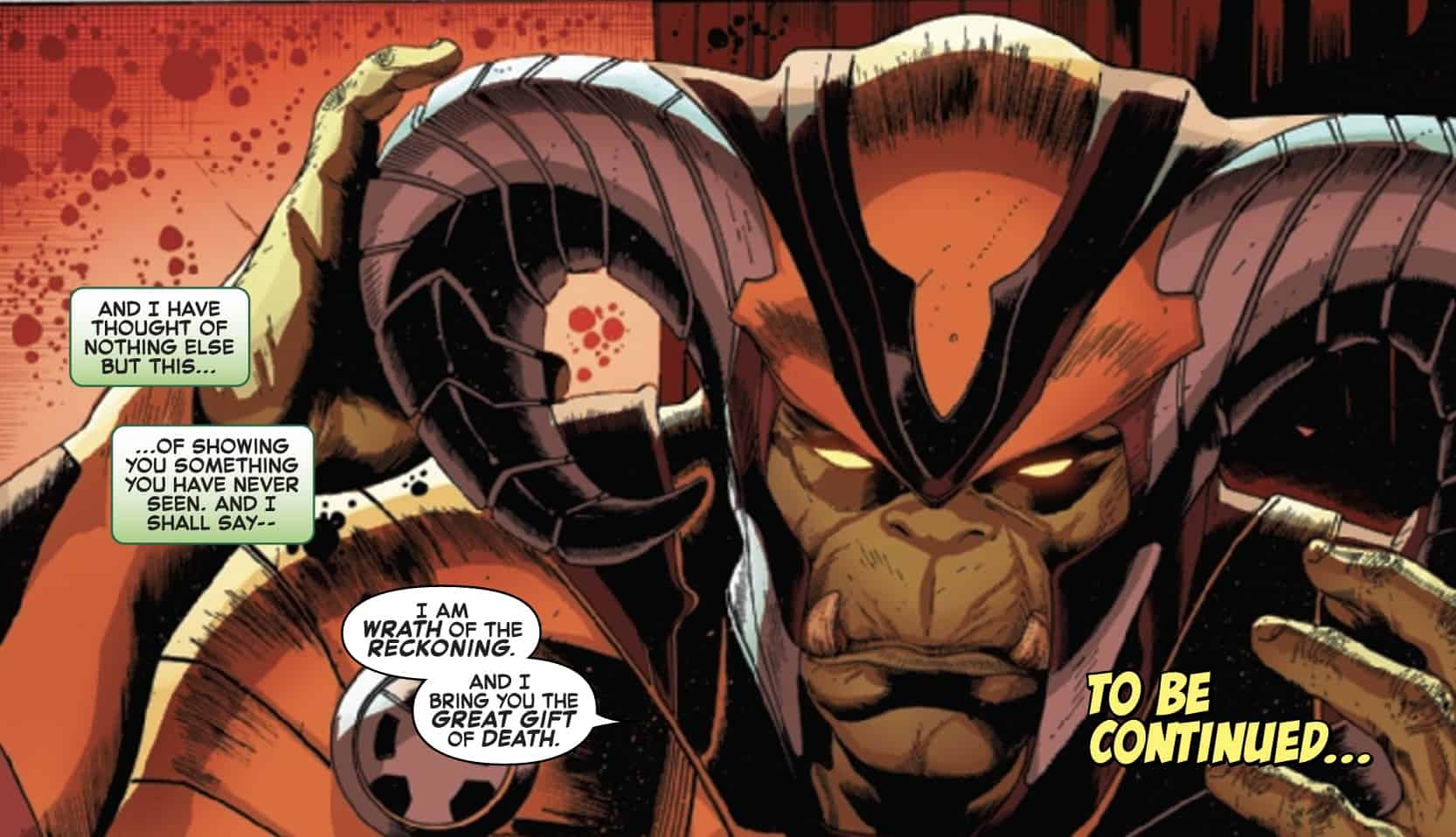 And finally, in all this drama and upheaval, no one has even begun to address the real dilemma that this situation creates.  Without the Moon, what are songwriters going to write romantic lyrics about?  Clearly, Dan Slott and the Marvel editors have not really thought this through.

Can the universe survive the wrath of “Wrath”?  Is the cosmically aware Reed really, finally about to shave off that damn beard, as the cover of Fantastic Four #40 seems to suggest?  Will the Silver Surfer really use the Ultimate Nullifier?  These questions and many others will apparently be answered in this year’s issues of the regular Fantastic Four comic!