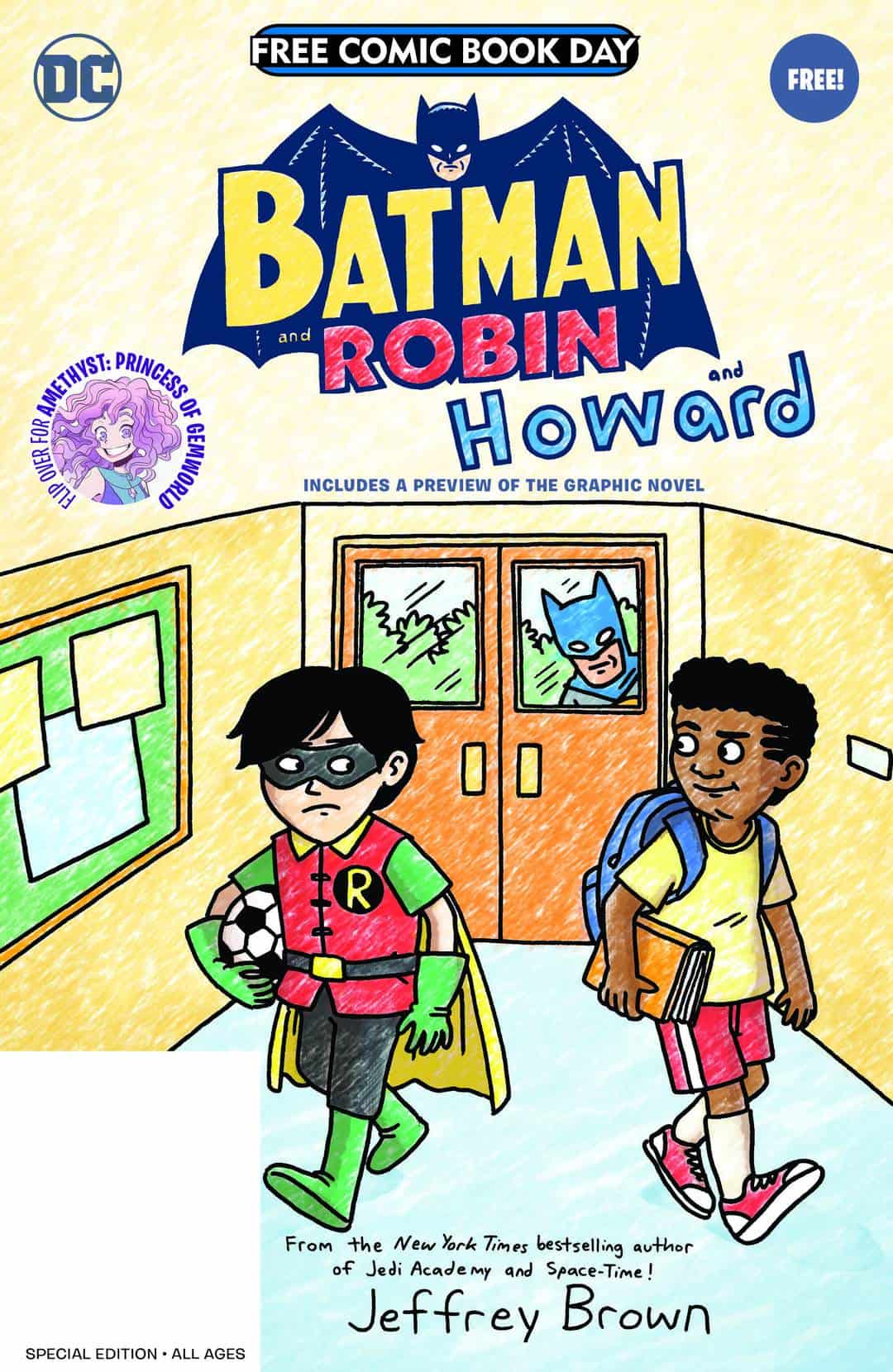 This book contains excerpts from two of the graphic novels DC is releasing for elementary school-aged children.

Because this book very cleverly packs two stories quite literally back to back, I’m going to structure this review in a similar way, by first reviewing the Batman section, then switching to Amethyst.

This story, by Jeffery Brown, is the beginning of a story that is probably meant to explore privilege, racism, and the importance of looking before you leap, but we don’t see more than the barest outlines of the story here. That’s not too surprising (it is a preview, after all) and not only are the characters presented in a fun, affable way, but the art will no doubt be appealing to the under-ten set.

This preview sees Robin (Damian Wayne) making a snap judgement about some people who need help. Batman decides that the best way to teach him responsibility is to enroll the boy into public school. This is the point where the story runs into problems. First, because a person of Wayne’s wealth dropping their kid off to school (in an implied lower/middle class area) in a freaking limo would definitely set up some problems.

Secondly the student who is being set up as Damien’s guide to understanding prejudice is a black child. This is intended to send the message that the presumed white audience should be more open minded about understanding people’s motives. I worry that it’s actually telling the black kids in the audience that it’s their job to reach out to, take care of, and mentor white children, which is nonsense.

The art is charmingly sketchy, very sweet in a cartoony sort of way that will definitely appeal to a child. Sylvana Brys’ colors add a lovely schoolhouse pop to the line work.

Overall, I was happy with this section, and I could see children enjoying the gentle narrative. That it’s bizarre to think of Damien in this sort of story is beside the point.

This story, by Shannon and Dean Hale, was altogether more successful than the first. It, too, examined privilege, and dealt with the idea of a fish-out-of-water protagonist entering public school with the plebs, but it did so in a way that wasn’t patronizing. This was probably because we were given a fuller look into the interior life of the protagonist.

The story was sort of a fairytale in reverse. It’s about a princess who breaks a rule, inadvertently harming her family, and having to atone for it by a stint on earth. And the colors and sense of adventure (there’s a freaking magic sword) will probably appeal to children in middle school.

The art, by Asiah Fulmore, was colorful and, like the story, a little more complex than what would appeal to kids in elementary school. Becca Cary’s lettering work stood out for me, in a good way, because I can see that it’s been carefully done.

I will probably read this graphic novel to my child in another couple of years.

These are two artistically different, but thematically complimentary stories, well composed and beautifully illustrated, that will definitely appeal to young children.