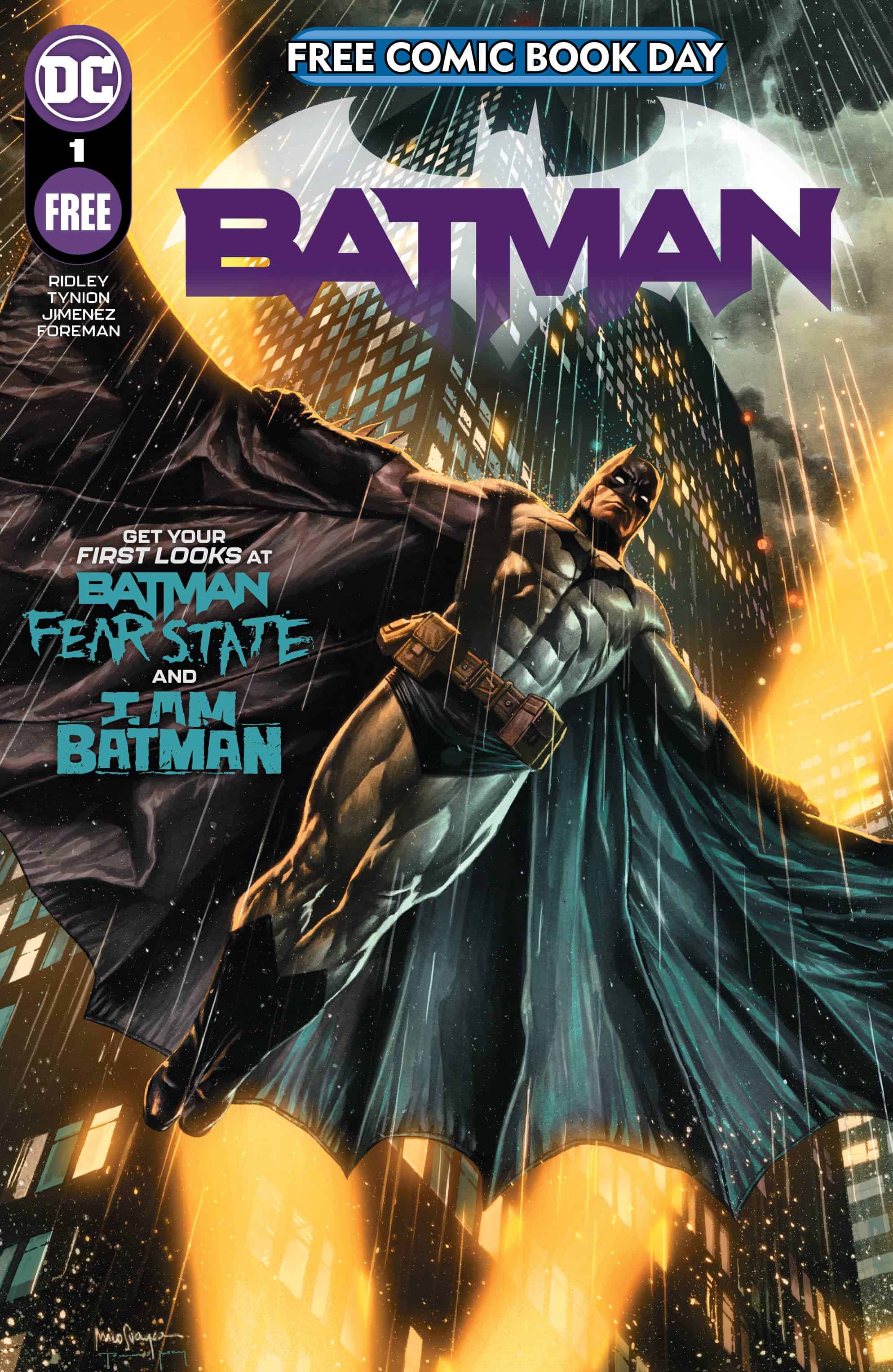 Free Comic Book Day has arrived again! This year we have a preview of the upcoming Batman event, Fear State, brought to you by regular Batman team James Tynion IV and Jorge Jimenez. Also included, a preview of I Am Batman #0 by John Ridley, Travel Foreman, and Norm Rapmund, which continues the story of Jace Fox, The Next Batman.

Ah, Free Comic Book Day. Every year (…usually) when this day rolls around fans are treated to several, as the name implies, free comics. In recent years, at least, those comics have generally been previews of incoming storylines or new series – something to whet the appetite and let people who would otherwise be reluctant to spend money on an unknown sample the wares for free.

This year is no different as DC makes use of the Free Comic Book Day Batman special to preview two major books that will be hitting the shelves soon.

First up, we have a preview of Batman: Fear State, the upcoming Bat-office wide crossover event series writer James Tynion IV has been building to for some time. Here joined by his regular Batman cohorts Jorge Jimenez, Tomeu Morey, and Clayton Cowles, Tynion delivers a chilling follow-up to the various flashforwards from the past few issues of Batman, with Bruce’s fear-toxin-induced breakdown intercut with Simon Saint’s pitch for the Magistrate.

As is the norm with Batman these days, the artwork is top-notch. Jorge Jimenez and Tomeu Morey are masters of their craft. The Scarecrow has never really been frightening to me until Jimenez’s recent design – now he looks like walking nightmare fuel, as he very well should.

In addition to the eight-page preview, there are two pages of Jimenez’s character designs, including colored rough sketches for several new characters plus Poison Ivy’s redesign as Queen Ivy. A short piece follows with commentary by Tynion about his thought process and goals for Fear State. Also included are quick blurbs from the writers behind each of the various Gotham books involved in the crossover discussing their approach to the event and what role their book plays in the event. Finally, there is a handy checklist of involved issues. It looks like Fear State will be running through November with a final one-shot, Fear State: Omega #1 in December to finish things off.

That finishes off the Fear State portion of the issue. Last but by no means least, we have an eight-page preview of I am Batman including pages from issue #0. This issue is actually out this week as well, so I’m not going to go too in-depth on it, but if you’ve been enjoying Jace Fox’s adventures it’s worth picking up. This is where Jace begins his path toward the main bat-title line, beginning with his investigation of one of Batman’s old power suits.

It should go without saying that John Ridley is an excellent writer, and Travel Foreman is an excellent artistic partner for him. Per the checklist, I Am Batman will be joining the Fear State event, as well so don’t sleep on it if you intend to follow the event.

Overall, the Free Comic Book Day: Batman Special Edition is a fun and interesting look at what’s to come in the Batman line for the remainder of this year or most of it.

All that said… I’m not sure how effective this approach to Free Comic Book Day is for drawing new people into comics. It seems as though it might actually confirm Western Comics’ reputation for impenetrability when even freebies meant to draw in new readers are used to wrap up stories that new readers won’t have read yet, or set up stories that are about to begin. I wonder if it would be more effective to have a stand-alone story that someone new to comics could pick up and read to get to know the form without needing to have any prior knowledge.

Just some food for thought, I suppose.