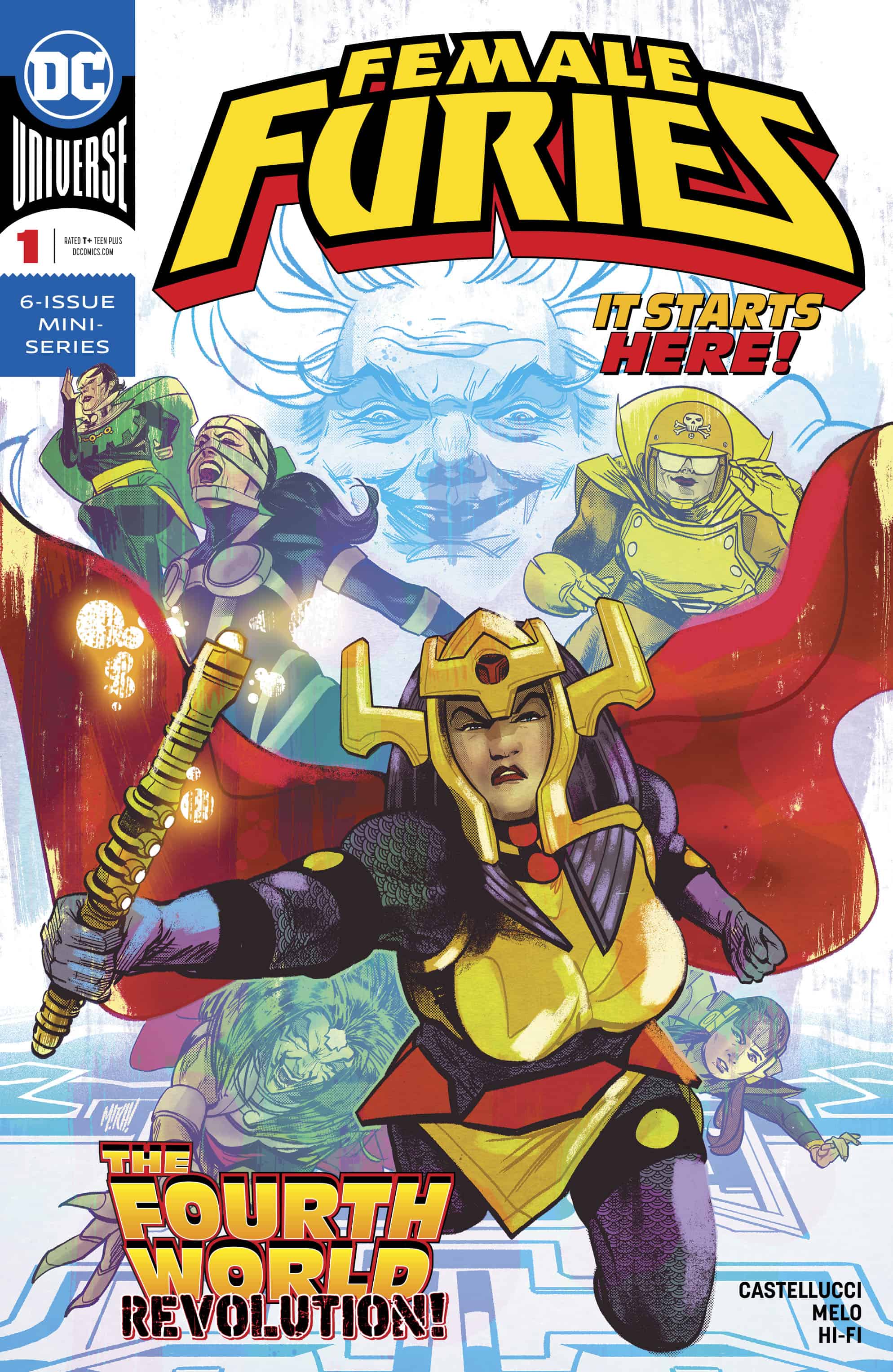 Female Furies, set in the Fourth World corner of the DC Universe, tells the tale the eponymous leads but also their leader, Granny Goodness's, rise to power in the past - or her attempts at rising to power, anyway. Although Granny plays a key role in overthrowing Darkseid's mother Heggra...

...She never gets her due among the hierarchy because of her gender. She's worse than an afterthought to them... she's a joke. 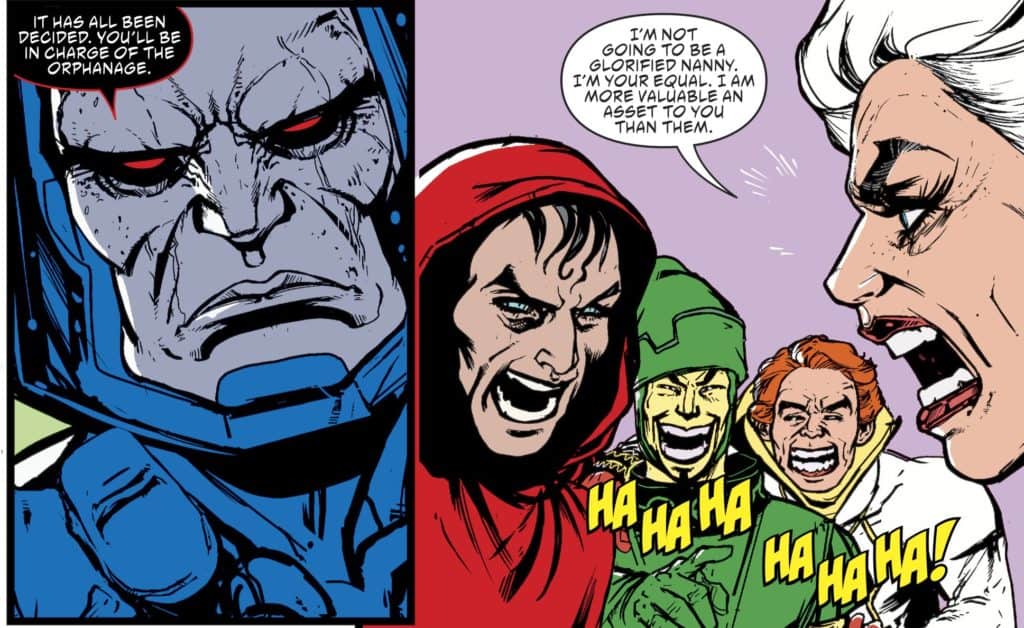 But Goodness knows Darkseid respects power more than anything else, and so she dedicates herself to proving her worth through her elite female fighting brigade, the Furies. But even as the years pass, they're never good enough to join the front lines of Darkseid's armies, no matter how hard they train. Eventually, though, one fury manages to stand above the rest: Aurelie.

Aurelie's skill in combat is enough for Darkseid to grant the Furies a further audition for a greater role in his armies, one that is met with humiliation and spite. More insidiously, though, Aurelie has caught the attention of Darkseid lieutenant Willik, who has far more devious intent toward her than anyone realizes...

Female Furies a comic that is not subtle in its themes: feminism, the patriarchy, and women’s roles in society are all a part of its mission statement. None of which are bad things at all. The problem lies in their execution: writer Cecil Castellucci wields those themes like a bat to the back of the head. And then the front.

It’s noble to want to tell a tale of women rising up and claiming their own lives and stakes in society, and themes of equality – be they gender, race, religious, et al. based – should always have a place in our culture, lest we forget the lessons to be learned from them and slouch into the shadows of base tribalism. But writers and artists of all stripes also have a responsibility to handle them with care, or they run the risk of being a caricature of the very thing they’re supposed to be shining a light on. In his eagerness to write a tale about empowered women, Castellucci seems to have forgotten that.

Take, for example, Darkseid’s “second phase” of the Furies’ audition: 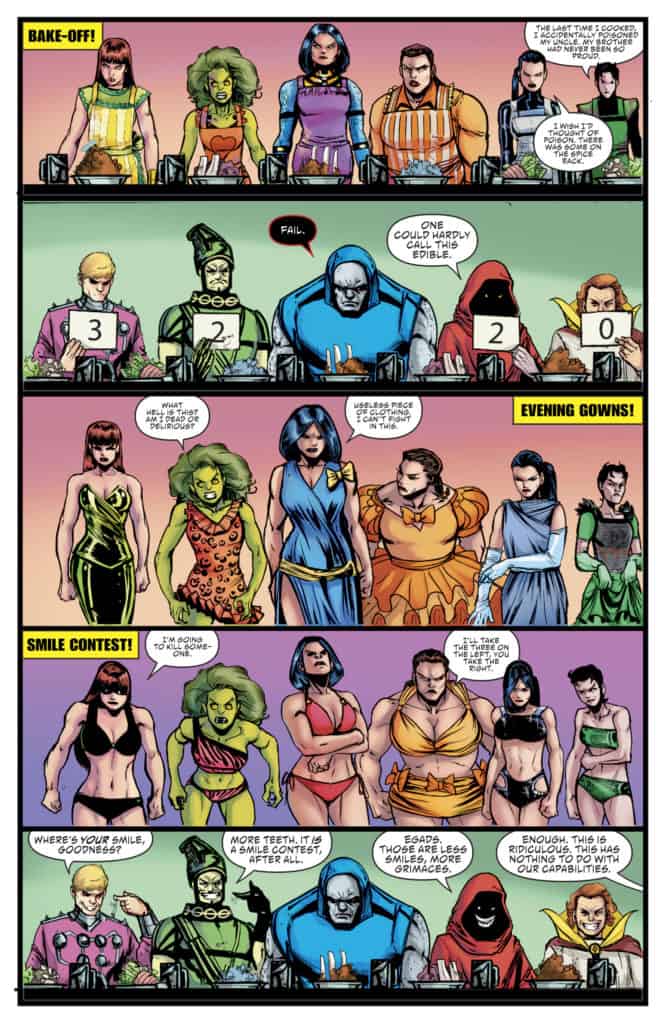 Is this a joke?

By going so far over the top, and by constantly rendering all male characters to either sexual predators or leering jackasses, Castellucci destroys his own argument by being so small and petty in his portrayal of males. Not even mighty Darkseid is immune: after he assumes control of Apokolips, Darkseid finds himself “hungry for what food cannot fill.” He corners Goodness and uses his newfound authority and her own desire to move up in the ranks to pressure her into sex. And then when she wakes the next morning, it is of course to an empty bed. That’s right: Darkseid is reduced to a booty call.

The story has some interesting themes: I enjoyed the idea of palace intrigue among the court of Darkseid’s lieutenants (even if it’s handled clumsily and one-dimensionally: women good, men bad). And I like seeing a younger Granny Goodness, just as evil but not quite as jaded and even a kind of innocent in her naive belief that if she just proves herself enough, Darkseid will treat her as an equal. It fleshes out her backstory and gives her believable motives.

Castellucci also alludes to military rape in the very intense “training” scene between Willik and Aurelie. Unlike earlier portraits of gender-based degradation, this is handled with all the due seriousness the subject deserves, and the writer deserves credit for that. This is the type of seriousness the entire issue should have been written with in mind, rather than the hot-and-cold slapdash approach it favors. 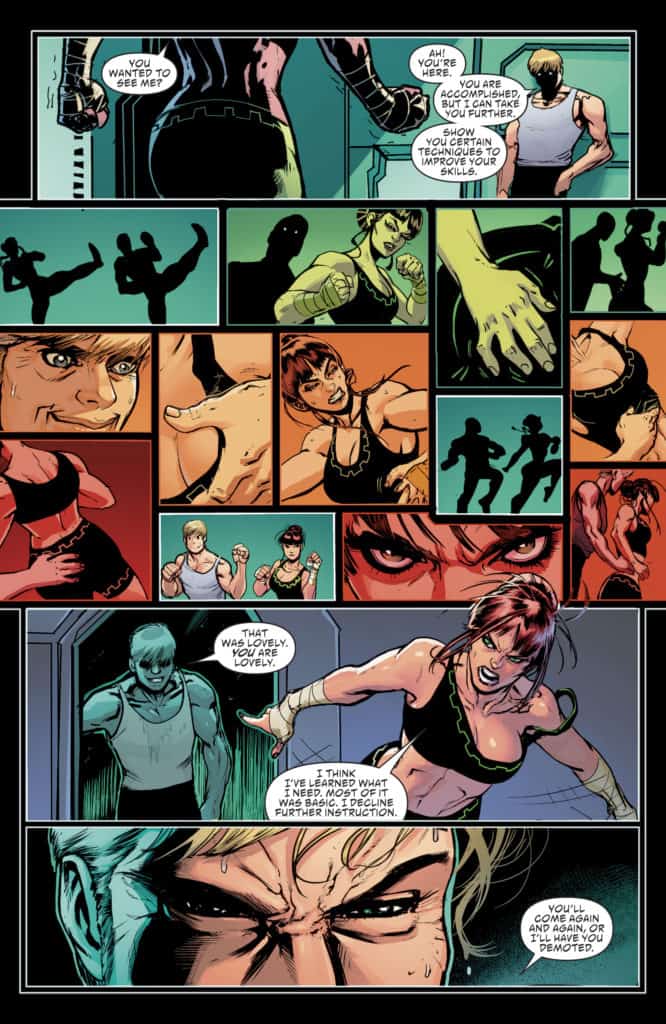 That’s intense, and it should be. It’s a serious subject that needs to have a light shined as brightly as possible on it, even if it’s “just a comic book.”  If only Castellucci had been this tonally consistent throughout the entire comic, it would have the markings of a must-read. Instead, it’s just a colossal swing and a miss.

The art, too, is inconsistent. Adriana Melo’s linework has a Steve Pugh-esque quality to it that sings in certain panels, but reflective of the story it’s illustrating, isn’t consistent throughout. Some panels have a rushed quality to them that distracts from the story. Barda, in particular, looks completely off-model. 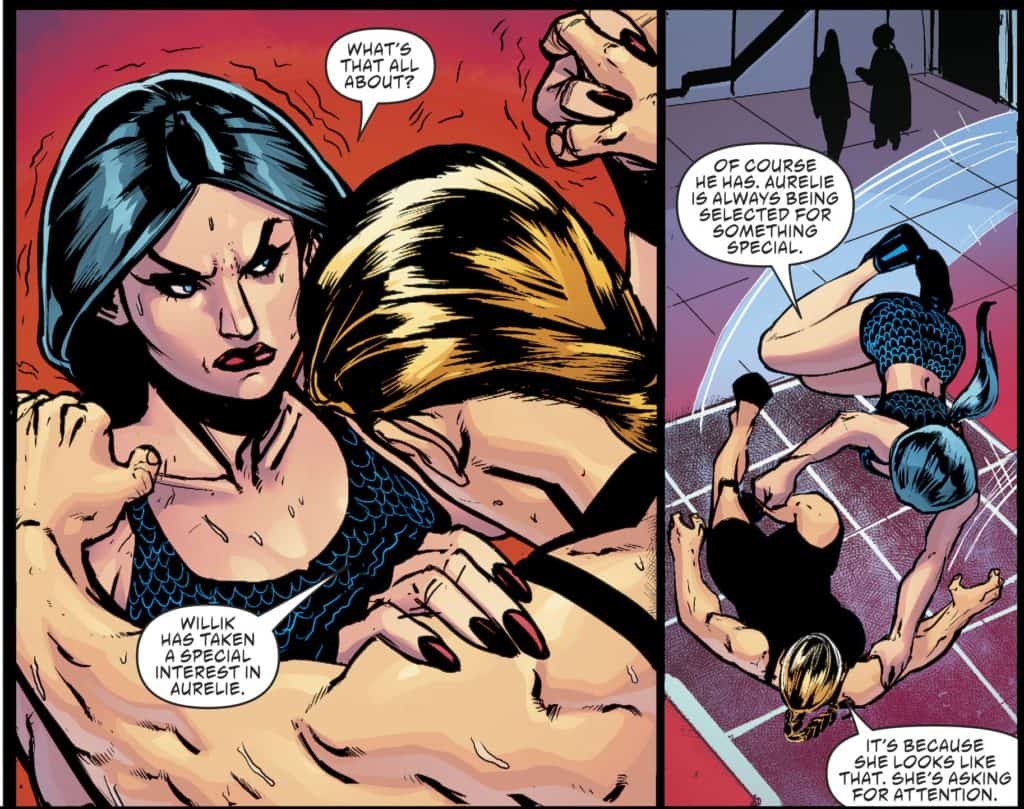 And what of Barda? For someone who’s front and center on the cover, she’s barely a supporting character here. The leads are unmistakably Granny Goodness and Aurelie, but to look at the cover, you’d never know that. I suppose that can be chalked up to marketing since Barda is the most well-known member of the Furies, but an undiscerning reader might be rudely surprised – especially since the recently-wrapped Eisner darling Mister Miracle‘s own Mitch Gerads himself provided the cover art. Marketing synchronicity, indeed.

Female Furies wants very, very desperately to be A Very Important Comic. Unfortunately, bizarre shifts in tone, an inability to take its subject matter seriously in a consistent manner, and a tendency to reduce all its male characters to stock caricatures sap it of any potency it may have had.