Firefly #8: Never Judge a Book By His Cover 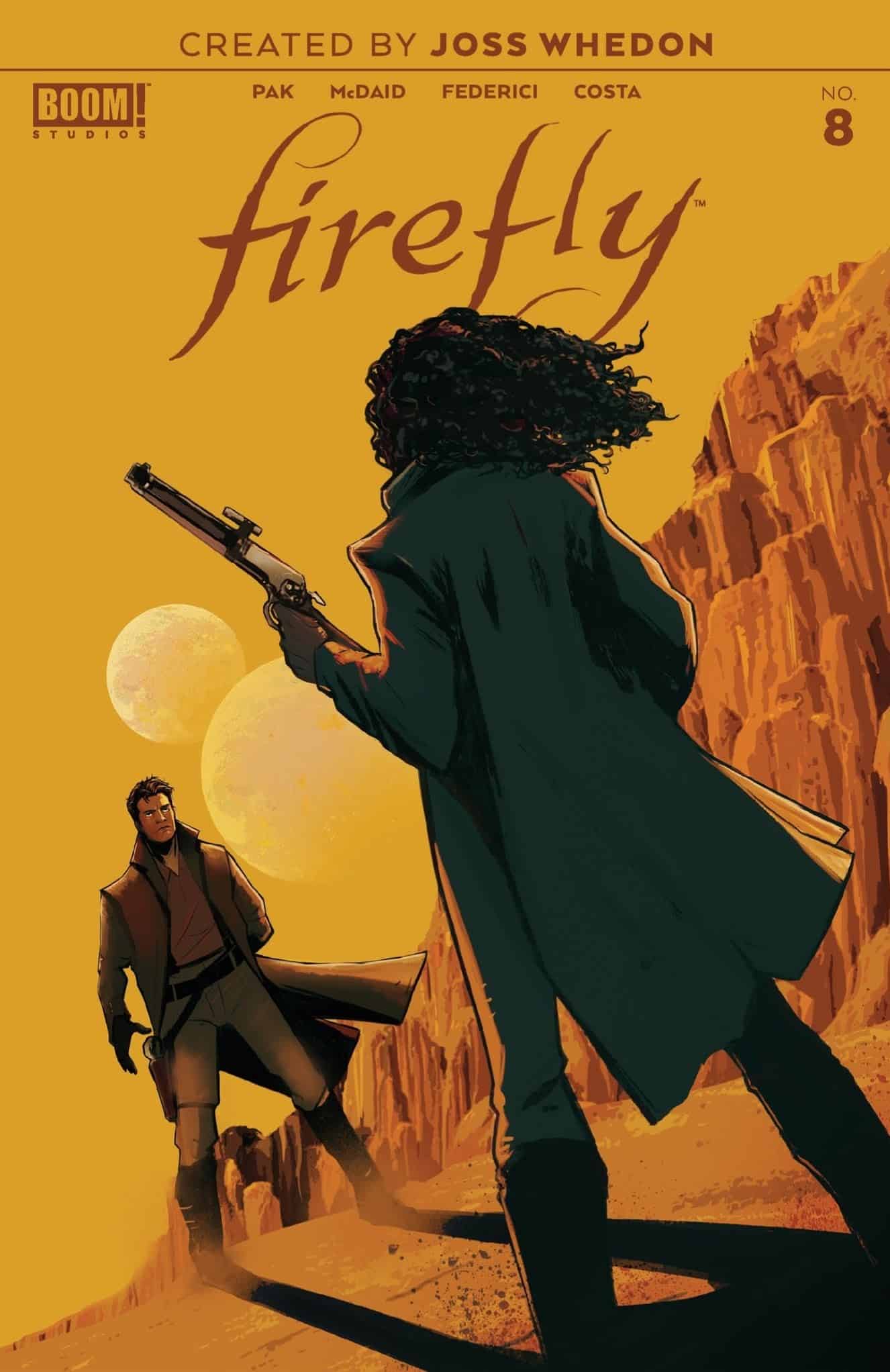 As Inara employs her usual subtle method of information gathering from the Governor of New Magistrar, Mal and newly appointed frienemy Boss Moon encounter some difficulties as their attempts to rescue the occupants of an Alliance outpost from an attack of ‘Crawlies’ result in them both ironically managing to get arrested. Kaylee and Leonard break Tam and Simon out of jail but are reluctant to take Jayne with them, due to his attempting to sell out the Tams….again!! But he is also freed by more Browncoats after being mistaken for Wash, the same case of mistaken identity that got him arrested in the first place. 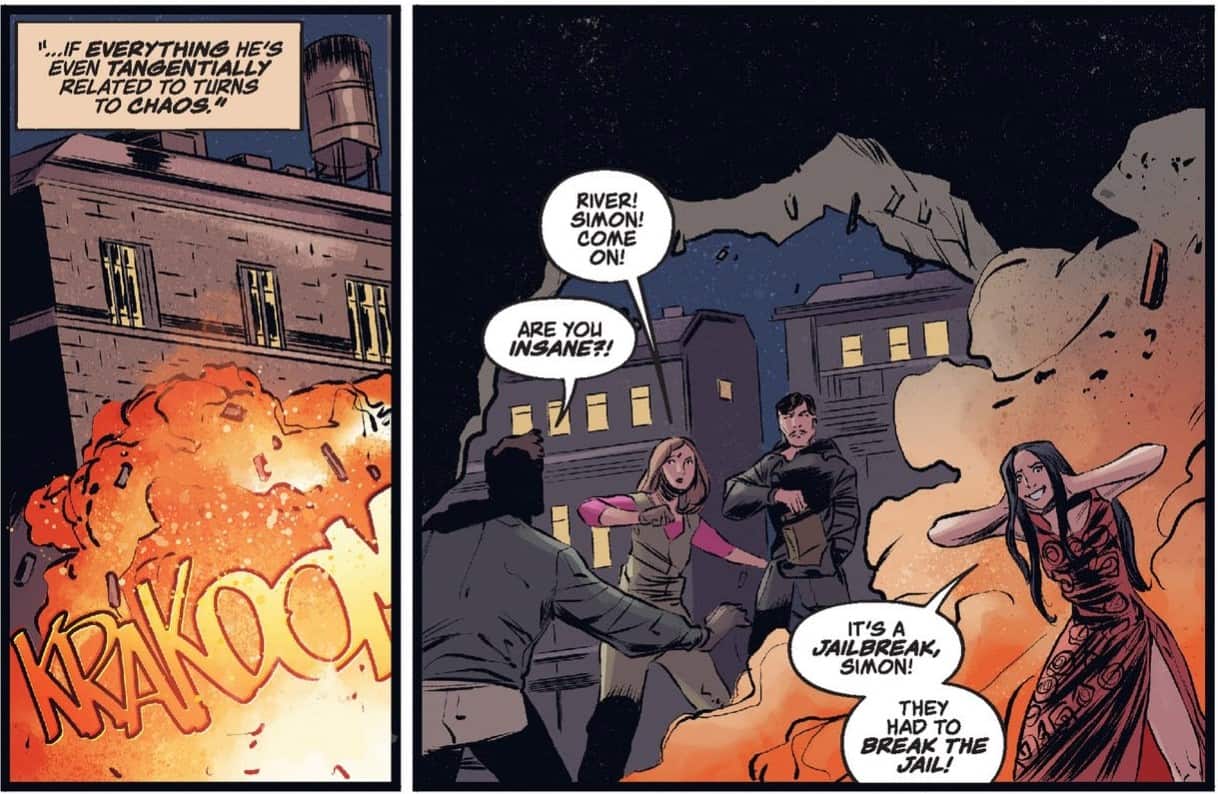 However the real Wash and Book busy themselves trying to get to Zoe to warn her that her new allies are going to get her into more trouble than she can handle. Which brings us to Zoe, who has her own problems. Attempting to save Mal with some Browncoats, she discovers her new crew are using her as a figurehead in an attempt to start a new Unification War, just as she is rumbled by members of the Alliance...who have some news for her, as well as an offer she can’t refuse. 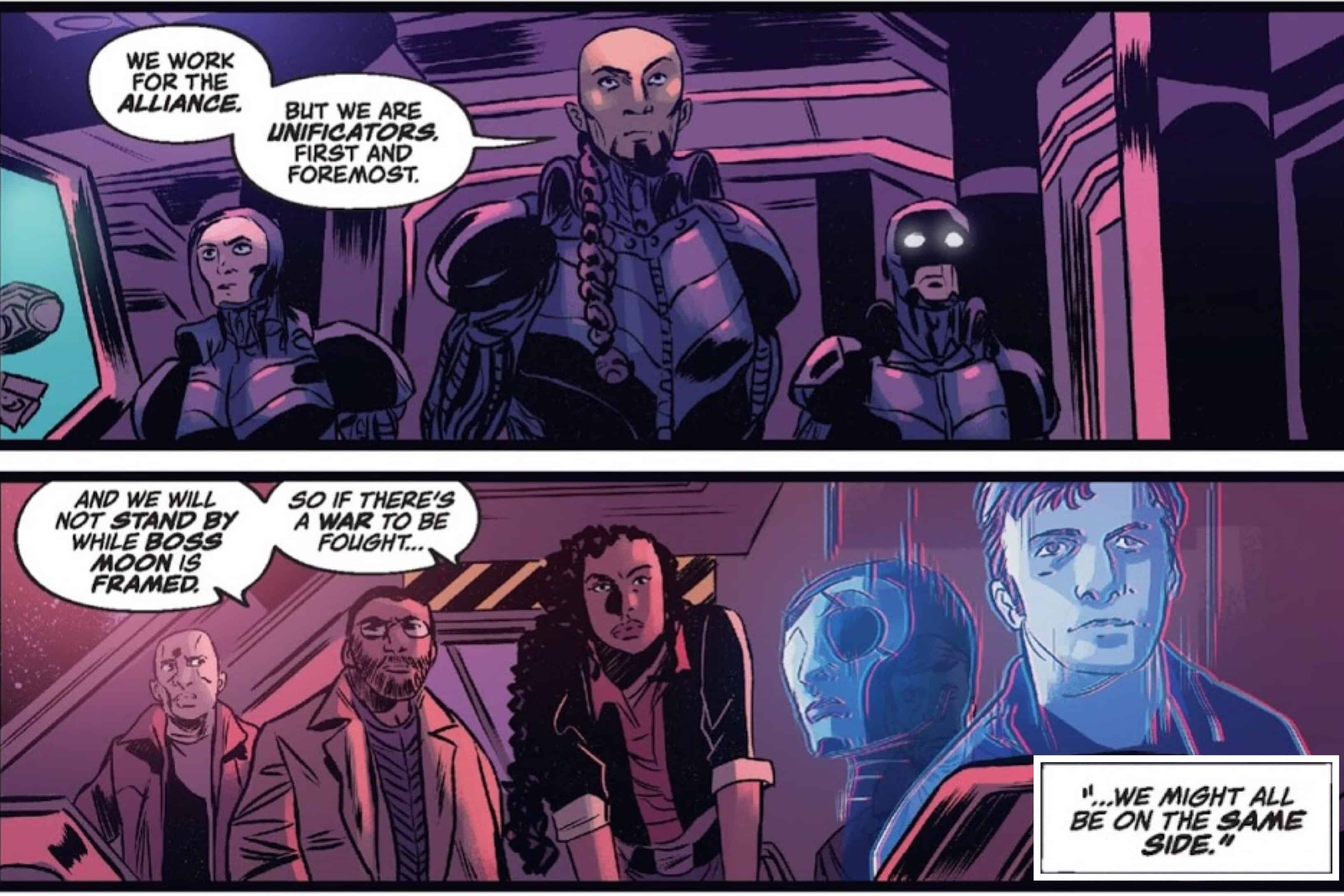 Characters & Writing: Usually within the world of the Serenity crew there is one mission statement and the gang get split into maybe two teams, with a couple of separate yet interlinked goals in a simple plot with inevitable complications. But this time there are several things going on, with so many cases of mistaken identity, changing priorities and allegiances it could become dizzying. And I didn’t think even Greg Pak could keep so many plates spinning. How wrong I was. Even though there was SOOOO much happening it wasn’t difficult to keep track of events and who is doing what. The main thrust of the drama is of course what is happening with Mal and his enemy turned friend, which is as hilarious as it is chaotic. And the payoff at the end of their shared status as wanted criminals could have implications in the future for Inara as a competitor for his affections. 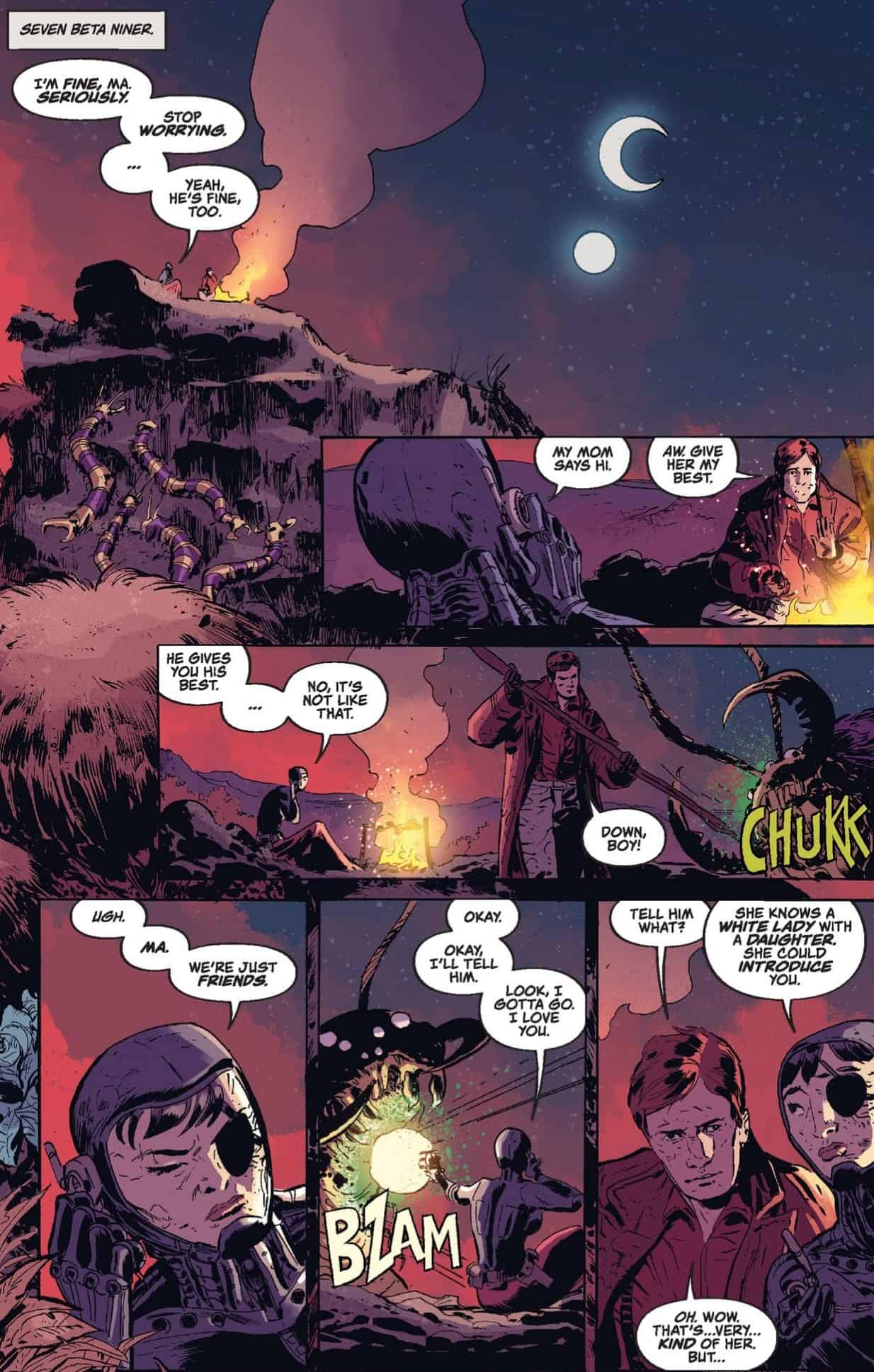 And we also get The Mal and Moon show, as she has to deal with a humorous call to …her mother?… and hilarious misunderstanding hilarity ensues. Set as it was right before the chaos and drama of their arrest, it lent an air of absurd humour as she has to explain their relationship in a true pushy parent pastiche. No matter how seemingly misplaced it was it touchingly managed to fit in. And more Whedon style fun was to be seen during the prison break. I love how River is her splendid self, bananas and gleeful even in the midst of all the chaos. And once more we get refrains of the Ballad of Jayne Cobb and hints of Canton, as the Browncoats mistake him for their hero. 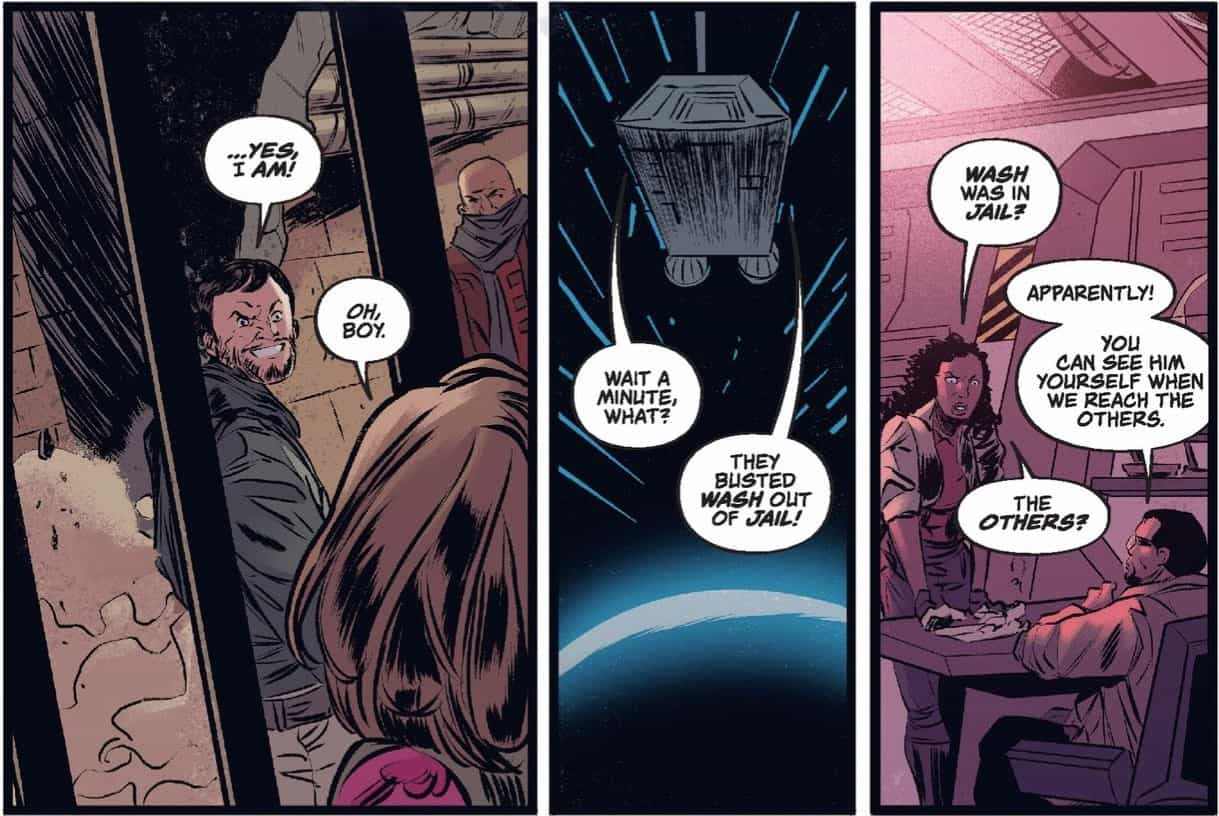 Fractured as they are the crew of the Serenity are still on plan and working to get each other back in their rightful place by each others side, one way or another. As usual the whole band of miscreants bite off far more than they can chew and as usual they all go hell for leather anyhow. And it couldn’t be a more true to form set up. The characterisation of each and every one is spot on. And although Inara and Wash as the paramours of our illustrious leaders are a little underplayed here, what we see of them is perfect nonetheless. Inara is as nonchalant as ever of the unfolding drama and making her usual observations about their illustrious leader. And Wash is suitably outgunned, but still fiercely protective of his woman. Even though we all know she will probably end up being the one to rescue him later. And the added treat of seeing Book get in on the action, showing his mean side. And I do so love seeing the glimpses of whatever it is he used to be before joining the gang. 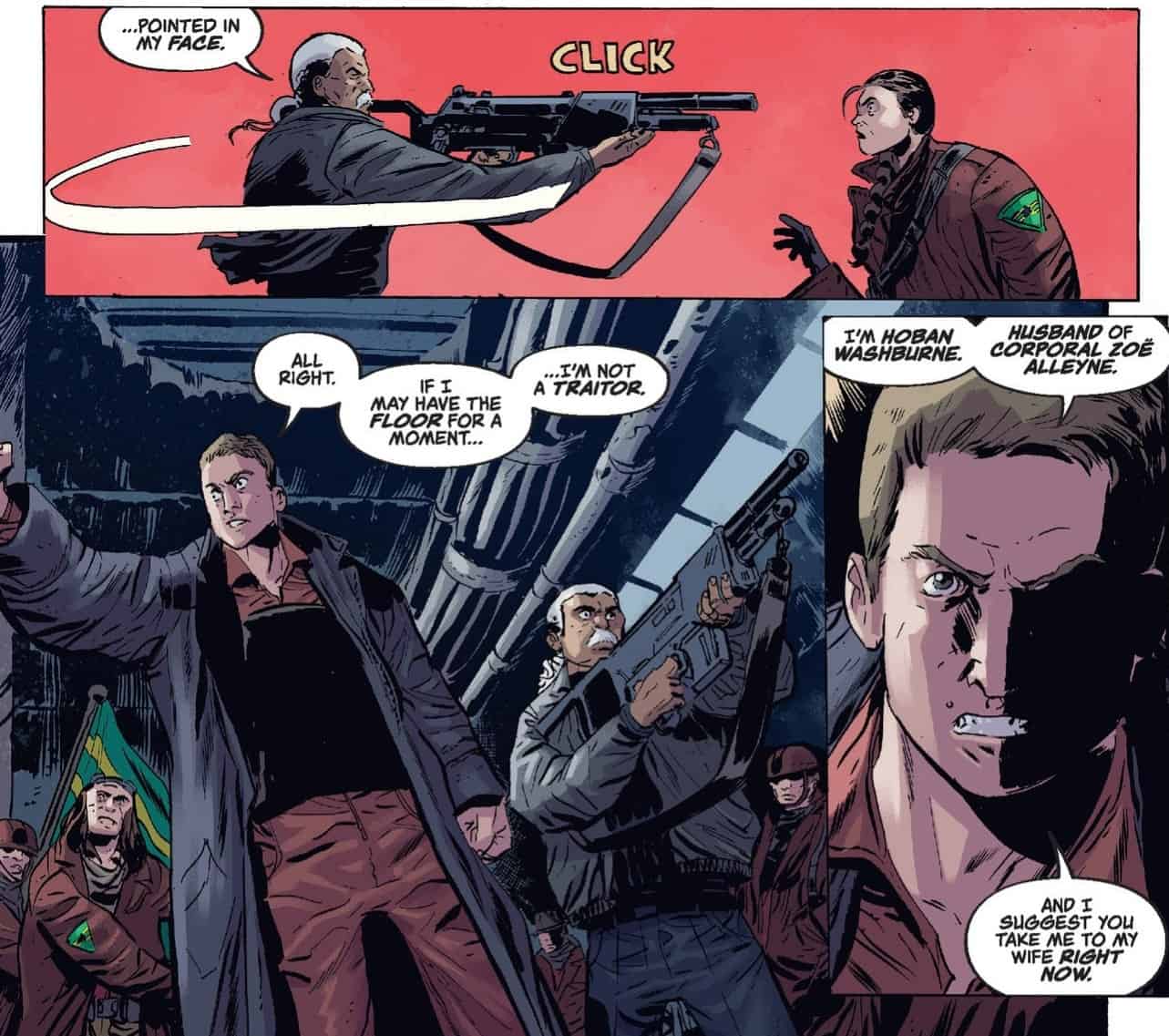 Art: And the artistic team are as much on target as the stars of the story, ensuring the visuals were perfect for the ongoing drama and matched the sparkling and witty writing style. The pencils of Dan McDaid are as suitable for the ongoing saga as you could wish for, lending the still moments some depth as well as the full on action scenes, and Vincenzo Federici’s inks add the right texture needed in making these pop visually. Topped off with the colours of Marcelo Costa, which also gives the perfect realistic flavour to the world our crew are living in and lend it that gritty earthy air, with panels that followed the thread of the action fully and gave it a natural flow. As well as giving the full on action sequences some kinetic energy, they relay the full impact of the drama perfectly and focus perfectly on the resolved faces of Book and Wash, giving them truly believable emotion. Not to mention as the action switches to tense drama in the standoff after the dust settles and the arrest of Mal and Boss Moon. 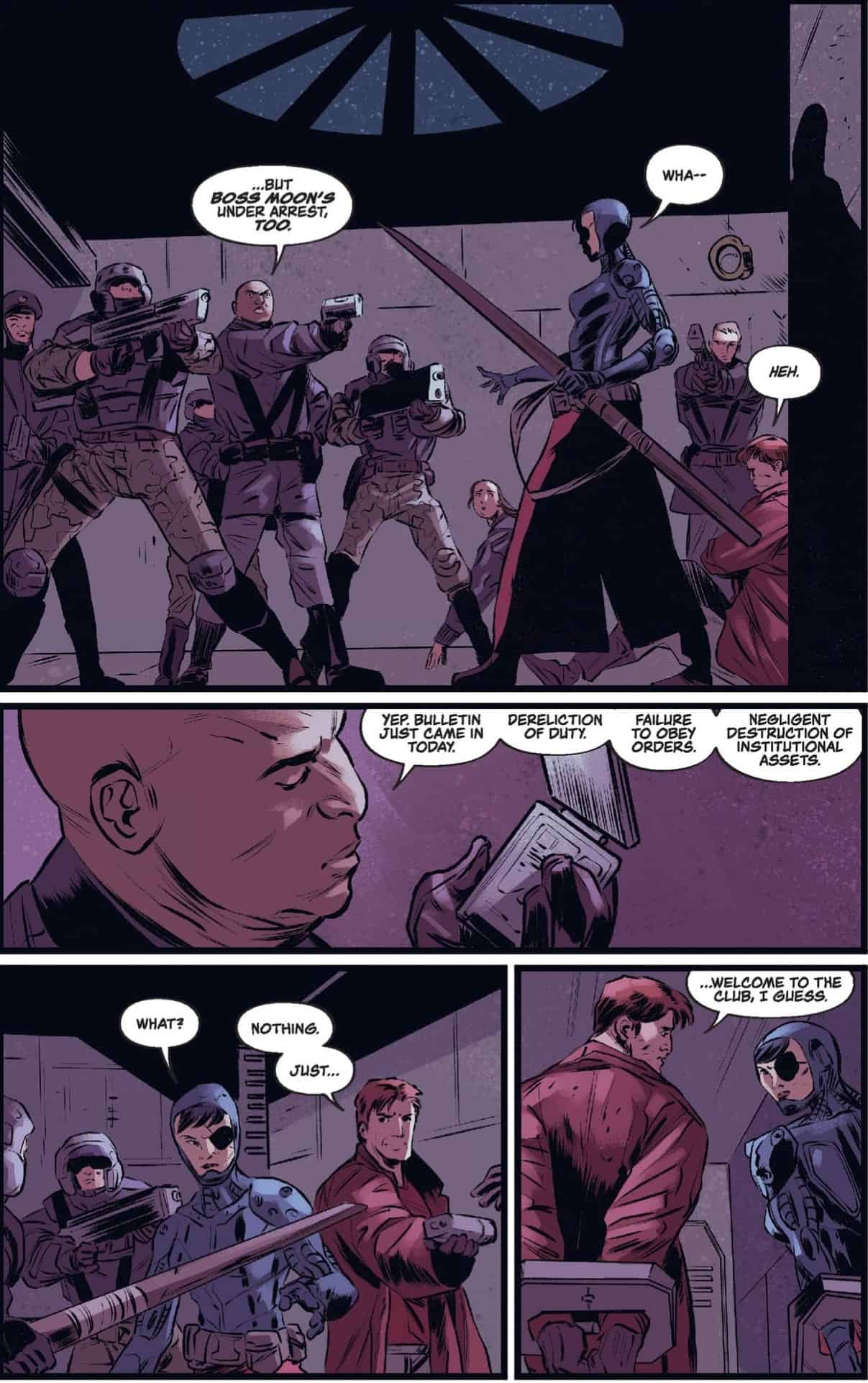 Covers: With so many covers to choose from a Whedonverse fan is truly spoilt for choice. This issue features four stunning covers. The main cover by Lee Garbett (Skyward), along with variant cover by David Nakayama (Black Cat), pre-order variant by Joe Quinones (Dial H For Hero) and unlocked retailer variant cover by Juan Doe (Descendent). With four covers in all I have to say my favourite is the Nakayama. A big fan of his Big Hero 6 variant cover many years ago I have a soft spot for this style and the pose struck by Mal is full on attitude and shows his personality to perfection. This doesn’t detract from either Joe Quinones and his painstaking perspective shot of Simon, or Juan Doe and the perfectly surreal and majestic image of Zoe. But I just felt this was the more evocative of the characters in question. 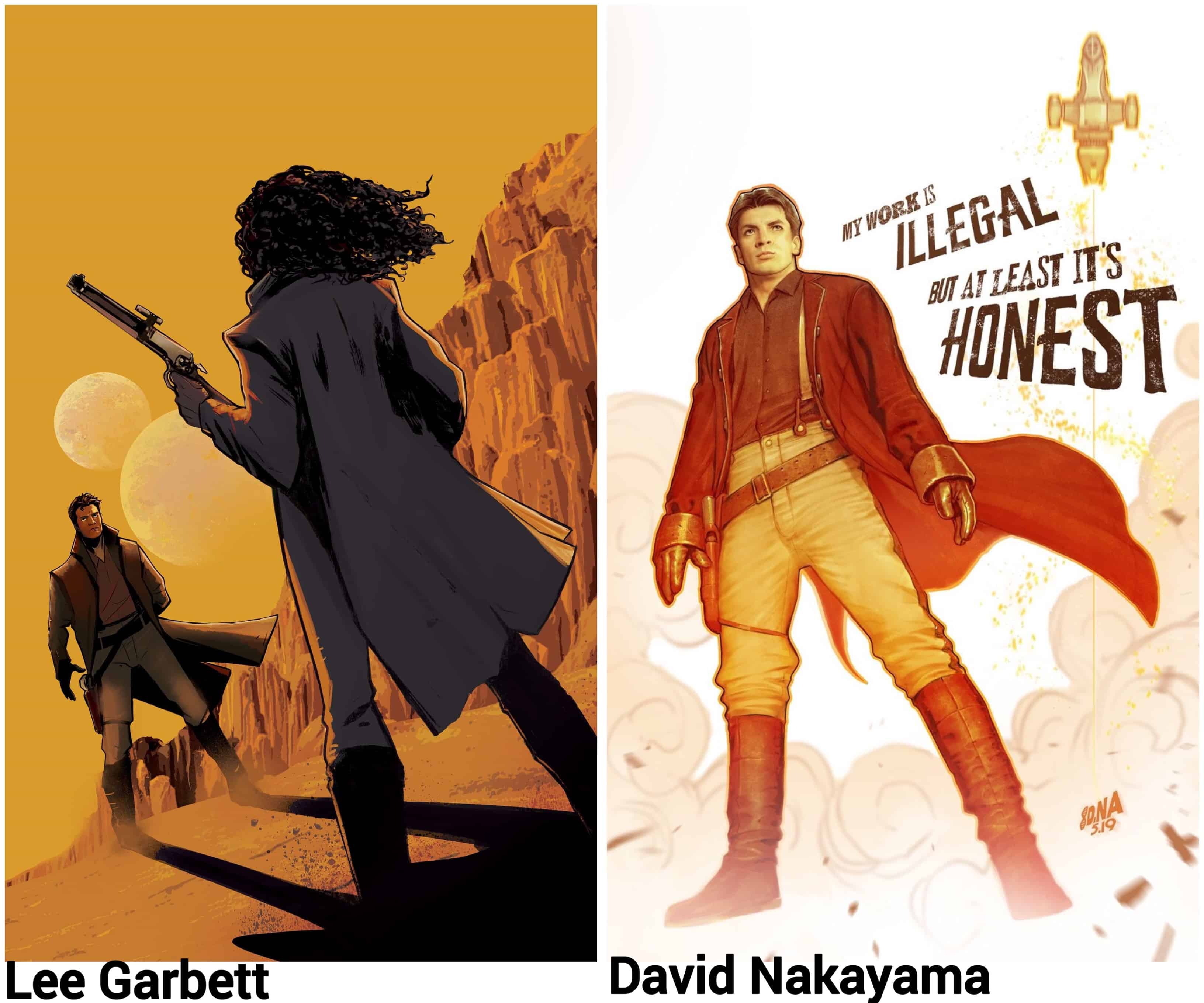 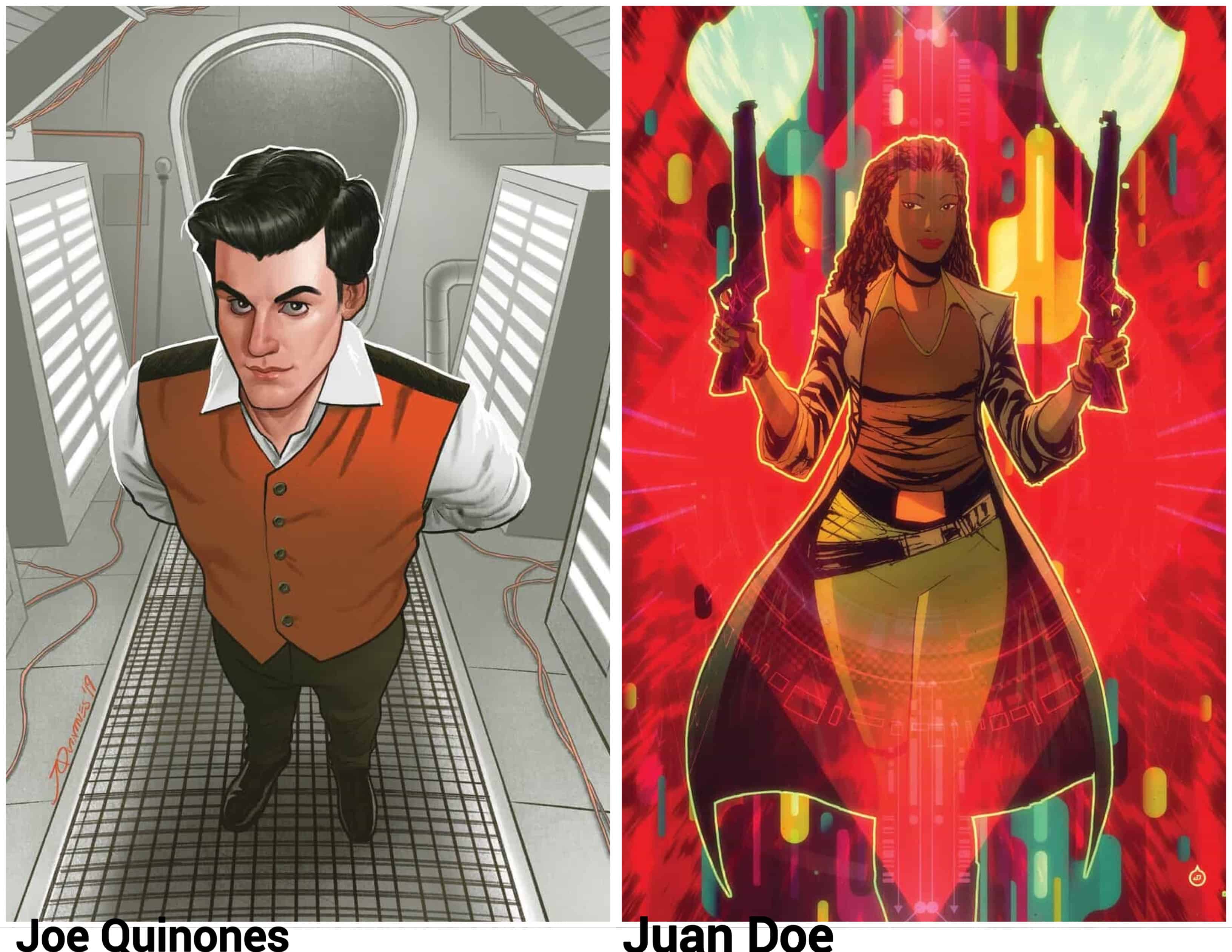 I was sceptical upon hearing this title had changed homes, but there is nothing lost at all in tone or quality. In fact it’s almost like the continuation of the TV series we never got. Shiny!

Firefly #8: Never Judge a Book By His Cover