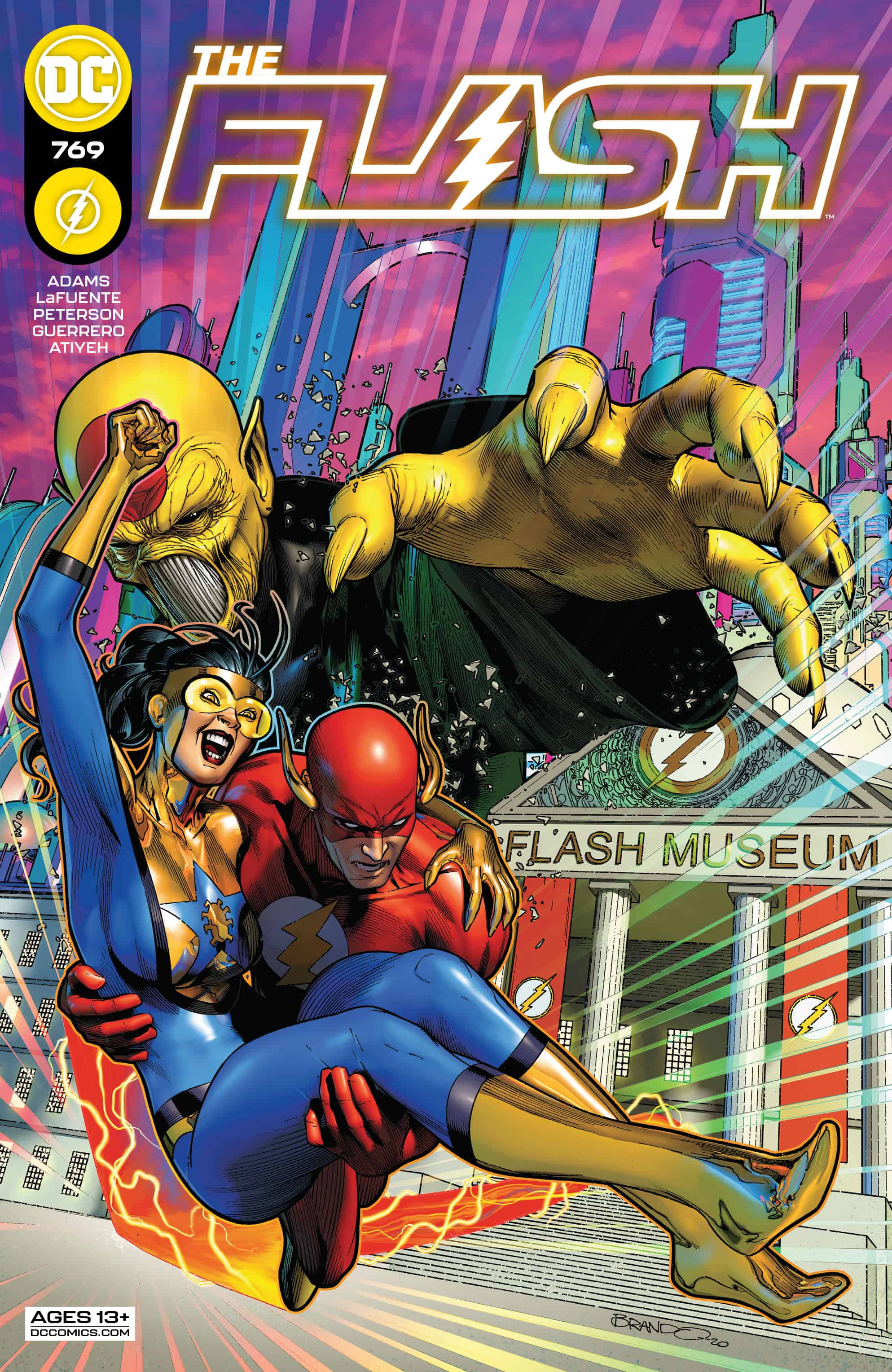 Wally West is still bouncing around the timestream, inhabiting other speedsters' bodies! This time, he's gone back to the future, where he's merged with Bart Allen, the one and only Impulse! That's something he can pretty much handle, right? Sure.

But nobody could have forewarned him about the unpredictable wackiness of... Gold Beetle?!

Flash #769 is a pure joy to read. No big gimmicks, no major hooks, no cheap shock value deaths, no world-shattering “events…” just fun. David LaFuente, sharing art duties with Brandon Peterson, renders the future scenes with Wally-as-Bart with a lighthearted enthusiasm. (He’s come a long way since drawing Spider-Man with a Charlie Brown head, that’s for sure!) There’s a freewheeling breathlessness to LaFuente’s sequences in that he makes everything look so effortless – and by contrast, actually makes Peterson’s work in the present-day scenes look a little over-rendered by comparison. That’s not a knock on Peterson’s art; merely a study in contrasting styles. I’m not sure that pairing these very different artists up for the same book was the best idea for aesthetic continuity, but hey, both of them are clearly at the top of their games, so when in Rome, right?

The plot, continued from last issue, involves Wally West, disembodied by the Speed Force, bouncing around from timeline to timeline for reasons as-yet unknown. Last month, he merged with a hapless caveman; this time around, he’s inhabiting Impulse’s body. There isn’t a whole heckuva lot of plot this month – just fun hijinx in the future, including a kaiju-sized Dominator and the introduction of the Gold Beetle, a product (somehow) of the old blue and gold team itself, Booster Gold and Blue Beetle. Let the bwah-ha-has begin! Gold Beetle is a wonderful new character, impish with just a hint of naivete that never comes across as cloying. Is it possible to fall in love with a character in their very first outing? Maybe. She’s just wonderful.

That sense of fun permeates the entirety of the issue, but it also holds the overarching plot of “Blink of an Eye” back a bit. We’re not very much closer to finding out what’s going on with Wally than we were last month; sure, Barry, Green Arrow, and Mister Terrific are hard at work in the present-day, but no meaningful answers really come of their visit to the Flash Museum. There’s a thin line between fan service and spinning wheels; this month’s installment of The Flash oh-so-carefully walks the line between them for an issue that’s big on smile-worthy adventure even as it barely pushes the needle forward one iota for the plot. That could become a problem if this pattern repeats further on down the line as “Blink of an Eye” continues, but for now, it’s more than good enough to simply have a comic that dares to be fun.

Flash #769 doesn't move the plot of "Blink of an Eye" forward much, but is a ridiculous amount of fun. The entire creative team is firing on all cylinders, making this a standout #DCInfiniteFrontier title!