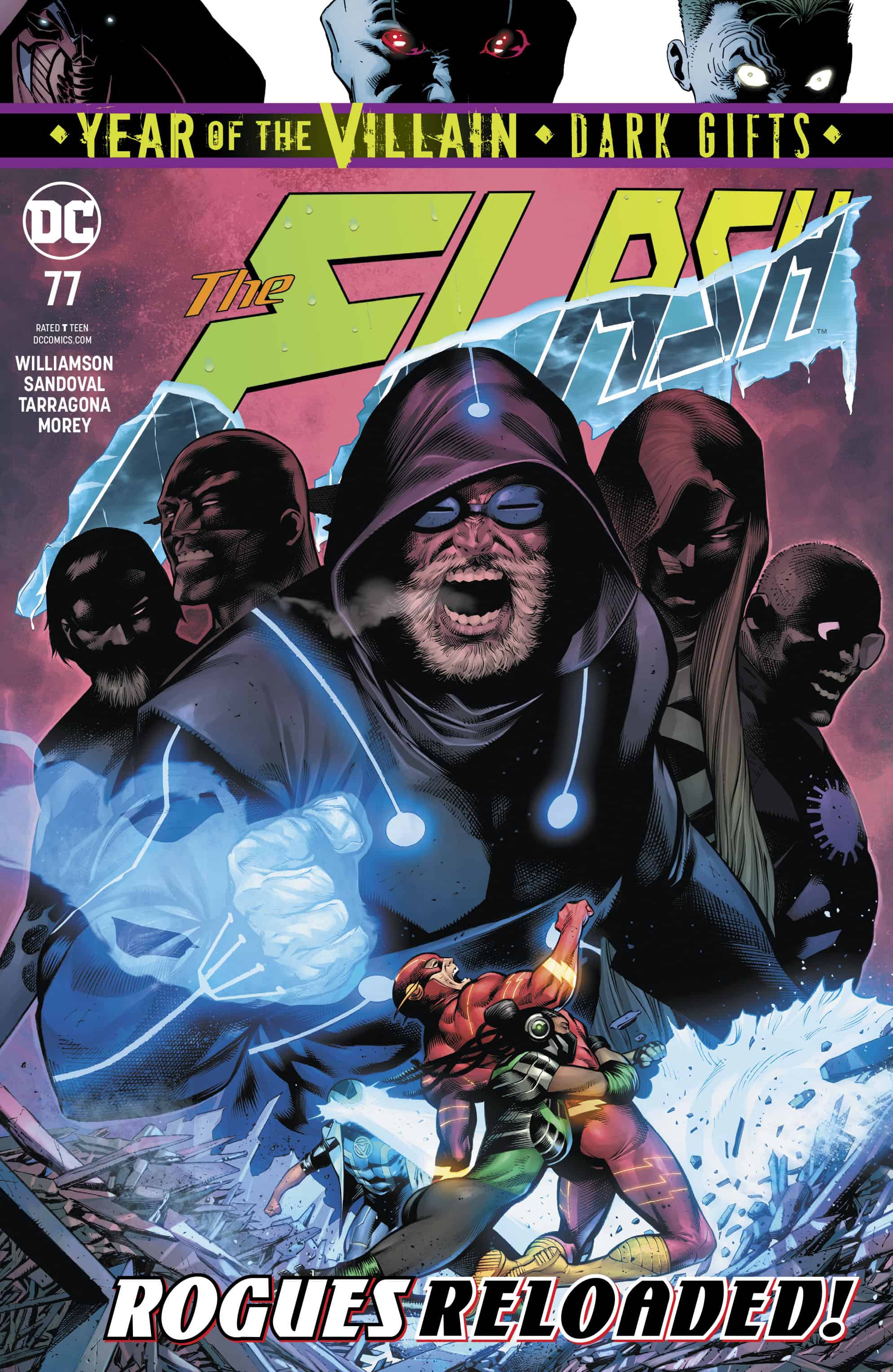 Even as Flash seeks to unite the avatars of the mysterious new Forces - starting with Steadfast, wielder of the Still Force - the Black Flash attacks, determined to destroy the Speed Force's competition! 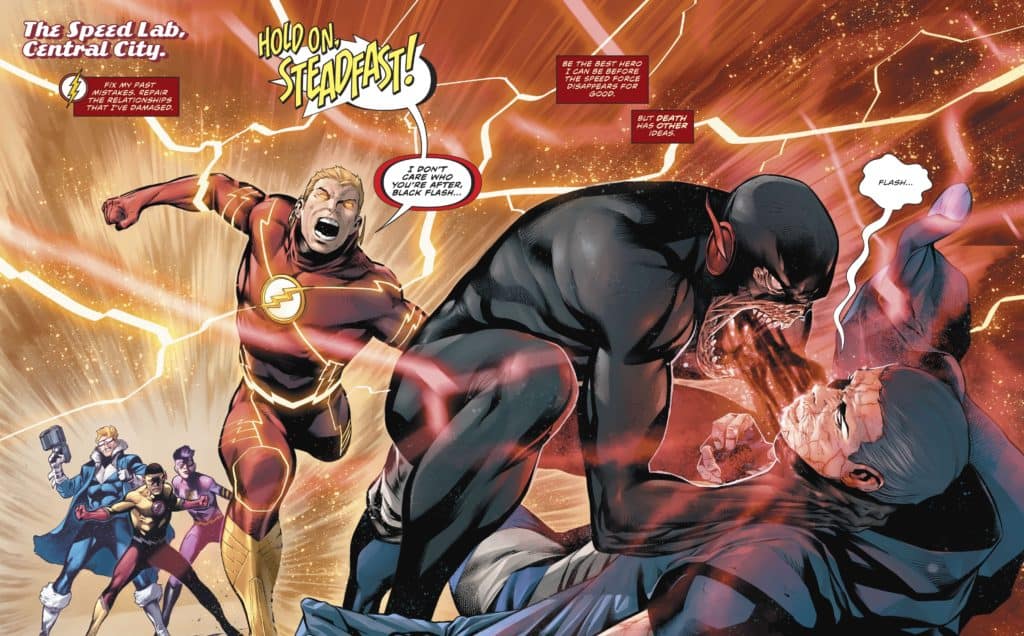 Flash, Kid Flash, and Avery manage to trick the wraith and disappear to safety, giving Steadfast an at least temporary reprieve. 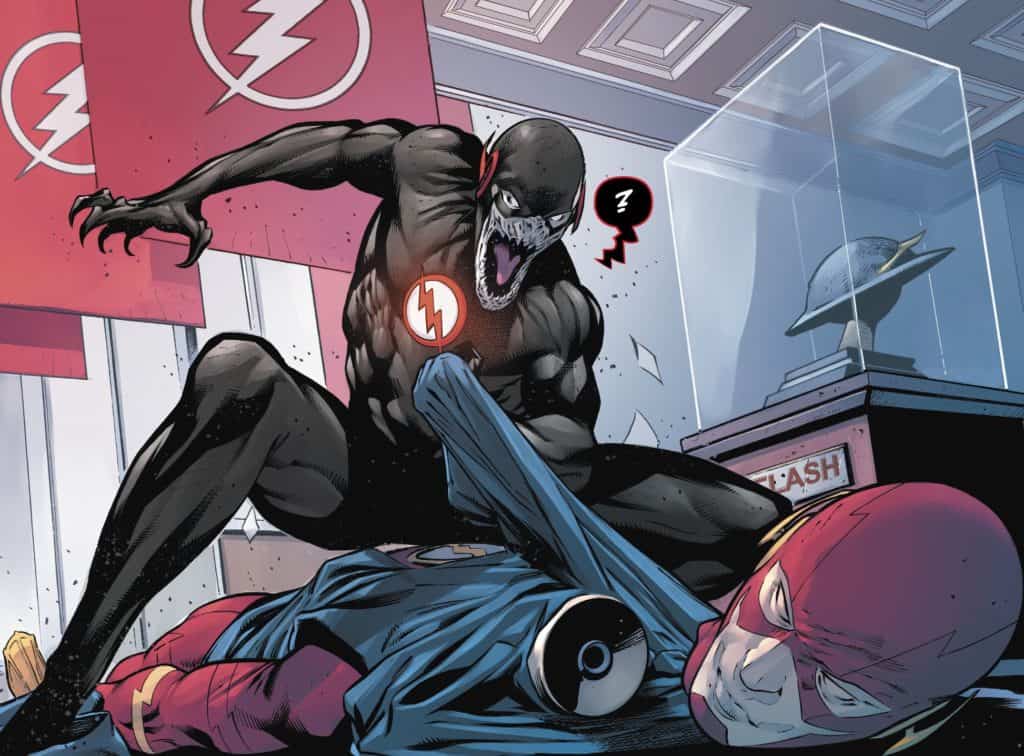 But just because they've eluded the Speed Force personification of Death for now, doesn't mean they don't still have problems, because the Speed Force itself is still steadily waning - causing every speedster to become gradually slower. The Black Flash, acting out of self-preservation, is instinctively attacking the new Forces' avatars. His next target: wielder of the Strong Force, Fuerza! 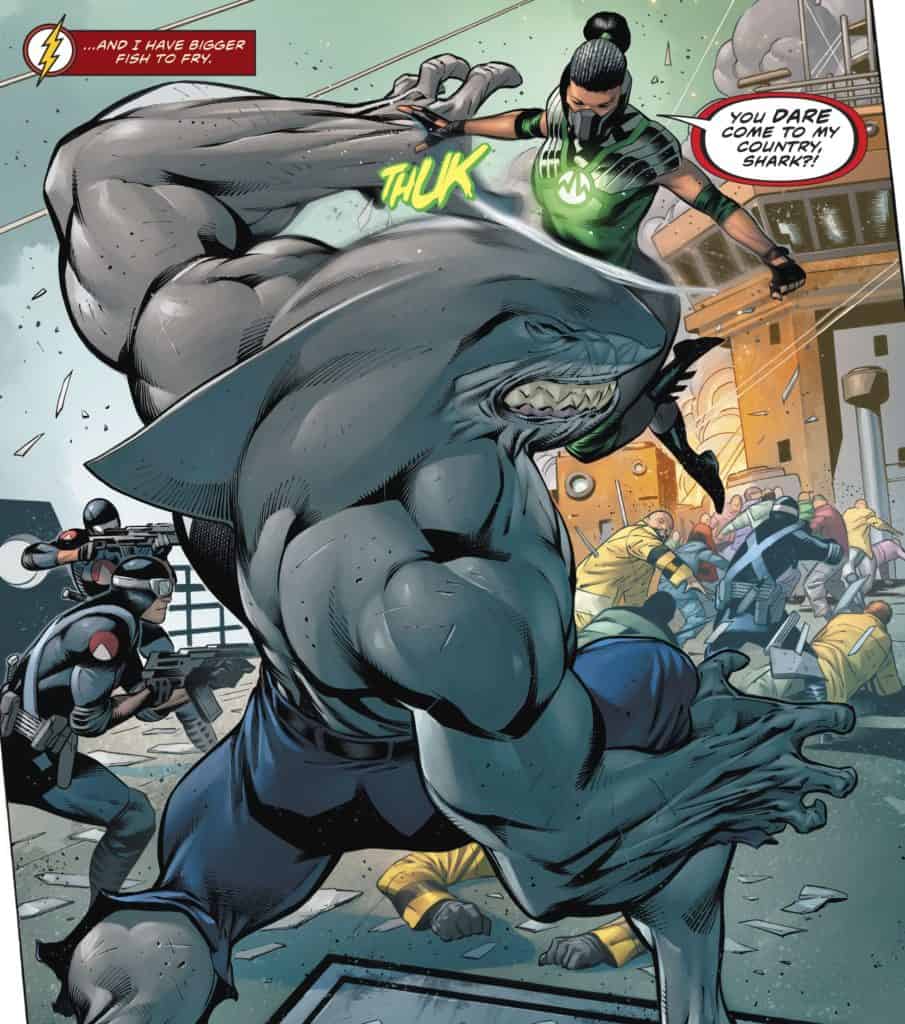 Given that Flash and she parted on bad terms last time they met, though, Fuerza is a little more difficult to convince to join the team... until she meets Steadfast. 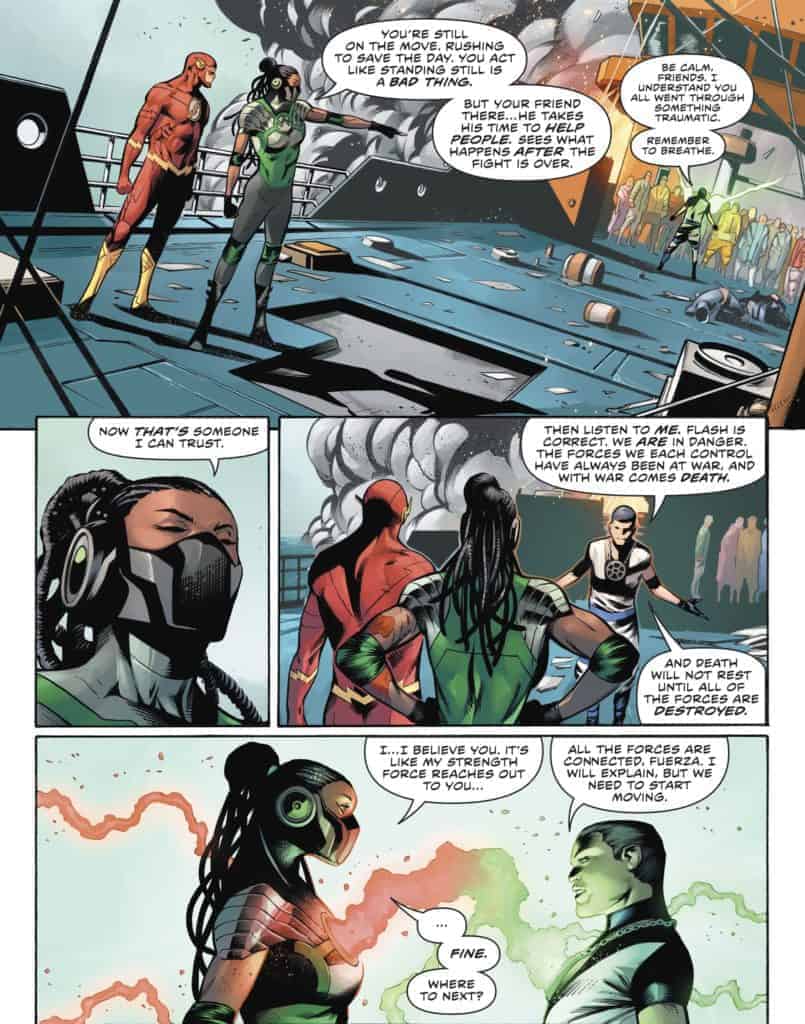 The final Force user, though, is going to prove to be more than a little difficult to work with, given his treacherous nature. Regardless, they must still join forces with the conniving thief known as Psych! 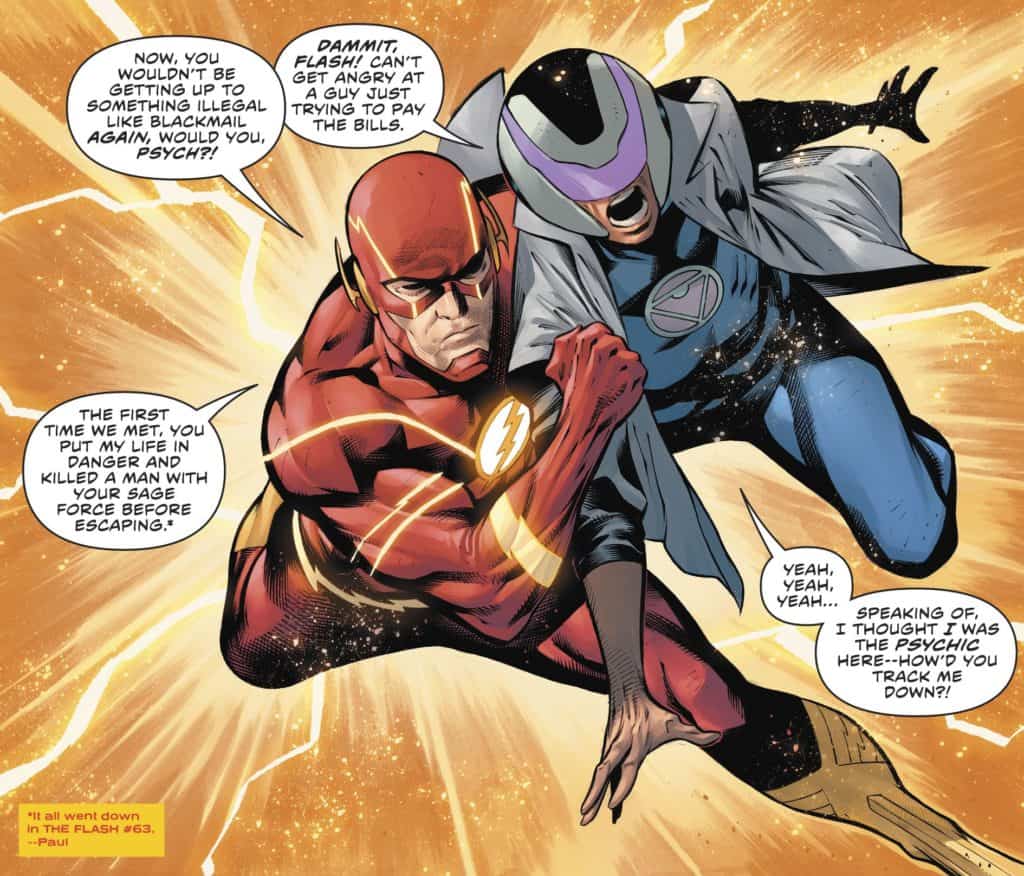 Elsewhere, the new-and-improved Captain Cold and Heatwave find another erstwhile Rogue: the newly amped-up Weather Wizard, and enlist him to their cause! 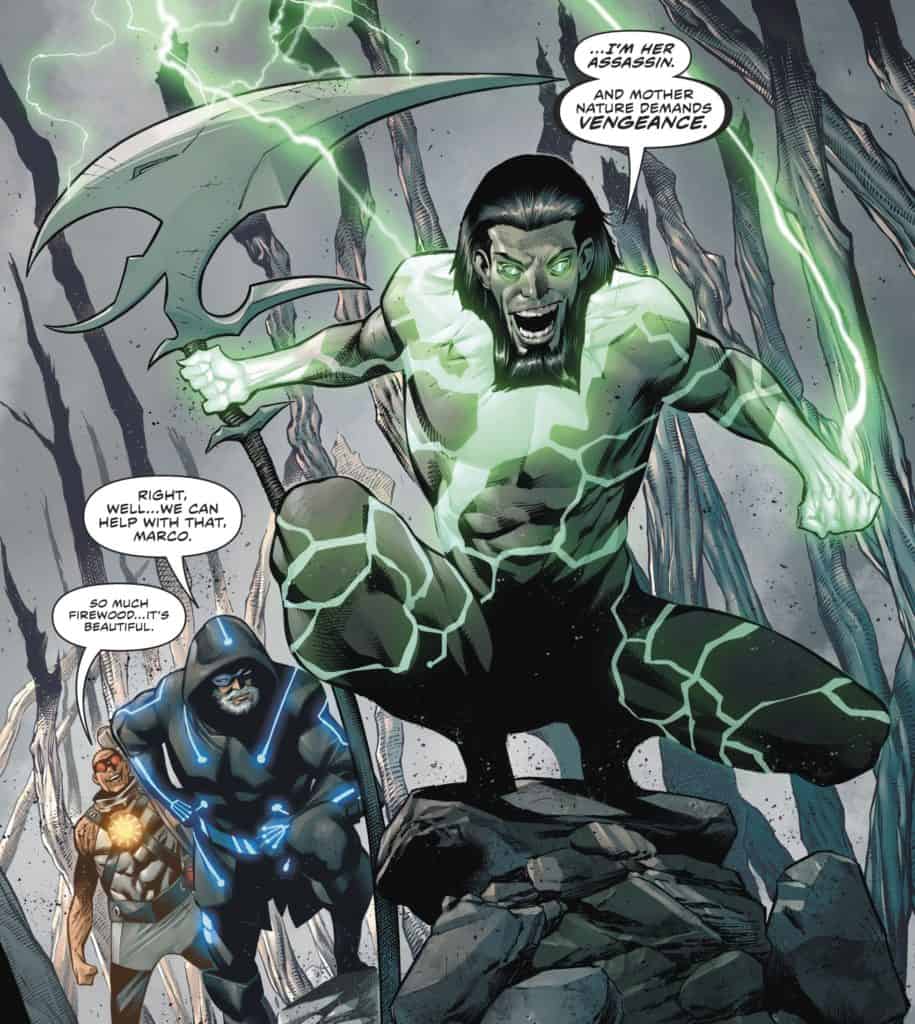 It may not be groundbreaking, and maybe even pretty predictable in places (that “twist” at the end especially stands out, more on that in a minute), but Flash #77  is a fun read nonetheless. Bonus: everything is better any time King Shark shows up.

After months spent taking far too long setting up the new Forces and their individual wielders, writer Josh Williamson seems to be getting back on track. All the pieces are in place and now he can finally stop spinning his wheels and move the story forward. I love that he’s brought the Black Flash into the mix and given it a new mission, one born out of desperation and self-preservation. And if you want to read way too deep into it, siccing an unstoppable avatar of death on all the new Force wielders makes an interesting analogy for old fans bemoaning change in their favorite characters and various status quo. Then again, maybe they’re all just trying to outrace death.

That said, the pieces fall into place a little too easily, and Williamson shows his knack for repetitious story elements again. Fuerza continues to be the personification of stubbornness, but is easily swayed in but a moment by Steadfast’s eternal calm. Psych proves that he can’t be trusted yet again, after Flash trusts him once more even though he should know better by this point. And then he’s betrayed again. Because Psych can’t be trusted! It’s frustrating that even as he finally gets the story moving forward again, the supporting characters remain static, stuck in predictable molds and patterns. It shows a lack of depth Williamson has bestowed upon them beyond surface level, despite the fact that he created these characters.

Rafa Sandoval’s art is a great fit for this book, though. He’s easily in the Howard Porter mold, but a little less cartoony. If I had a single complaint, it’s that he draws Flash a little too bulky, which is an eternal pet peev of mine when it comes to anyone drawing speedsters. Flash should have a runner’s build, lean and ropey, not a thicker, nigh-on bodybuilder physique. Sandoval doesn’t push it that far, but thickness and the Flash do not mix regardless.

As for the rest: the Rogues continue their inexorable “get the band back together” motif, each of them displaying enhanced new abilities thanks to Lex Luthor’s offer to join his forces of doom. This issue it’s Weather Wizard’s turn to show off is new sexy, and the results are… bizarre. Amish beard aside, it feels like all of his personality has been chucked aside in favor of amping his powers up, as though they are a substitute for an actual personality. He seems to think he’s some kind of god now, which is a pretty far cry from the working-class blue-collar presentation of the Rogues that’s been favored since Geoff Johns’ days of yore. Maybe it will work out, but I always get wary when writers (Williamson isn’t the first) decide to push the Rogues too far away from their street-level roots, because it never works out convincingly and they inevitably revert to their default modes anyway. The cover’s nice, though, even though it doesn’t exactly convey what’s actually going on inside the comic very well. Points deducted for recycling the name of Williamson’s first Rogues arc (waaaaaay back in issue fourteen) for the cover blurb: “Rogues Reloaded.” Been there, done that.

Although it's a pleasure to see this story finally moving forward again, writer Josh Williamson's predictable characterization robs the reader of any meaningful surprises that could have been elicited. Over all, not a bad comic, with solid art from Rafa Sandoval - just one that needs a plot that relies less on things the reader has seen before from this writer.