Things go from bad to worse as, in the midst of trying to protect Fuerza and Steadfast from the murderous Black Flash... Steadfast has been kidnapped by ZOOM!

Zoom is scheming to take the Still Force into himself and add it to his own access to the Speed Force. After some quick profiling (i.e. speed-reading), Flash is able to determine where Zoom has taken Steadfast, and heads in for an epic confrontation! 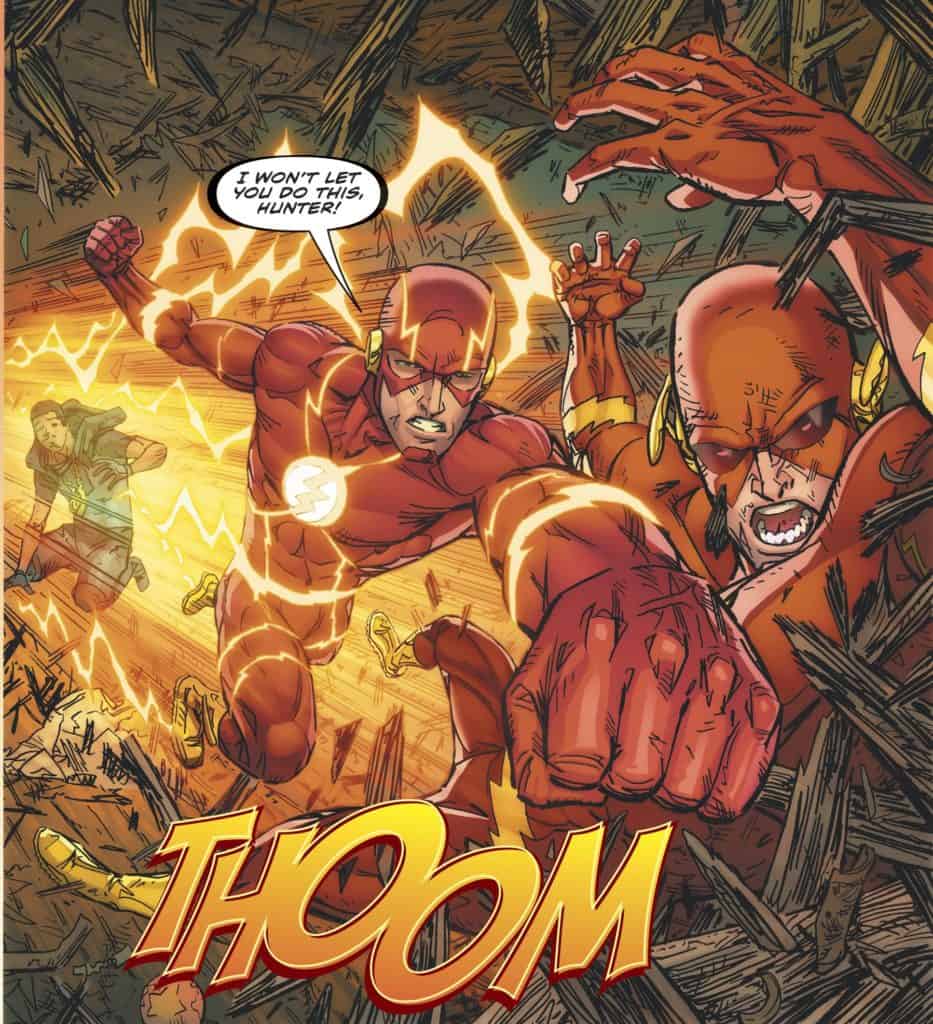 But Hunter Zolomon has far more tricks up his sleeve than anyone realizes...

As “Death and the Speed Force” reaches its penultimate chapter, writer Josh Williamson maybe adds a few too many ingredients to the stew now that Zoom, a.k.a. Hunter Zolomon, is joining the fray. Wasn’t there more than enough subplots to juggle already? We have, ahem – Iris’s return, the revamped Rogues’ Big Score and Kid Flash and Avery’s attempt to stop them, the Black Flash’s attempts to kill Fuerza and Steadfast (in addition to Psych, who isn’t missed), and – tying it all together – the “Death of the Speed Force” itself. Did we absolutely have to throw Zoom into all that mix? Wasn’t the tension of all those other plot points enough? And what the heck is a “Forever Force?!”

Ah, the endgame is revealed – and quite possibly, the endgame of Williamson’s entire run – tying all of the various forces into one user allows access to the Forever Force, and the ability to traverse time unaided! Looking ahead, that very possibly allows the possibility for Reverse Flash to return, since time travel is kind of his jam anyway.

Despite the sudden left turn with Zoom’s involvement, though, this is a very well-crafted issue. Perhaps it’s no accident that Flash artist extraordinaire Scott Kolins rendered the entire issue; although his style isn’t for everyone, it’s certainly unique and has a long and treasured history with the title character. For Flash readers of a particular vintage, Kolins’ artwork is synonymous with the character in the best way possible. Kolins brings a very distinct kineticism to the Flash’s world and characters; his linework is bold and expressive and suits Barry Allen well.

Slowly but surely, Josh Williamson’s Flash run is coming to a head. Where it’s ultimately going is unknown – but since every Crisis as the character front and center, it will be interesting to see how the changes to his world play out in the wider context of the DCU. We’ve already seen the Sage and Still Forces at play in Justice League, and that can’t be by accident. Something major is brewing behind the scenes at DC, and you can be sure the Flash will be front and center.

Where he deserves to be.

Though perhaps zigging where it should have zagged by adding Zoom to the already-packed "Death and the Speed Force," Flash #80 nonetheless remains an engaging read. For those who have been pining for a return to greatness for the title character, this has been an arc well worth getting in on!

Avengers Forever #9: Always, I wanna be with you, and make believe with you
September 23, 2022
Recent News & Reviews