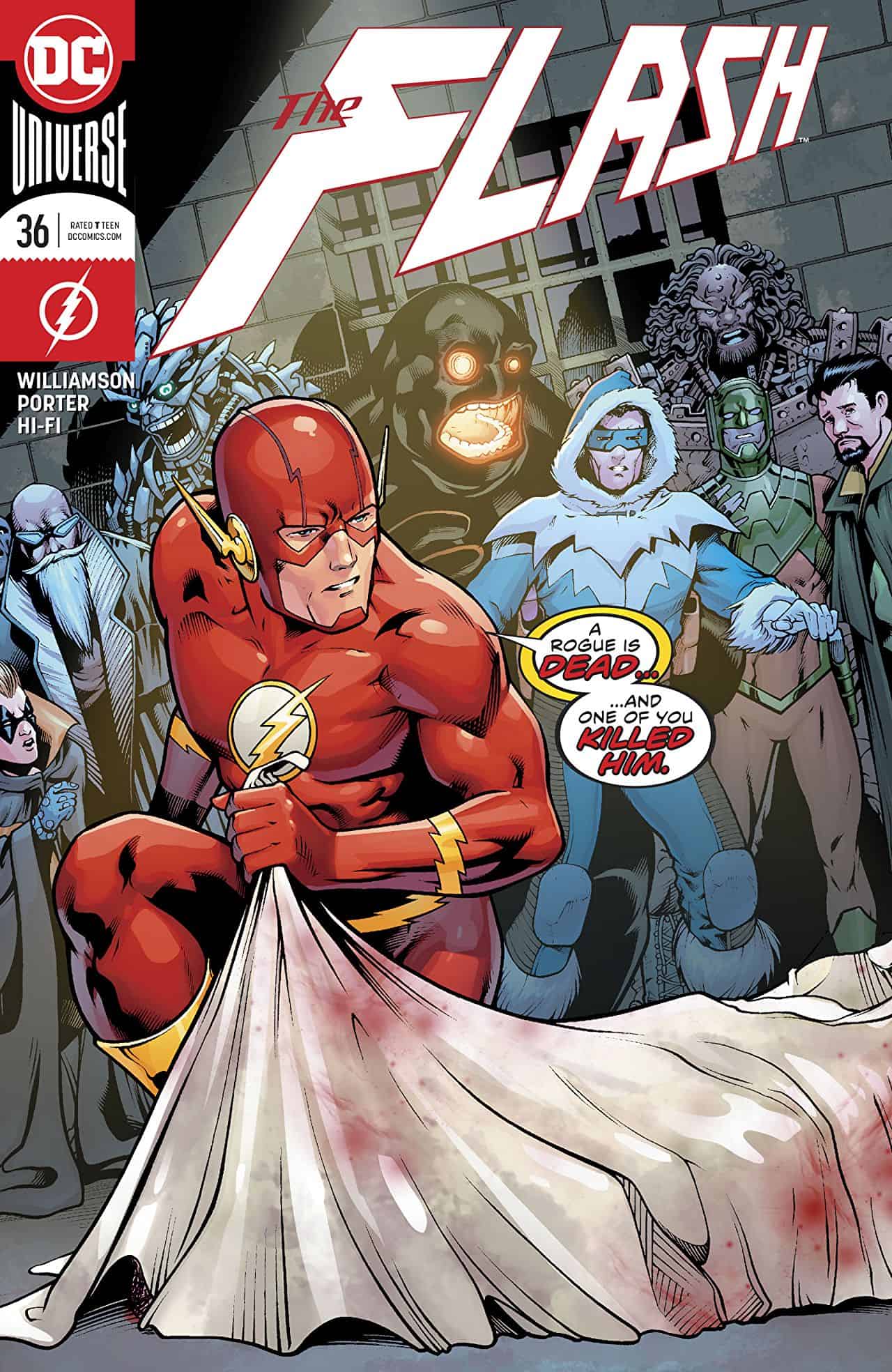 When a member of Flash’s Rogues Gallery is murdered at Iron Heights, Barry Allen is determined to solve the mystery! Who did it and why will lead the Fastest Man Alive to a shocking secret that has been hidden in plain sight the whole time!

Following his battle with the new Negative Flash, a call from Warden Wolfe to Barry Allen comes in over The Flash’s headset asking Barry to get back to Iron Heights.  Someone has been murdered.

Barry is thinking to himself about 4 different mysteries in the DCU he’s solved as The Flash.  He recounts how his boss at the CCPD, David Singh, transferred him and Kristen Kramer to Iron Heights due to their many recent mistakes and some insubordinate behavior.  As Flash changes back to his civilian clothes and arrives at Iron Heights, he’s shocked to find an old super-villain, Turbine, is the murder victim.  Kristen is alive and well and collecting evidence.

Singh shows up, orders them to stop and preserve the crime scene only.  Their old friends from the CCPD, Detectives Murrow, and Burns are going to handle the investigation.  Warden Wolfe shows up and orders Singh, Murrow and Burns to leave.  Before that can happen, The Trickster flies into the room screaming he killed Turbine and now he’s going to bust out of prison!

To protect his secret identity, Barry punches out Trickster as he tries to fly past them and then he pretends that punching him hurt his hand.  Wolfe shouts at Trickster that he couldn’t get out of his cell so he can’t have killed Turbine.  Trickster makes a wisecrack and then Wolfe orders the guards to take him to solitary confinement.

Kristen and Barry don’t buy Trickster’s all-too-convenient confession.  Barry walks away believing the only inmate who will talk to him at all is August Heart AKA Godspeed.  August claims the electronic collar around his neck prevents him from using his powers or leaving his cell so he couldn’t have done it.  He is perplexed, though, that Barry looks different; he’s got darkness in his eyes.

Barry is incensed and retorts that August knows nothing about him or about Turbine’s death.  But August replies that his death is just the tip of the iceberg: “The detective in me is seeing all kinds of red flags around here.”  A guard sees Barry talking to August and warns Barry that interrogating the inmates is against the Warden’s rules as he and Kristen are only to preserve crime scenes, not investigate them.

Barry stomps off determined to blow off steam as The Flash and catch some villains.  He’s in luck as Bug-Eyed Bandit (working for Central City’s new crime boss) and the Trigger Twins (working for Copperhead) are feuding about who gets to rob a bank.  The next 2 pages allow Howard Porter to cut loose in style… 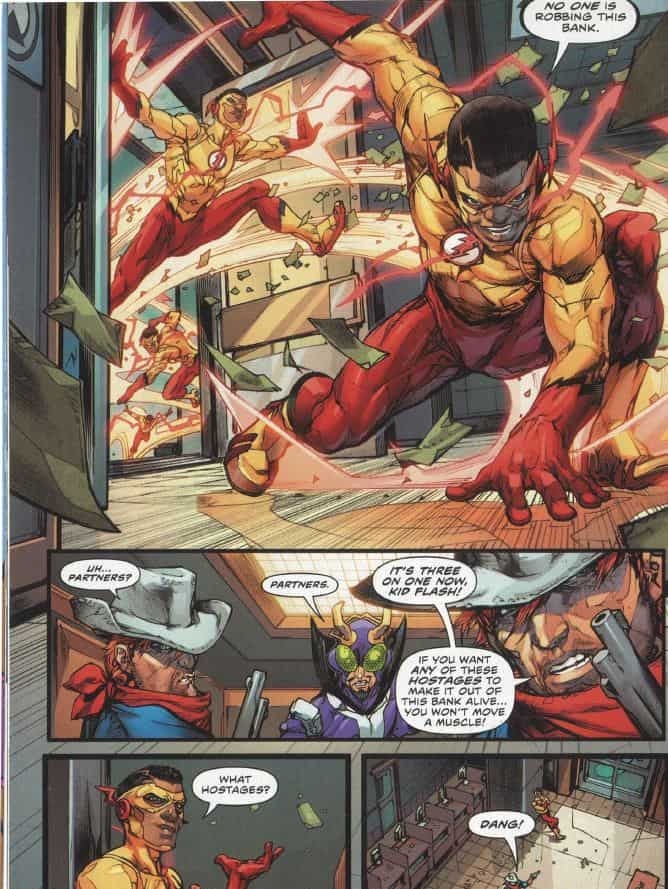 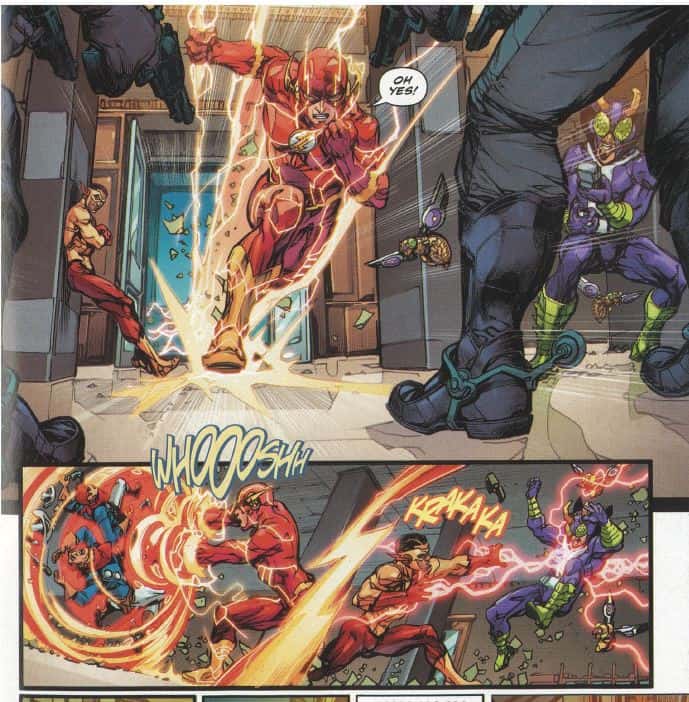 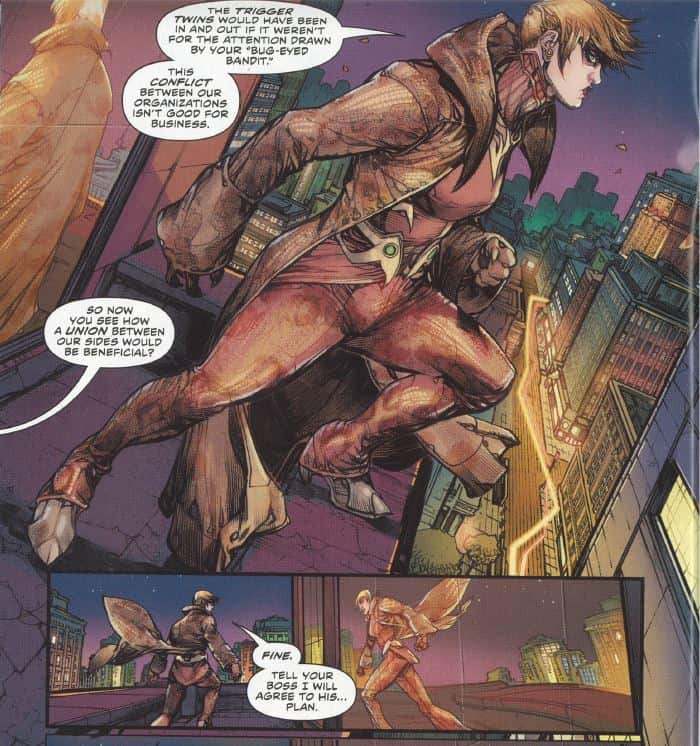 The next panel shows Mirror Master before he leaves to tell his boss Copperhead agrees to team up.

Back at Iron Heights, Warden Wolfe watches the monitors on all of Flash’s Rogues in their cells—unaware they’re all holograms.  Captain Cold and the Rogues are in fact underground holed up in the basement beneath Iron Heights reviewing all their loot from heists committed by other crooks in Central City.  Mirror Master tells Cold that Copperhead agrees to have her mob work with Cold’s.  Cold smiles and says I-told-you-so, then announces to the team they’ll take care of Copperhead after they take over Central City.

August Heart is there and wants Cold to help him remove his electronic collar. Cold’s sister, Golden Glider, grunts that he’s not a Rogue.  Cold agrees and asks what he has to offer them.  August grins and replies, “I can give you The Flash.”

This is one of the best issues in Joshua Williamson’s run.  And that’s because it’s nothing more than a damn good yarn.

Williamson doesn’t resort to non-linear storytelling ala Priest’s Deathstroke or trying to rip off the storytelling gimmicks of Grant Morrison or Alan Moore.  All he’s trying to do is tell a simple story about a hero versus villains with a reasonable number of subplots and foreshadowing.

In this day and age where both DC and Marvel try to out-hype each other by constantly promising ever bigger twists, turns and “shocking” reinvention, it is so refreshing to find a writer who only wants to tell a fun story.  Williamson engages in his fair share of red herrings—implying last issue that Kristen was the one who was murdered by the Rogues or that August has no idea how or who killed Turbine—yet these are just clever diversions.  He’s not trying to reinvent the medium or to shock readers by doing something controversial to the characters to generate attention from reporters.  That’s what the real surprise is here: a good story.  Nothing more.

There are many nice touches in his script.  He and his editors Rebecca Taylor and Andrew Marino shrewdly include enough captioned footnotes to prior issues (and not trade paperbacks, thank you) to acknowledge recent history without inundating readers with so many that it looks like someone is stuffing miniature index cards on every 3 or 4 pages.  Williamson having August note that Barry has darkness in his eyes is a subtle nod to earlier issues where Reverse-Flash infected Barry with his Negative Speed Force.

There are no massive info-dumps, no pages filled with endless exposition.  There is an economy to Williamson’s script in this issue.  We are told enough backstory to exploit the sequential history of a superhero without being buried in footnotes or monologue-ing from villains or heroes.  The dialogue doesn’t try too hard to be witty or snarky which nowadays is a huge relief.  Humor and jokes are quick and breezy and arise organically from characters’ actions instead of overly forced comedic contrivances.

Best of all, every character is behaving in a logical manner with their actions being consistent with their prior appearances in previous arcs while still managing to leave one not exactly sure what’s going to happen next.

The addition of Howard Porter to the rotating art team is a godsend.  Porter spent a good chunk of time working on DC’s Hanna Barbera books, but now he’s back drawing DCU superheroes where he belongs.  The amount of detail he goes into now is greater than his late 90s heyday on JLA and that is for the better.  Porter proves he’s an experienced pro who knows how to shift his focus between foregrounds and backgrounds as needed.  His knowledge of how to maximize close-ups or wide shots when the plot calls for it is intuitive and engrossing.

Final Thought:  Josh Williamson’s run on Flash is equal or superior to William Messner-Loeb’s early 90s run.  But more than that, there are moments where it reminds me of David Michelinie’s late 70s/early 80s run of Iron Man.  Plots, characterization, and humor all evolve naturally and no events feel forced.  Couple this smart, economical and clear-eyed writing with a sturdy bullpen of talented artists and you have an always good to at times great series. Flash #36 is good, old-fashioned superhero comics of the kind we sure could use more of now.