Captain Cold has a plan to kill his biggest competitor—and if The Flash doesn’t hurry, Wally West may die, too!  But Flash has lost his powers, locked in Iron Heights fighting Cold to the death!  Can the Fastest Man Alive trust a murderer who’s already betrayed him or is it already too late to save Kid Flash’s life? 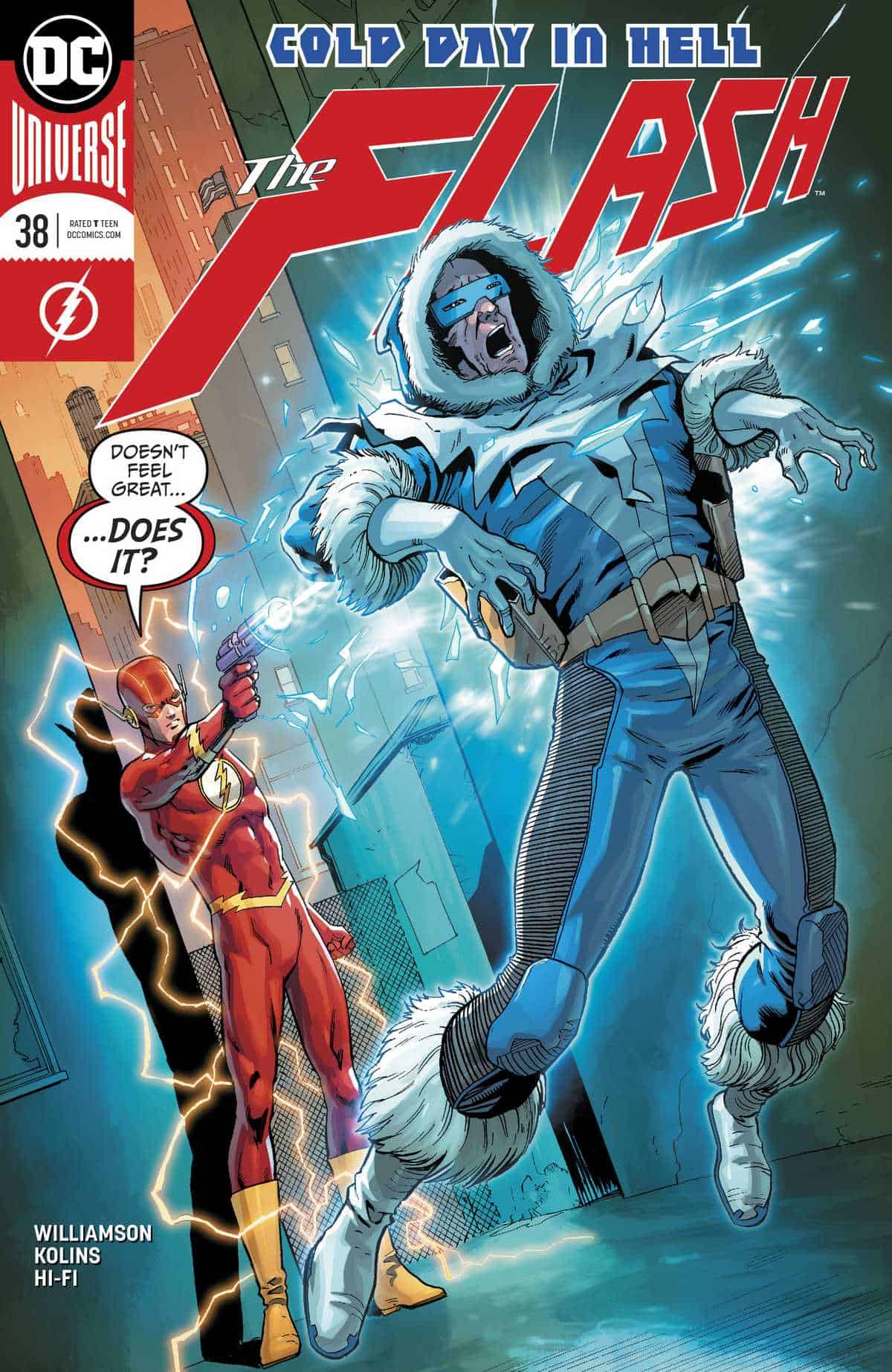 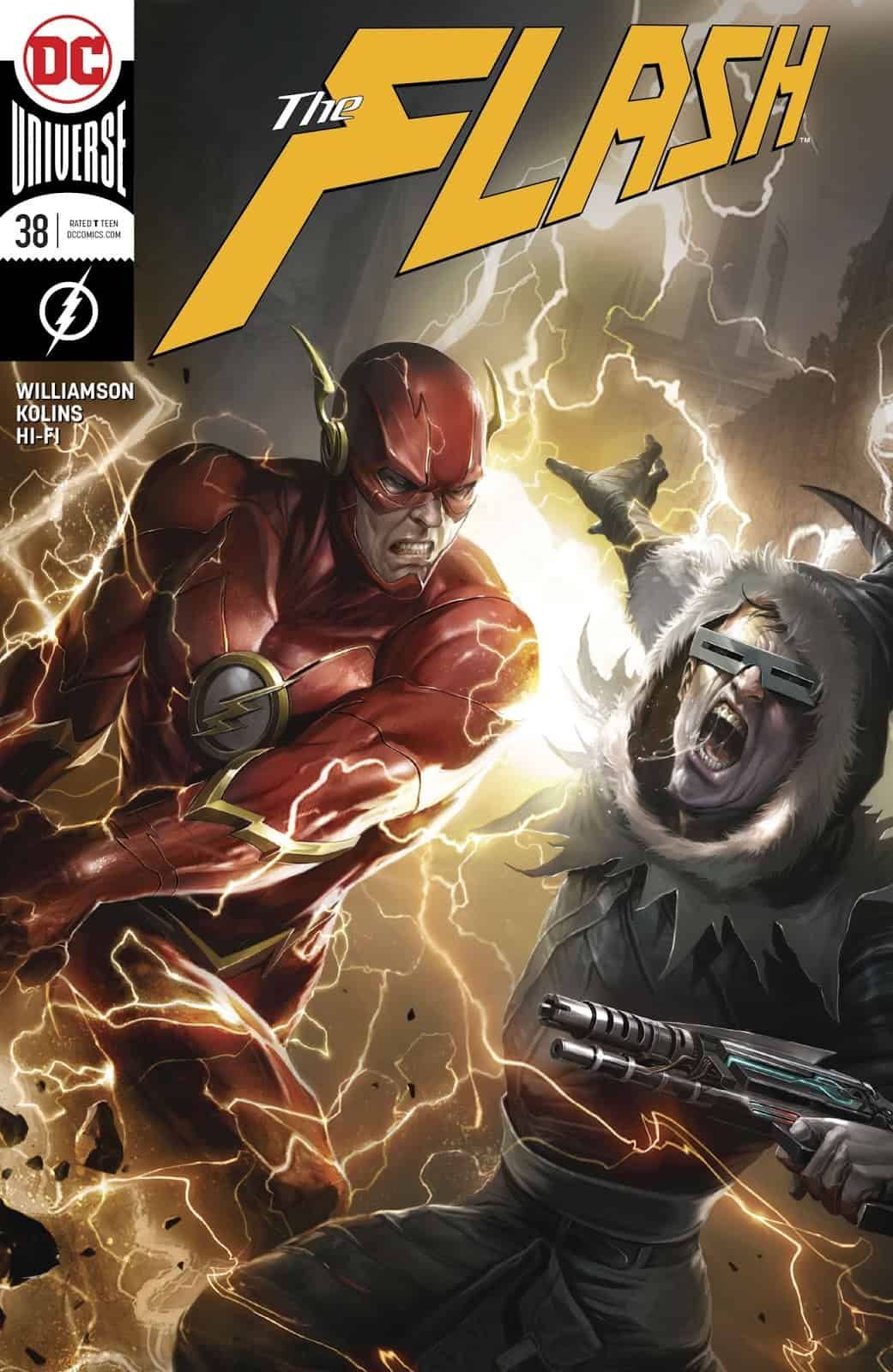 What You Need to Know:
August Heart AKA Godspeed has led The Flash into a sub-zero trap at Iron Heights that shuts down his super-speed.  Now Leonard Snart AKA Captain Cold wants to fight Flash man-to-man and beat him to a pulp while Godspeed and the Rogues watch.

What You’ll Find Out:
Barry Allen is thinking about all the mistakes he’s made in the last few months as he gets ready to fight Captain Cold.  Behind the window of their cell, Godspeed and the Rogues watch as Cold pummels Flash who’s lost his super-speed due to the absolute zero temperature coming from the walls and floor around him.  Flash falls to his knees.  Cold gloats that the delivery of freeze ray guns that Flash found leading him to the Rogues’ secret hideout under Iron Heights will soon explode and kill his criminal competitor, Copperhead—and everyone near her.

That’s when Godspeed knocks out Heat Wave and Weather Wizard so he can shut down the cold that’s stolen Flash’s speed.  Flash knocks out the rest of the Rogues and confronts Godspeed… 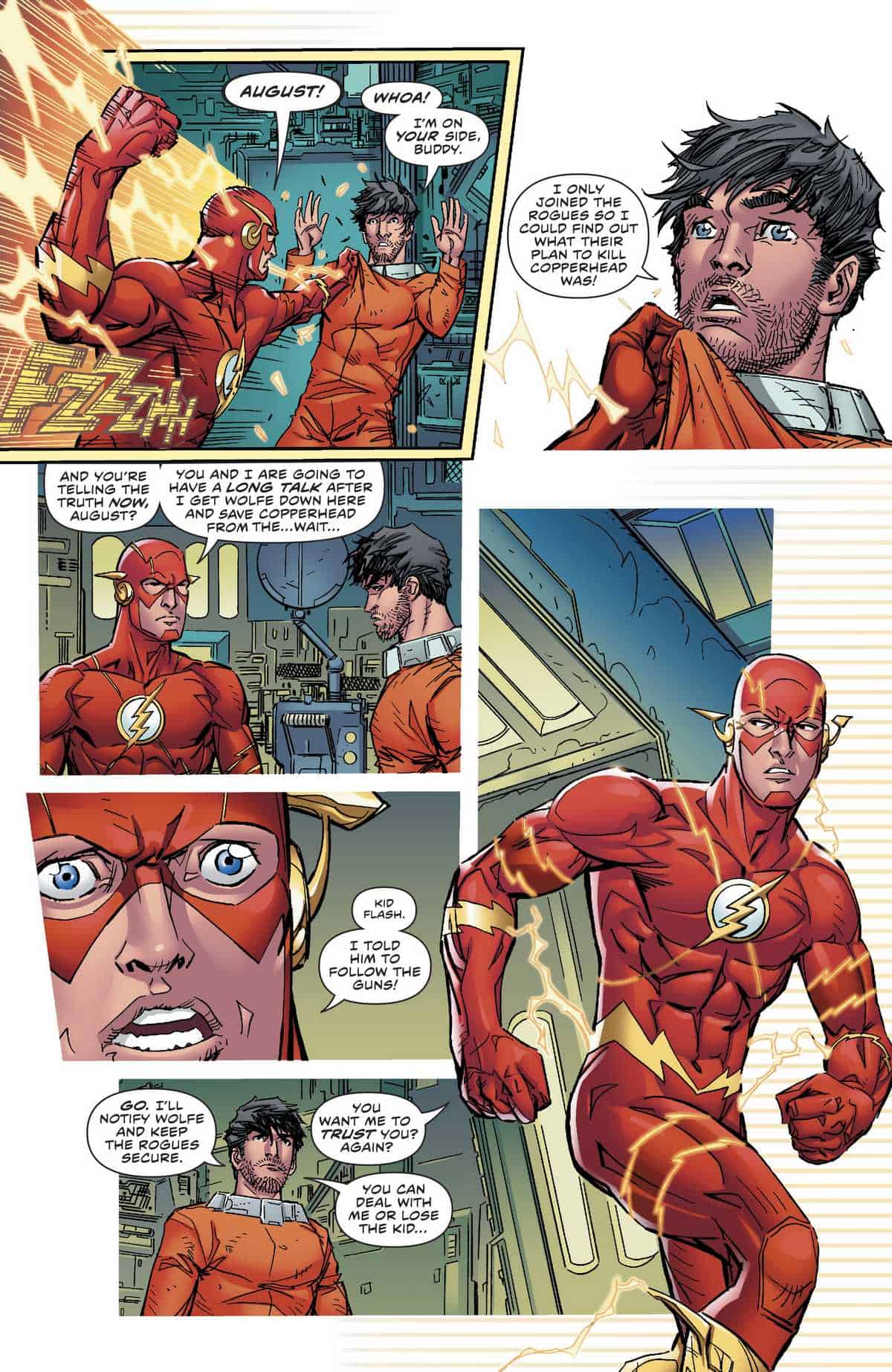 Flash runs off and radios Kid Flash who tells him he found the warehouse where Copperhead is examining the shipment of guns she just got from Captain Cold.  The guns start to blow up and Kid Flash stands in front of her to save her life as ice fills the room.  But Flash arrives and saves them both before they freeze to death.

The Central City Police show up and let Copperhead go.  She claims to have no idea why those guns were sent to her and she couldn’t be in league with Cold because he tried to kill her.  Plus, she has a terrific lawyer.  As she gets into a limo to be driven away, she tells a shadowy figure, “It’s done.  They have no idea you run the show in Central City.”

Back at Iron Heights, Warden Wolfe and Kristen Kramer are supervising the apprehension of the Rogues.  Wolfe complains his only witness to what the Rogues did is a convicted murderer, August Heart.  But August throws it back on him saying it’s Wolfe’s fault for letting the Rogues walk around in their costumes which is where they stashed what they used to set-up and wire their hideout underneath Iron Heights.  Cold threatens August that the Rogues will put him on their hit list if he keeps talking… 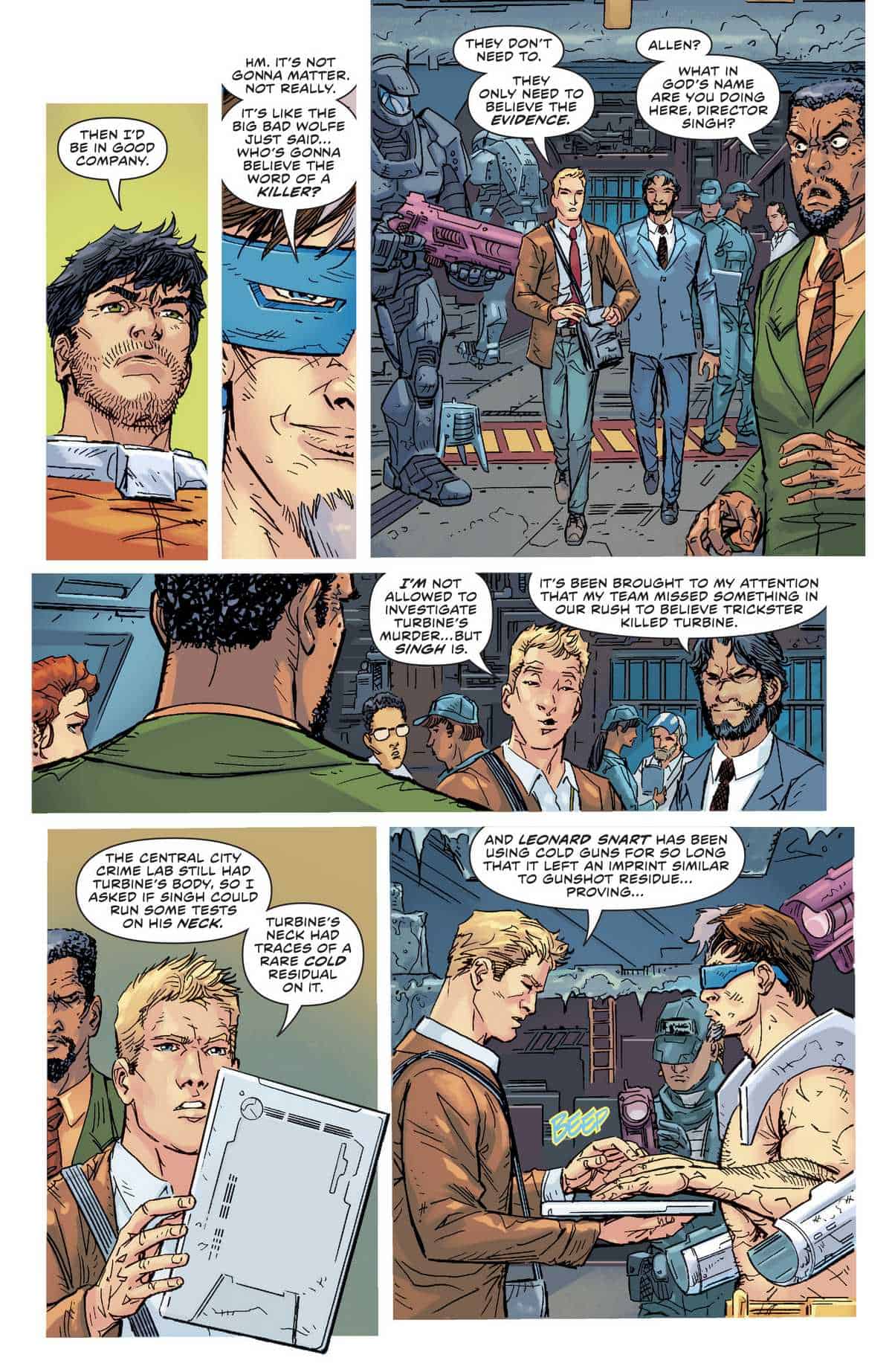 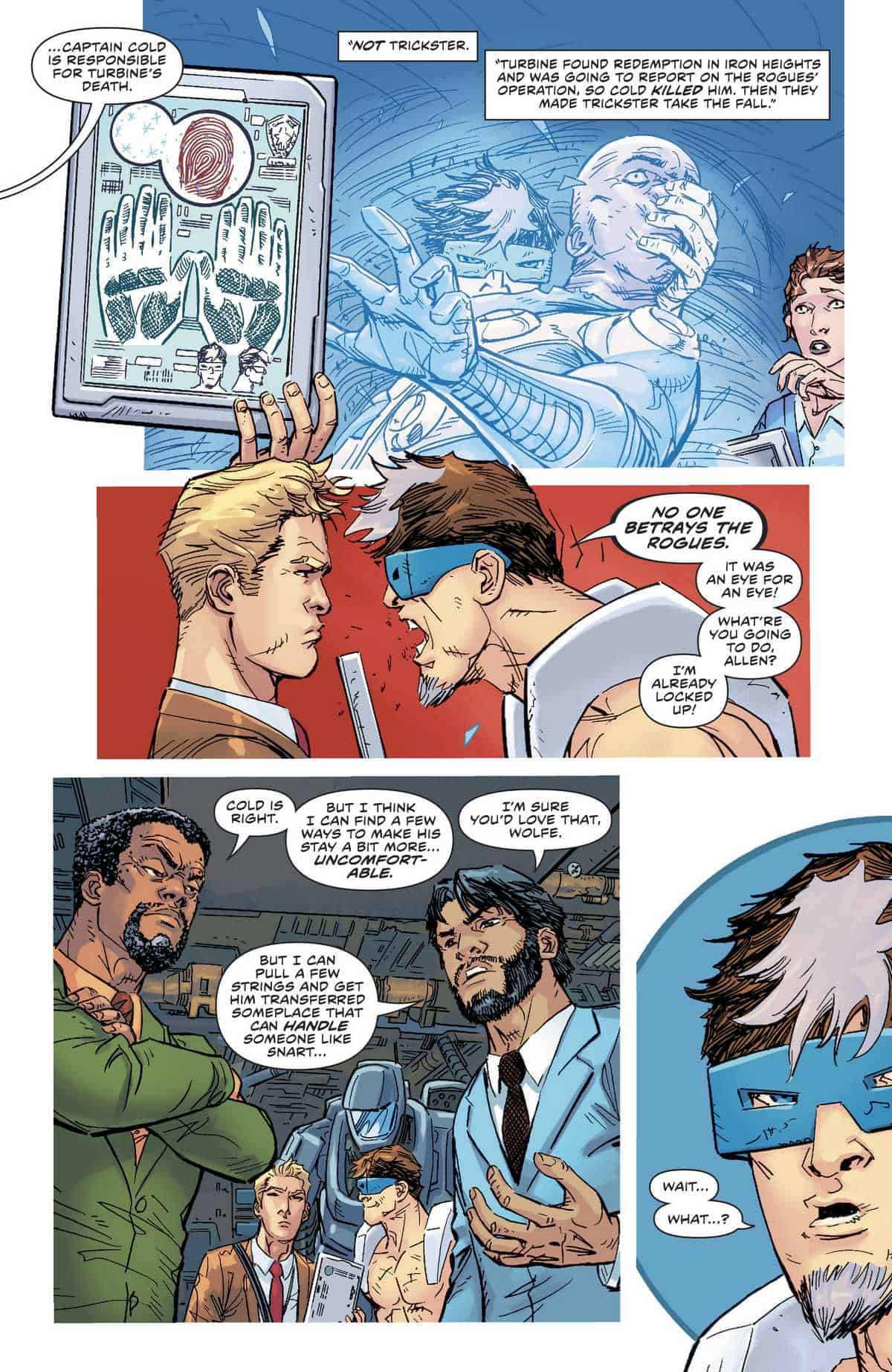 Singh informs Wolfe he has to report him for screwing up and letting the Rogues take over Iron Heights.  But Kristen Kramer tells him to hold off because nowhere else can handle the Rogues and Wolfe are the only one qualified to run the place.  Singh backs off but tells Kristen he’s disappointed in her willingness to defend Wolfe.  As Singh and Barry walk away, Wolfe smiles, thanks Kristen for sticking up for him and ask for her help with a case he wants kept quiet.

Barry pays another visit to August’s cell.  He reminds Heart he could have escaped Iron Heights while he was off saving Kid Flash and Copperhead.  He says he decided not to… 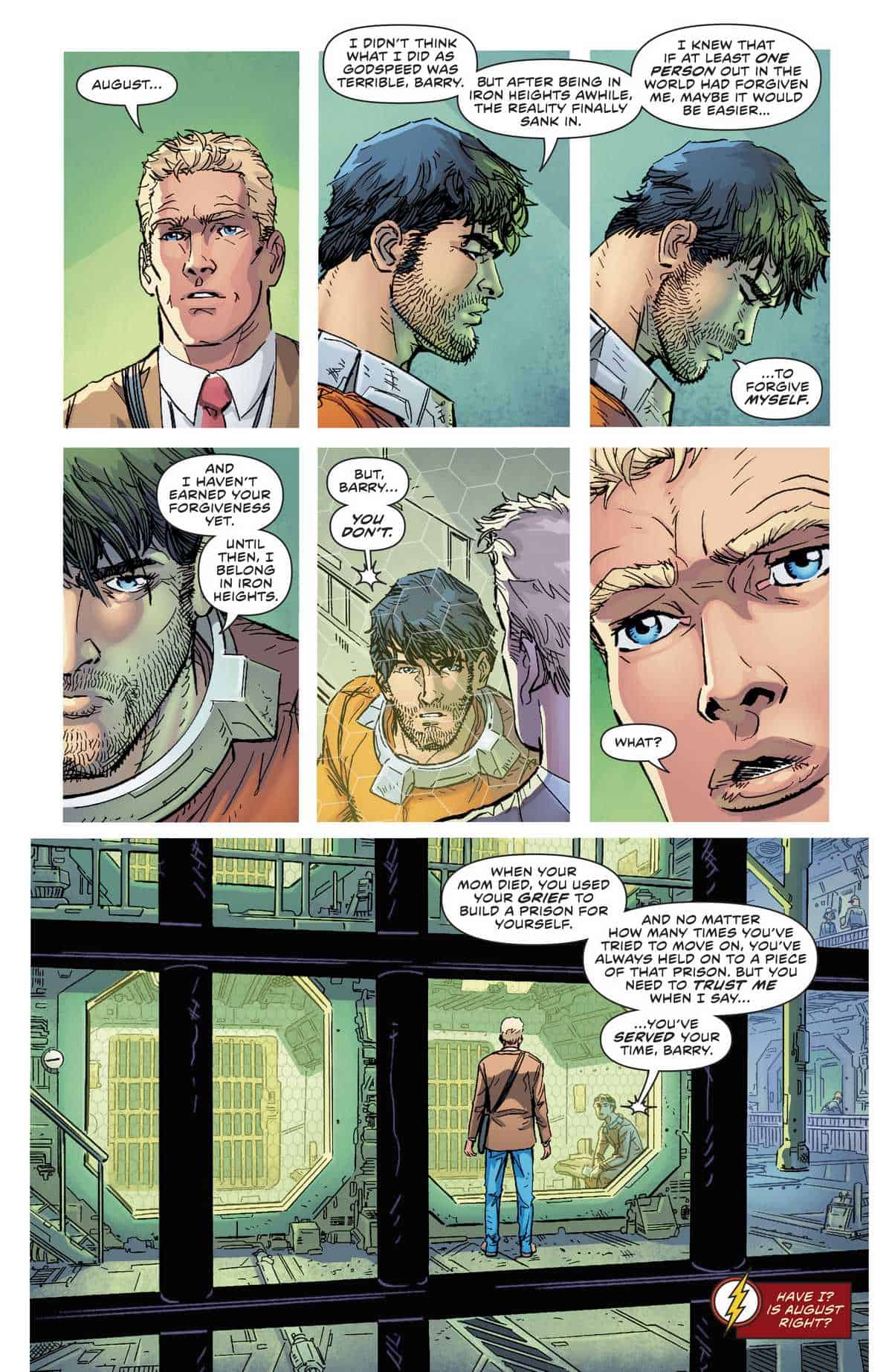 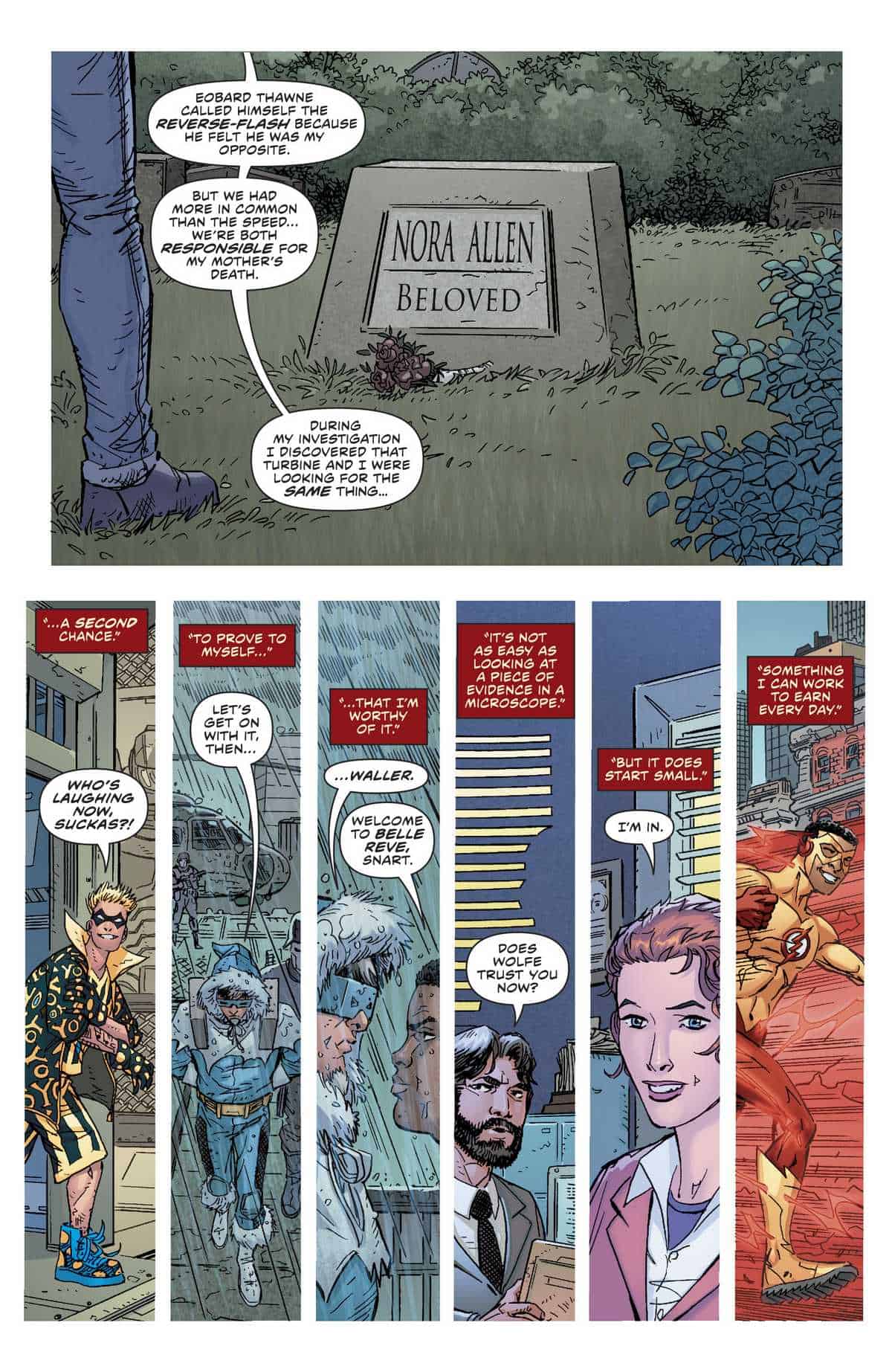 As Barry stands at his mother’s grave pondering his mistakes and how to find forgiveness, he appears to be talking to himself.  But the last page reveals he’s talking to Iris as he tells her she is the only one he wants to help him find forgiveness.

Joshua Williamson is on fire and events in this book are rapidly heating up.

Kudos to Williamson for maintaining the suspense and keeping me guessing.  I confess I was sure I had it all figured out.  August really did betray Barry and was going to join the Rogues.  Captain Cold was Central City’s true kingpin of crime.  But I was wrong on both counts—and I am very happy I was!

It is rare in this day and age to read a comic book that keeps you guessing and manages to surprise you.  Williamson threw quite a few curveballs in this issue which I absolutely loved!

So, who is the shadowy figure that Copperhead says is the true criminal mastermind?  I have no idea.  Kristen Kramer turned on David Singh and offered to defend Warden Wolfe—only that was a feint as well.  Kramer is really still working for Singh and spying on Wolfe.  Nice twist!

The last few pages where we’re led to believe Barry is either talking to himself or his dead mother fooled me, too.  As an old-school fan, it is so refreshing to see Barry and Iris starting to get closer again.  Can the Flash’s marriage eventually be back in continuity?  God, I hope so!  The sense of family that’s been permeating Williamson’s Flash in the past 6 months is both long overdue and dearly welcome.  It’s been a relief to see Barry reconciling with both Wally and Iris; a reaffirmation of family that’s been central to The Flash for decades.

For the past 2 issues, we’ve gotten a couple of flashback fill-ins from artists who made their names working on DC in the Nineties.  We had Nightwing’s Scott McDaniel last issue and now Scott Kolins returns in this issue to the book that made him justifiably famous as well.  Though not as detailed and glamorous as Carmine di Giandomenico’s artwork, Kolins remains a sturdy storyteller and one who can still bring vital energy to The Flash.

Joshua Williamson is building to big things on The Flash.  His plot twists are unexpected keeping you on your toes.  His characterization is smart, heartfelt and embraces the family at the heart of the Fastest Man Alive’s franchise.  The team of artists on this series is reliable with a nice balance between classic veteran storytellers and rising superstars.  With the eagerly-awaited “Flash War” coming up next, I strongly encourage anyone on the fence to jump on the bandwagon now.  Williamson’s Flash is on a hot streak and this book is only getting hotter.  Don’t miss it!