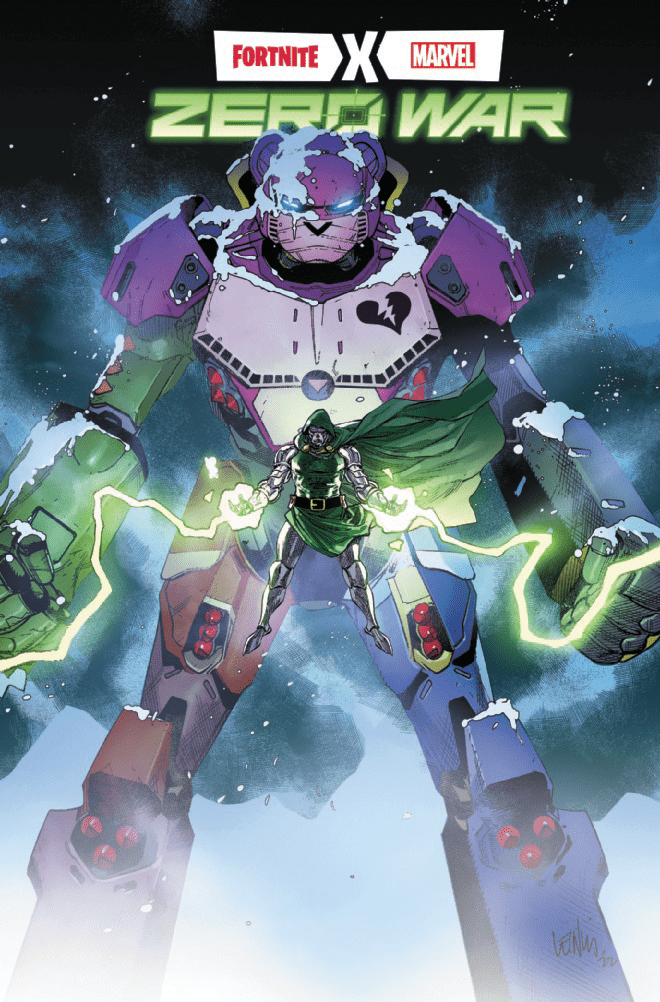 War has come to Fortnite Island, waged between the Imagined Order--a group of scientists who force multidimensional warriors to fight each other in endless time loops as “research”--and the resistance, known as the Seven. The Seven have been trying to rescue the fighters and prevent the Imagined Order from completely destroying the island, but they are technologically outmatched and in need of reinforcements.

This is the third Fortnite X Marvel issue I’ve reviewed for Comic Watch and if you’ve read my previous reviews, you’ll know the usual spiel I give about how this is a great series because you don’t need to know the characters of Fortnite to understand what is going on. Gage and Mustard’s writing has been great as always, and the artwork does a fantastic job of bridging the two worlds together. This issue is a continuance of the great work that they’ve done here.

With this being the series’ penultimate issue, it’s no surprise that there’s a lot of action taking place in this issue. It picks up (sort of) from where issue 4 left off, where Team Spidey follows Doom onto the Ice Moon. From there, the story goes through an interesting “Indiana Jones meets…. Fortnite” story, where there are ancient figures and beings that come to life after someone steps on a trap. This awakened the Ice King, in all of its glory tells Team Spidey about its history and tries to be a protector of the omniverse and as such, decides that Team Spidey needs to die. How thoughtful of him. 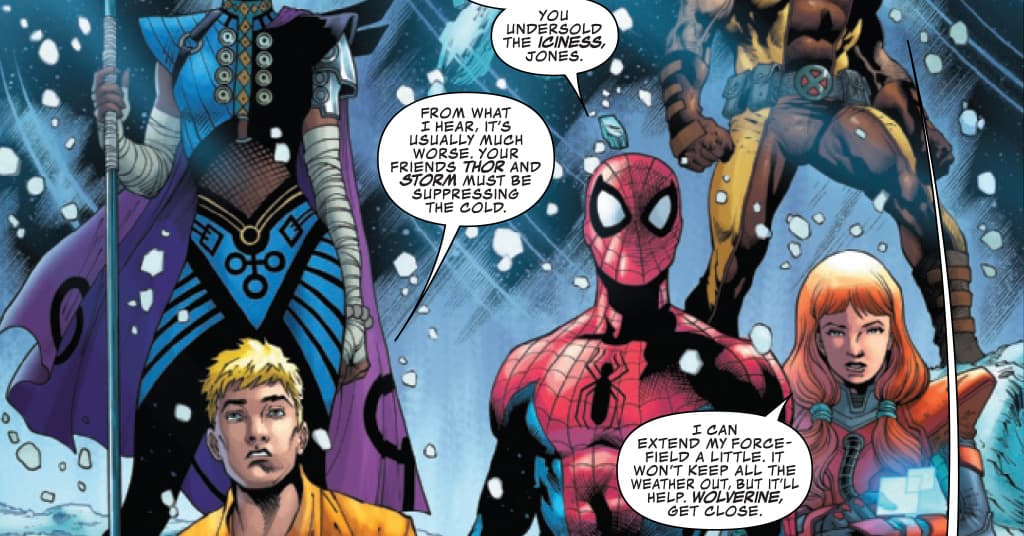 Now what I cannot understand is how and why Doctor Doom selected this place to escape to. He didn’t reveal any details in this issue so perhaps we will learn why in the final issue. But if it’s just to kill off Team Spidey, we need an explanation as to why he decided to go to the Ice Moon in this reality to do that, versus the many other places and ways he could have chosen.

The artwork for the action sequences was very well done. You can see the battle playing out in the front of your mind as though it was a movie, and the use of colors and composition did a fantastic job of illustrating the power and impact of each blow landed. It was interesting in how in one panel Doom seems to blow off Wolverine’s top half of the suit – I guess we all always like to see him topless, so that was a nice fan service touch there, whether it was intended or not. 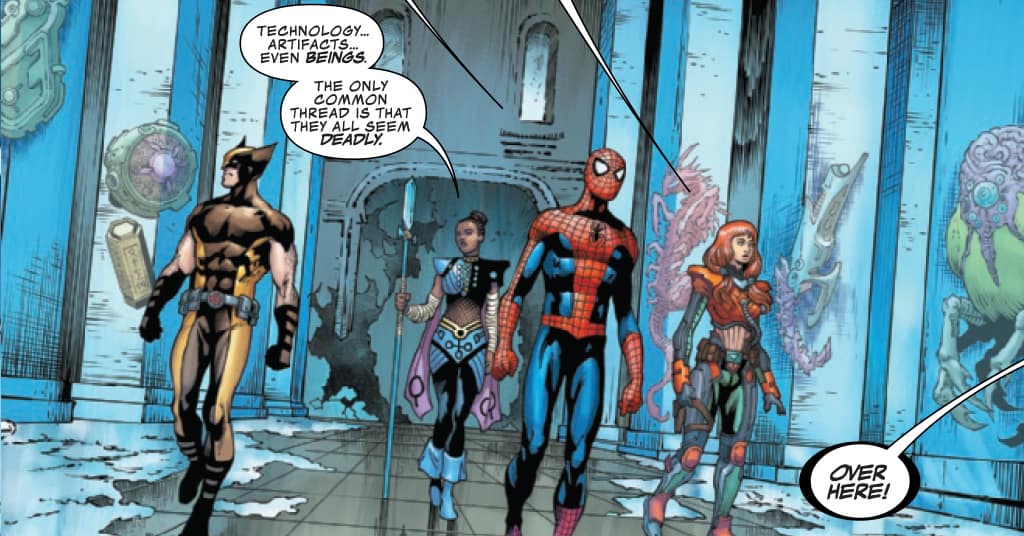 I loved the dialogue and interaction with the characters. Even though they are enemies, it seems like Team Spidey knows Doom well enough to at least predict what he will say (Shuri has a great line in this issue that is so comical – probably the highlight of the issue for me). And this will be the third time I’ve said this, but the art team needs to be given credit in taking such a daunting task of taking two worlds and drawing them in a way that they fit in the same universe without taking away who they are in their own. The compositions in the action sequences were fantastic, especially how they laid out the Spider-Man/Wolverine tag team against Doctor Doom and how they demonstrated how large the Mecha was compared to Doctor Doom and the rest of the teams. The angles really demonstrated this masterfully. 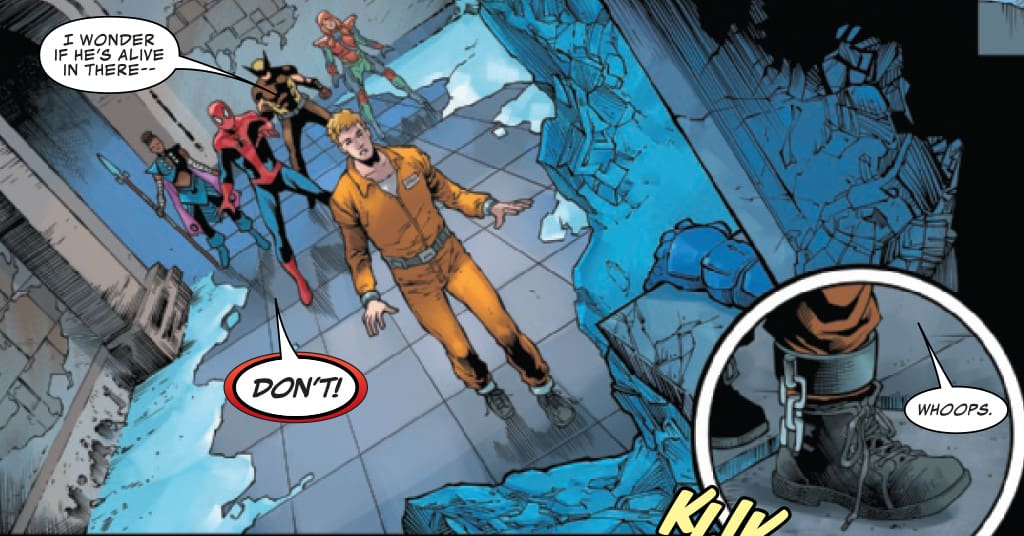 If there is any sort of criticism I have to provide, it would be that this is the second issue in a row where the story has focused on Team Spidey and not Team Iron Man. Issue 2 did a great job of going back and forth between the two teams, but the last two issues they’ve barely been mentioned. Perhaps issue 5 will be different and it will balance out in the end, but I was hoping to either see a better balance between these two teams in terms of page appearances or at least give a clearer indication of this in issue 2. Other than that though, this was a fantastic read

Once again, the creative team behind this comic knocks it out of the park. This issue starts off with a fun "Indiana Jones-ish" opening and ends with a major action-packed fighting sequence that is so enjoyable to read as well as take in the artwork.