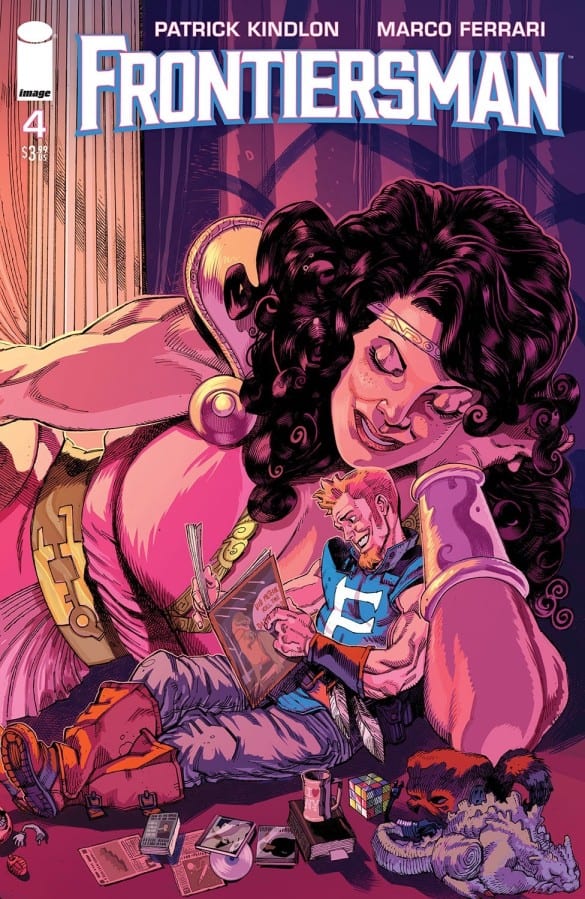 Frontiersman is visited by another figure from his past: an Amazonian giant who doesn’t care about blurring the line between hero and villain…or nemesis and lover! Light nudity, but nothing too explicit. Some love, but nothing too mushy!

What happens in the tree, stays in the tree– unless there is drone footage. FRONTIERSMAN #4 picks up in the wake of issue #3 with a detective commanding Frontiersman to come down from the tree after Valor is killed in self-defense. With this issue, Frontiersman is once again visited by someone from his past. In a response to “fan mail” in the back of the book, Patrick Kindlon notes that the first arc of the series is essentially A Christmas Carol, which I didn’t catch but now love the idea. Frontiersman’s third visitor is Bryn, or Bryn Fae Warrior Queen. She is a giant fae amazon– a faemazon. It is clear from the issue that Bryn the Faemazon and Frontiersman have a history. We learn that they are former lovers and enemies– frenemies with benefits. My immediate reaction was “Oh, like Wonder Woman,” but that comparison will always be drawn when there is an amazon warrior, but Kindlon puts enough care into his characters that this reaction is short-lived.

Kindlon provides any information that the reader needs. It is rare for a series four issues in to feel like it’s hundreds of issues into its run. Characters are unique but still play around with themes and tropes that you can find in any comic from the Big Two. Because of this, you get the sense that you have been familiar with this world for years. We get glimpses of the world in flashbacks throughout, but a particular standout for me was Bryn and Frontiersman stepping through portals at Stonehedge. This is a really cool visual but also plays into the idea that Stonehenge has some magical significance and possibly alludes to the myth that the landmark was created by Merlin with the help of giants. Byrn being a giant makes this even more interesting. Just because I don’t know everything about this world doesn’t mean that there isn’t an incredible world. Marco Ferrari’s art continues to do an excellent job fleshing out the world. I’m especially impressed with Ferrari’s ability to capture depth perception and the sheer scope of some moments.

FRONTIERSMAN #4 introduces readers to another person from Frontiersman’s past. What happens in the tree, stays in the tree!