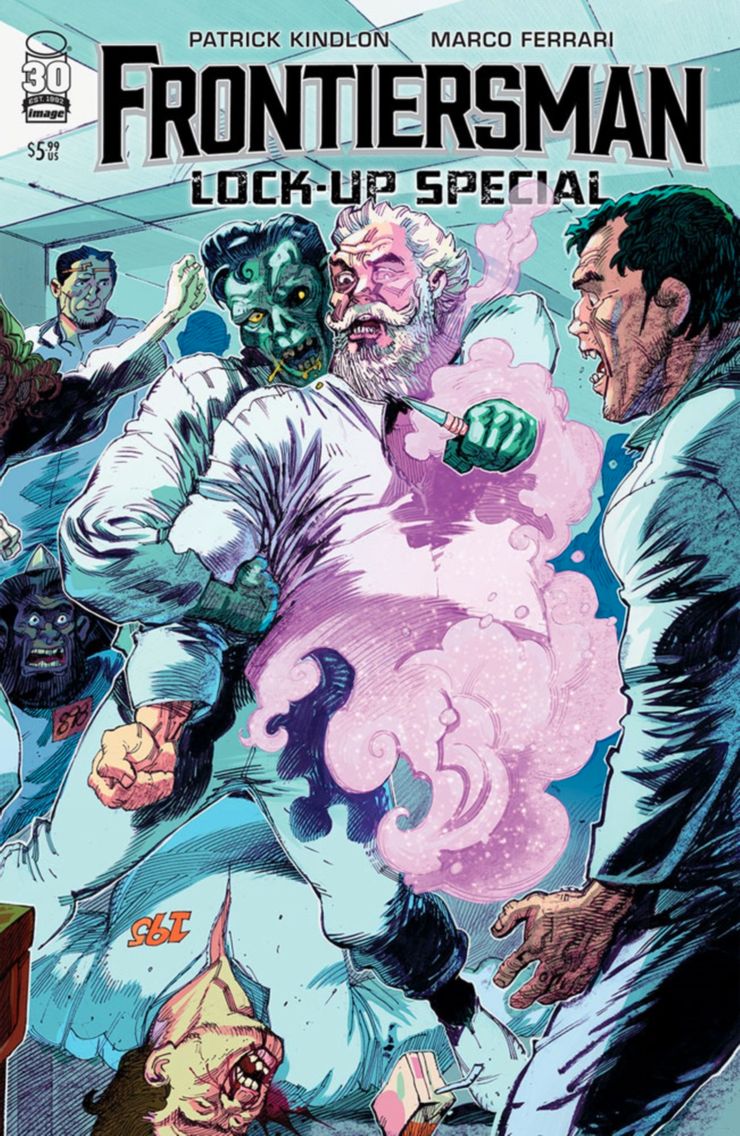 Following the big action of the regular FRONTIERSMAN series, our hero now faces the consequences! When Frontiersman is thrown in the county jail to await trial, he’s visited by an antihero who wants to free him—whether Frontiersman likes it or not! Featuring all-star guest artist NICOLÒ ASSIRELLI! This is a standalone DOUBLE-LENGTH superhero extravaganza for established fans and new readers alike!

Frontiersman was one of my favorite series of the past year. It was a nice break from the established and massive universes of DC and Marvel, though the universe of Fronterisman already feels like it has decades of history. Patrick Kindlon is joined by artists Nicolo Assirelli and Eva de la Cruz on pencil and coloring duties, respectively. The two artists are filling in on Frontiersman: Lock-Up Special for Marco Ferrari, and I think they did a great job retaining the look of the world Ferrari has given us but leaving room for their own styles to show. Jim Campbell also does an incredible job being the backbone of consistency with his lettering in this one-shot as well as the first five issues. This is a really cool world, and I really enjoyed seeing it through different styles.

Following the first five issues, Frontiersman is in prison while he waits for his trial. Kindlon doesn’t miss a beat with the social and political commentary on the industrial prison complex, which is something I really admire. A major theme of the first five issues was the fine line between being a hero and a villain, and I am happy to see that conversation continued in the one-shot. We also get introduced to two new heroes: Public Defender and Free Will. Public Defender appears to be an analog to Daredevil, though the only similarities are he is a lawyer who fights ninjas at night. Free Will is a ghost/spirit with a bone to pick with the United States justice system.

Frontiersman: Lock-Up Special includes a Queen Sphecidae backup story written by Kindlon with art by Gioele Filippo and colors by Patrizia Comino. I was really pleased with this addition because it gives readers a look at Frontiersman in his prime facing one of his classic foes: Queen Sphecidae. In addition to Frontiersman picking back up, it looks like the Frontiersman universe is being expanded with Gehenna, Antioch, and Public Defender. Readers will have to wait until September to read Antioch and then until 2023 for Public Defender. Luckily, readers can check out Gehenna in Image! 30th Anthology, which was released in April.

The Frontiersman returns in FRONTIERSMAN: LOCK-UP SPECIAL! The one-shot checks in on our imprisoned hero and gives readers a nice taste of what's to come.