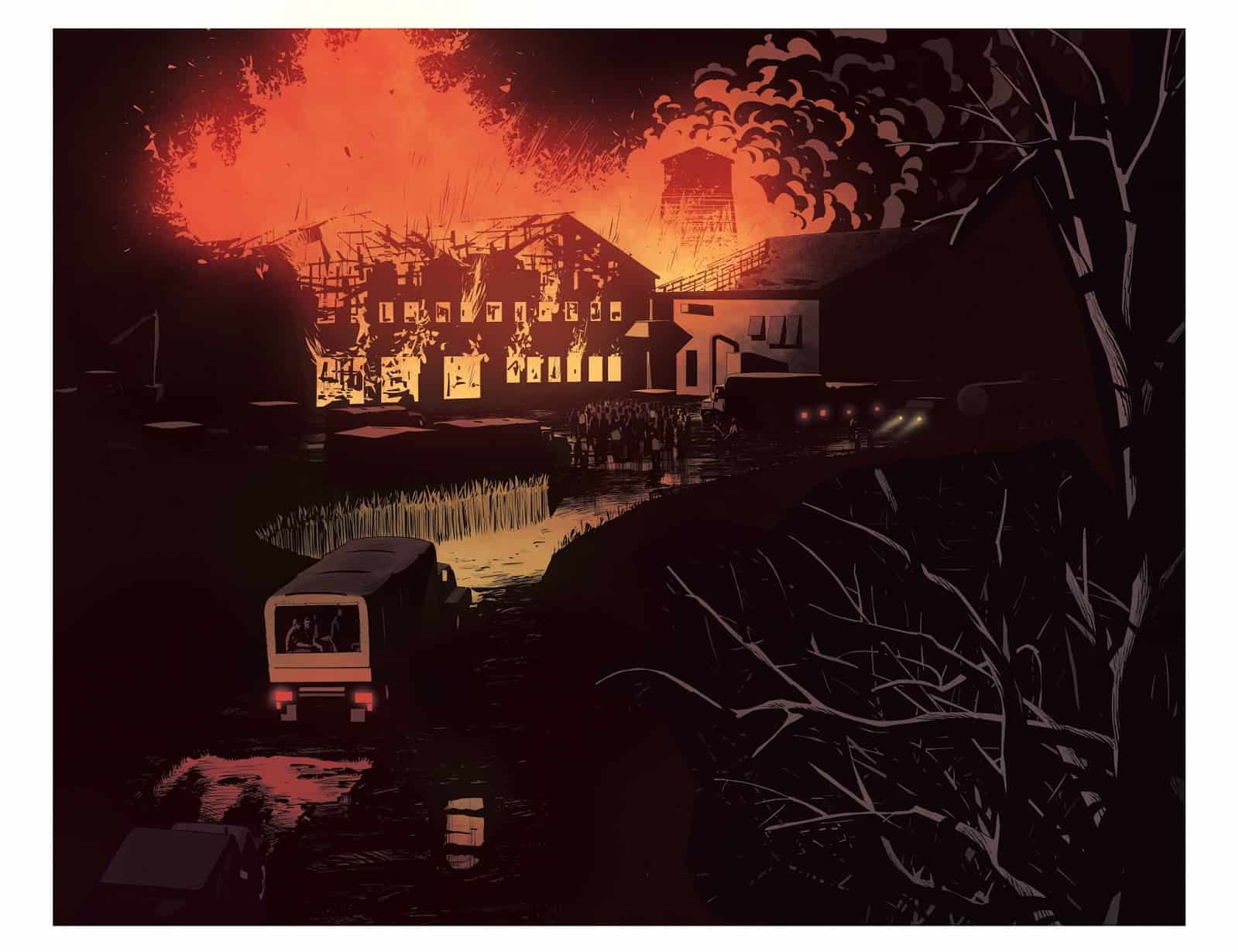 As Los Queridos round up those few who remain, for purposes unknown, Randy and Mal decide running south is no longer an option, the time to stand and fight is upon them.  Captured and separated, Randy is delivered into the hands of  La Querida’s mystery ‘cholo’ while Mal metes out her own justice.  The introduction of El Dorado, as well as one whose ‘mother had tasted the devil’s milk’, with dire consequences. 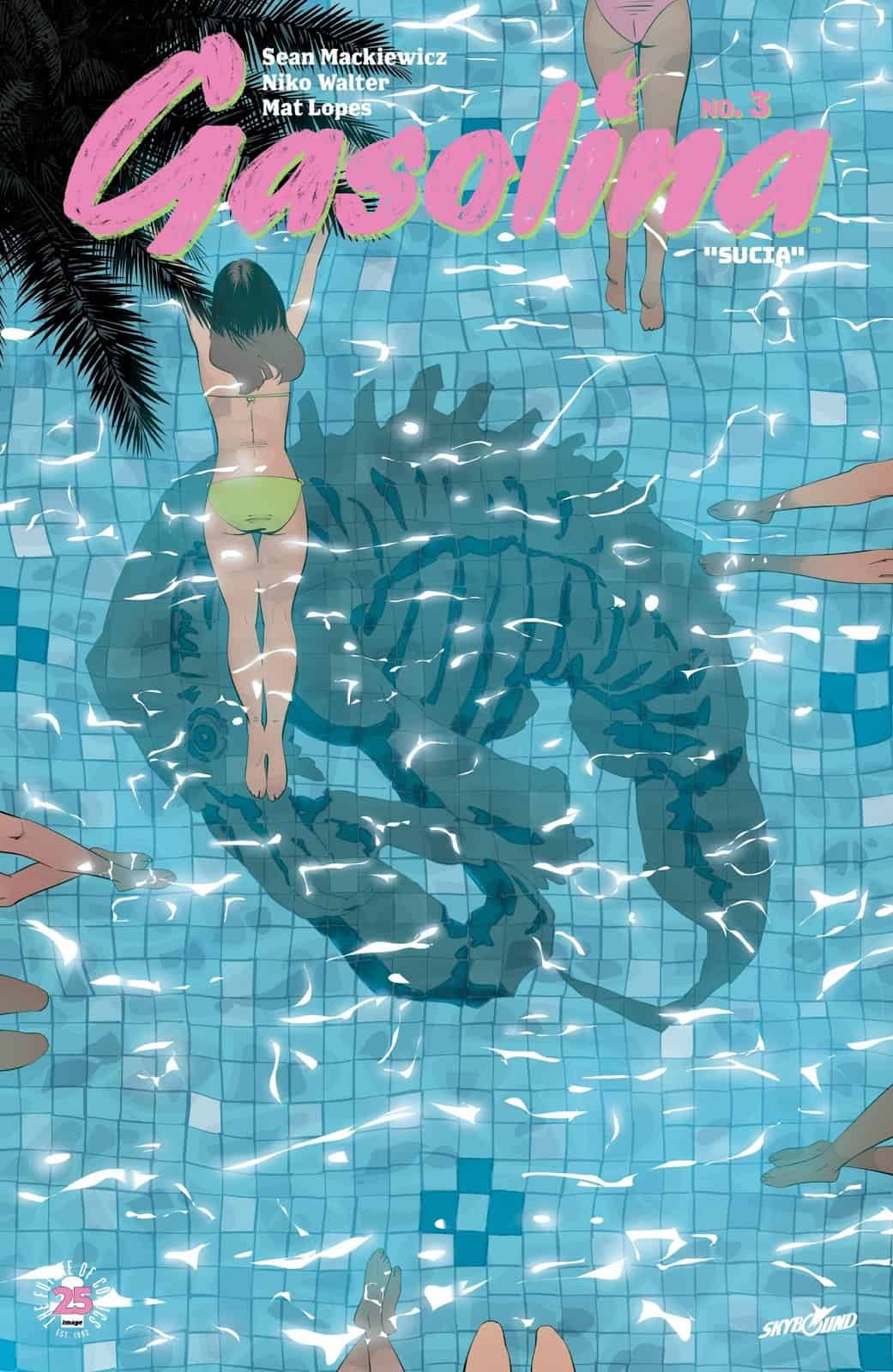 Gasolina #3 is part of a new endeavor by Image Comics and Skybound Entertainment to present crime, drama, and horror, by combining the ongoing drug cartel wars in Mexico, with soaring homicide rates and corruption, presenting a story twist, much like a mash-up of Aliens meets Narcos.  Each issue is only 20 pages, thus far, previous issues have been focused on building the primary protagonists, Randy and Mal, the strength of their relationship, and the sometimes horrific world they exist in.  Outside of Randy and Mal, the remainder of the story has primarily revolved around the mysterious Los Queridos, a cartel that mixes in more than drugs, money, and women, something much more terrifying and inhuman. 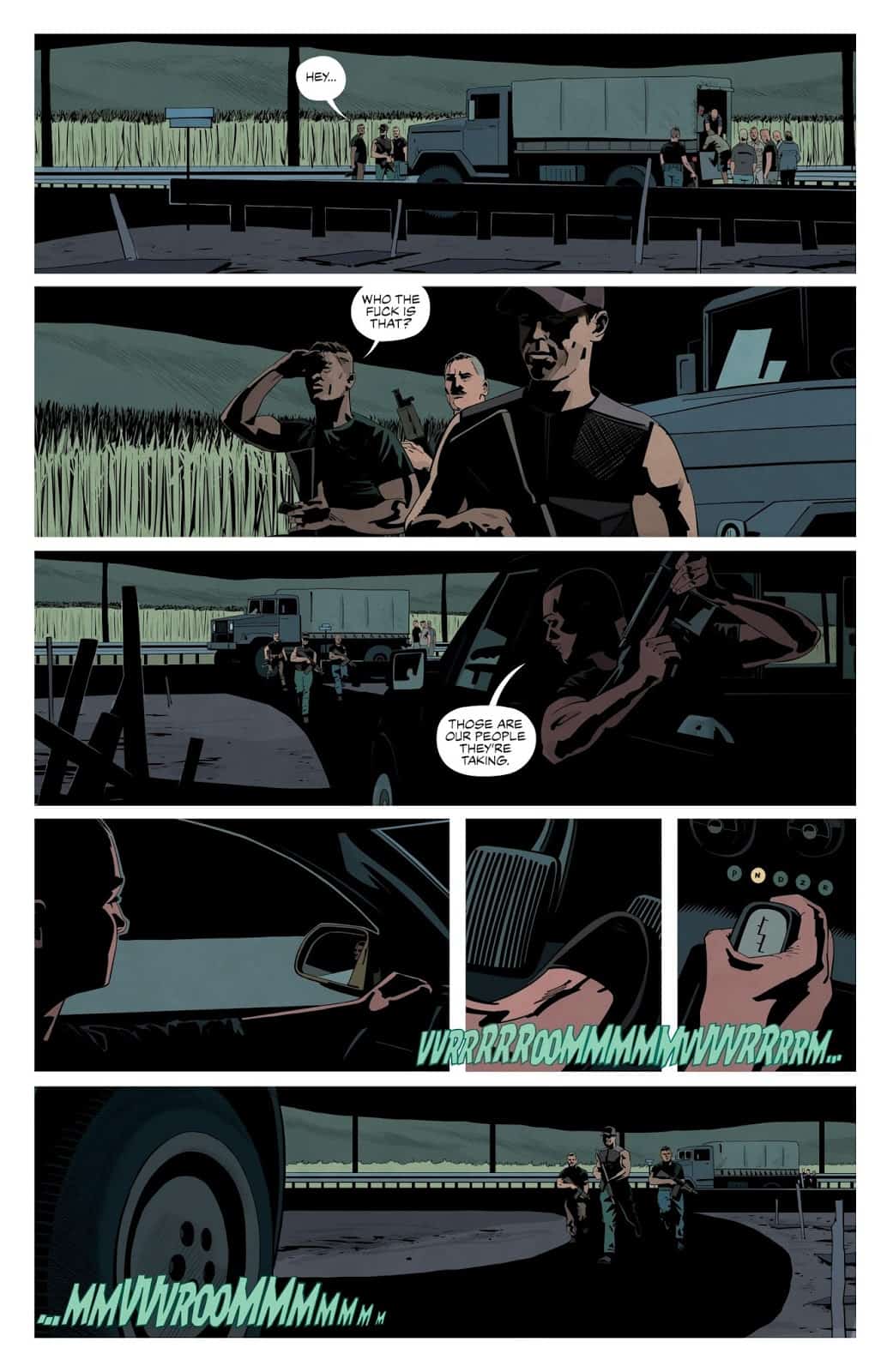 After the loss of much of Mal’s family and friends at the hand of Los Queridos, the families sugarcane fields and farmhouses ablaze, Randy and Mal are planning to flee south deeper into Mexico with more questions than answers, when they come upon a Queridos roadblock.  Watching in disbelief as people who have been living and working on the land of Mal’s ancestors are herded into trucks like cattle and in Randy’s mind, the likelihood is they are being hauled away for slaughter or sacrifice.  Mal and Randy, already spotted by the armed guards manning the roadblock, are forced into the decision to stay and fight, seeing this orgy of horror through to the end!  While Randy doesn’t put up a fight in the hopes of getting answers and finding out where the others are being taken, Mal takes an entirely different approach, making a scene, insulting the guards’ machismo, until Randy, hauled off with the others held captive, watches in desperation at what looks to be the end of his beloved Mal.  Much to the men of Los Queridos’ chagrin, Mal is not your average woman, she has obviously seen some desperate times, and desperate times call for desperate measures, which Mal deftly employs, murdering the armed men of Los Queridos without hesitation before they even know what’s taken place. 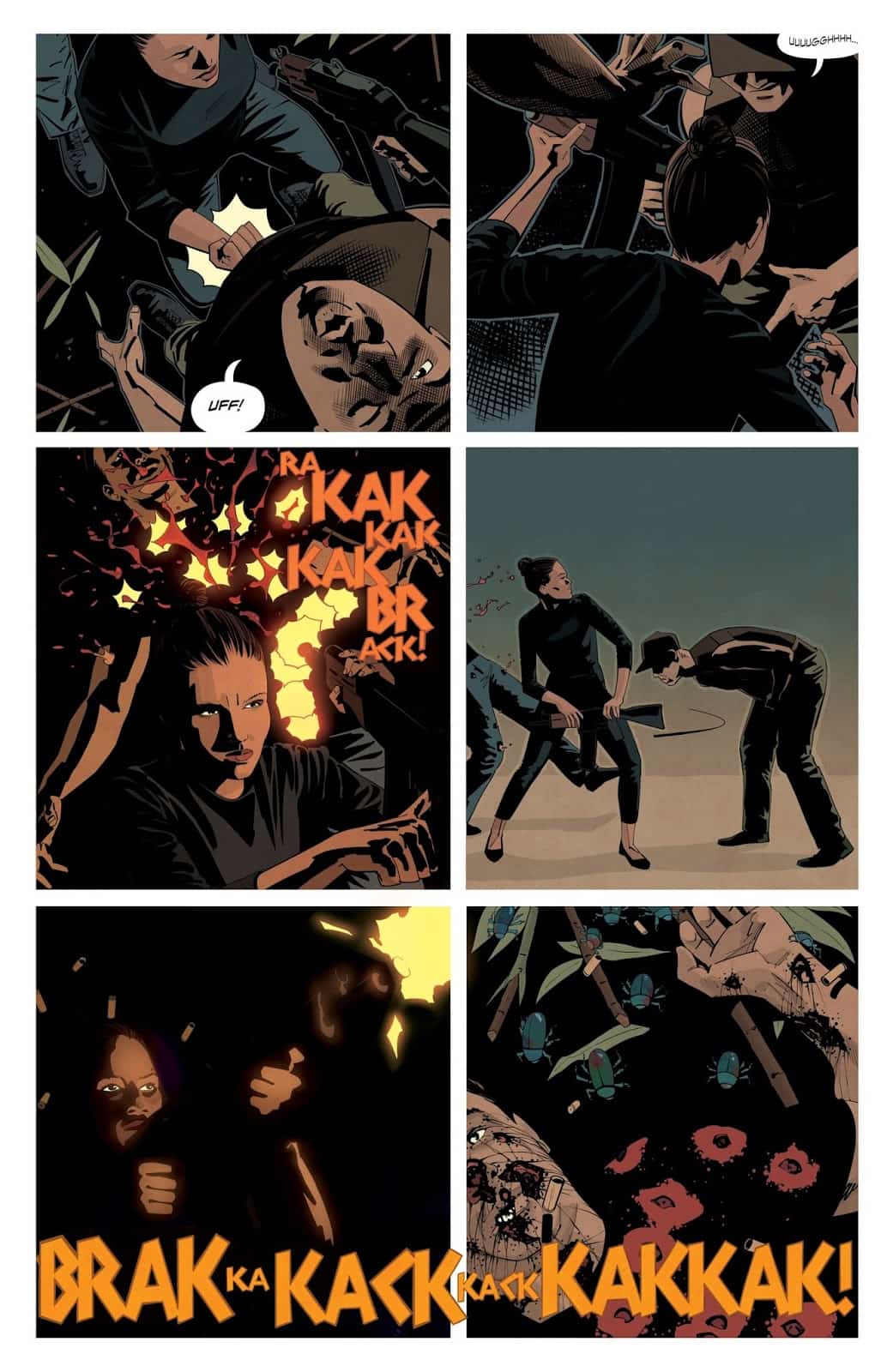 Randy is taken to where it all began, Mal’s uncle’s farmhouse, now nothing more than a blazing inferno, and the ‘cholo with the cross tattoos’ who seems to be in charge, at least at this level of Los Queridos, is preaching to all those who are being led to the inferno.  They are told they will begin clearing the land for some unknown purpose or they can die, he seems to care not which they prefer.  Randy speaks up in hopes of saving some lives, playing the hero, seeking answers, and is shocked by the ‘cholo’s’ response.  Pulling Randy into the light of blaze, the ‘cholo’ speak directly to him of Mal, his knowledge of her exploits, her family, and his promise to deliver them both to La Querida before the night is over if Randy doesn’t give up her whereabouts leaves him shaken to his core.  He sends Randy away with a series of racial slurs to be kept with the woman as an insult to his manhood. 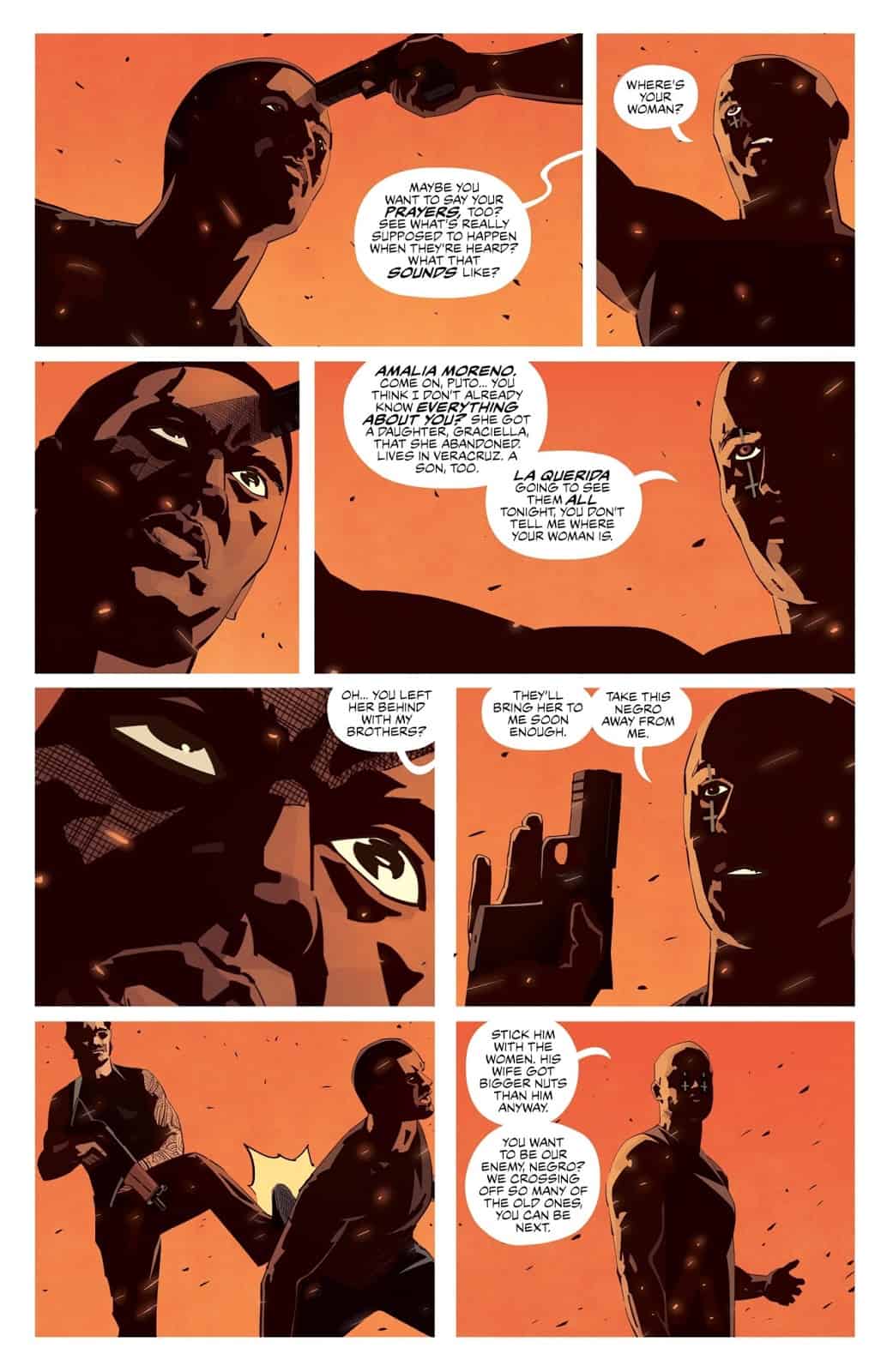 Writer Sean Mankiewicz shifts gears with the introduction of El Dorado, his glamorous estate, poolside, surrounded by women in bikinis and an endless supply of cocaine.  Dorado even says he needs his woman to have a ‘golden nose’ to be able to handle the product as his Russian prostitute starts bleeding from her nose.  Standing dumbstruck, she begins wandering off, stumbling until she crumbles unnaturally into a heap poolside.  Dorado is too busy with his other whore, paying little attention to the Russian as a grotesque, slime-covered, snake-like protrusion, similar to a long fat phallic shaped stinger with a claw filled maw slowly works its way out of her mouth.  As Dorado tends to his lady, what once was just another drunken Russian whore serving a Mexican drug lord, now balancing on unsure feet, the slimy unhuman parasitic monstrosity clearly in control, with its appetite obviously targeting Dorado begins staggering in his direction.  Dorado is shocked, falling backward, a shattering glass table breaking his fall! 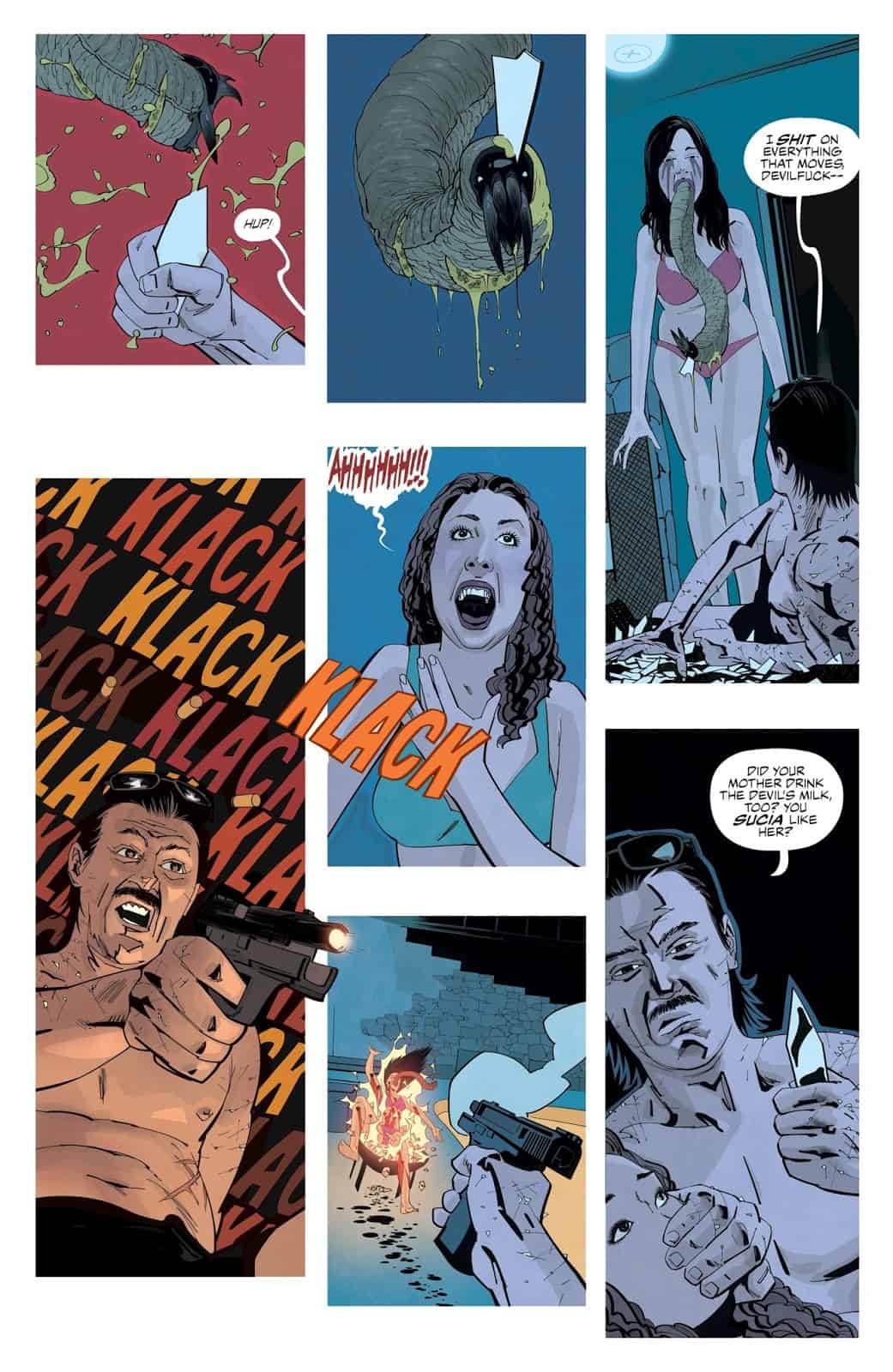 He swings a shard of glass striking the mawkish worm-like beast pausing its advance long enough to grab his gun unleashing shot after shot into the atrocities host until she collapses into the poolside fire pit, bursting into flames!  Dorado, now surrounded by armed guards, tells him, men, the whore was unclean, that she was one whose ‘mother had tasted the devil’s milk’ and that from this day forward they must all be checked, they must all be clean! 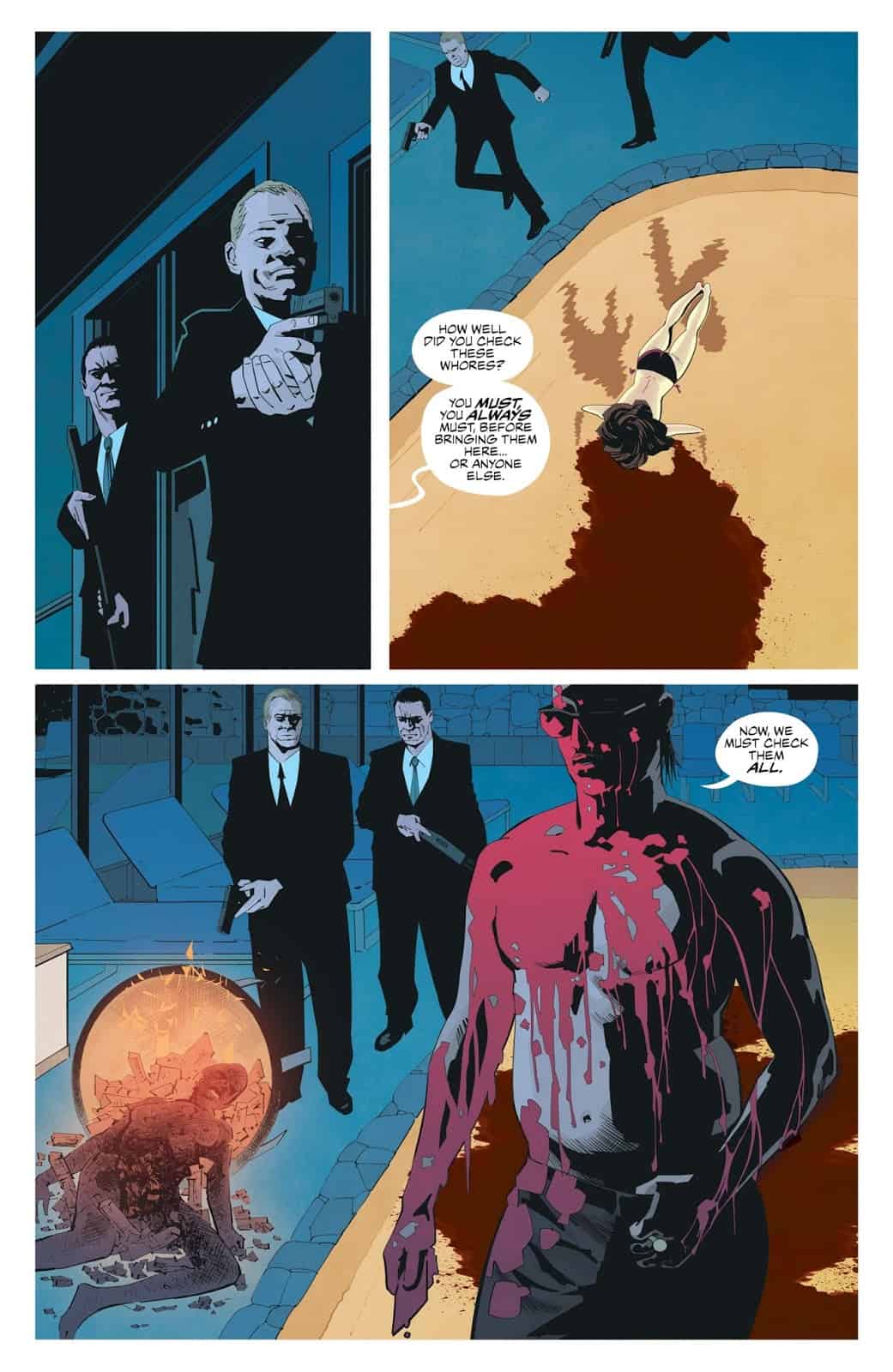 Members of Los Queridos search the sugar cane fields for Mal, and this panel speaks for itself, foreshadowing what is to come, after she silences one the Queridos cartel members, with its dying alien squawk, presumably a call for help before making her final appearance, exiting the sugar cane, clearly on a mission. 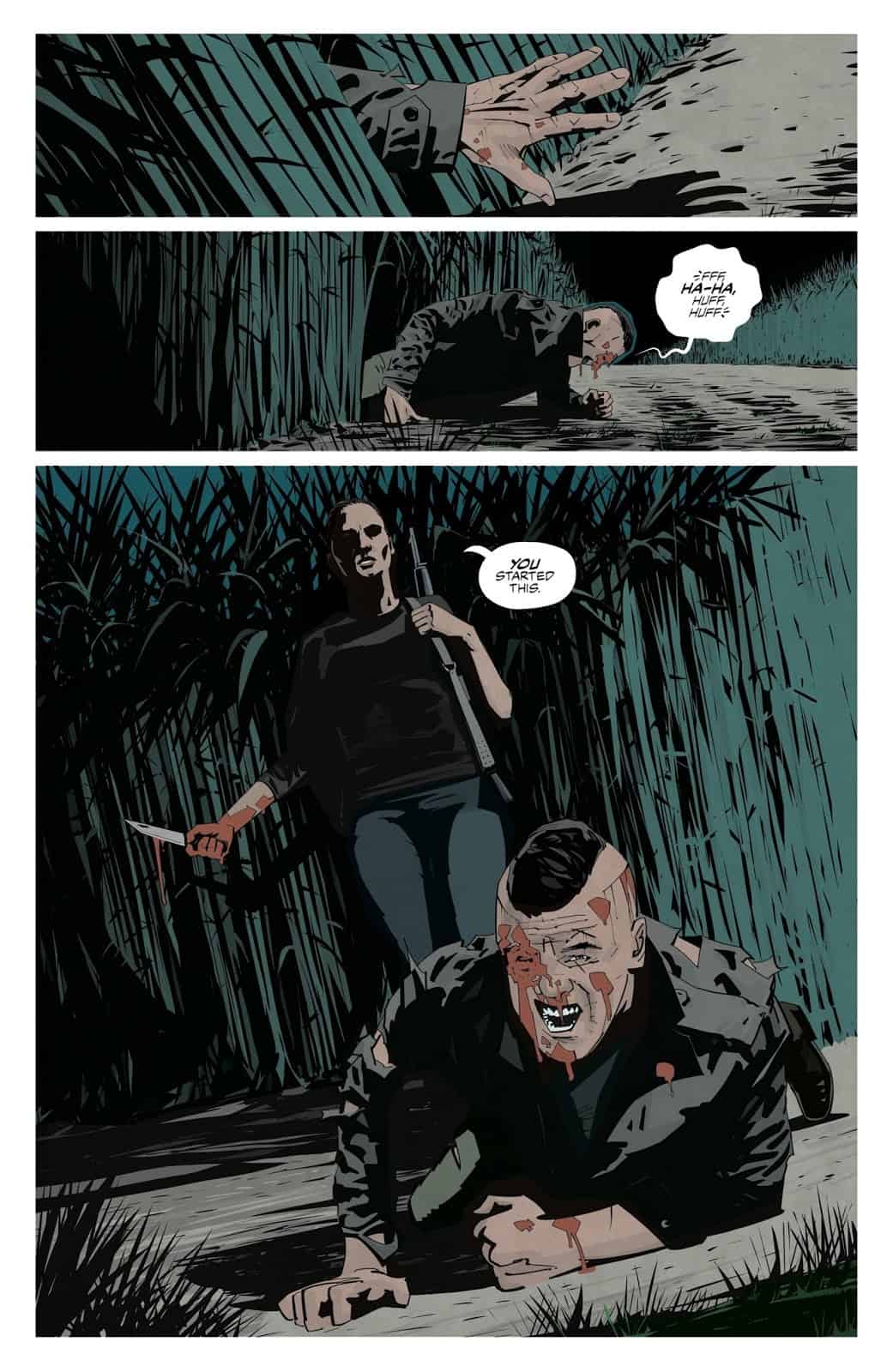 Randy and Mal become separated attempting to flee.  While Mal successfully dispatches of members of the Los Queridos Cartel, making her way back to Randy.  Randy’s attempt to help Mal’s people, those who helped farm her uncle’s sugarcane, gives us an inside look at some of theology and beliefs of Los Queridos as seen below.  We are also introduced to what is probably one of many drug lords that will appear in Gasolina, El Dorado, who doesn’t seem nearly as shocked by the Russian whore’s metamorphosis into an inhuman atrocity which raises more questions along with his reference to those ‘whose mother’s drank the devil’s milk’.  While the story leaves the reader with as many questions, if not more than answers, it does set the pace for what is to come.  Mal is coming for Randy, and it is clear, she is not concerned with who or what Los Queridos is, she is a force to be reckoned with. 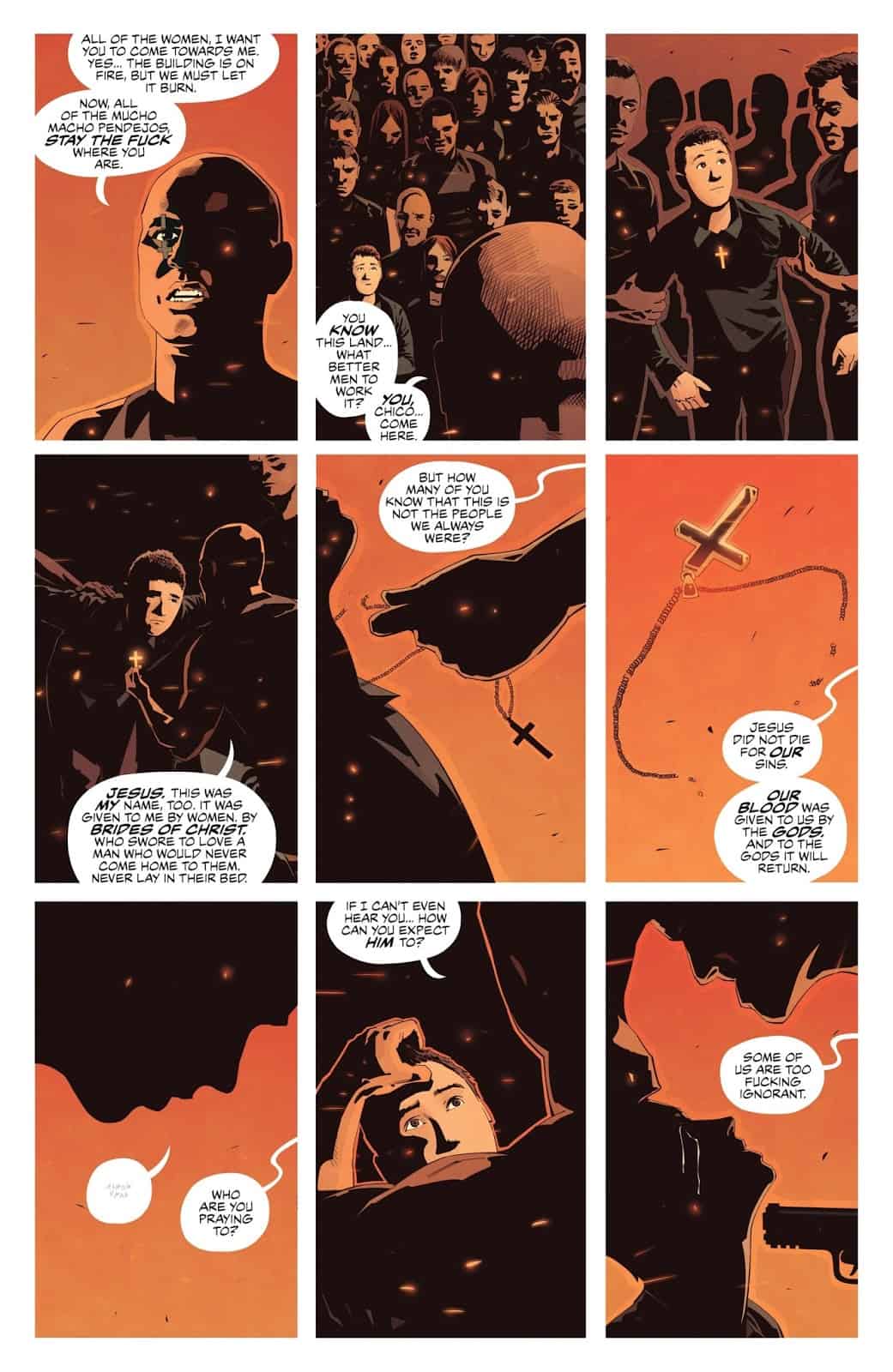 Final Thought: Mankiewicz really brings the first two issues together with #3!  His writing had established the primary characters, but it wasn’t until Gasolina #3 that the story really begins to unfold!  So many questions are raised,  but after seeing Mal in action and El Dorado dispatch of the abomination sent to kill him, I presume, I now hunger to know more about the Los Quiredos Cartel, what there motivations and origins are, and I’m bursting to see what’s next for Randy and Mal.  Plus, I hope El Dorado seeks retribution for the foiled assassination.  While the questions just continue to build, the creative team of Mankiewicz and Walter deliver with one explosive panel after another!  This is exactly what I’ve been waiting for!