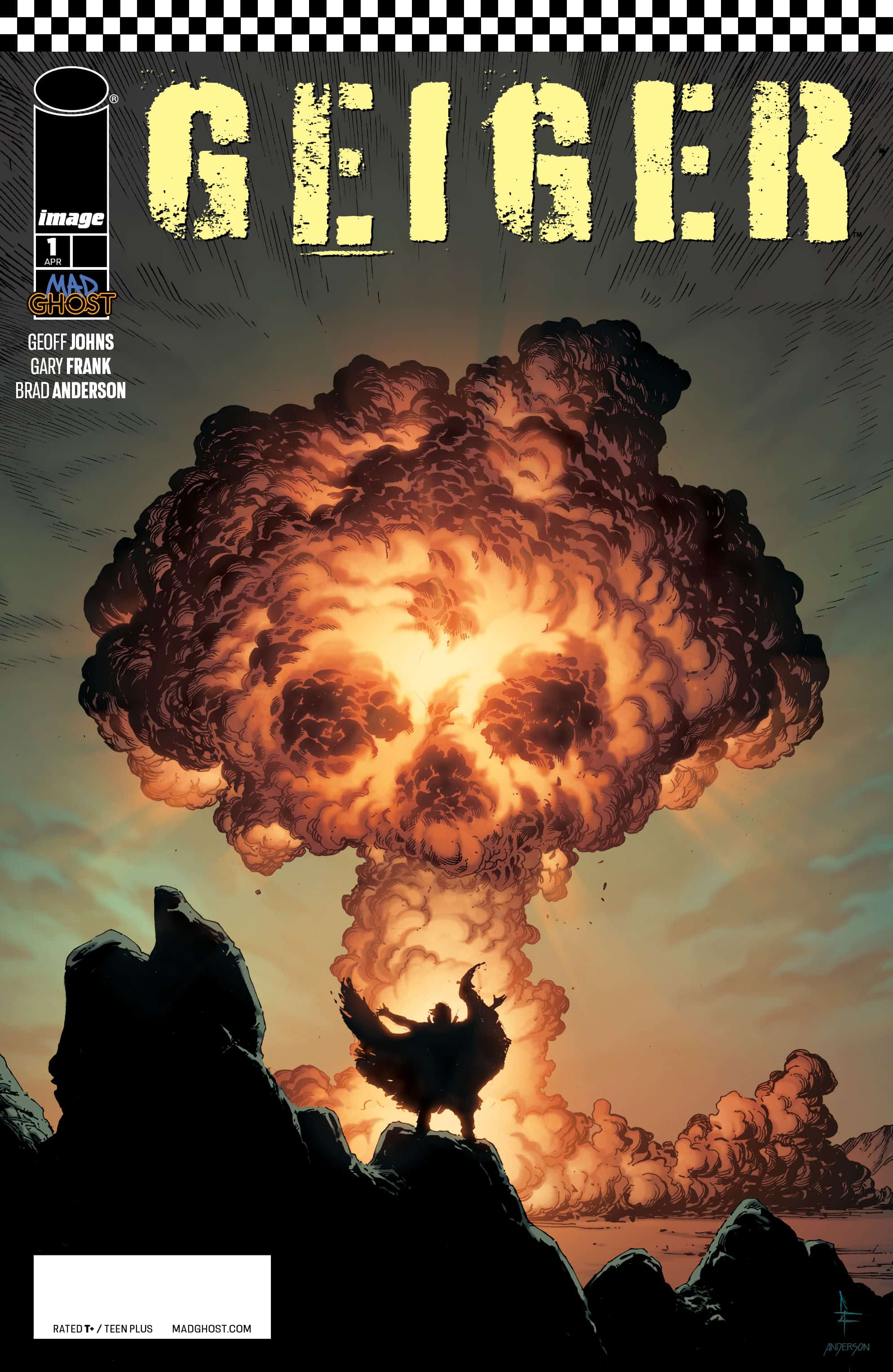 The Glowing Man. The Radioactive Man… “Joe Glow.” There have been a lot of names given to the legend who lives out in the open post-atomic air without a radiation suit. But twenty years earlier, he was just a man named Tariq with a family to protect… then the bombs started falling.

Who is Tariq now? How did he survive an atomic blast? And will he ever be able to see his family again, trapped within the safety of their fallout shelter? Welcome to the world of Geoff Johns, Gary Frank, and Brad Anderson’s Geiger! 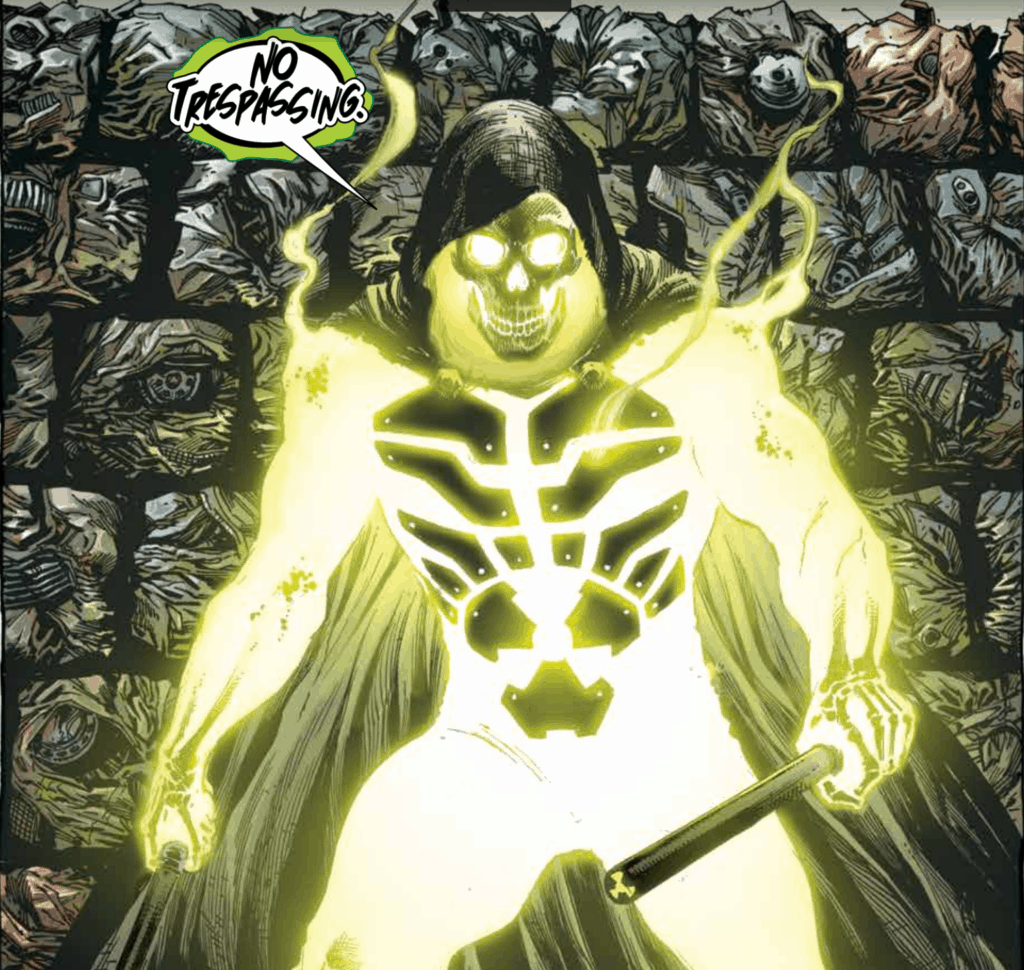 Geoff Johns is always at his best as a writer when he’s playing with others’ toys: the JSA, Green Lantern, the Flash. He made his career not only by being a first-rate storyteller, but by an innate ability to hone in on what makes a particular character work, and expound upon it to great effect. Now, though, as accusations of bullying and racially insensitive behavior on the set of Justice League threaten to upend his entire career, Johns appears to be hedging his bets and branching out from DC a bit just in case, and establishing his own brand with Geiger. And though this isn’t quite the first time he’s chosen to fly without a parachute, it’s certainly the most high-profile.

Unfortunately, it’s very difficult to separate the artist from the art at this point for Johns. And from that perspective, a wealth of problems begin to present.

The world of Geiger is absolutely nothing new: post-atomic war; few survivors remain; humanity is divided into tiny, hungry fiefdoms; a cruel tyrant lords over them all; there’s an urban legend of a hero out on the plains who might just save them all. There are roving bands of raiders called “organ people.” Ho-hum. There is absolutely nothing original happening in this comic. Geiger reads like Johns was making a bucket list of post-apocalyptic tropes, or checking them off one at a time to ensure he hit all the familiar notes. It also reads like a story that was put together with quite a bit of haste in order to give readers something familiar, a bit of comfort food in an attempt to shore up his damaged reputation.

There simply isn’t enough to hang a reader’s interest on, no hook, nothing particularly new or interesting to say. Tariq, through some quirk of his survival, has gained the ability to glow like a radioactive green skeleton (see: Batman baddie Dr. Phosphorous), and can survive the irradiated fallout wasteland without a radiation suit. That gives the book a nominal superheroic vibe, but Johns has made it pretty clear that this isn’t a superhero book. There’s major tragedy brewing – Tariq’s family is allegedly still in their fallout shelter twenty years later, and he of course hasn’t been able to see them. He’s alone with a two-headed mutant wolf, desperately clinging to the idea that somehow, someday he’ll be able to reunite with his loved ones. That’s a nice concept, one that has a significant amount of pathos to it, but right now it’s more of an idea than a story beat with any real meat on it. We don’t know enough about Tariq yet to really care if he’s ever reunited with his family. And with this being a six-issue miniseries only, it’s very crucial that that connection with the reader be made early on. There’s no time to spin wheels with table-setting and worldbuilding alone, crucial as those may be. Johns needs to walk and chew gum at the same time, and just doesn’t accomplish that in Geiger.

Curiously, Johns was able to complete his creative team trifecta by bringing his Doomsday Clock collaborators Gary Frank and Brad Anderson with him. These are big-name creators at the top of their game, and to be sure, Geiger looks utterly fantastic. Frank’s art, top-shelf though it may be, might not be quite the spark this series needed, though. He brings a certain sense of prestige to whatever project he’s working on, and that’s not quite what Geiger requires. By dint of the world it exists in, Geiger should feel big and wild and unpredictable. The uncanny valley in which Frank resides simply doesn’t feel right here.

There’s also a problem that Tariq – who’s supposed to be of Middle Eastern descent – has absolutely no Middle Eastern features, and instead looks like a middle-aged white man with a weird tan and thinning hair. If Tariq’s wife hadn’t called his name at the beginning of the story, or the vicious racism he experiences at the hands of his neighbors hadn’t happened, I honestly wouldn’t have realized he was a POC. That’s very much on Frank, who needs to do better. It’s also on Image for letting this fly; whitewashing Tariq’s Middle Eastern features with Caucasian ones is a monumentally racist act whether or not it was intended as such. I have a difficult time believing that at no point in the creative process, nobody caught this. And the fact that it did fly all the way to publication puts even more fuel on the fire that behind the scenes, Johns was instrumental in protecting and coddling racially insensitive behavior on the set of Justice League.

There’s a narrative at play here, but Geiger is only part of it. It’s the story of Geoff Johns’ fall from grace, and it’s playing out in real time throughout the pages of this comic.

Geiger is a comic by a formerly unstoppable writer scraping the bottom of his personal creative barrel. It has nothing original to say, weak characterization, and an uninspired setting. Hampered on all artistic fronts and guilty of whitewashing a POC, this is a comic to miss.