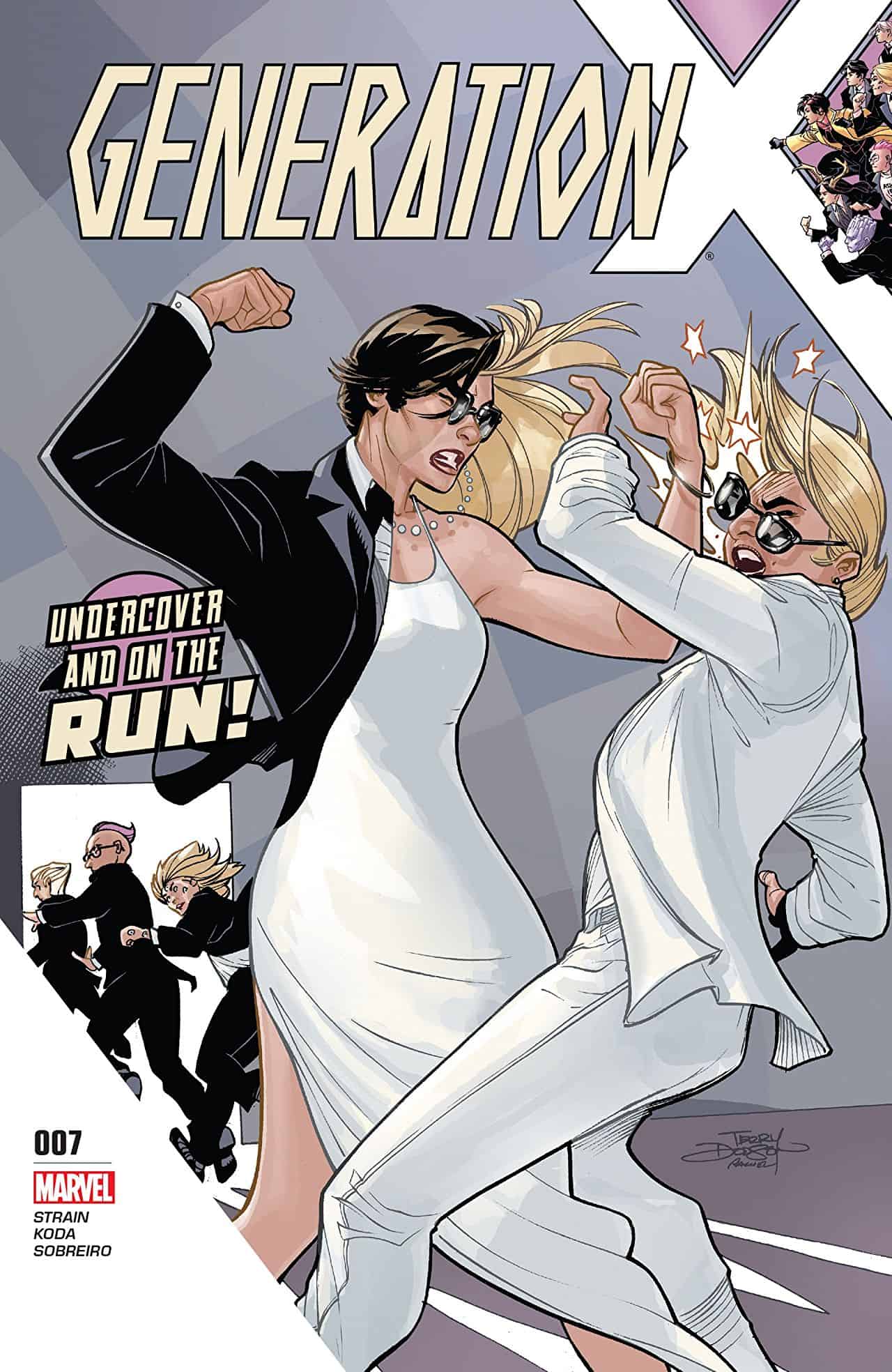 Kid Omega, Morph and Hindsight attend an auction full of Super-villains held by Kade Killgore. Meanwhile, Chamber and Jubilee patrol around Central Park in hopes of finding and defeating M-Plate. Jubilee shared her fears and frustrations about losing control over her vampirism to Chamber. The two then encountered a civilian being mugged. They saved the civilian and decided to de-stress by extending their patrolling duties and do a few more superhero stuff just like old times. Back at the auction, Kade sells a canister full of deadly Nano-Sentinels to the Fenris Twins. The 3 Gen X boys were not happy with the item falling into the hands of the evil twins and finally decided to steal it from them.

Kid Omega, Hindsight and Morph discuss and review their plan to steal the Nano-Sentinels from the Fenris Twins. Kid Omega uses his power to have Andreas think he needs to use the toilet. Morph goes in and uses his power to turn into Andrea. He is almost exposed when Andreas touches his skin noticing something is off with Morph’s (In Andrea’s form) skin. Hindsight saves Morph, just in time and gives him a little pep talk. 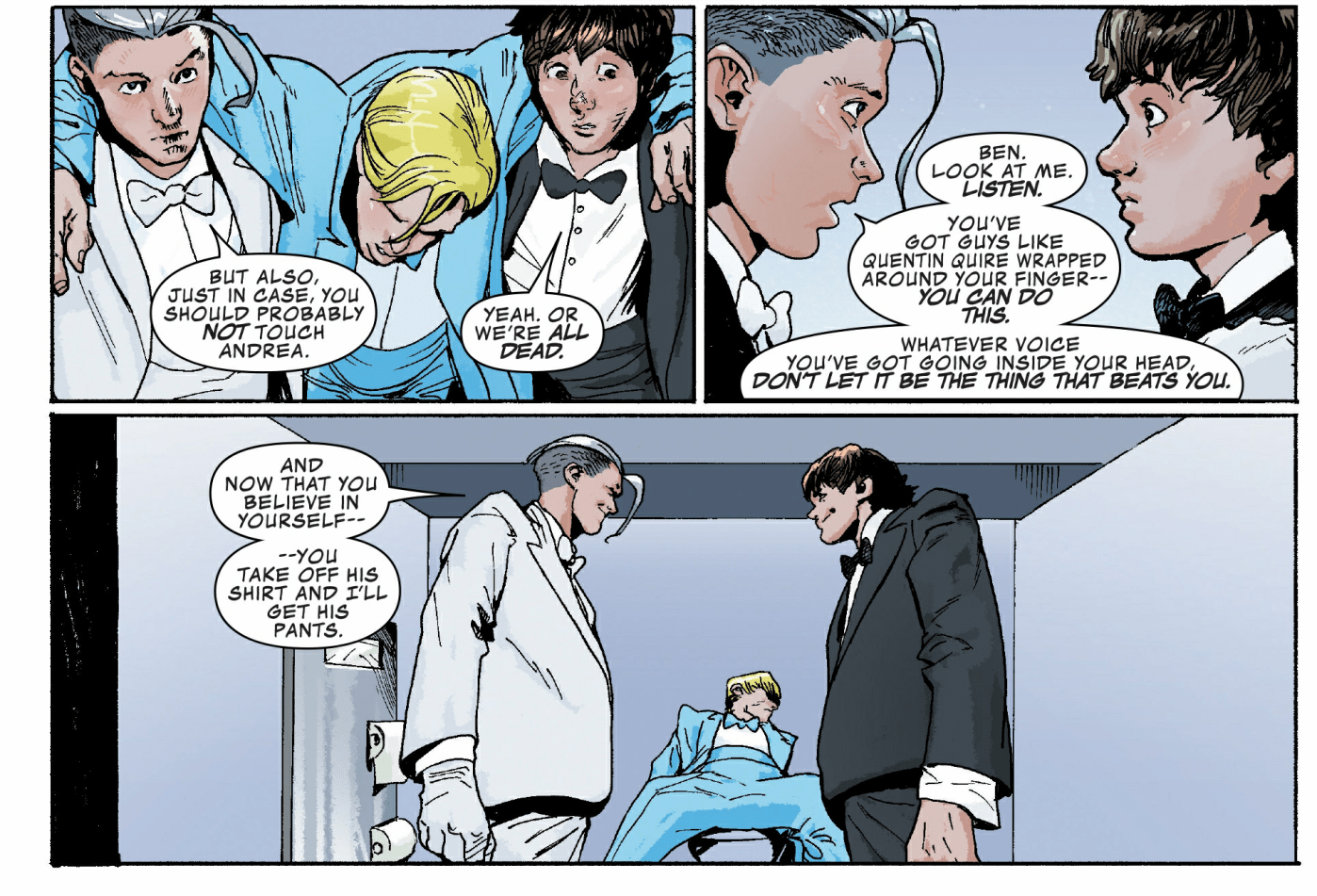 Morph comes out of the toilet in the form of Andreas meeting up with the real Andrea. Meanwhile, Hindsight approaches Kid Omega, asking what the deal was between Kid Omega and Morph’s relationship. With Hindsight’s question, Kid Omega realizes why Hindsight used his powers to invade his privacy earlier (back in issue 6.) Kade Killgore interrupts the conversation and tells both of them that he has been unto them and knows they are still part of the X-Men. The two Gen X’ers then realize that Morph is in trouble. Kade uses a psychic dampener to stop Kid Omega from using his powers to warn Morph. Kid Omega sarcastically praises Kade for figuring out that they were still part of the X-Men and guesses that the Nano-Sentinels was only a bait to expose them. Kade explains that while they are correct that it was a decoy, the canister was never filled in with Nano-Sentinels but instead with plain Saline Solution. He further tells them that their friend Morph is indeed in danger and will probably die. Back at Morph’s point of view, Andrea exposes him and reveals that he knows that Morph (In Andreas form) is an impostor. Morph then transforms into another supervillain, Mandrill and takes the canister from Andrea’s hand. He then tries to escape and causes chaos between the supervillains within the auction house as a distraction. Back to Kid Omega and Hindsight, Quentin asks Kade what is the point of all of this. Kade tells him that he only wanted to know if Quentin is back with X-Men and further tells them that at the end of the day, Kid Omega is toxic to the X-Men and is even equivalent to a Nano-sentinel. Their talk is then interrupted by the Alarm caused by the riot Morph started earlier. Kade tries to escape with his bodyguards.  Morph who was hiding catches Hindsight’s and Kid Omega’s attention. They then formulate an escape plan, which leads them to the idea to escape to one of Kade’s secret passages within the building. Hindsight tries to use his powers to find access to the secret passage but has difficulty using it. Morph then encourages Hindsight and tells him to relax and just listen to his voice. Hindsight’s powers kicked-in and the boys are able to escape the premises.

Back at the Xavier Institute, Chamber and Jubilee finally arrive home after taking out a few muggers to pass time that evening. Jubilee expresses her gratitude towards Chamber for having their little superhero moment at the park. She explains how that moment had her forget her vampirism and tell Jono how happy she is to have him in her life. Jubilee then lies on Chamber’s shoulder when all of a sudden she bites her own tongue. She then asked if Chamber could watch baby Shogo while she tries to check her tongue. Jono looking frustrated looks over at Shogo who laughs at him to which he replies that he needs to pull himself together before everything goes out of control. 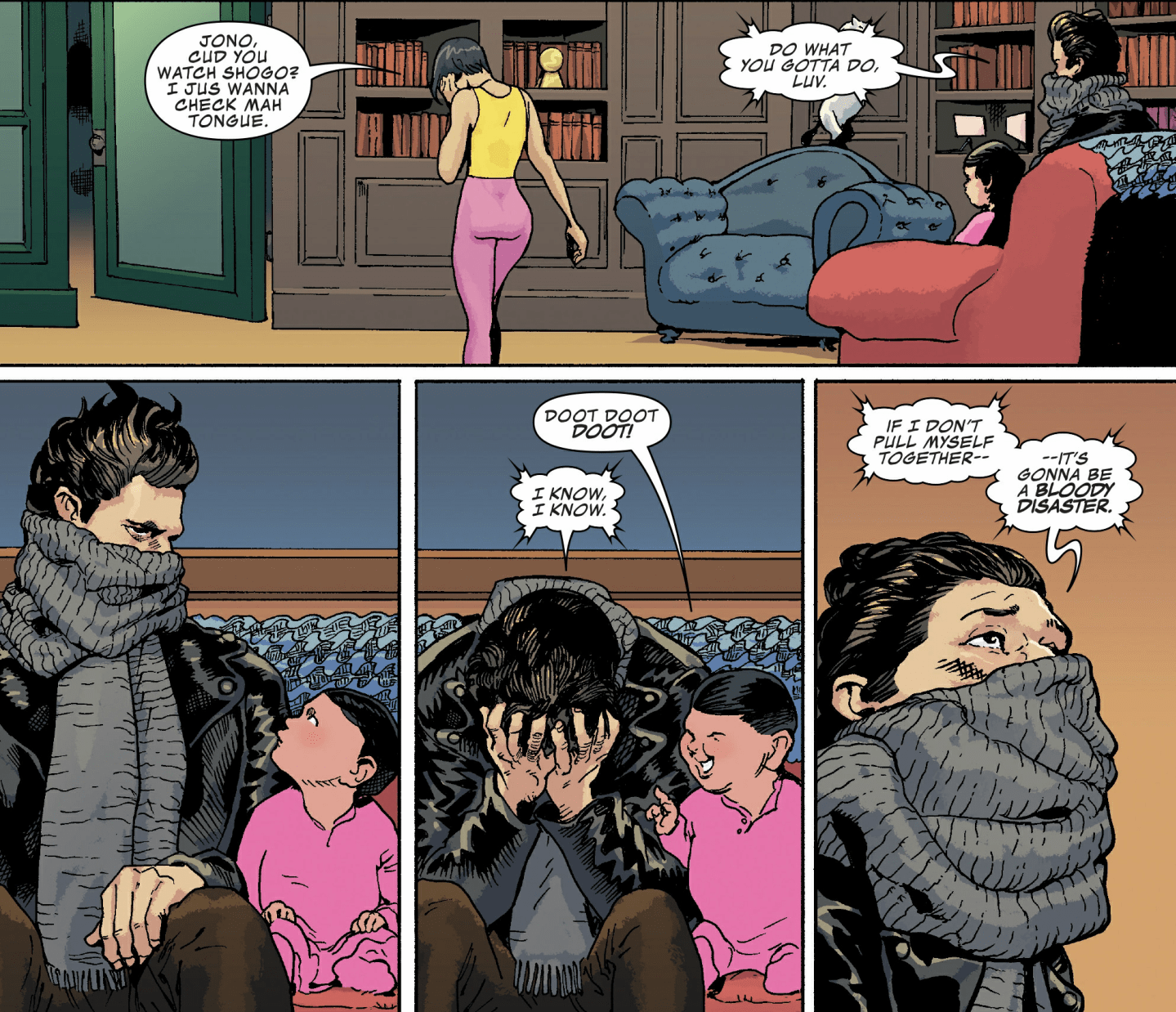 Later that evening we see the 3 boys arriving safely at the Xavier Institute. Hindsight calls Morph’s attention telling him that he now owes him a movie. Morph responds that he’ll find something indie and in which Hindsight replied that he is looking forward to it. While Hindsight leaves the 2 heading to his room, Kid Omega knocked some senses to Morph stating the obvious fact that Morph and Hindsight are attracted to each other. Kid Omega pushes Morph to actually do something about it. Morph chases after Hindsight and tries to grab his hands. Hindsight’s reflexes manage to avoid Morph’s advances and ask him what’s up. Morph then hears Cyclops voice in his head saying that he is not ready yet (An imaginary voice that has been bugging him from the start of the book.) The book ends with Morph looking disappointed, lying on his bed in a fetal position, while Kid Omega pokes fun at him saying that the difference between the two of them is that he knows what he wants and goes after it while Morph, on the other hand, doesn’t. 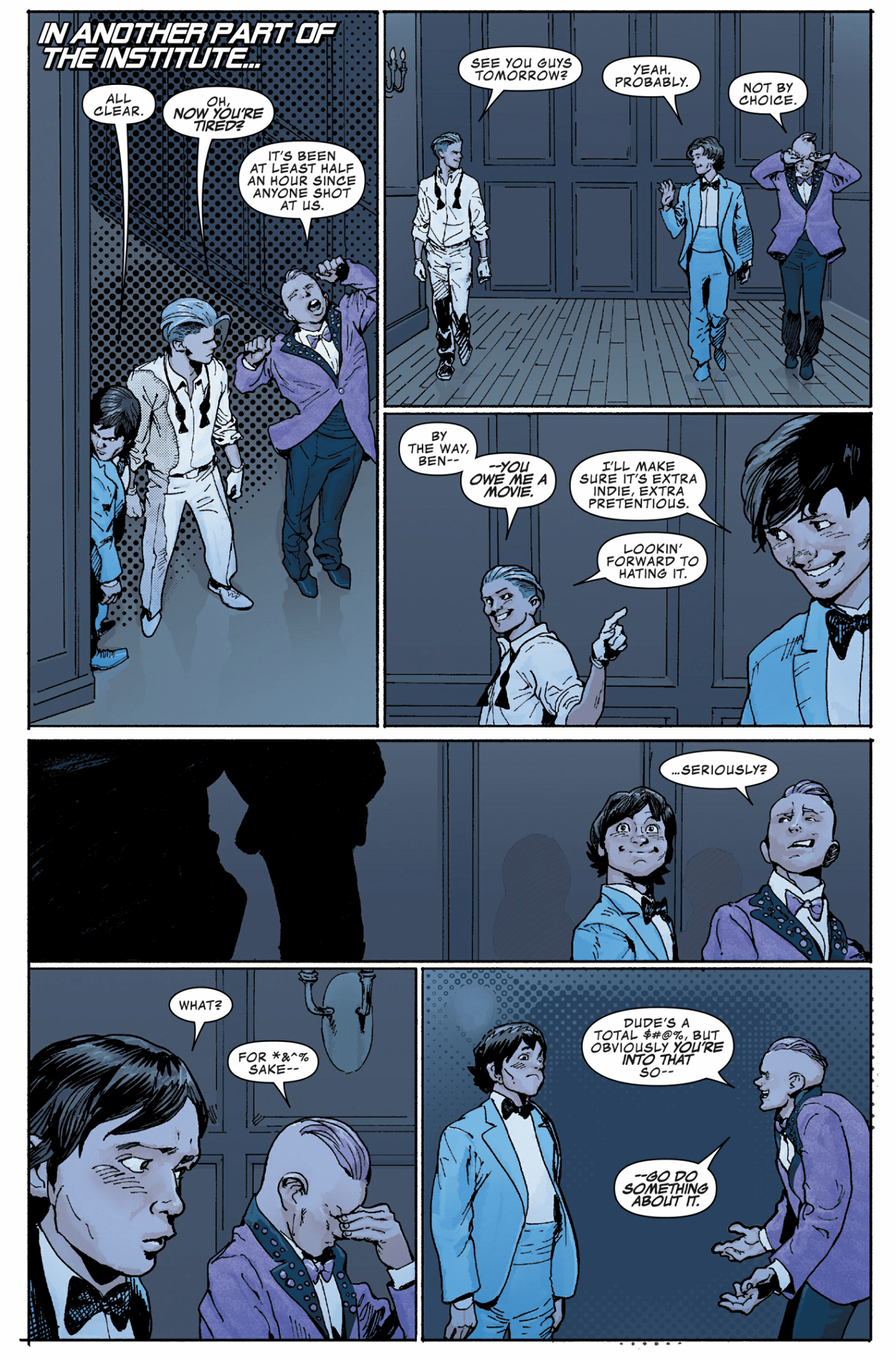 In my opinion, this issue is one of the best in the series. It has everything I was expecting and hoping for since the previous one. The characterization and relationship build up between Morph and Hindsight shine brightly in this story. The book was primarily focusing more on Morph, his insecurities and struggle to prove himself that he is ready to face any obstacles in a world full of “normal” people who fear & hates their kind. To make matters worse is the constant reminder he hears inside his head, the voice of his former mentor, the late Cyclops who is affecting his confidence in using his mutant abilities. I loved how Strain was able to remind us of that time when Cyclops trained & mentored Morph during the Revolutionary (Bendis) era. One of the best parts of the book is when Morph’s insecurities also affected his affection towards his crush, Hindsight. I like it because it is too human enough to feel what he felt, the feeling that we are never ready for anything we think we deserve. A lot of people experience that, and Morph’s over thinking that he is not ready to pursue Hindsight hits hard on most readers. It was also interesting to see Strain teasing a potential pairing between Chamber and Jubilee. What’s good was that it doesn’t feel too forced or too sudden unlike X-Men Gold’s Nightcrawler and Prestige pairing. The two developing potential feelings with each other (mostly Chamber) seemed natural and something sort of interesting. Especially when most original Gen X fans know that Husk, Chamber’s former love-interest, and another Gen X Alumni is coming back in the next coming issues. This opens up a whole new level of drama for the main cast and I’m really excited as to where Christina Strain is taking these characters in the future issues to come.
Pros:

Final Thought: Although it was lighthearted & sort of a feel-good kind of story (compared to other X-books stories), the strong character development and the new potential character pairings kept this issue fresh and exciting. Christina Strain knows how to dig deeper and showcase an obscure character’s strength & weaknesses, making them so relatable that you get to feel like you are now starting to know these characters personally. The book deserves more recognition by using under-developed characters and fleshing them out properly to old and new fans of the series. The book also manages to keep old fans interested by developing new twists to the original cast of the series. As usual, Koda’s wacky art style with Sobreiro’s expressive colors fit perfectly to the story. I know some of you might not agree with how I feel about the art, but for some reason, I think the expressive and fluidity of Koda’s art really set the perfect look for the story. Adding it with Sobreiro’s coloring sets a tone that matches the flow and mood of the book. But then again, art is always subjective.