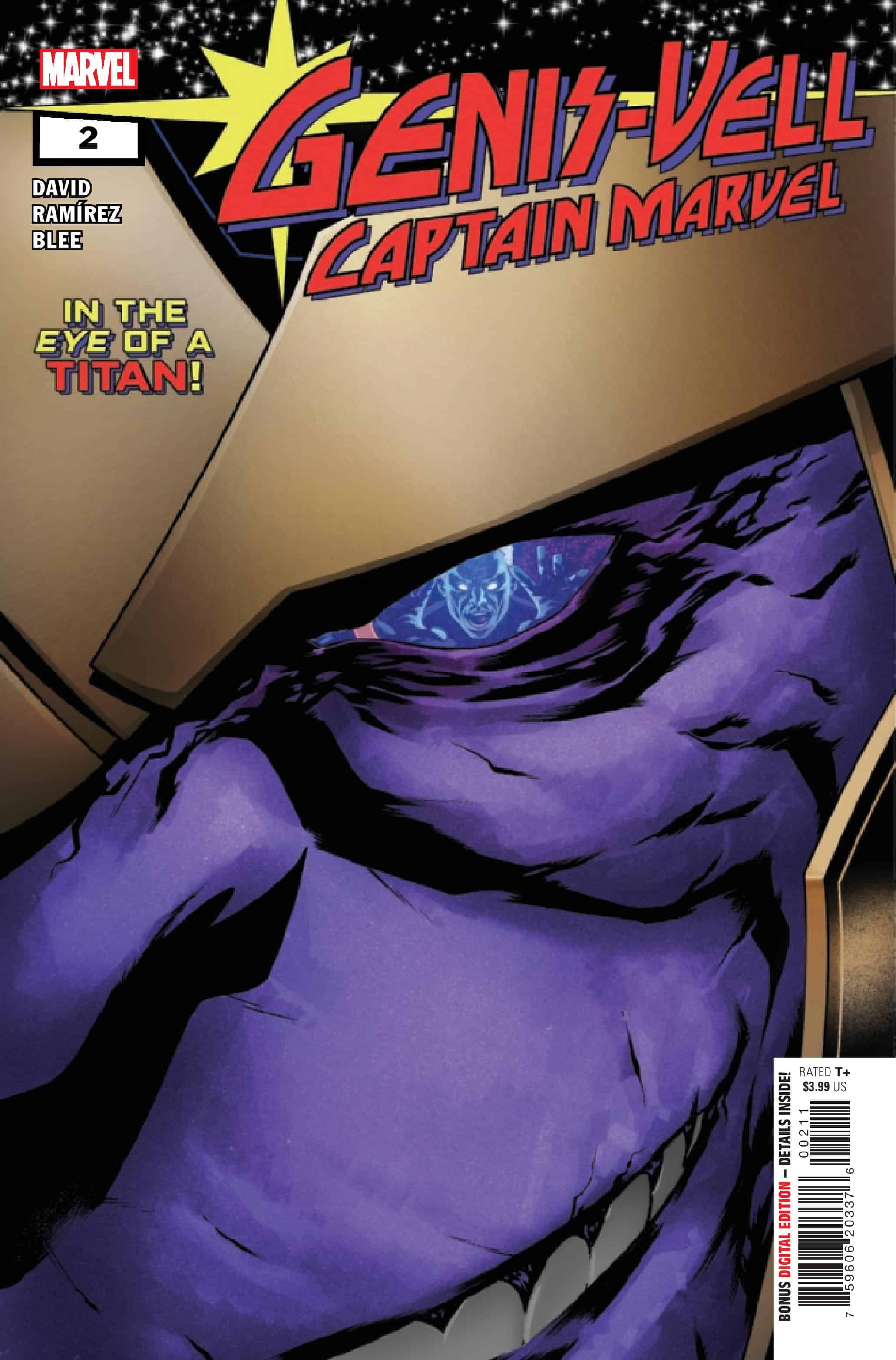 IN THE EYE OF A TITAN! The clock is ticking as Rick must find Genis before they both blink out of existence! Wait…who’s that big face on the cover? Find out who else is searching for Genis and what DEATH has to do with it! 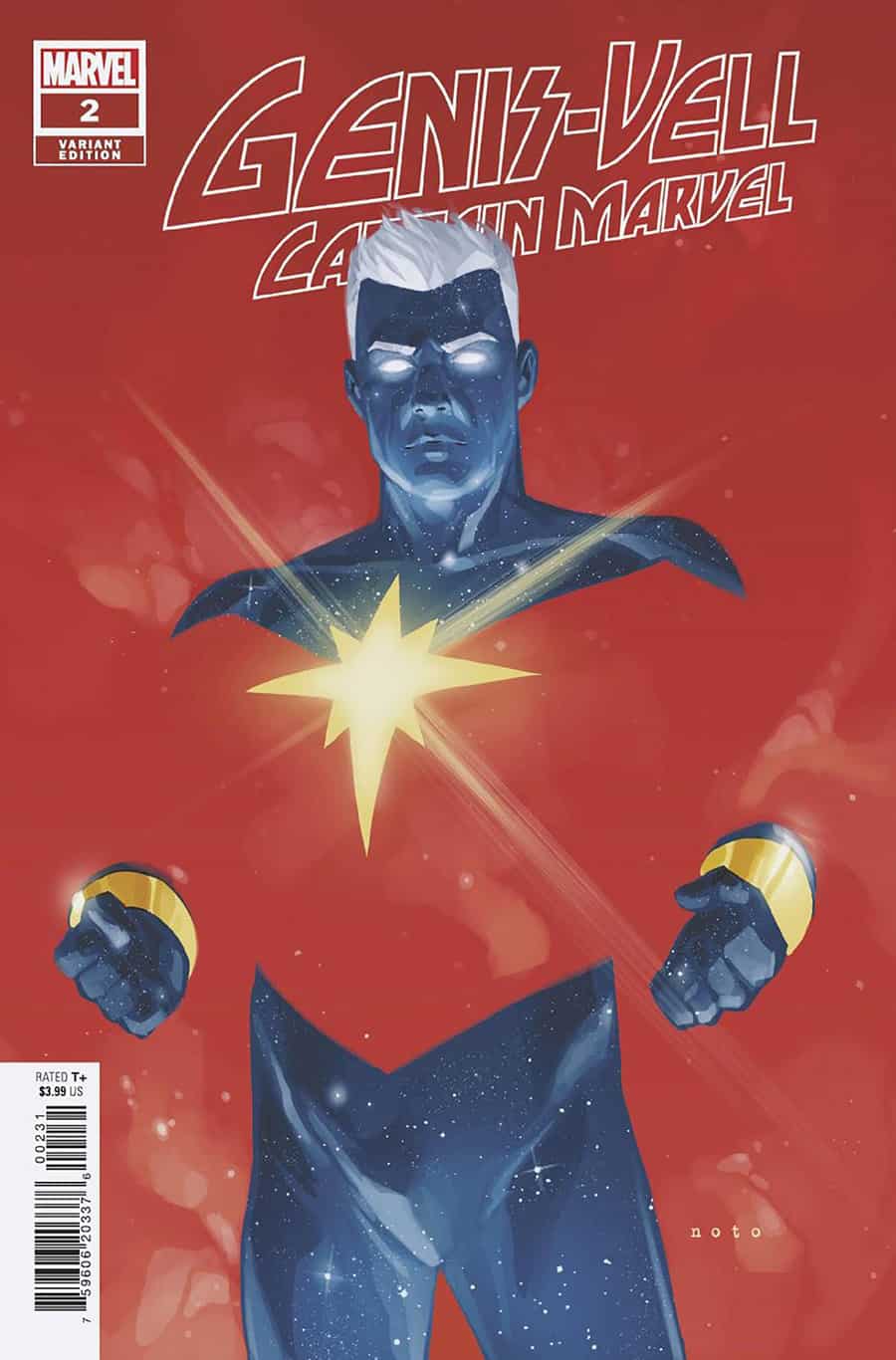 Peter David’s returned to Genis-Vell, and he’s bringing some blasts from the past with him in this issue, and it’s such a fun ride to be on. Not only do we get Genis, but also familiar faces like Moondragon, Marlo Chandler, and Genis’s road dog, Rick Jones! While it’s been years since we’ve seen all of these characters together, yet it feels like they’ve never left. So let’s get onto the review…

As with the last issue, we slip into the untold tales that happened with Genny, and the gang, and it feels both fresh and nostalgic at the same time, which feels like a testament to PAD’s talent. It’s been years since we’ve seen Genis as a part of the Marvel Universe, and after reading these two issues, I can tell what I’ve been missing. The original Avengers Forever by Kurt Busiek and Carlos Pacheco remains as one of the pinnacle of Avengers tales told over the last sixty years (technically fifty-nine. The Avengers turn sixty next year, luvs—also I’ve been watching a lot of British TV tonight, so I might throw in some British slang from time to time). The way these two master craftsmen used their tools that took us through the centuries, and galaxies, giving us one of the most thorough Avengers history lessons, as well as flesh out Kang to become one of the preeminent Avengers villains.

PAD and Ramirez’s story are giving so much energy, and consistent fun, that it makes you want the next issue immediately. They’ve brought back Jazinda for grozit’s sake, with what looks like it’s to be a family reunion between Genny and Phyla from the superhero universe. I’m fully aware that hero v. hero is incredibly tired, and passé, but it’s Peter David, so you know it’s going to be one of the most offbeat, tongue in cheek battles seen in years. It’s so fun seeing a creator who’s willing to not always take things seriously, and just have fun.

PAD’s flowing between the stories set in the past and present could use a tad more finesse, as it still was a tad distracting, but Juanan Ramirez’s work here might be the most effervescent thing about this issue. Everything looked magnificent. From the outer space battles, to the grimy planets, it just felt so in sync with how Marvel should look and feel. Ramirez’s style is reminiscent of another one of my favorite artists, Juan Frigeri, in  that these two feel very complimentary of each other. If he’s giving us this type of energy on a 5 issue mini, imagine what he’ll do on an ongoing title?

Peter David’s return to a fan favorite character that’s become synonymous with his name continues on this soul searching quest to find out why he’s back in the land of the living, and it’s peppered with David’s patented humor and quippy filled dialogue. It’s a very Peter David comic in all of the best ways possible. Meanwhile we have Juanan Ramirez over here putting in the work showing us that he’s primed for the big time.