Genis-Vell: Captain Marvel #3: Knock three times on the ceiling if you want me. Twice on the pipes if the answer is no… 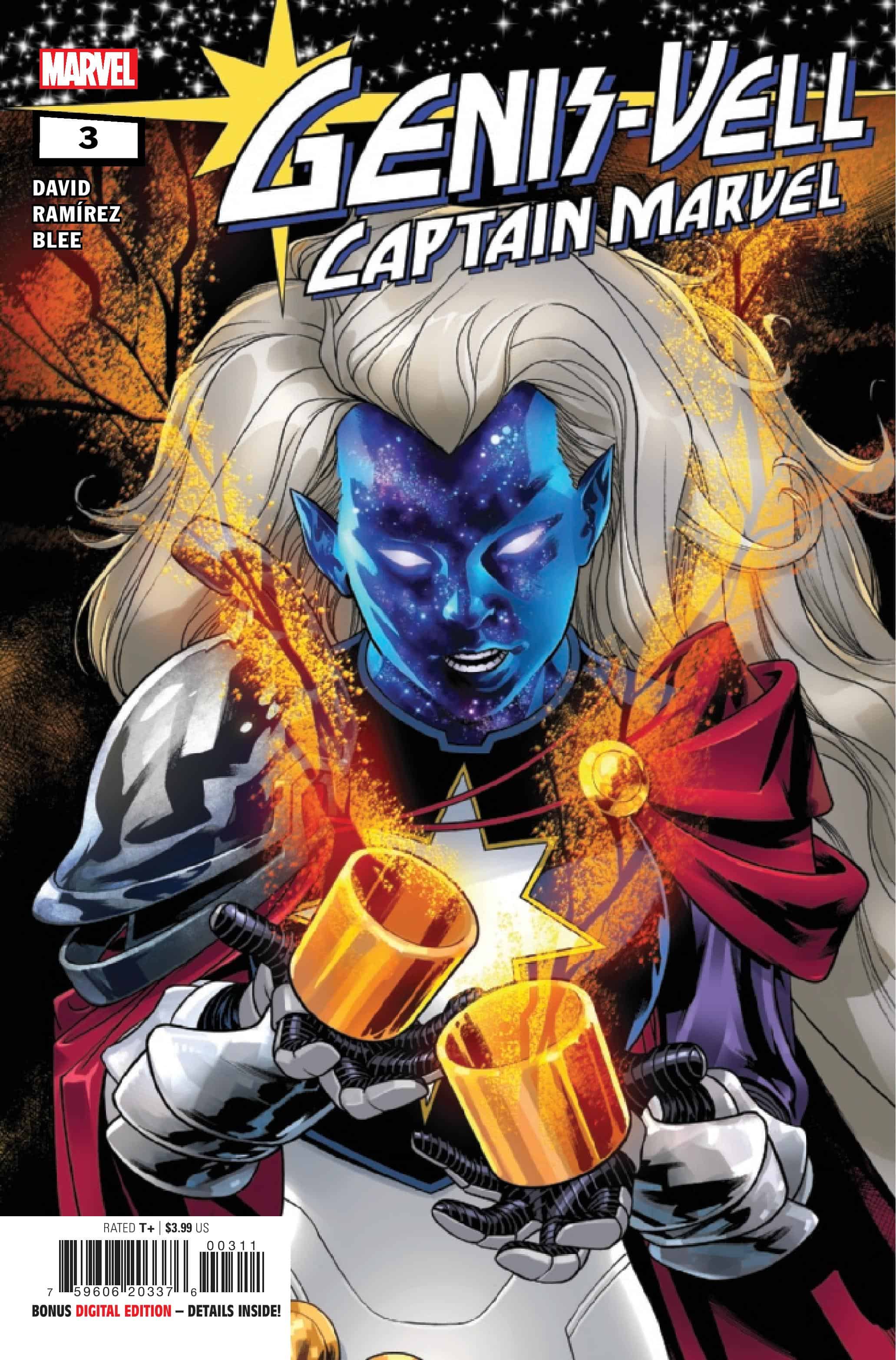 FAMILY MATTERS! Genis-Vell and Rick Jones are a mess when they're apart. Can Phyla-Vell fix this dysfunctional adventure? Or are Rick and Genis' fates already decided?

We’ve reached the halfway point in Genis-Vell’s return, and Peter David and Juanan Ramirez have kicked things into overdrive. Crafting a story that’s both fun and interesting, tying a ton of different storylines together, and building to what will hopefully be a pretty big finale. David’s knack for character development is second to none, and despite all of the trials and tribulations these characters have faced, they feel at home. So let’s get on with this review, shall we?

If you couldn’t tell by the cover, Phyla-Vell joins the cast, and it’s the first time the Phyla from the superhero universe meets the resurrected Jones, and as with any story by Peter David, hilarious hijinks ensues. Phyla find Rick with hopes of getting the Nega Bands to Genis. Unfortunately, ick’s molecular cohesion is quickly deteriorating and is forcing him to have to wear the Nega Bands. Otherwise, he’ll dissipate into nothing, but he’s not the only one. As soon as Rick removes the Nega Bands, Genis’s molecules begin to go nova and threaten to go nuclear. Leaving one to wonder, how’s this going to end? Will these two end up being bonded again?

Meanwhile, in New Hala, Vox Supreme’s former head scientist, Ren-Varr, invites Genis & Jazinda to New Hala, and see the progress that they’ve come along to returning the formerly dead Kree, who died by the Nega Bomb that was set off at the end of Kree/Shiar War, in the now classic Avengers story, Operation: Galactic Storm. Ren-Varr, inspired by Genis’s own…genesis, is using cloning technology to return those fallen by that war, but unlike Genis, the newly cloned Kree aren’t being accelerated but being cloned in real-time. Evidently, Genis’s genes are beginning to lose their molecular cohesion, hence the need for the Nega Bands to keep him alive. It’s a pretty neat twist. During the Kree/Skrull War, it was Mar-Vell’s sacrifice that kept Rick Jones from dying, so I’m assuming we might see the reverse here, with Rick doing the same for Genis.

On top of all that, we’ve got a bigger twist on Genis’s return. You see, they had to get Genis’s molecules from somewhere, but unfortunately, Rick’s were no longer an option since his death, and constant mutation after his turn as Abomination, and the resurrection as a chimera like Abomination during Ewing’s Immortal Hulk run. I’m not going to spoil the surprise, but this is a reason why I’m glad David’s in the driver’s seat. He knows his own continuity, and he’s not afraid to use it. Hopefully, the newer fans who are reading this are interested enough that they look for those older stories. Just some fun stories with characters that have become cornerstones of my fandom.

Juanan Ramirez’s work here is just fantastic. His figure work and style just excel with this type of story. I especially love the way Genis looks here. It’s sleek and stylish, and the characters all look fresh. I especially like his interpretation of Death. She’s just too cha-cha for words. Not only that, but his Genis looks like I’d hope he would. I hope we see Ramirez on something bigger after his turn here because he has all the makings of the next class of Stormbreakers.

As Genis awkwardly stumbles through the story of his resurrection, while those he cares about most are doing everything they can to fix Rick’s and Genis’s molecular problem. Plus—what’s going on with Marlo? What does she have to do with Death? And what is Death’s end goal here? Just more questions that hopefully gets neatly wrapped up over the next two issues.

Genis-Vell: Captain Marvel #3: Knock three times on the ceiling if you want me. Twice on the pipes if the answer is no…