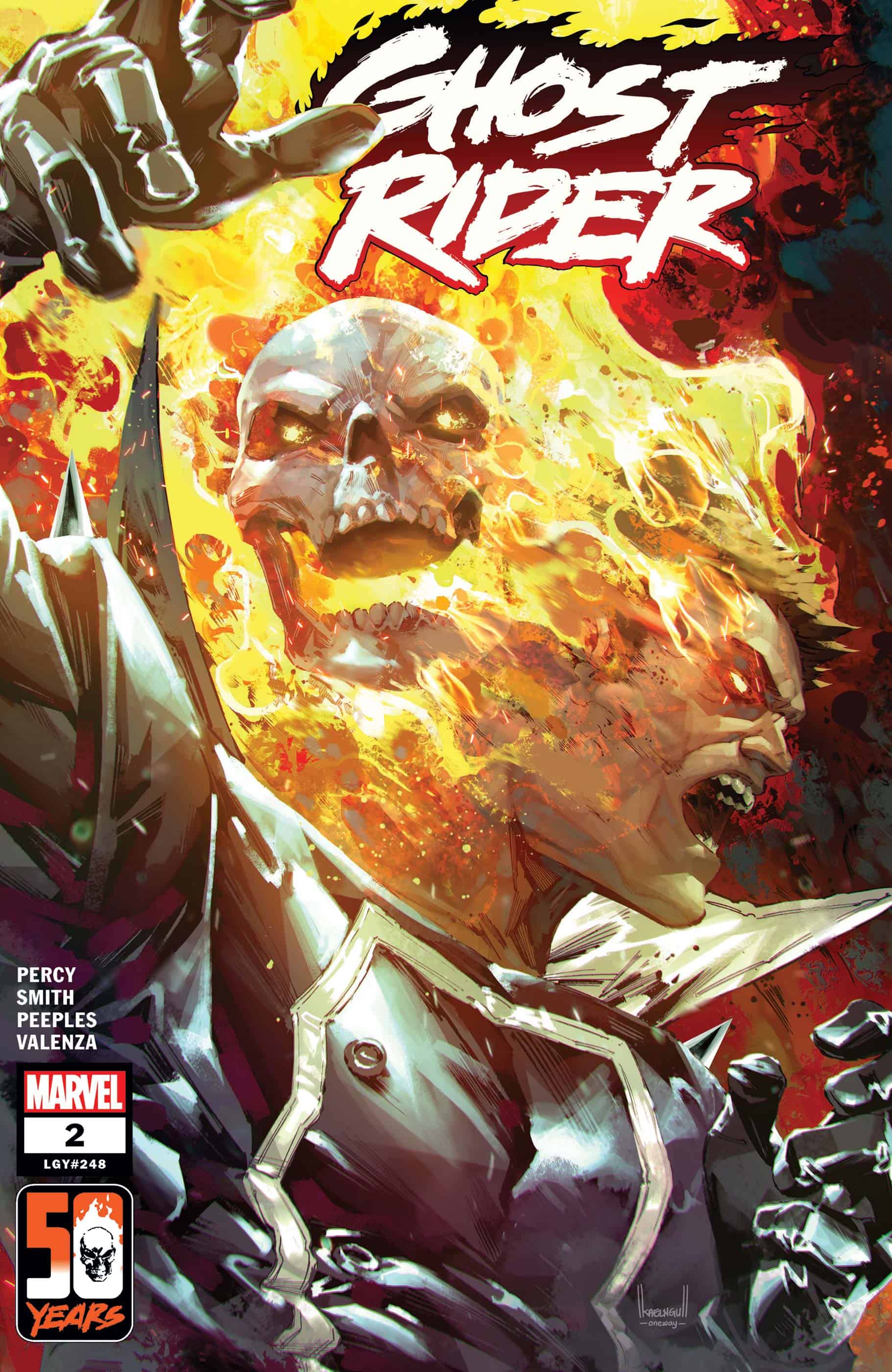 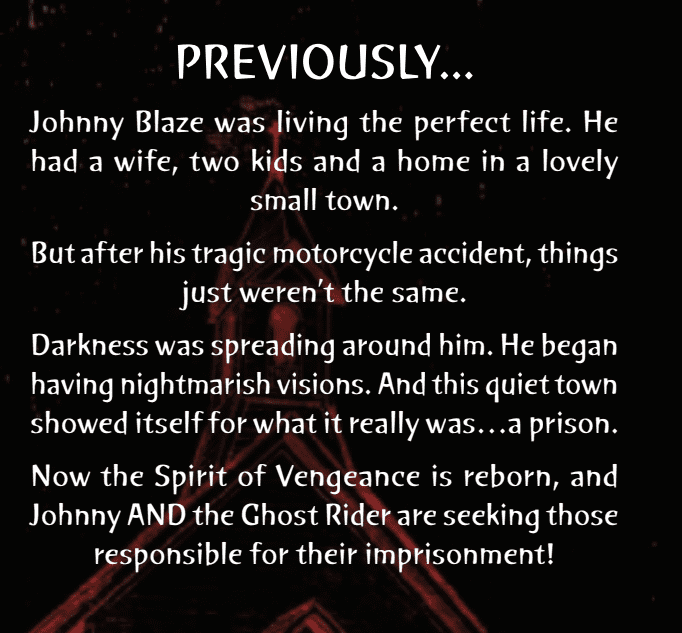 Benjamin Percy is absolutely not f***ing around with this volume of Ghost Rider. Gone are the multiple Spirits of Vengeance, the arcane lore, the convoluted backstory – heck, even the daredevil motorcycling. Stripped away of all that inessential, and the book is left with one thing: a man (Johnny Blaze) with a monster trapped inside him, and the awful, awful horrors that monster must face. Not in the name of justice, but in the name of vengeance. There is evil loose in the world, and the Ghost Rider rides alone against it.

Ghost Rider is a horror comic, through and through. It sits in your cortex and squirms like some viscous little worm in a rotten apple, burrowing within and without, leaving you unable to think of anything else once you’ve finished the latest issue. It’s more than just grotesque (though it’s that too). It’s psychological in its horror as well. Percy understands, fundamentally, that there’s few things more frightening than not remembering what you’ve done, especially when you learn it was something bad. That’s the essence of the Ghost Rider/Johnny Blaze dynamic in a nutshell: there’s a monster inside the man, and although it’s ostensibly a force for good, its sheer brutality is enough to drive even the soberest man to drink.

This issue sees Blaze still trying to piece together who trapped him in his Pleasantville-esque hell last month, hitting the road and getting into demonic shenanigans. He’s also grappling with the fact that he has next to no memory and a gnarly gash on the back of his head that occasionally has an eyeball popping out of it. (The body horror doesn’t stop there; penciller Cory Smith’s skin-melting rendition of Blaze’s supernatural transformation is gripping in its raw gore. No Comics Code Authority here, kids!) He stumbles upon a grotesque human sacrifice scheme at a small-town Idaho motel, and from there, vengeance is served. It’s a relatively one-and-done story, albeit one that’s part of Johnny’s overarching journey to find out who trapped him and the Ghost Rider in their own personal Hell. The best thing about Percy’s GR run so far, aside from the pitch-perfect execution, is that it’s completely new-reader friendly, and the second installment is no different.

Cory Smith’s art is a little workmanlike outside of the more horror-inflected moments, though. He gets the job done, but doesn’t quite shine until it’s time for the gruesome big guns to come through. But shine he does at those junctures: 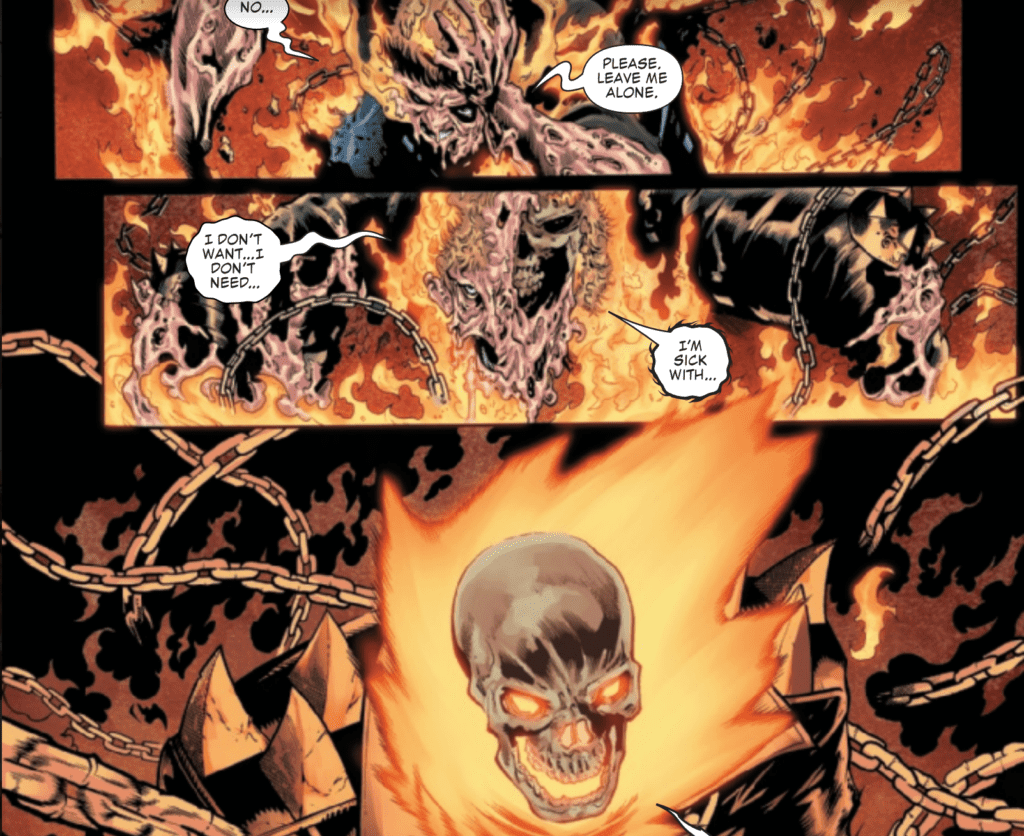 No Ghost Rider transformation has been this metal since the glory days of Mark Texeira!

Given how well Smith shines at the book’s more horrific aspects, it’s worth suspecting that he might be downplaying the more mundane elements of the story in order to more properly accentuate the supernatural. Brent Peeples pitches in on a few pages for pencils as well as art, though the credits don’t tell which pages are his, and the art flow is so seamless that it’s impossible to tell when the switch occurs. So, that means there’s a chance I’m lavishing praise on the wrong artist here – apologies to both Mr. Smith and Mr. Peeples if I got your work reversed! The inkers in question for the comic, Roberto Poggi and Oren Junior (along with the aforementioned Peeples, presumably inking his own pencils) do a stellar job of making the art consistent and flow seamlessly; that said, it would do Marvel wonders in the future if they would ensure that when multiple artists work on a single book, their individual pages are properly credited. It’s otherwise a disservice to them all and at least tacitly communicates that they are interchangeable, which isn’t fair to any artist involved.

Hail Beelzebub! Benjamin Percy's Ghost Rider #2 is a fiendishly good read, perfect for new readers and old alike. Throw your horns up and get in on the horror show NOW!