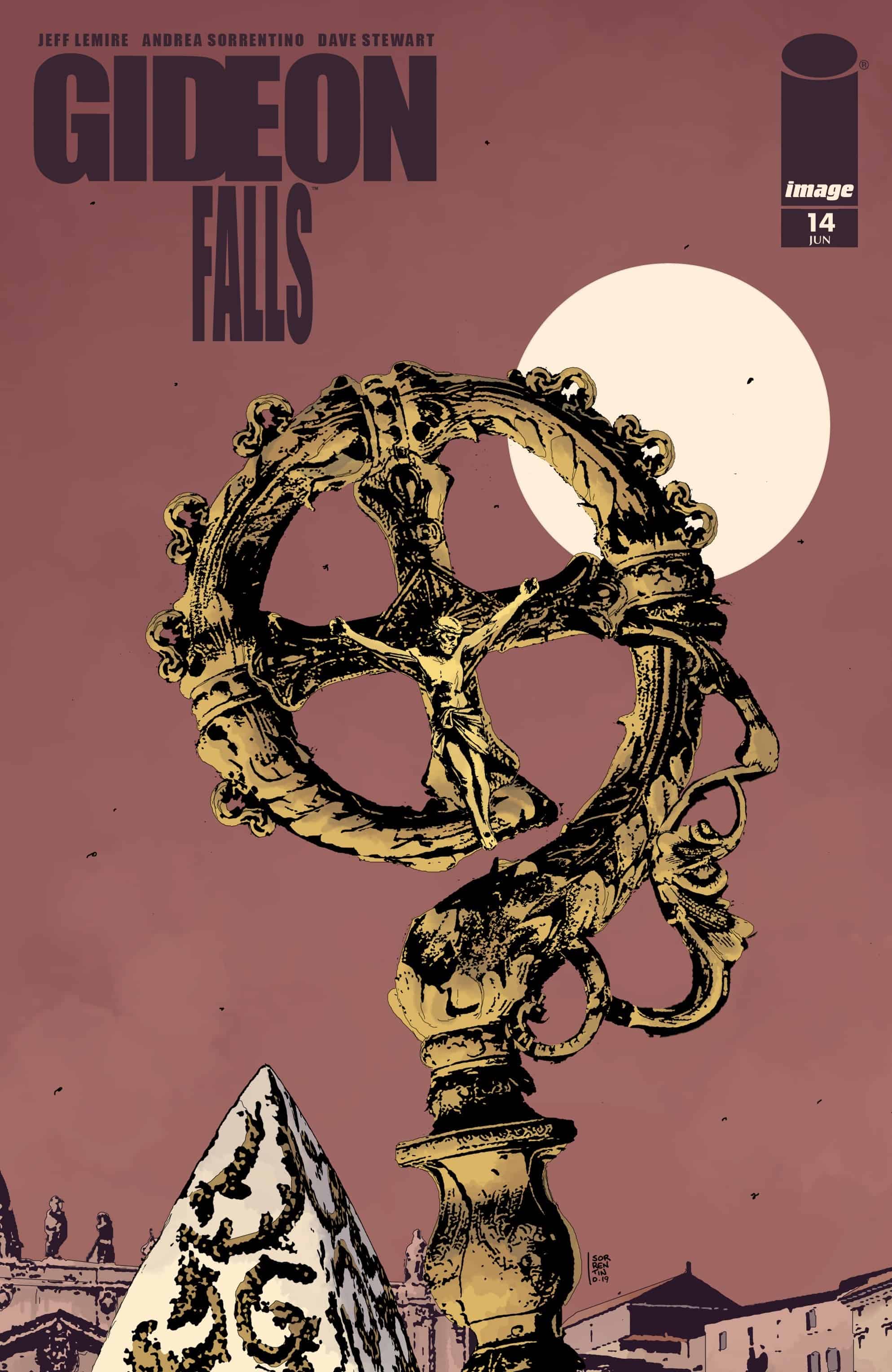 Last time we followed early twentieth century Gideon Falls priest Father Burke as he chased after an alternate (or is it future?), homicidal version of Norton Sinclair across a Gideon Falls multiverse. Burke stumbled his way through a disorienting barrage of alternate Gideon Falls each one dystopian than the last. After a chilling and ominous chat with Sinclair that left Burke stranded in an unknown, lush setting, he happened upon a village of people apparently expecting his arrival and all wearing a very familiar face mask…. 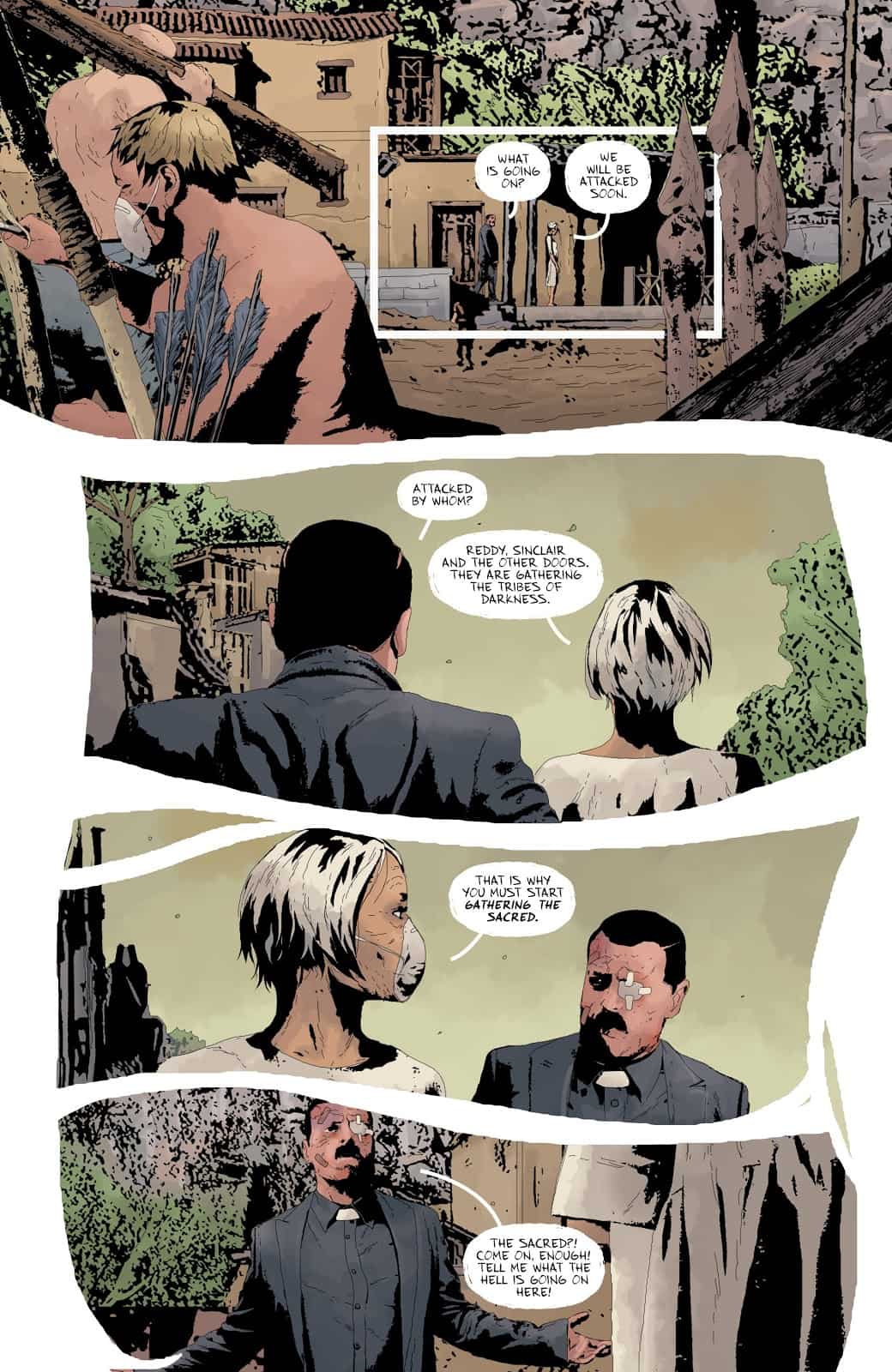 Look, I’ll be the first to admit that as much as I adore this series, sometimes I get lost in Andrea Sorrentino’s gorgeous, trippy artwork and I lose track of the actual plot of the series. It was issues like this one that reminded me of the very big, very complex plot going on underneath all that mind bending art.

After that chilling dialogue between Burke and Sinclair last issue, issue #14 feels more like a breather to get some important plot information out of the way…even if it’s in-universe near indecipherable.

Continuing from last issue’s cliff hanger, here we learn that there is a group of people known as “The Village Near the Centre,” named because apparently this alternate earth Gideon Falls is located closest to the center of the multiverse. Interestingly enough, they all seem to be led by an older, up to speed version of the younger, non-demonic Sinclair’s therapist.

According to denizens of the Village, Burke will go on to become “The Bishop” a leader figure for the Village who will gather and send forth five prophesied individuals, the Madman, the Soldier, the Sinner, the Doctor and the Father. No doubt we’ve either met some of these people already or we can look forward to meeting them in the next few issues. Slowly all the pieces seem to be moving in place for some ultimate stand against the Black Barn and a mysterious event known as Postculus. 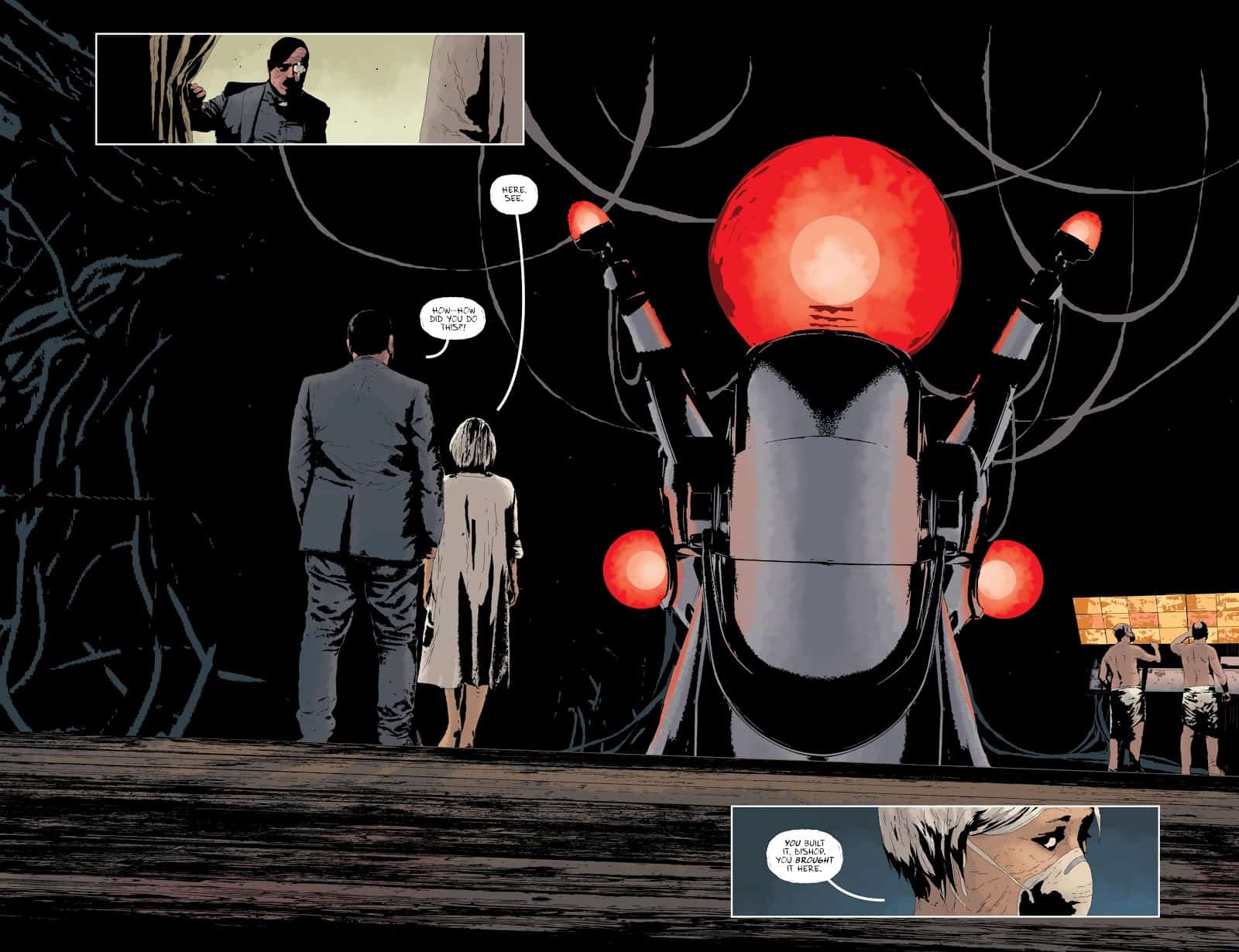 Postculus, a multiverse centered around Gideon Falls, the nature of the Black Barn, evil Sinclair, there is so much going on in this series it can be a little daunting trying to comprehend what is actually happening. Luckily, Lemire anticipates uncultured swines such as myself and assures us through his characters that everything will eventually make sense.

As with many times in the series’ past the multi page spreads by Sorrentino alone elevate this comic to another level. The transition scene where Burke leaves the Village and returns to the “Main?” Gideon Falls several decades after having left did a superb job capturing the disconcerting even painful transport felt by Burke.

Black and white images of Gideon Falls appear to be crumbled like paper and billowing into his eyes. You can practically hear the sound of the paper crumpling, drowning out Burke’s screams. 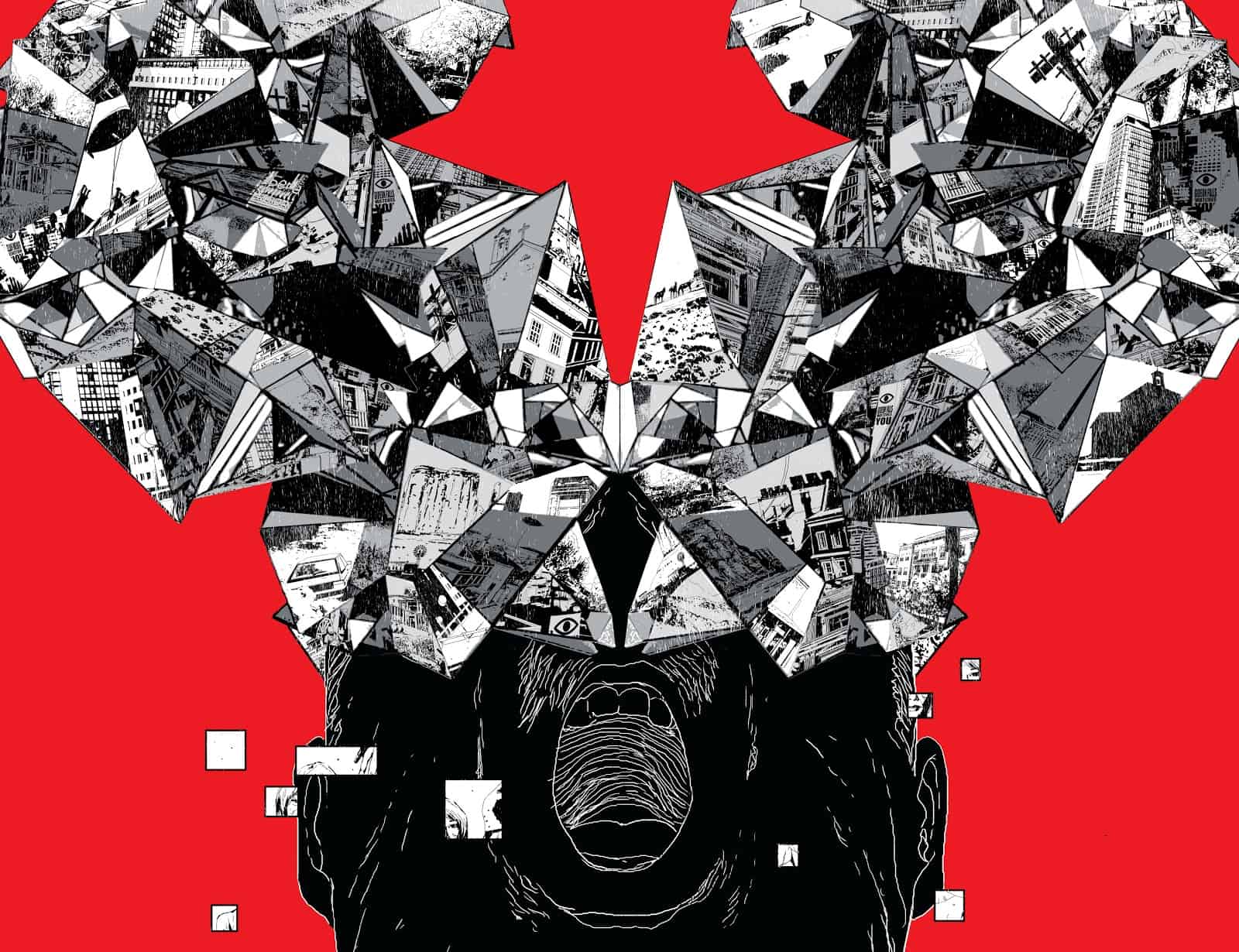 The rest of the issue shows Burke frantically start his mission while also getting used to being, from his perspective, several decades into the future, Gideon Falls, 1953 to be exact. The final pages show an older Burke, years later having ascended to the rank of Bishop as foretold. The final page shows that he appears to have already assembled a prototype version of his flock from the Village at the Centre. His flock’s current mission? Prevent the return of the Black Barn by finding Father Fred.

This issue was mostly an info dump so it wasn’t exactly the most exciting chapter of Gideon Falls. Its easy to share in Burke’s frustration in regards to his ignorance of anything going on. As the older version of Sinclair's therapist tells Burke not to worry and just go along with events, I can't help but feel the obvious metaphor for the series and Lemire by extension telling the reader not to worry too much about understanding the plot and just sit back and enjoy the trip to the Black Barn.

Not the most thrilling issue of Lemire’s incredible series but a mediocre issue of Gideon Falls is still an excellent comic by normal comic standards.