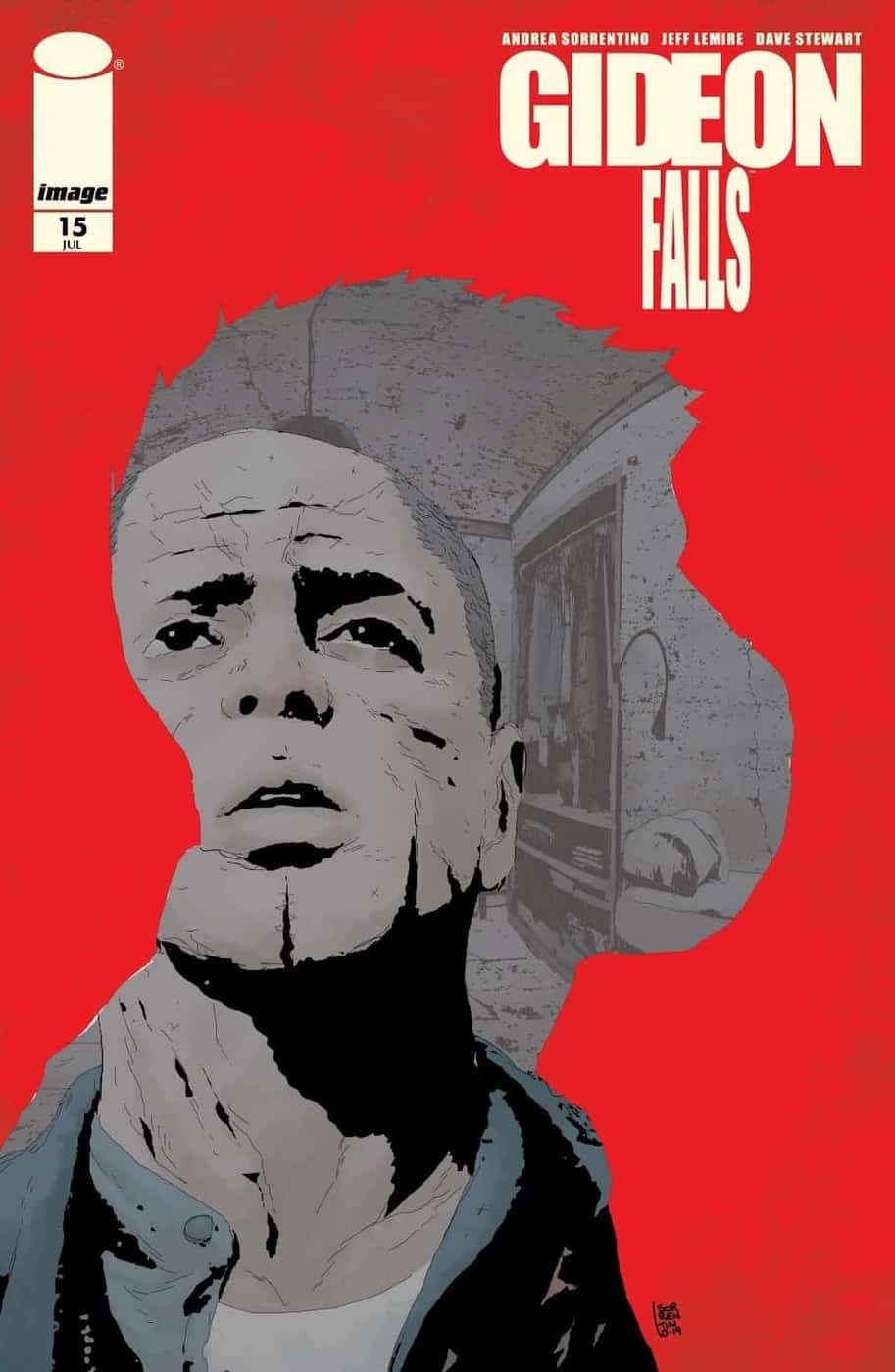 Previously on our mind bending journey, Bishop Burke met up with The Village Near the Centre, a group of individuals whose ranks include an older version of Norton Sinclair’s therapist, Dr. Xu. Xu tells Burke that he is destined to become The Bishop who will lead them as well as the one who will assemble five important individuals for some kind of event known as Pentoculus. After being transported to the year 1954, the issue flash forwards years later to where Burke has ascended the ordained ranks to of Bishop and has already assembled a prototype version of the Village with their current mission being to locate the missing Father Fred.

First off let me just give a hearty congratulations to Jeff Lemire, Andrea Sorrentino and the entire Gideon Galls creative team for their recent Eisner Award win for “Best New Series!” It was certainly well deserved and hopefully increases the public recognition of this terrific series.

Getting back to the review, hoo boy now we’re talking. After last issue spent setting up Bishop Burke and the road ahead issue 15 of Gideon Falls delivered some sweet character development,

Alas all is not well. It seems as though one our protagonists Father Fred has amnesia! That’s never good. In his state he’s unable to provide any useful information to Dr. Xu and he stumbles away into this unfamiliar version of Gideon Falls. 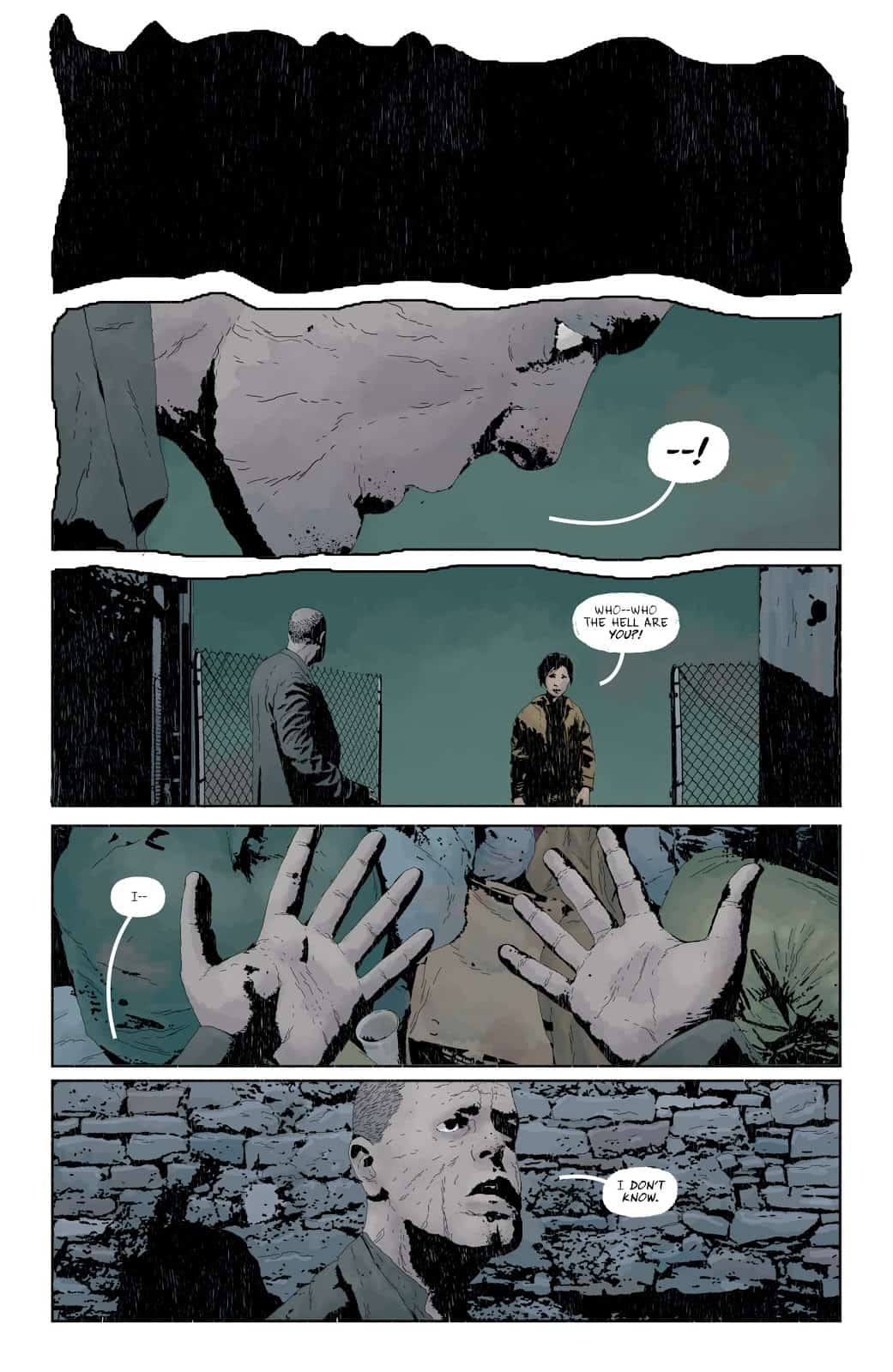 I really enjoyed the silent panels of Dr. Xu, searching for him in his room of seemingly insane conspiracy theories regarding the Black Barn. What I liked even more was the splash page of the therapist putting on Norton’s face mask as the looming terrifying image of the evil, homicidal Norton Sinclair from the 1800’s leers behind her. 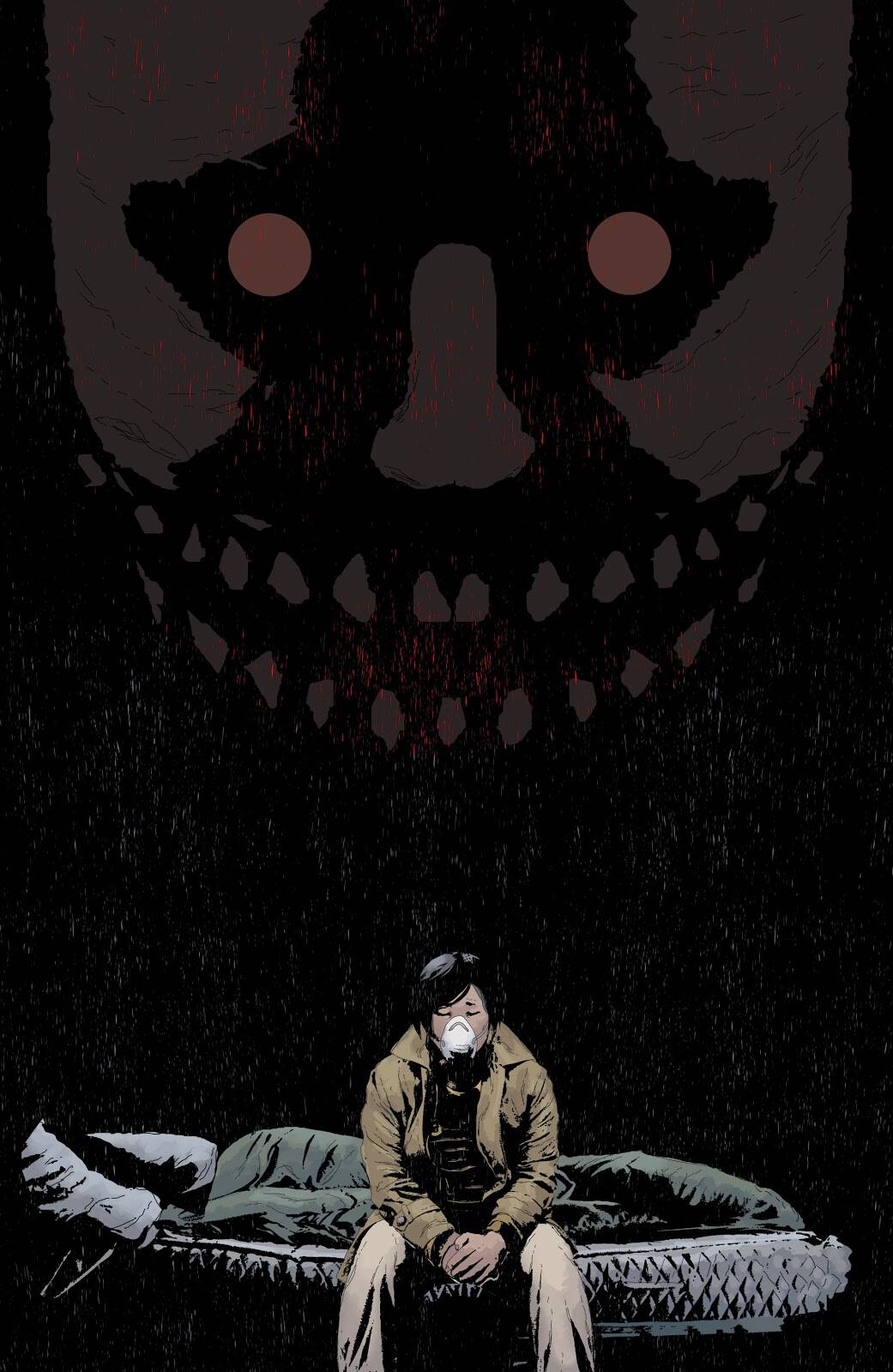 After receiving a call from her secretary asking where she’s been, Dr. Xu hangs up on her, tosses away her phone and apparently abandons her profession to pursue her missing patient Norton full time. It seems that Dr. Xu is on her way towards becoming the older, knowledgable version of herself glimpsed at in the previous issue. Another example of the character’s development in this issue that just shows how everyone is evolving from who they were at the beginning of the series.

Even more intriguing is that she also appears to emulate Norton’s behavior from an art style perspective. As Sorrentino depicts her on pages with nothing but red circles and arrows to draw the readers attention much like he did with Norton at the beginning of the series. 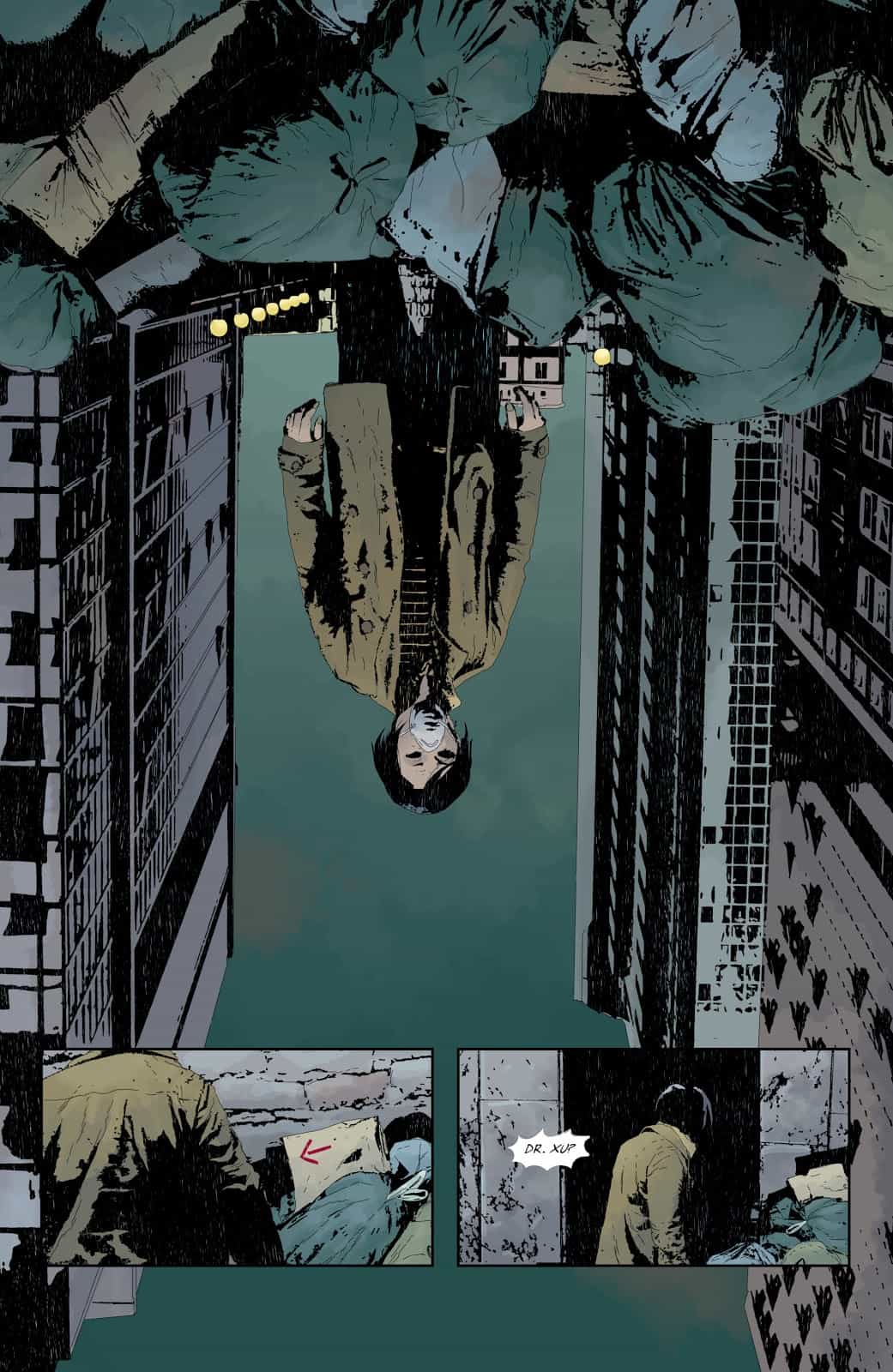 Looks like amnesia isn’t the best medicine for a recovering alcoholic as it seems as though Father Fred got pretty hammered from the bottle offered by that homeless man.

As if Fred wasn’t already disoriented enough, he soon learns that he is being followed by members of Bishop Burke’s flock. Unfortunately for them, the sauced up and terrified Fred isn’t about to go anywhere with these priests.

Instead of safety, Fred winds up beneath a horrific image of a woman from his past named Rebecca. Only instead of the face he remembers, Fred is treated to the infamous Glasgow grin of the older Norton Sinclair. 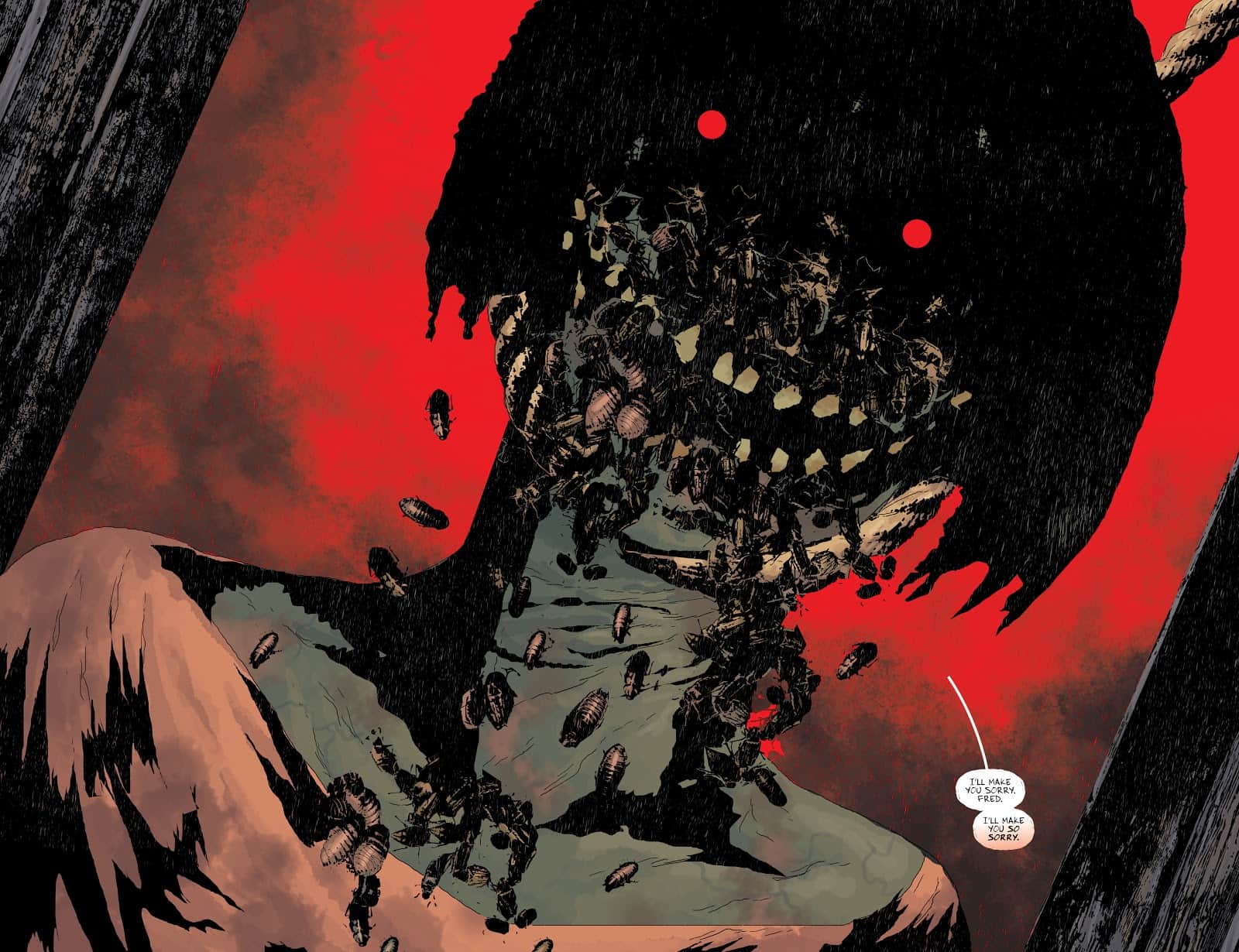 Good grief I thought that earlier image of the evil Sinclair behind Xu was scary but that has nothing on the double page spread of Evil Norton’s demonic grinning face appearing on the hanging body of someone from Father Fred’s mysterious past.

As usual, Sorrentino’s art is top notch and only elevates quality when utilized for nightmarish imagery like the grinning horror above.

I’m happy to see it looks like Xu and Fred will be working together to uncover the horrifying secrets of the Black Barn. Too bad for them it looks like the road ahead is going to be paved with unspeakable horrors from beyond reality. 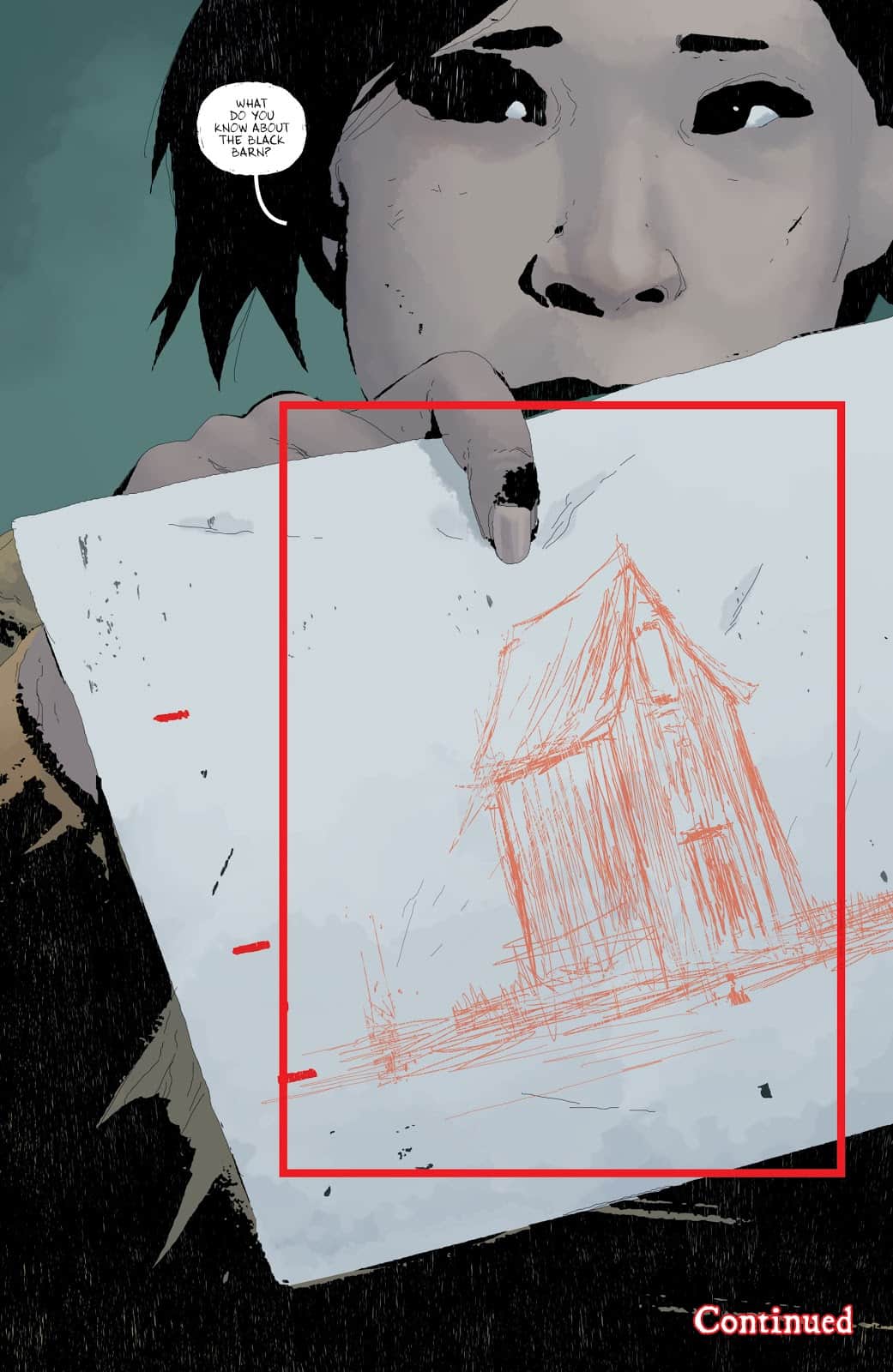 I was so caught up in Father Fred’s cryptic flashback and the nightmare face of Sinclair that it wasn’t until the preview cover for the next issue that I remembered that Father Fred and the younger Norton Sinclair have swapped places in the Gideon Falls multiverse. Hopefully Sinclair has a better time adjusting to the rural farm town Gideon Falls that Fred came from than Fred did when he ended up in grungy city Gideon Falls.

Like I said in my previous review, the comic does not hold your hand in explaining what is going on and it often takes a couple of re-reads to fully comprehend what exactly the plot is. Maybe I’m just dense but I still appreciate the intricate plot and how the comic continues to challenges the reader.

Another chilling and excellent issue. Its clear to see why Gideon Falls won its Eisner as it provides gorgeous art and thought provoking plot developments every month. If you haven’t gotten around to picking up this series I highly recommend going out and checking out the first trade paperback. Cheers to more issues of following our cast through terrifying trips through the Gideon Falls multiverse.