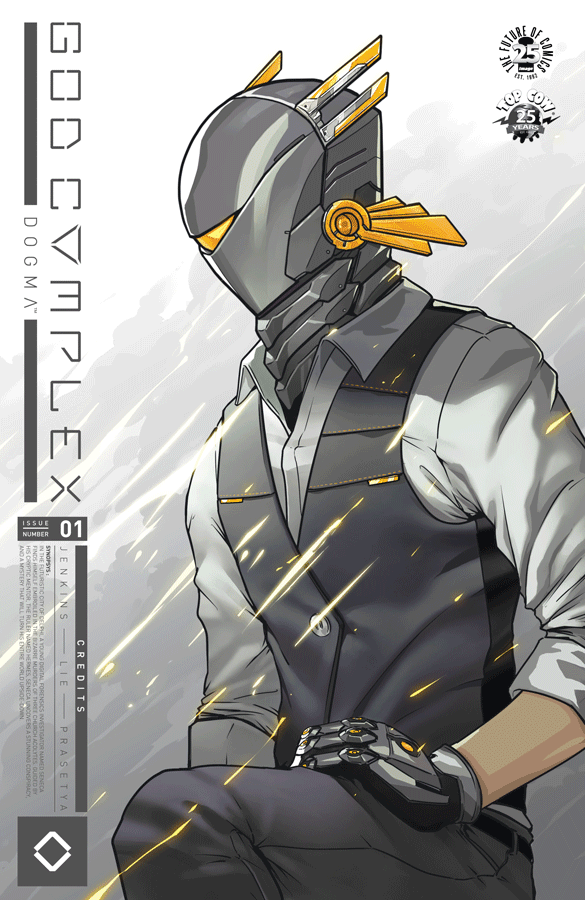 Based in the futuristic dark and dismal metropolis of Delphi, Seneca, a detective-forensic investigator catches a case involving three grisly murder victims whose identities are unknown and have left no forensic data footprint, which points to them being acolytes of Trinity Church, anti-tech fanatics.  Subconsciously though, Seneca senses that something is very wrong, with these murders, with this miserable world he exists in, and most of all, with himself.  Seneca reports directly to the mysterious Hermes, a Ruler, one of the elite in this futuristic pulp-like sci-fi drama.  Rulers have the ability to navigate the stream, a realm that runs parallel to the grim imagery of Seneca’s Delphi, and access to this stream allows the Rulers to ‘navigate the currents of all human knowledge; like Gods’.  Through forensic data investigation and the assistance of Hermes, Seneca uncovers a conspiracy, connecting the murders to the Trinity church and must determine why.  All the while, his paranoia and constant questioning of his own existence and the existence of the one percent, the Rulers, whose abilities make them gods leads to revelations that may very well capsize his entire world.


After a 7 issue run in 2009-2010, Image Comics has returned with God Complex Dogma Vol. 2.  The initial God Complex run (God Complex #1-7) focused on Paul, he was just your typical average Joe, maybe a little stronger, a bit taller, but average none the less.  Here it comes; Paul was average, except for the fact that his mortality and his family ties were quite unnatural; Paul was immortal and in hiding from his family.  Paul was actually the Greek god, Apollo, hiding from a plethora of Greek gods, members of his mythological God family, but primarily his father, Zeus.   Zeus, most powerful of the pantheon of gods had decided that if Paul would not embrace his birthright as a God, he preferred Apollo dead rather than living a life amongst humans as an average person.  Suffice to say, life for Paul as a God attempting to remain hidden from this family of his, Gods as they were, became increasingly dangerous and referring to Paul’s situation as complex would be an understatement.  Whether Vol. 1 and Vol. 2 will tie together and how is a good question. It is my understanding that some of these ‘God’ characters have appeared in other titles by Image Comics over the years so it will be interesting to see where writer Paul Jenkins (Inhumans, Wolverine: Origins) takes us; expect things to get interesting.

In this grim futuristic city of Delphi, Seneca is hopelessly attempting to find a data footprint amongst a bizarre crime scene where the bodies of three murder victims, whose tongues have been removed and the scene seems to have been staged.  Fellow Detective, Rodgers, seems uninterested as it is apparent these three are most likely acolytes of the Church of the Trinity, anti-tech fanatics in a world where data and tech seem to be worshiped in their own right.  But Seneca, from the start, seems to question everything, even his very existence, and the absence of evidence combined with the staging of the scene leads him to seek out his mentor, Hermes, a Ruler, with God-like powers and before Seneca can suggest the entire scene is a diversion, Hermes does, as if he knew what Seneca was thinking all along. 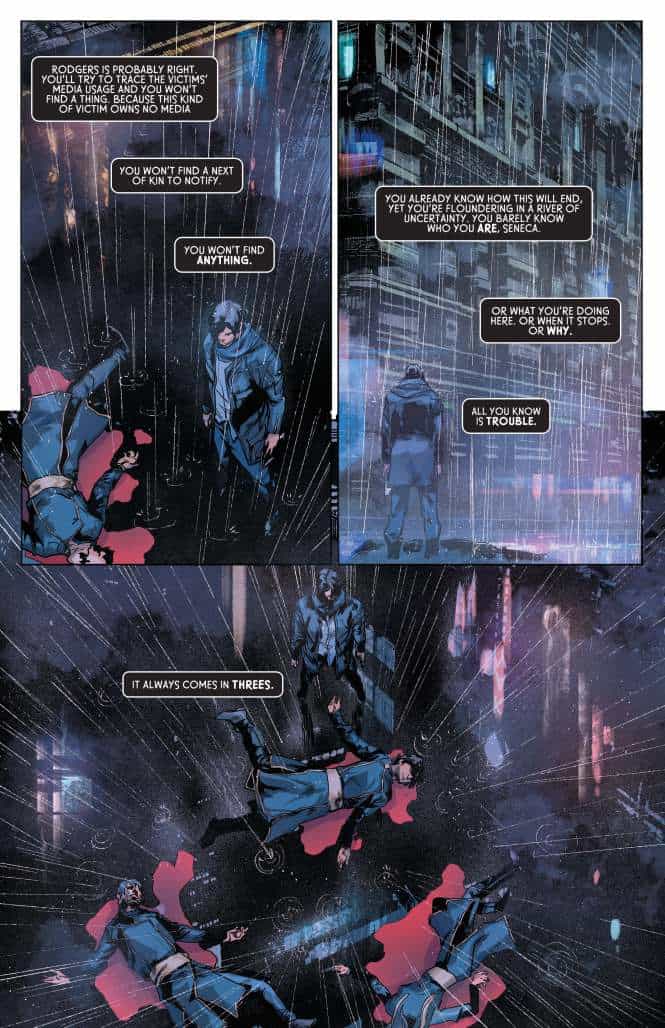 This is our first introduction to the ‘stream’ and Seneca’s first time actually seeing it as well, as Hermes receives a security alert, and produces a visual representation of the stream location where a security breach is taking place and proceeds to quarantine these sections.  Hermes does all this with ease, informing Seneca that he was right, this was a diversion to give someone an opportunity to penetrate their security protocols, he then isolates the protocols being hacked, requests Seneca’s presence at the Substrata and vanishes in a brilliant flash of gold lightning.  Seneca then seems dumbfounded by what he has witnessed and how Hermes knew exactly what he was thinking.  Argus Heights, home of the Substrata, a technologically advanced nerve center, where once again, Hermes accesses the stream, explaining this is what separates the Rulers from humans, their ability to ‘Navigate the currents of all human knowledge, imagination, and information’.
Hermes take Seneca into the stream, where Seneca is amazed at what he is being allowed to see, and Hermes explains there is a virus in system, destroying their security walls and rebuilding these walls with themselves as a form of camouflaging itself, and they have the marking of a three-pointed deltoid, a triangle, obviously the work of the Church of the Trinity.  After making this clear, Hermes moves as ‘a ghost in the machine’, flushing out the infiltrators and wiping them out with barely a wave of his hands. 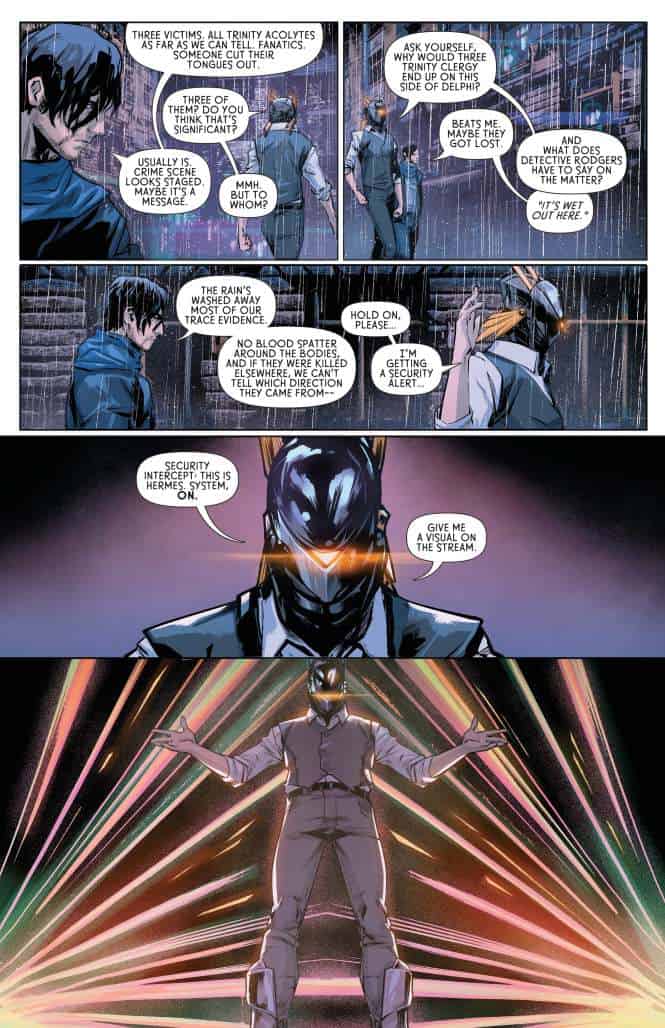 Seneca pays a visit to a local Trinity Church, where we later learn he was raised, and thru the loss of his mother to an illness, her death became the catalyst behind the abandonment of his faith.  He now is searching for purpose in a world that doesn’t seem real to him.  He questions his own existence, who he is, why is he here, and now after seeing the ‘stream’; he realizes the rulers ‘ride the stream-the totality of human ingenuity and imagination.  They control what you see and hear-like Gods’, leaving him even more lost.
Seneca begins to connect the dots and with the help of Detective Rodgers, arriving  at the conclusion that the Church of the Trinity is involved in a much larger conspiracy, the deep data walls protecting the servers inside Argus Heights were purchased from a trusted source, Deltoid Labs, which they now have discovered was owned by the church.  Deltoid Labs was broken down and sold off to suppliers who also sold data to everyone and these suppliers, they were covers, actually owned and run by the tech-shy members of the Church of the Trinity as well.  So the conspiracy grows to vast proportions as it unfolds, and is much bigger than a triple murder or a simple data breach.   Why is a church of anti-tech fanatics involved in all these data transactions and what else are they hiding?
Conversations between Rodgers and Seneca offer some insight as to what is really known of these Rulers, the elite, the one percent as they are called. The Rulers are considered never to have been incorrect, they have no need for food or rest and it is even suggested they have no faces beneath their masks.  This seems to be offered as speculation and as these revelations are made, Hermes makes an appearance and says there is something he and Seneca must discuss.  Hermes proceeds to question Seneca on his thoughts regarding the stream and informs him it’s not virtual reality but a very real place.  Hermes expresses an interest in Seneca, sensing a potential, but states that obstacles stand in the way. The conversation becomes quite existential as Hermes addresses Seneca’s subconscious thoughts, feelings of being lost, voices, a paranoia of something being very wrong with the world and then Hermes throws Seneca’s world into a tailspin alluding to Seneca that he is somehow different from the rest and that all of his thoughts he has regarding his existence, reality, the elite, are true and that Seneca is right!  As Seneca tries to process this shocking revelation, unsure of its full meaning, Hermes introduces Seneca to Apollo, another Ruler.

I had to ask myself the same thing.  As I didn’t read any of the previous books with these mythological Greek Gods, and it seems there have been a few, these characters are new to me and come across very real, and leave me intrigued and wanting more.  Jenkins did an absolutely stunning job with the story, leaving room for lots of unanswered questions to be addressed while offering up more than enough conspiracy and intrigue to keep me on board.  The whole premise of Delphi, the dark gritty imagery, and these Rulers who basically control and have access to everything, all knowledge, thru the mysterious stream, made me feel like someone had put The Matrix, Minority Report, American Gods and Bladerunner into a blender on high speed!

Jenkins’ storytelling mixed with Prasetya’s artistic style is an incredible combo.  When Seneca is first introduced, the young forensic data investigator’s attempting to solve a triple murder of three apparent nobodies involving a powerful entity known as the Church of the Trinity, and we see how Seneca questions everything!   From the very beginning, ‘Who am I?’”, ‘Why am I here?’, and following Seneca throughout the story, a subconscious voice he hears, seems to foreshadow what is to come, and  the foreshadowing was extremely well played and it helped the story move along in a very linear manner.  To be able to introduce this futuristic sci-fi world, dependent on tech, the Rulers, their ability to manipulate the stream, and create this feeling of paranoia that kept the pages turning took great skill, and I think it was the combo of writer, artist, and character material that allowed them to pull this off with such grace and beauty.

We find out that Seneca is onto something in more ways than one, yet he is plagued with further questions.  Also in a world ruled by omnipotent elite, the one percent, how could this Church of the Trinity have pulled this conspiracy off, selling data packages used to build the security protocols that those in control use to stay in control, and another interesting question, is why and how a large fanatical anti-tech group even has the ability to pull off such a monumental feat of deviance and subterfuge without being detected. Talk about complex, these guys did everything right. Look at the scenes with normal humans where they look beaten down, just the right amount of grit; contrasted with the scenes with Hermes, the all knowing, all powerful; were done incredibly  well, and with so much finesse, as he was always shining, the flashes of gold lightning and the much lighter colors played well into his character’s development.   And for an elite, a one per-center, Hermes didn’t come across as smug or better than; he was just a different animal with a different set of rules to play by and a much more awesome toolbox at his disposal.
We know the Trinity Church fanatics are up to something big and have been for some time, and we know that Seneca has also got something to do with all this, as Hermes says, he ‘ see’s potential in the young man, but there are obstacles.’, and my guess is one of these obstacles is the menacing and at the same time, powerful presence that pours off of Apollo in his introduction on the final page. Extremely complex and leaves the reader wanting more, at least this reader definitely wants to know the rest of the story.

Final Thought: God Complex Dogma took me by surprise, reminding me of an old school pulp detective story based in a futuristic tech-based society run by mythological Gods.  I think Image Comics has a winner here and we can expect incredible things from the team behind God Complex Dogma! In my opinion, It’s so good, it may leave you questioning your own existence; “Who am I?”, “Why am I here?”!