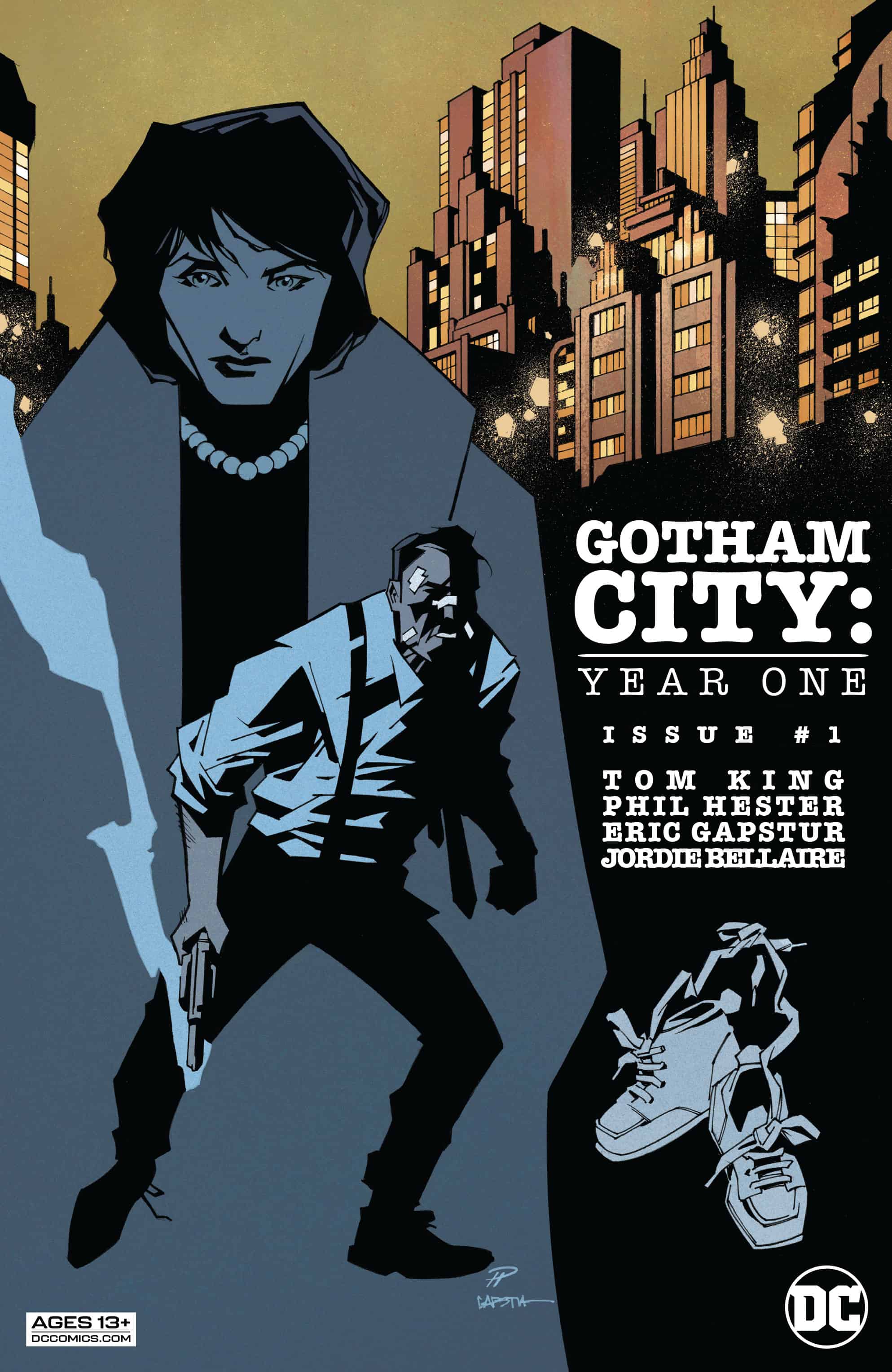 There once was a shining city on the water, a home for families, hope, and prosperity. It was Gotham and it was glorious. The story of its fall from grace, the legend that would birth the Bat, has remained untold for 80 years. That's about to change. Superstar creators Tom King and Phil Hester team up for the first time to tell the definitive origin of Gotham City: how it became the cesspool of violence and corruption it is today, and how it harbored and then unleashed the sin that led to the rise of the Dark Knight. Two generations before Batman, private investigator Slam Bradley gets tangled in the "kidnapping of the century" as the infant Wayne heir disappears in the night…and so begins a brutal, hard-boiled, epic tale of a man living on the edge and a city about to burn.

Hardboiled detective stories are much more than simply first person narrated crime stories. The protagonist needs to be unsentimental, somewhat mundane, and not obviously heroic. The story needs to have a vivid down to earth realism that doesn’t shy away from violence, sordid urban backgrounds, and (sometimes) a fair share of sex. In short–almost every quality found in the books published by Hard Case Crime.

King’s writing in Gotham City Year One #1 is spot on for the genre. The spirits of Raymond Chandler and Dashiell Hammett live in these pages (though not so much Mickey Spillane as it lacks the more graphic scenes that Mike Hammer often found himself in). As a more modern comparison the beginning of the story is not terribly dissimilar to what one would find in a Dennis Lehane novel.

Main character Detective Samuel “Slam” Bradley is a no nonsense private eye who’s handled divorces and marriages and missing persons. He’s worked for D.A.s and defense attorneys. He considers himself a man of reputation and accomplishment. So when a woman gives him a hundred dollars to deliver a letter he at first bristles at the job–he’s not an “errand boy”. Of course every fan of hardboiled detective stories knows exactly what happens next: the mundane job starts spinning out of control, sucking the detective deeper and deeper into the unexpected. Gotham City Year One #1 wastes no time hitting its stride in this respect. It only takes a few pages for King to put Bradley in exactly that position.

It is worth noting that Gotham City Year One #1, following the conventions of the genre, is verbose. There is an advantage to the story being adapted to comic form in that a little less time needs to be spent on descriptive narration because we have images to inform the story (for instance we wouldn’t have to be told a female client’s legs “go all the way up” because we could see it). But that doesn’t mean King skimps on the narration. And, like the novels, this narration is as much about setting a mood as it is about exposition–sometimes more so. It is a wordy, at times overwritten, comic book. But it’s supposed to be.

Saying King has is verbose, though, is not to say that the issue’s art is in any way lacking. That said, the style might surprise you. This is not a dark world filled with characters perpetually in shadow. Bellaire’s colors are surprisingly bright. Hester’s pencils and Gapstur’s thicker inks create harder angles which somewhat unexpectedly make the characters feel softer. There are times when Slam Bradley’s jawline evokes the classic Dick Tracy.

The art team also repeatedly uses a convention throughout the issue that adds to the overall feel of this as a genre book. There are a few places in the issue where characters (mainly Bradley) appear absent a background: early in the issue Bradley is sitting at his desk set against empty white space. And in a number of places characters appear effectively in profile, either black on white or white on black. These artistic choices are effective at keeping the story centered on Bradley, something very important because everything about this story is filtered through his mind. We may see what’s going on, but until Bradley tells us what it means to him we can’t be sure of how it fits into the story.

Gotham City Year One #1 is a hardboiled detective story, and it’s a very good one. If you have an aversion to this genre, it is probably not for you. But for everyone else, especially genre fans, this is an exemplary entry and easily one of the best comic examples in a long time.