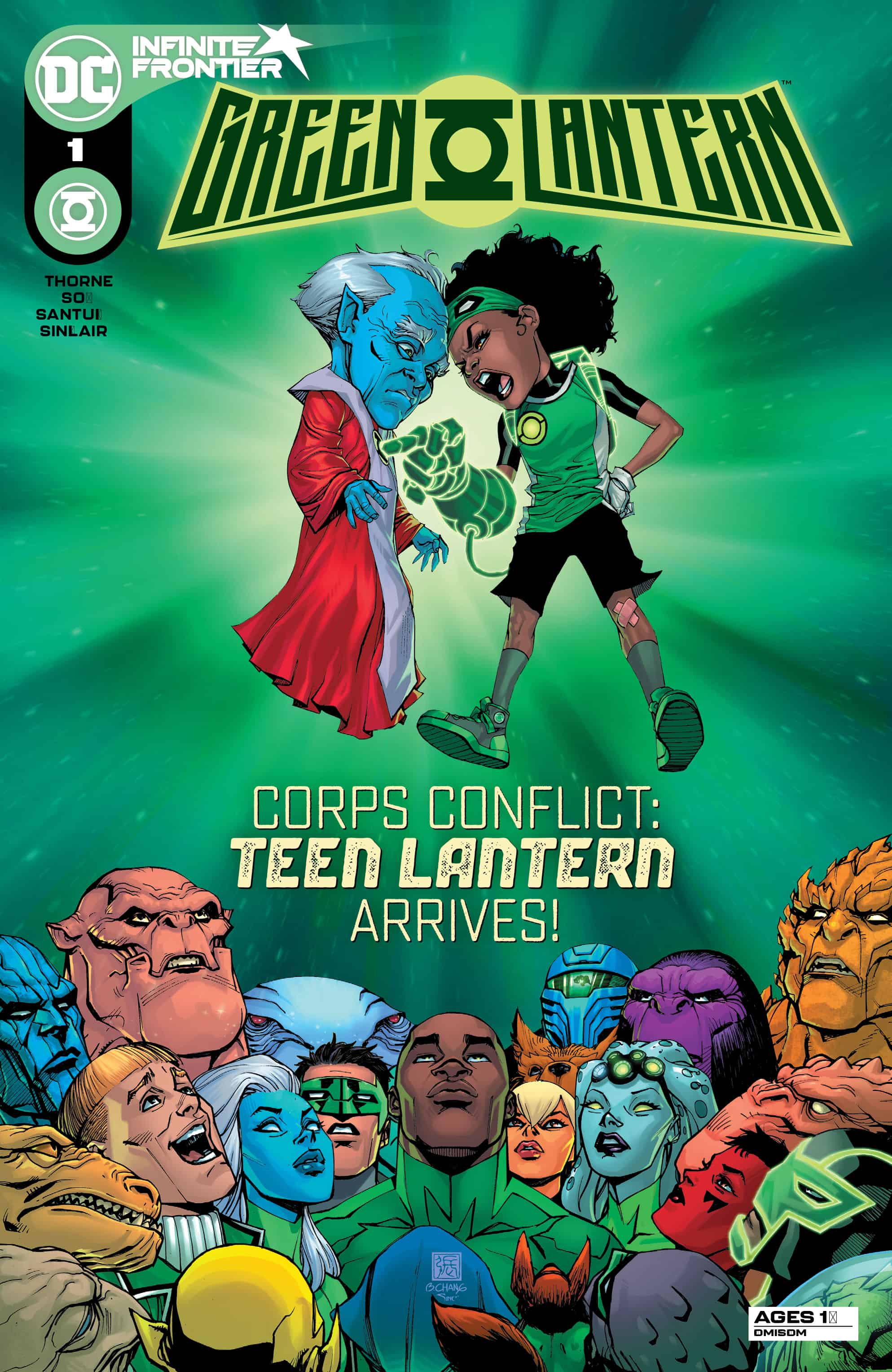 As this new Green Lantern series begins, the newly formed United Planets and the Guardians of the Universe hold an intergalactic summit to decide who can best serve and protect the cosmos from danger. With the majority of Green Lanterns called back to Oa, John Stewart arrives alongside Teen Lantern Keli Quintela, whose powerful gauntlet could be one of the most powerful and unstable weapons in the universe. With the entire landscape of the universe in flux, is this the end of the Green Lantern Corps...or a new beginning? 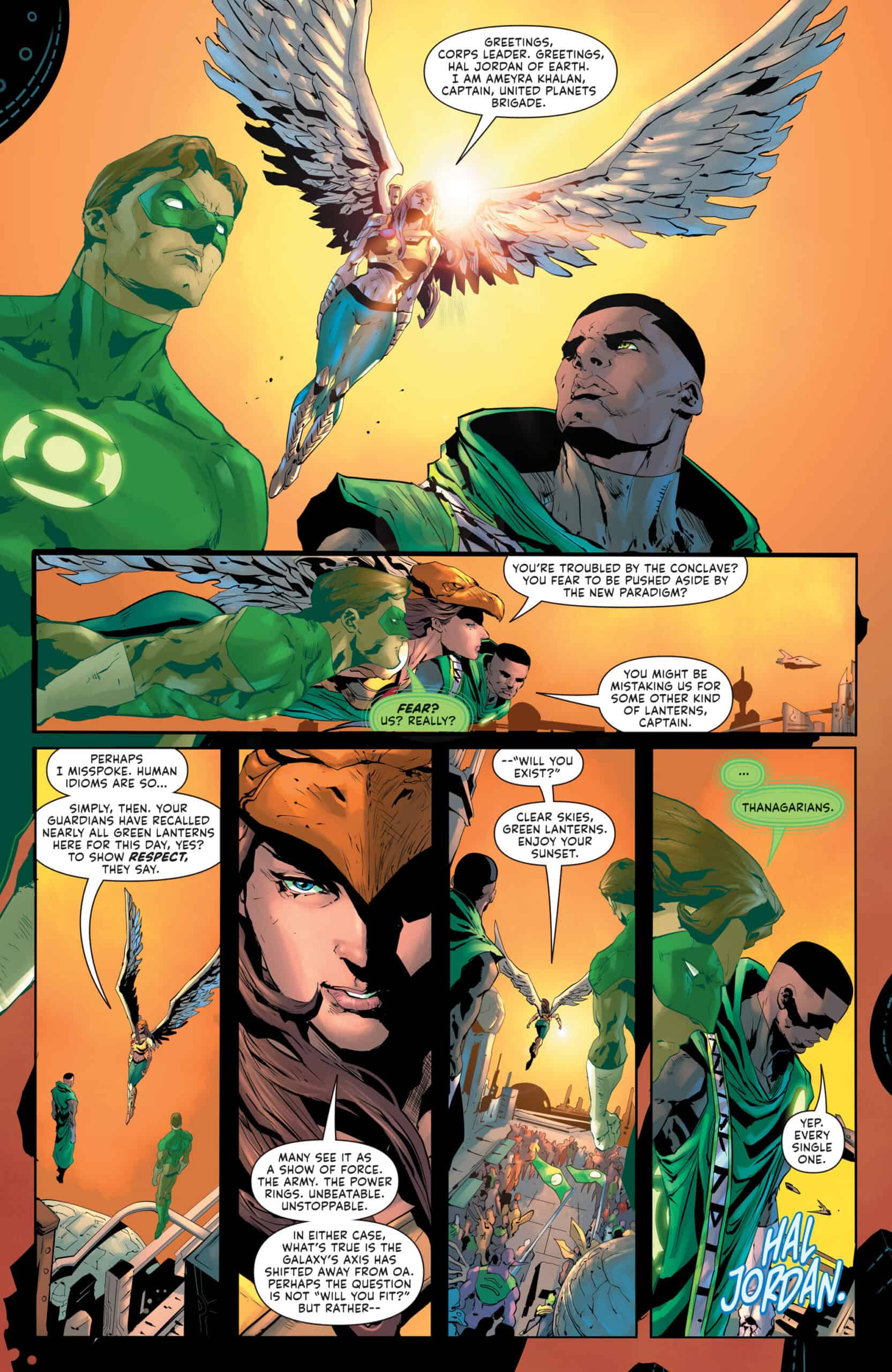 If you were not a fan of Grant Morrison’s run on The Green Lantern and were waiting for a more traditional Green Lantern series, it would appear your time has come at last! The new launch is certainly far more grounded than GMo’s work. Soy and Santucci combine for a visually stunning book full of clean lines and innovative design work. Alex Sinclair is, of course, one of the top in his field in terms of color work and is on full display with this issue. Rob Leigh is also among the sharpest letterers in the business. The move to have the Guardians’ orders as sound effects work was incredible to see in action. None of this comes as much of a surprise given the level of talent DC put onto this book. The bigger wildcard at play, of course, is Geoffrey Thorne and what his vision for the franchise would look like.

He does not disappoint. While his work on Future State: Green Lanterns felt slightly aimless at times, the vision in this book seems crystal clear. We’re seeing more a return to themes and tropes that catapulted Green Lantern from an often dismissed series to a blockbuster title for a decade. We’re seeing the rest of the Corps begin to reemerge after they simply disappeared from publication a few years ago. There is the familiar trope of morality in policing and the book wisely questions that in relation to the GLC here, setting up potential for some highly relevant stories in our near future. The inclusion of Teen Lantern as a central character is also rife with story-telling potential but also sits at the intersection of things I love about the series and my criticism for this first issue.

Starting out, the book is back to being very Earth-Lantern centric. Yes, there are plenty of great stories to be told with these characters but there are also literally thousands of other characters in the toy box, dying to get out. With so many DC books featuring backup stories (with the expanded page count), it seems like not making Green Lantern an anthology series is deliberate and nonsensical. There is also the issue that this book is fairly new-reader unfriendly. It has scattered exposition that briefs the reader on some of the broad strokes of the United Planets, the atrocities of the Guardians, and some basic character framing, but generally speaking, a new reader is likely to have a lot of questions. Still, these are minor gripes in the grand scheme of things and I remain excited to see where we go from here!

Green Lantern #1 is a visually stunning book that sets off what promises to be an interesting new era for the franchise. From #DCComics @GeoffThorne @dextersoy @MSantucciArt @Sinccolor #RobLeigh