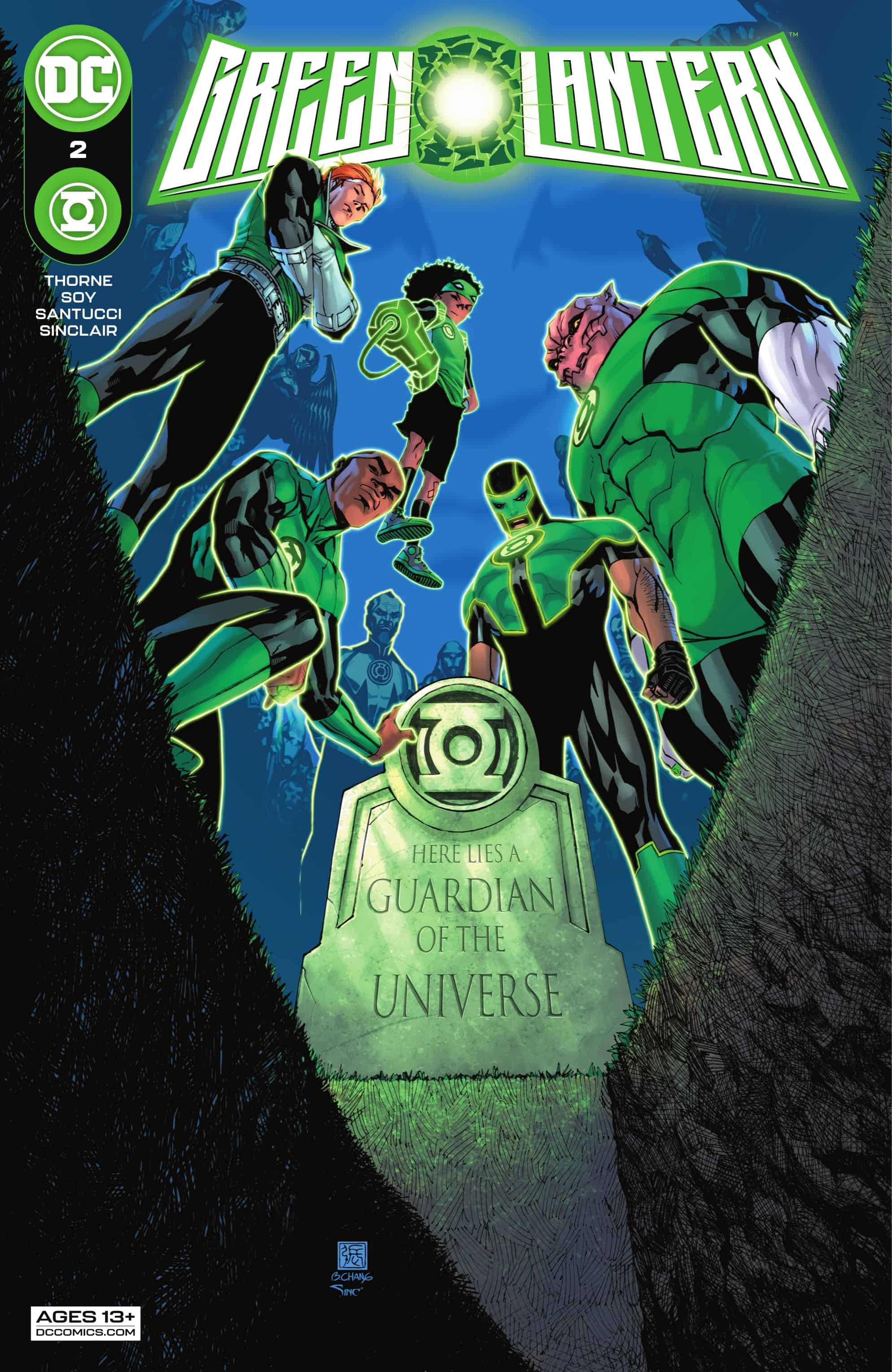 A Guardian of the Universe lies dead, and the universe teeters on the brink of war. As the summit of the United Planets and the Green Lantern Corps falls into chaos, an even bigger threat looms. With John Stewart reassigned to the role of an ambassador, a surprise appearance by one of the newest Green Lanterns may be all that stands between the Corps and oblivion. (Spoiler: it’s Far Sector’s Jo Mullein.)

Geoffrey Thorne is moving from shock to shock. His debut issue on the new series ended with the death of a Guardian, and this issue ends with the destruction of a large portion of the Green Lantern Corps.
Is it a sustainable mode of storytelling? Not in the slightest. But as a one-two punch to set up a status quo? It pays off.

This issue picks up a slight bit of time after the first, opening with a big action scene featuring Guy Gardner hitting a dragon in the face, followed shortly after by a burial ritual for the fallen Guardian.
After the ritual is finished, Thorne moves into sliding the rest of the pieces into place. Oa joining the United Planets renders several Green Lanterns redundant, which sets them up for one half of the issue’s big narrative thrust: John Stewart is leading an army of Lanterns into deep space to investigate the Dark Sectors.

It’s a cautiously thrilling development. Green Lantern is usually at its best when it embraces space opera-style sci-fi, leaning more into Emerald Knights than Space Police. Grant Morrison showed that there is a lot of possibility in the weirdness of the Lantern’s corner of the DCU, and this is probably the perfect way to kick it off.
The other good way to kick it off is through the explosion that rips through Oa shortly after John’s departure. It is the more shocking but less satisfying bit of necessary table setting for the new series. It achieves what it sets out to do—that is, finishing the refocus of the greater narrative of the book from a larger group into smaller, tighter groups of characters with their own sets of interconnected stakes and consequences—but the event itself feels a bit rote once the initial surprise has worn off.

However, a big but predictable twist ending isn’t a reason to dismiss a book. Thorne, along with artists Dexter Soy and Marco Santucci and all-time great colorist Alex Sinclair make this setup look great. Both look great with Sinclair’s colors, with Soy’s providing lots of kinetic, angular action, and Santucci giving a smooth, clear line that gives off positive Alan Davis vibes. Thorne has a grasp of what makes GL appealing: high-flying action, big sci-fi drama, and a willingness to blow things up.

It’s pretty exciting to see where things go from here, and the book looks to be in pretty good hands.

Green Lantern #2 raises the stakes and shakes things up while providing the high sci-fi action and drama the title deserves.