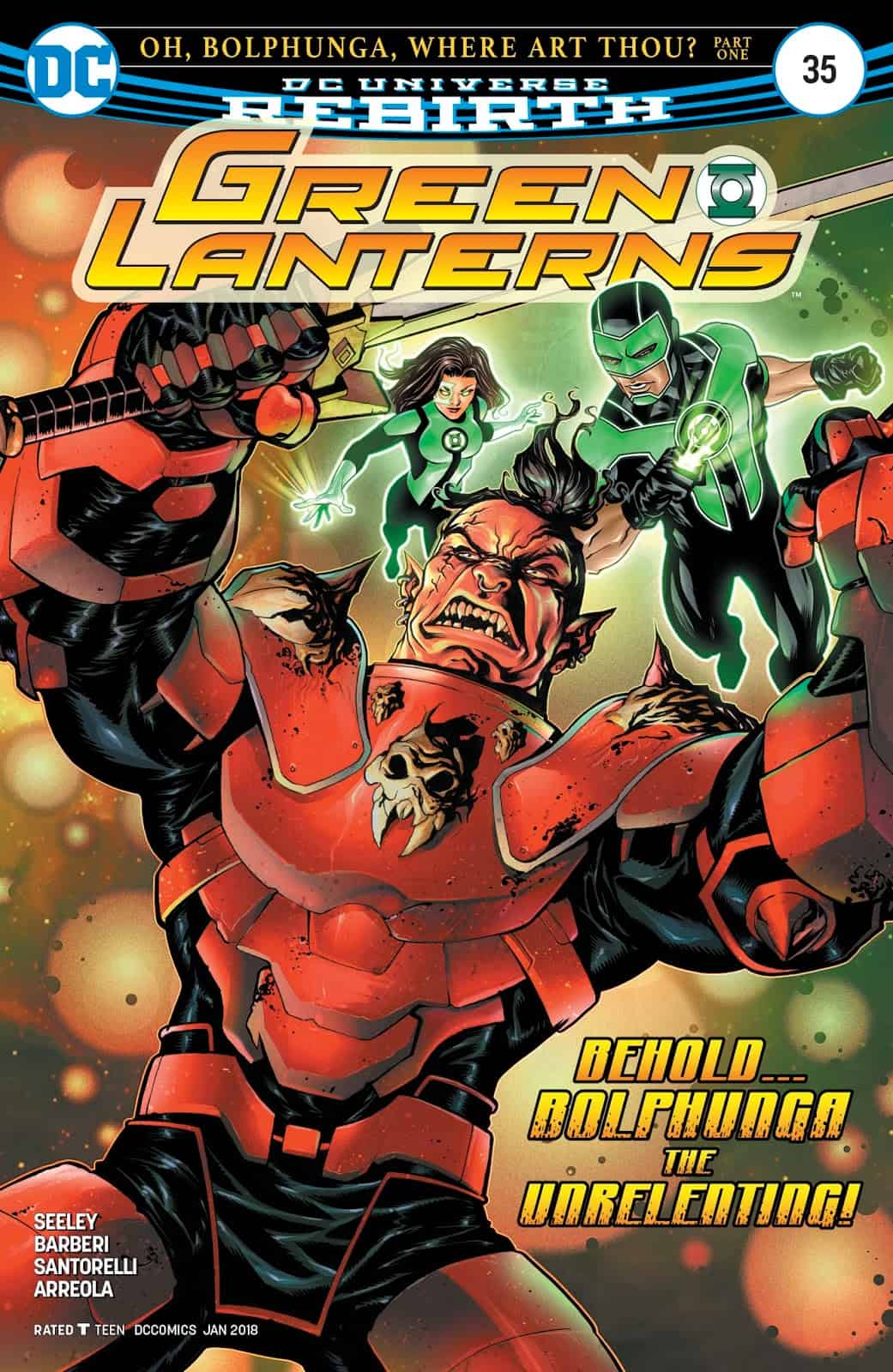 Following the adventures of Jessica Cruz and Simon Baz, the rookie protectors of Space Sector 2814!

Jessica has Social issues, and extreme anxiety. This has hampered her ability to function in society, but as a result, also given her the ability to overcome great fear.

Simon is a man who is trying to escape his past. He was caught in a bad situation and most of the planet thinks he was an extremist Muslim Terrorist. He is also having a hard time finding a place on Planet Earth these days.

Failure to launch meets Alien Technology, that literally will launch them into Space. ( Oh the irony!)

Jessica has just worked up the nerve to ask her boss at the restaurant she works at, to put her in Coach! She thinks she can handle the job of a server. I mean she did just hold up the weight of an entire planet last issue, so this should be a piece of cake right?

Well fate has other plans, and she is tracked by an Alien, whom most DC Comics Readers may recognize from the Classic Alan Moore tale “Mogo Doesn’t Socialize” as the one and only Bolphunga the Unrelenting (Ugh!, but more on this later).

At this same time, e see Simon has used the Superhero version of Tinder and hooked up for the night. He is staying on an apartment in the Green Lantern Corps NBase of New Oa, which I am quite certain is Mogo. He is here, because his reputation is shot on Earth, and he left his sister’s place to be more independent.

In an attempt to Duel the Green Lantern of Earth Bolphunga has traveled to this very restaurant to Challenge Jessica. In no “Short Order”, the place is Trashed in the fray. As you can Imagine Jessica is quite upset stating “It took me a whole week to get up the guts to talk to my manager!” They then battle in the streets having blown rather large holes in the side of the walls. Looks like Jessica, will not be getting that raise. 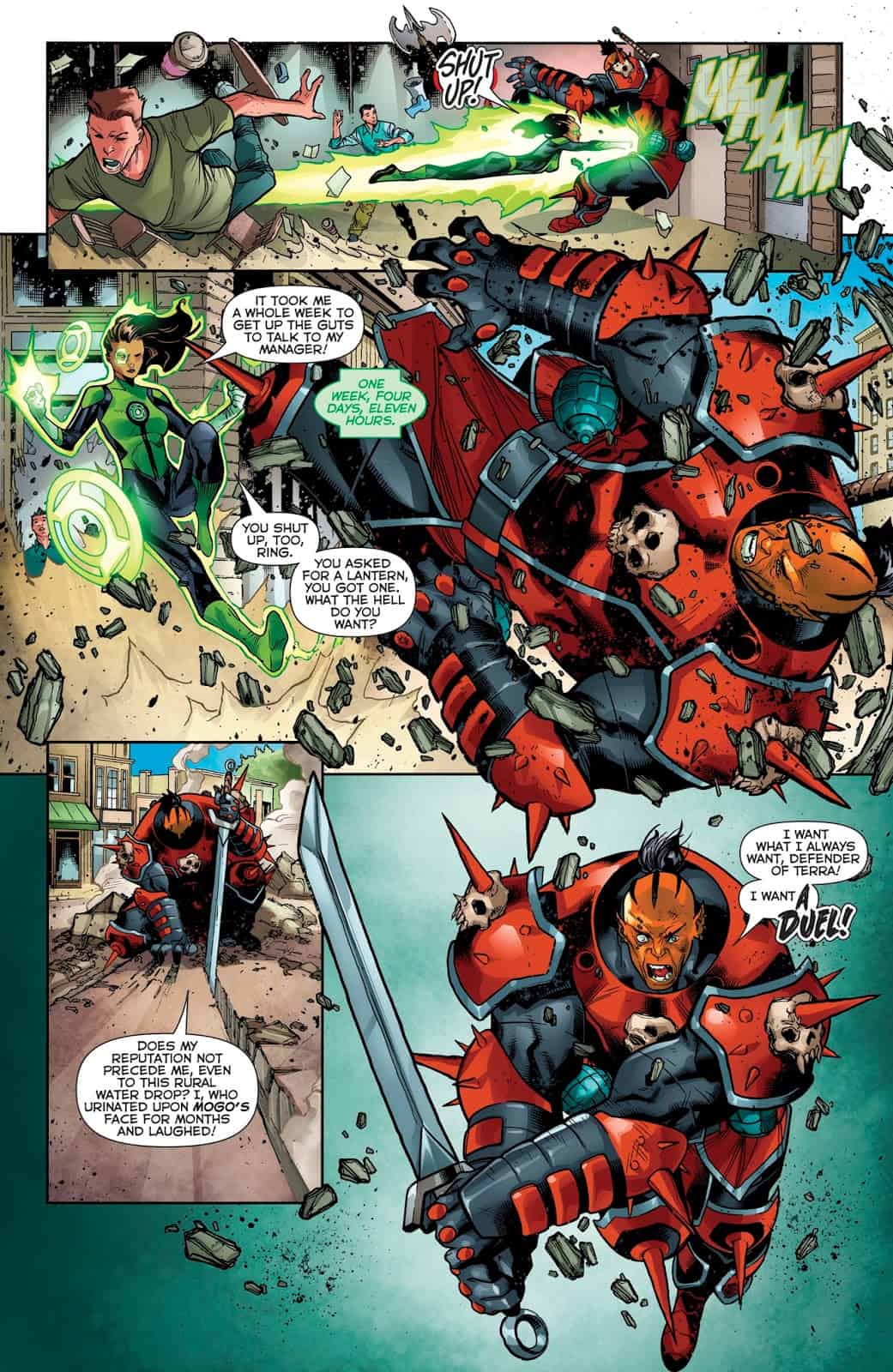 Simon finishes up his tryst with a hero called “Night Pilot”, who asks that they “Stick to the Cape names.” Simon is alerted that Jessica needs his help by the ring, and in lieu of Cab fare, offers to drop Night Pilot off back on Earth. He is after all quite the gentleman, but he also realizes the true nature of this Hook up and feels a bit rejected.

Continuing with the character from the prior two issues ( see Green Lanterns #33-34) we see the seeds of a plot involving the Captain of the Brinkmanship who saved the Molite Refugees , Regent Vok. She had her daughter with her and she was seriously injured by a solar Flare as the ship got too close to the Crumbling Planet Mol. In a mysterious investigation, we see that it may be the Molites are not as innocent as the Green lanterns thought, as the Inspector points the evidence leads towards the Molites may have killed a citizen.

Simon arrives on Earth and Jessica tells him that she doesn’t think that Bolphunga’s Heart is in this Duel. It turns out that she was correct, and he was biding time to explain that he needs their help.

After a bit of exposition, we find out that Bolphunga was recently released from the Science cells on New Oa, and that he was a squealer. He ratted out his entire gang to get a commuted sentence. He also has an mysterious benefactor that made him this offer to be released, all he had to do was the old standard “When the time comes I’ll Ask for a favor.” Yeah, that never causes a problem!

In the greatest Character Assassination since Cyclops in X-Factor, we learn that Bolphunga was a fraud. He was beaten at every turn in Prison, and even by supposedly weaker opponents. Like Simon, his reputation is worthless. Bolphunga the Unrelenting is a sham! He explains that the favor asked of him is not so easily completed. He is to Murder Boff the Unkillable, his Father. He cannot do this, and he then receives a message that the price will be his life now, and this is why he needs the help of the Green Lanterns. 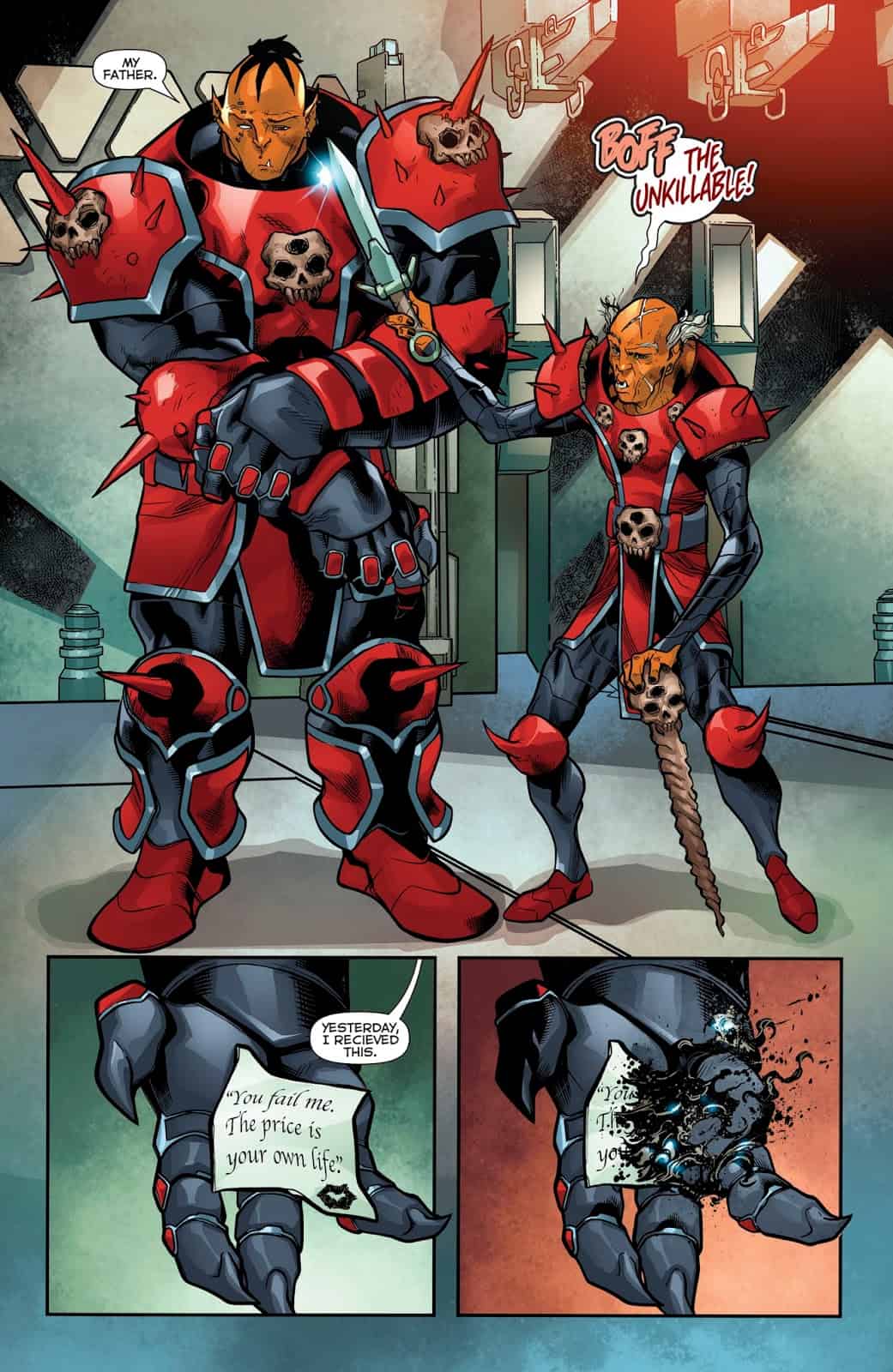 Finally we see an image of his Benefactor from the Oa Science Cells. She has made it to Earth. A friendly truck driver offers to give her a ride, and she promptly sucks out his life and viscera leaving him a desiccated husk of flesh on the ground. 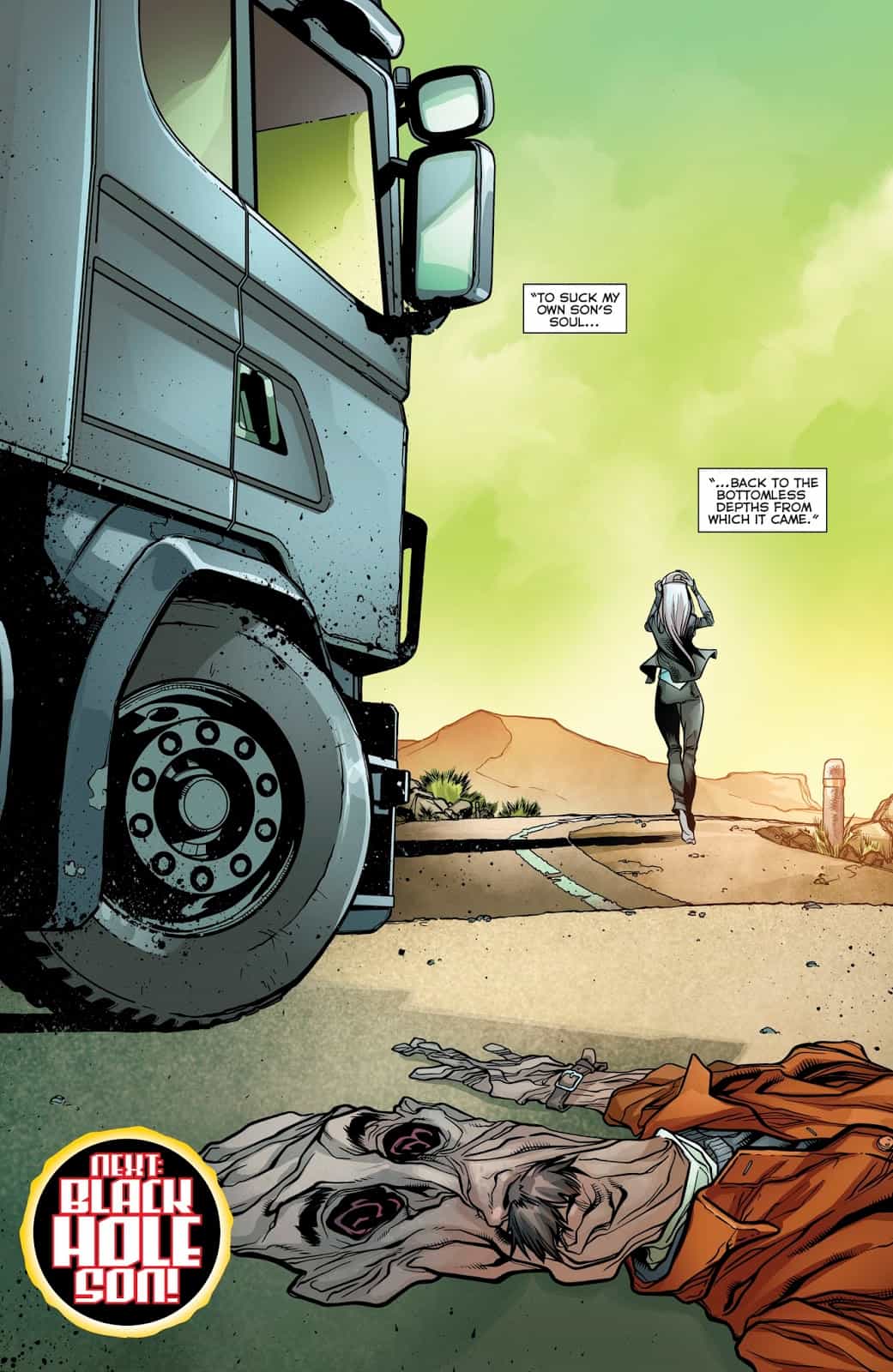 Final Thought: I feel that you can revisit old cannon or non-cannon characters and tell good stories. This has been accomplished by DC in many years past, but the Rebirth Universe is playing in the Deep end of the pool there and in way over their heads! I do not mean to put the Writings of Alan Moore up as a “Sacred Cow” here; however this is an absolute blaspheme and perversion of the tale that causes a retcon of continuity that would make an X-men comic fan head spin! That said, I do not like this story. It is a lame representation, and blatantly using the shoulders of a greater story to fill in gaps and add gravitas to a lackluster plot. I honestly rated this book as well as I did, for the Art, and the few panels in the beginning with the two Lanterns and showing their I will post an image of the Animated tale of Mogo and Bolphunga, it is in a series of Vignettes called “Green Lantern, Emerald Knights.” 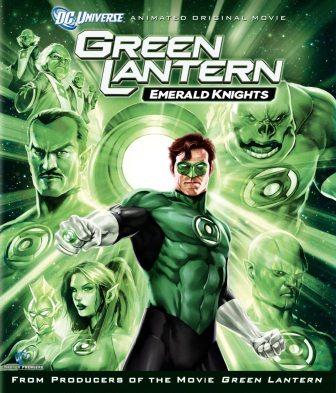 I like the direction that the B Plot is going, with the Molites. This shows that there are consequences to the meddling in affairs that are beyond their experiences. Also mingled with the whole”Failure to launch” aspects of the book. These are very real character traits, and we can understand and empathize with their struggles.