The consequences of the Red Tide on Planet Ungara, and The lessons that the Lanterns learn about their actions and themselves. 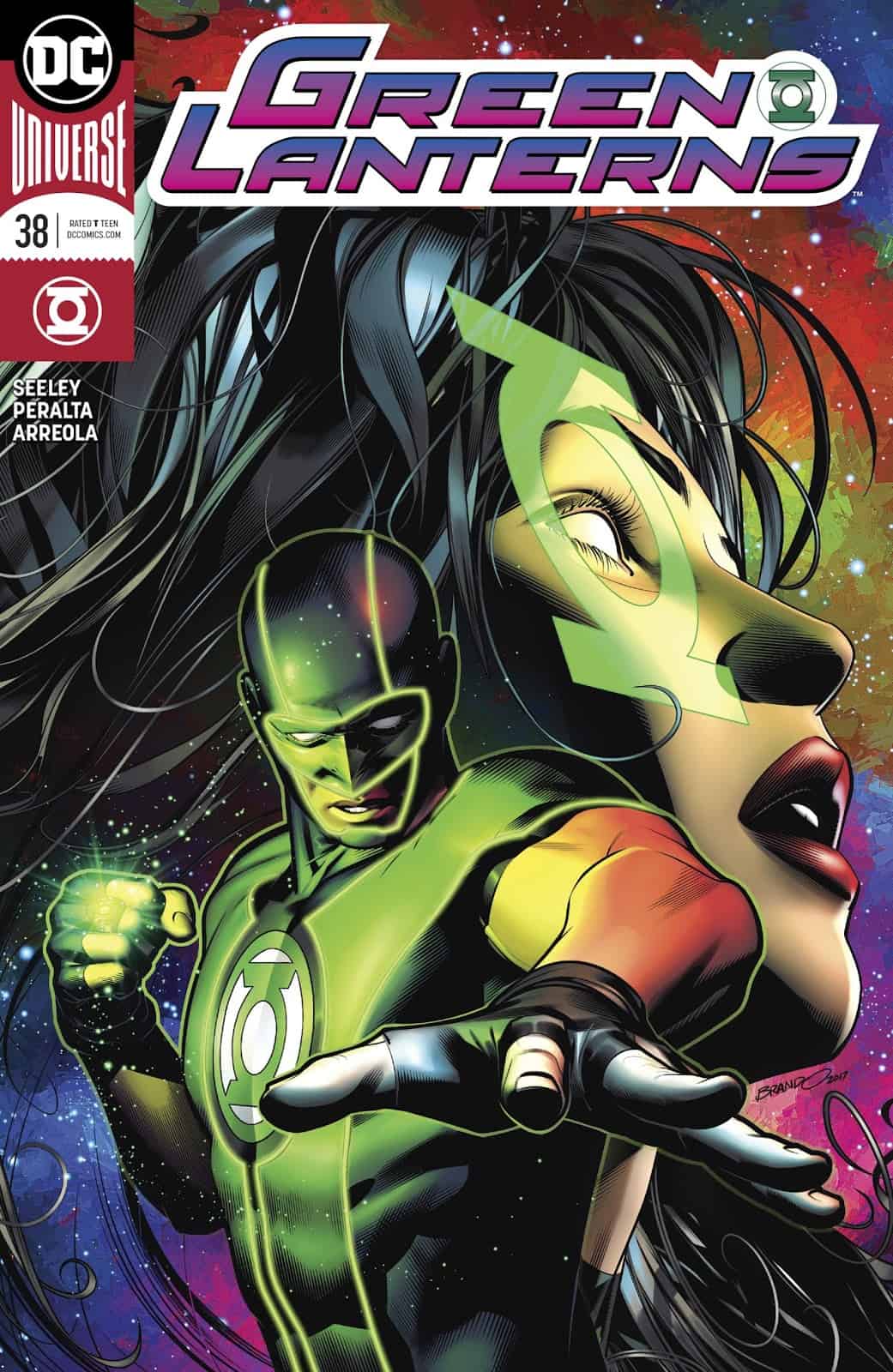 The Planet Ungara is involved in a Civil war. This was brought about by the arrival of the Molite Refugees, and the death of a highly decorated Military Official.

Now in a veritable Civil War the Regent Vok, Simon, and Jessica are holding a mob at bay. As you know a Green Lantern is not permitted to use lethal force, but the Ungarian Magestrix is not under such restrictions. She swings her blade to stop the rebellion of her people called the Red Tide, and she swings it fiercely. (Just last issue she defeated Jessica and Simon in hand to hand combat.)

As she interrogates a captive, Jessica winces as Vok thrusts her sword through the man’s leg. She is starting to understand the brutal nature of the universe outside of Earth, and second, guess her decision to bring the Molites here. 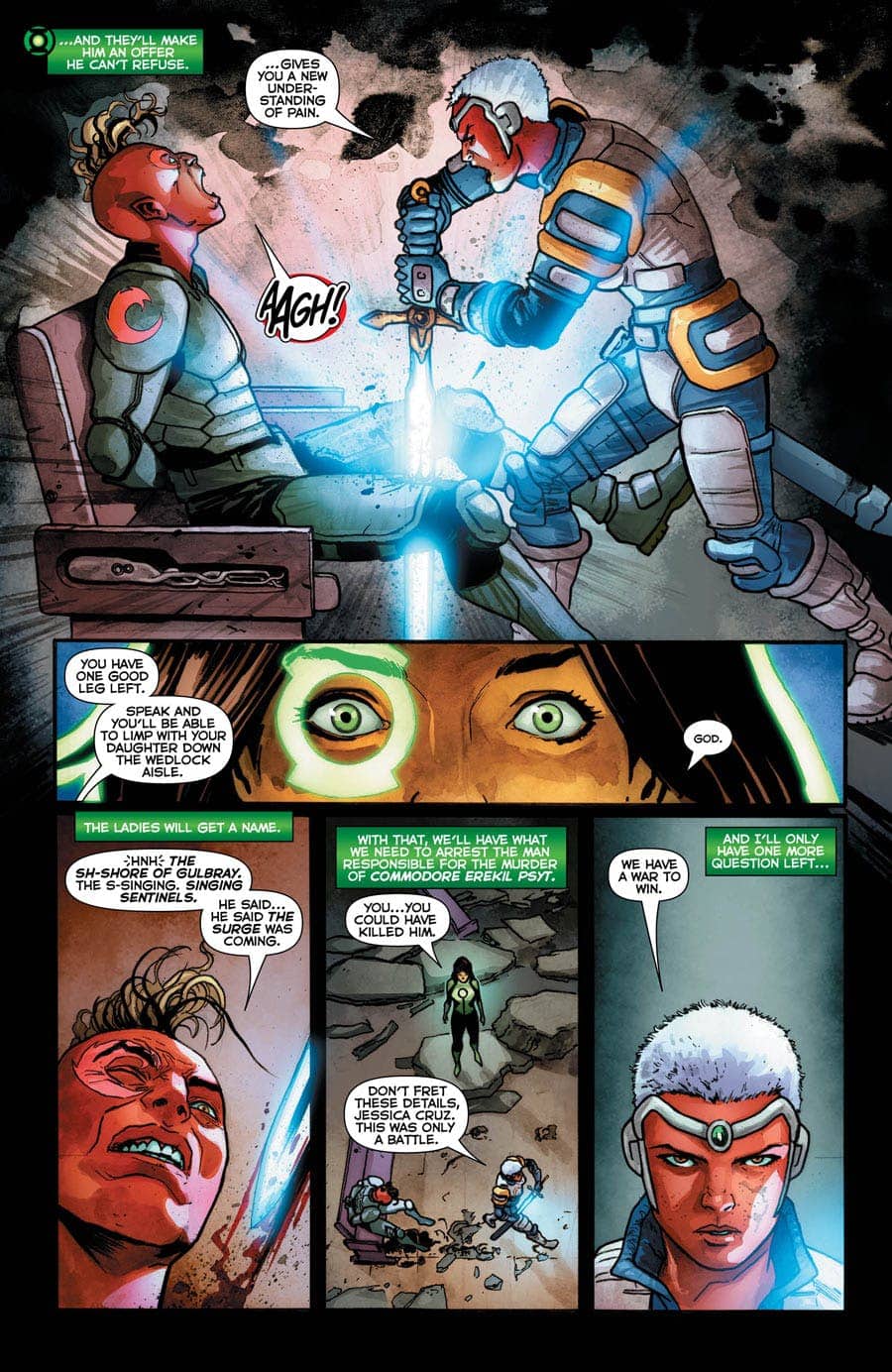 Meanwhile, Simon is in the Prison Cell talking to the Pod Father of the Molites. While he fees shame that he stole the metal to make his sacred adornments, he did not Kill the Officer. The evidence sets him free, but he feels guilty. Guilty that he should have listened to the will of his people and perished on Mol when it was destroyed. 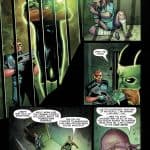 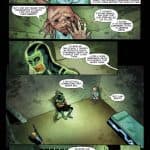 Jessica calls Simon to her for a meeting high above the Planet. She wants to be away from the eyes and ears of the people. She tells Simon that she is not sure that they should stay and help. That they may not have done the right thing by helping.

Simon asks if this is about her personal Anxiety issues and she lays into his personal issues. She Roasts him pretty good. Pity, she didn’t know that he was sleeping with Liseth as well, but nonetheless, they head off in favor of helping battle the Red Tide. 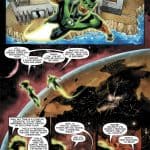 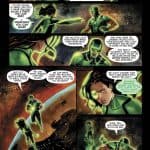 The Lanterns meet up with Regent Vok and determine their plan of attack. The Red Tide plans to launch a “Surge Engine” attack from the Shores of Gullbray. A symbolic gesture as during the Ungarian Civil war, these shores ran red with blood from the casualties of the battle there. The Red Tide took its name from this very scene. They argue, but eventually, Liseth is able to convince everyone to let her accompany them. She feels responsible, having been part of the Red Tide, and wants to bring an end to the Leader Kesh Cur.

Kesh is giving an impassioned Speech to his followers on the cliffs. The Attack comes from a Boat with the two Green Lanterns supporting them from the air above. Kesh Cur falls back into a nearby cave and is followed by Liseth and the Green lanterns with Regent Vok.

What they discovered is a Bio-engineering Laboratory. Not quite what they were expecting. Kesh tells them he chose this spot because the sounds of the cliffs covered up the screams of his test subjects. He changes his arm into a tendril after blasting Jessica and grabs Vok. There is a bit of Villian-Splaining going on, and all of a sudden Liseth thrusts her Mother’s Blade through Kesh Cur’s Chest.

Liseth, explains that he was never the threat that they perceived him to be. That he had no grand designs for the Surge Engine. She types in a code and is zapped by some energy. , and changed dramatically in appearance. She Grabs Jessica by the throat and reveals that Kesh was not willing to go Far Enough, as her Mother and Simon look on in bewilderment. 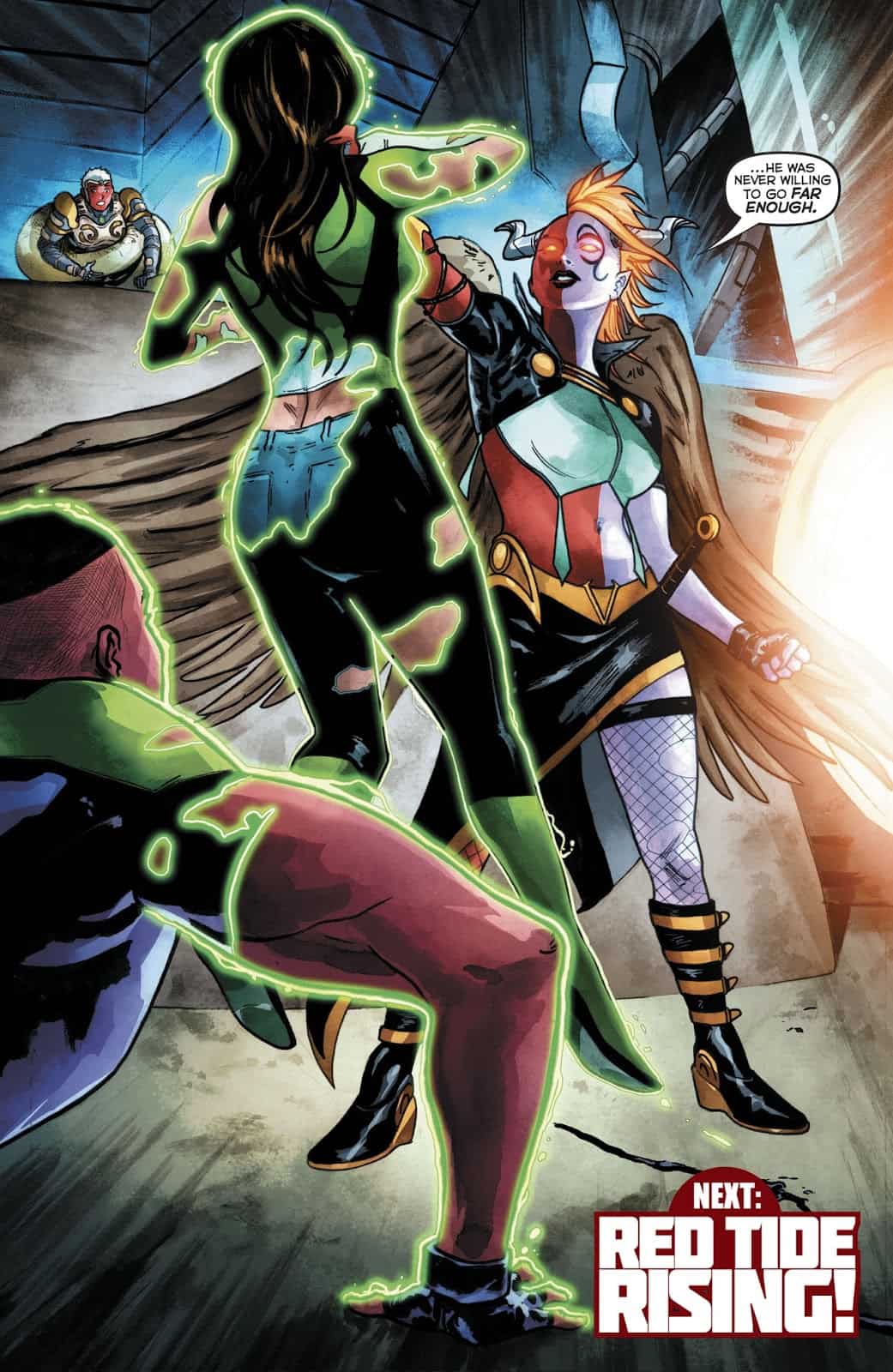 Liseth uses the Surge Engine to become an evolved Creature.

Final Thought: This story is a continuation of the consequences that interfering with an Alien Culture can bring. From saving Liseth’s Life on the Brinkmanship, and then to getting too close, by getting involved romantically with her. Simon is learning some big lessons. Lessons that we saw John Stewart and Hal Jordan learn many years ago. Jessica is learning about the politics of other worlds, and what it takes to see the big picture in the long run. Regent Vok is an excellent teacher, though Jessica may not be ready for the lesson. The story is getting good, especially after the mess with Bolphunga a few issues back. This book is right where it should be. Putting relatively obscure and unknown characters in difficult situations, and showing how the either mess it up or grow from the circumstances.