Guardians of the Galaxy #10: One Drax To Rule Them All

Things keep going from bad to worse for the Guardians! The newly-recreated Universal Church of Truth, led by Peter Quill's deranged father J'Son of Spartax, has resurrected a mindwiped Drax to be their new, secret weapon. But it's not just one Drax they've created - it's an army of him!

Elsewhere, the other half of the team, rallying around a dying Rocket, try to persuade the youthful, reborn Magus to side with them against the Church, which in a previous life he led... 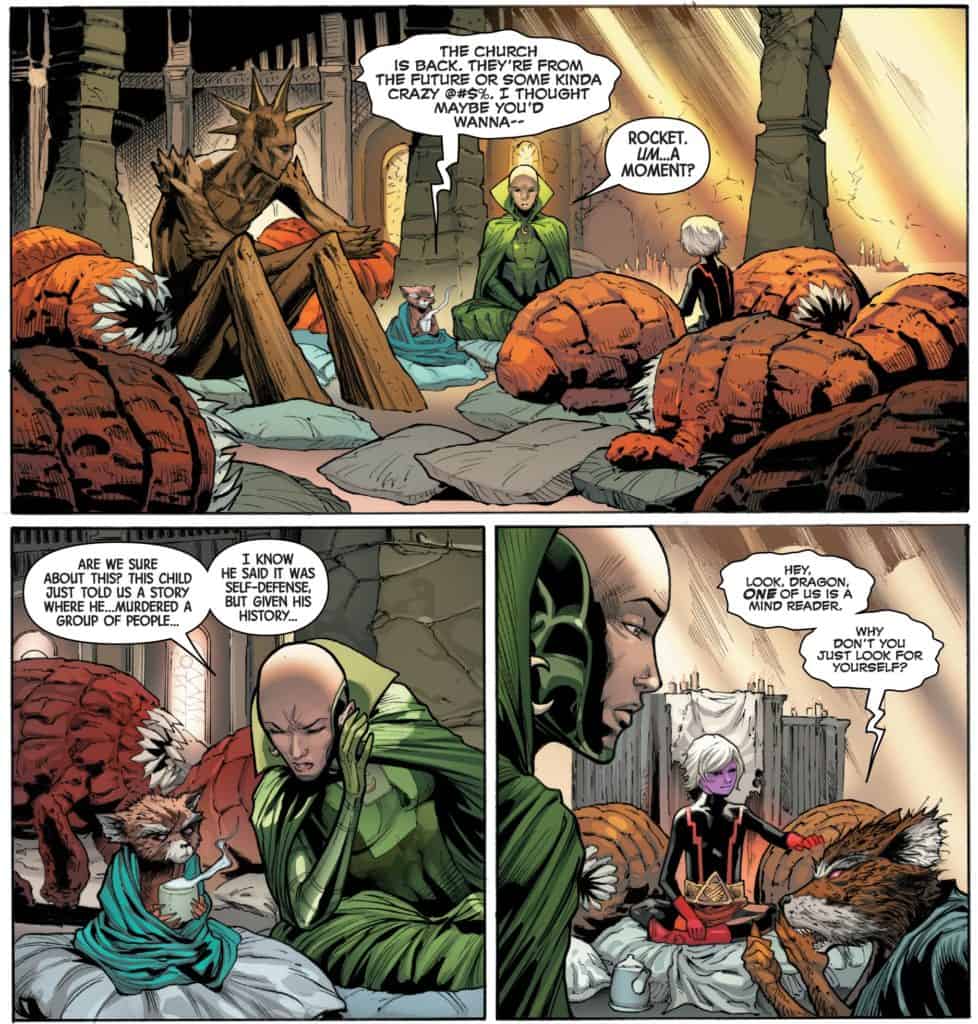 Will this desperate scheme work? Can even a young Magus be trusted? Can anything stop the Universal Church of Truth and its army of brainwashed Draxes?!

And will Rocket live long enough to see any of these questions answered?

In a relatively short amount of time, Donny Cates has not only become one of Marvel’s true work horses in terms of overall output, but one of the best writers in their stable, too. Thanos, Venom, Absolute Carnage, Silver Surfer: Black… and Guardians of the Galaxy, perhaps his best work for the company to date. The Guardians, a shining jewel of the Marvel Cinematic Universe, have struggled a bit to gain traction on page, at least in terms of creative consistency. But Cates gets what makes the team tick – that they’re a lovingly dysfunctional family – and then, proceeded to throw everything we know out the window and virtually start from scratch, taking a family that’s been scattered across the wind and rebuilding it from the ground up.

It’s been a risky maneuver, but with mostly positive results. The net gains have been a renewed emphasis on the dynamics between each member of the team, drawing them back in a bit at a time. (Yes, for the sake of not meandering too much I’m ignoring the team’s new kids like Beta Rey Bill and Moondragon, mostly because they haven’t contributed much and mostly function as placeholders while the team proper reconstitutes.) The biggest x-factors have been Groot’s newfound communicative abilities, Rocket’s impending demise, and now, Drax’s apparent lack of… not wanting to murder his friends.

Of course, Cates owes a debt to Gerry Duggan, who set everything that’s happened in this volume up in the preceding Infinity Wars miniseries; for this issue in particular, seeds were sown for the Magus’ return as a child in Tini Howard’s recently-concluded Thanos miniseries. Nothing happens in a vacuum and proper credit should always be given where it’s due.

In the end, though, all things will come back together, and the team will of course return to its core group, just in time for Al Ewing to take over in January as writer. Breaking teams down to their base components to build them back up is a time-honored super-team tradition. Think the beginning of Morrison’s JLA, “Avengers Disassembled,” or the X-Men venturing through the Siege Perilous. Doing so reinforces the fundamentals of what makes the team so great by showing the individual members’ struggles as individuals.

With all that in mind – and all we have to look forward to, knowing what the end result will inevitably be – it’s a bit disappointing, then, that this latest issue of Cates’ GOTG run feels like it moves at a snail’s pace. A good chunk of the issue is spent sitting around recapping Magus’ return and what he’s been up to since; far less is spent moving the story forward. Beyond Drax’s dramatic return, there’s not much else other than a not-so-gentle reminder of what we already knew – that Rocket is imminently near-death. Frankly, the way the issue is staged feels far, far too much like filler in order to stretch the story out to a full six issues for the sake of a trade collection in a few months’ time.

Unfortunately, the art doesn’t fair much better and is off its normal standard too. Cory Smith is a perfectly competent and capable artist. Here, though, his art looks scratchy and unfinished. Victor Olazaba’s inks may be the culprit, but he’s typically very consistent so I suspect he was doing the bet he could with what he was given. It’s not a dealbreaker by any means – just a bit more rushed than I feel like we usually see from Smith.

In the end, though, Cates’ and Smith’s Guardians of the Galaxy is still one hell of a fun ride, and one of Marvel’s most consistently fulfilling reads. One issue that’s slightly off its game is by no means reason to write this series off. With just two issues to go before the creative reins change hands, curious newcomers might understandably want to wait for the trade – but it’s to their detriment, because this is a series that’s best savored one issue, one month, at a time.

Though a bit of a slip from the book's normal high standards due to pacing issues, Guardians of the Galaxy #10 is still a more solid read than a vast majority of other books on the shelves. Pass this comic up at your own risk!

Guardians of the Galaxy #10: One Drax To Rule Them All