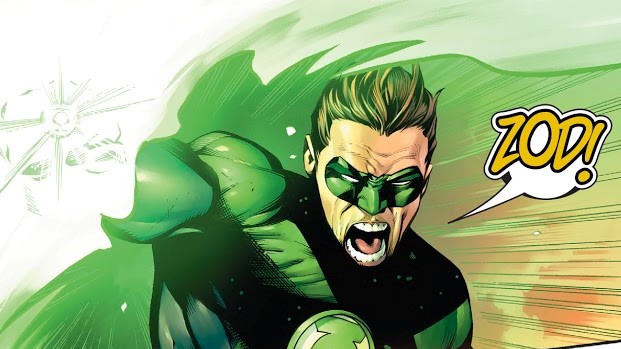 Hal and the Corps have retrieved the Guardians of the Universe, minus a few, now they must face a new threat, Zod! Will Hal and his comrades bring the Kryptonian despot to justice? Or will they KNEEL BEFORE ZOD?!?!?! (Promise I’ll only do one of those this arc) 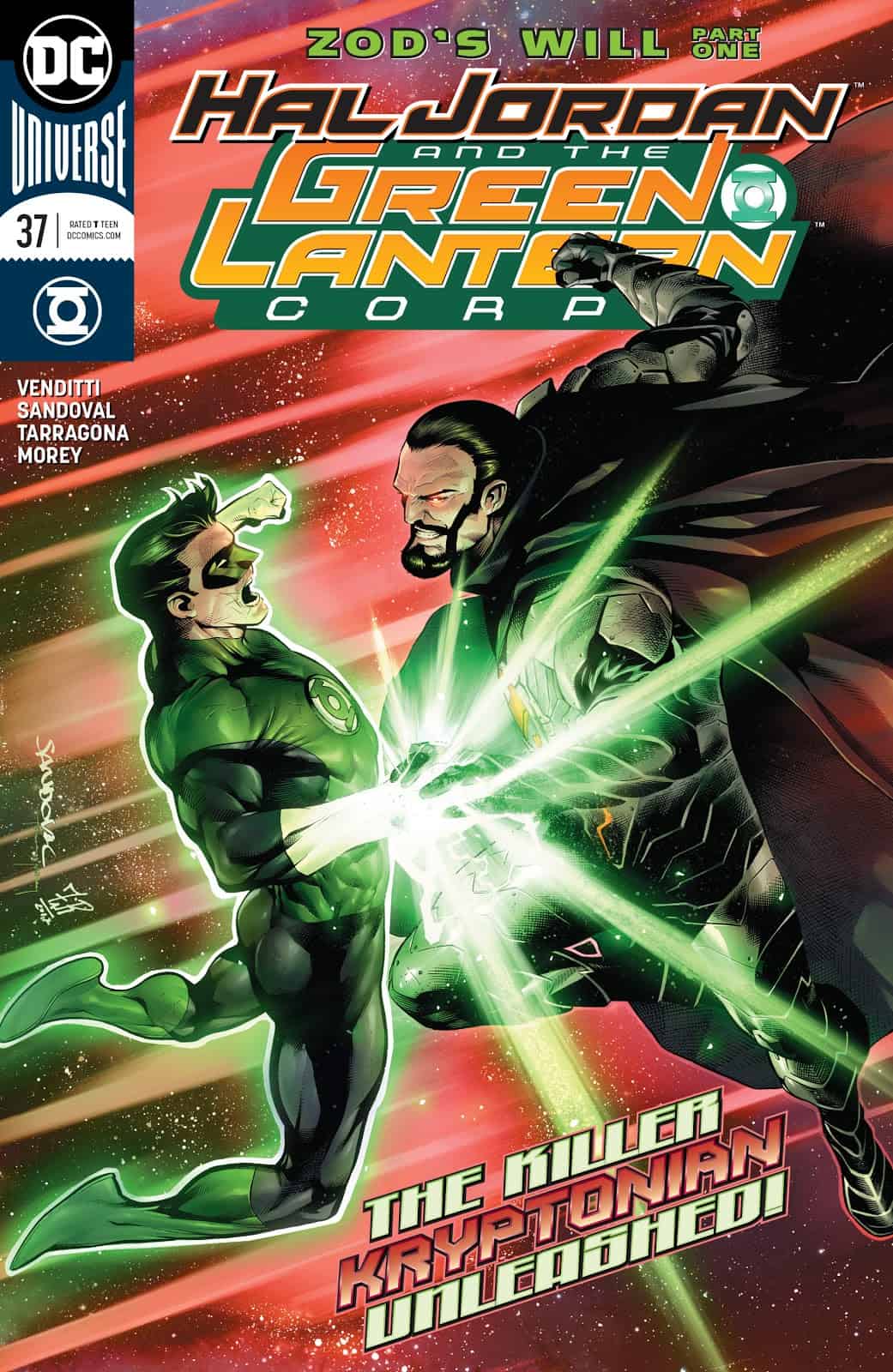 Zod and his Kryptonian family escaped the Phantom Zone with the help of the Superman Revenge Squad back in the “Revenge” arc (Action Comics 979-984 GREAT ARC) and escaped from Big Blue himself after razing parts of the Fortress of Solitude to the ground. Now the trio (who are just as powerful as Superman!) plus the Eradicator have been on the loose somewhere in the galaxy, and they have just surfaced! On Hal Jordan’s beat! The Corps better watch out!

We open on a familiar figure in an unfamiliar setting in the (very near) future, the planet Jexuul in Sector 2811. The figure crawls across the alien landscape, asking his ring to send backup, but Hal Jordan will receive no backup, for he is on this world with Zod! 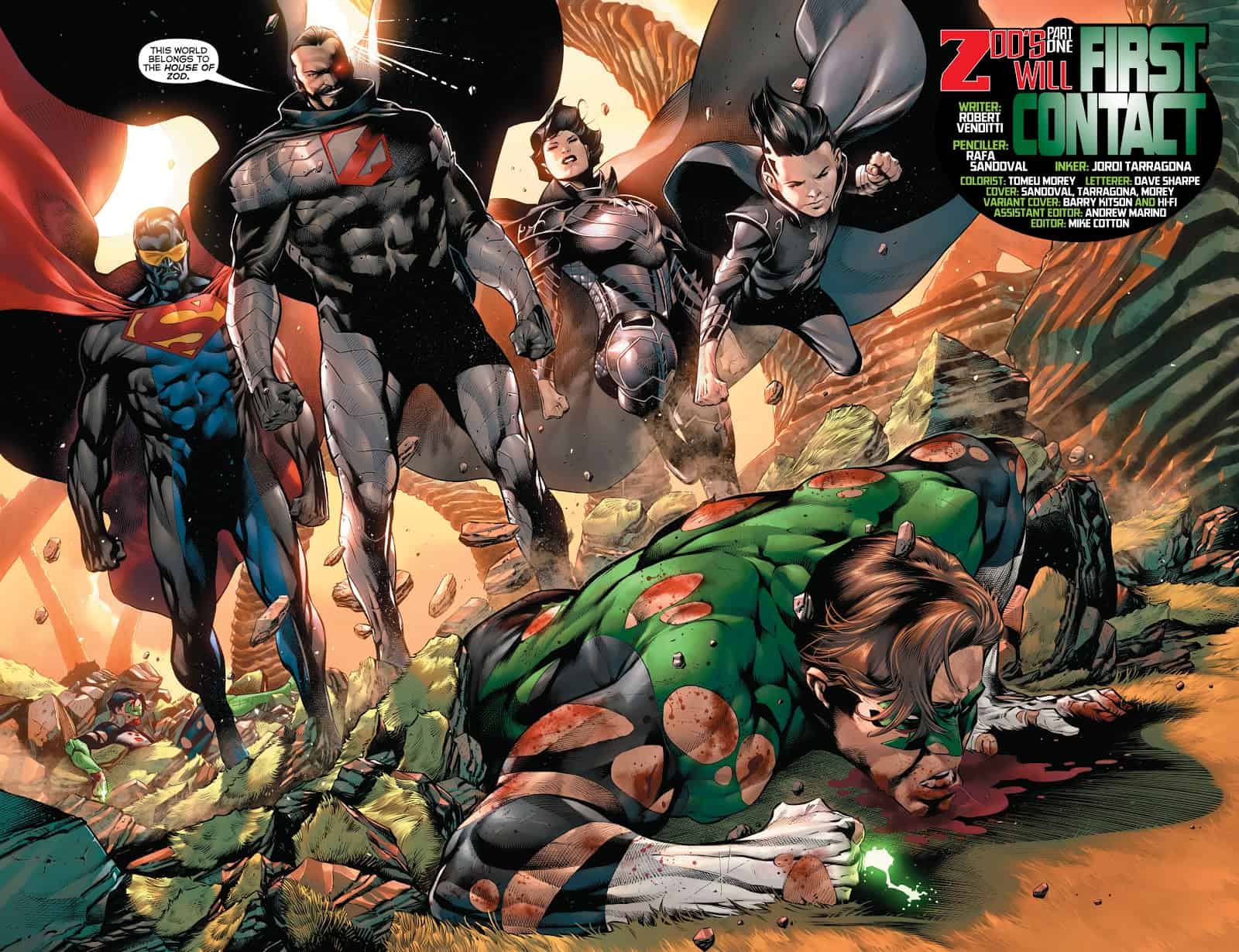 We cut to Jon Stewart, telling the Guardians he quits, they have a bit of really nice back and forth I was really happy to see (Jon has been busting his butt in their absence!) and Jon tells the Guardians he’ll stay for now, but he’s watching them! The Guardians have been responsible for a multitude of poor decisions over the years, from Blackest Night to concealing the nature of the yellow impurity in the Green Lantern Corps’ rings, Parallax! He storms out and is joined by Guy, who tells Jon he’ll back him no matter what he does. They patch in Hal and Kyle, en route to Jexuul, (told you it was near) who weigh in with some mistrust, but also some support, of all people Hal understands the need for second chances. 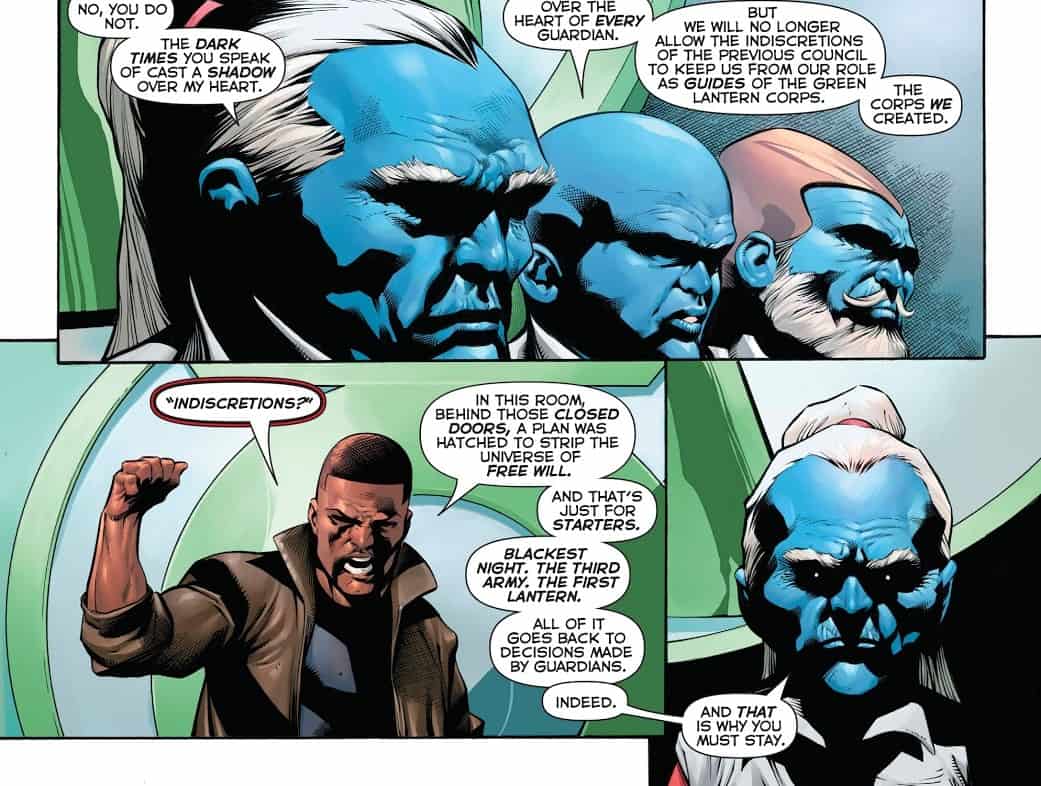 The duo arrives on Jexuul, investigating what looks like some unauthorized mining of a pre-interstellar civilization. (basically the Glc version of the Prime Directive, and violated nearly as often) After discovering some strange goings on from what should be a paleolithic society (like the mini-skyscraper they’re building) the Lanterns are greeted by a familiar face! Zod! Hal attacks on sight, because of course, he does.

Who wins this fight? How did Zod get here? What’s his son’s name again? Find out for yourself, pick up a copy of Hal Jordan and the Green Lantern Corps today! 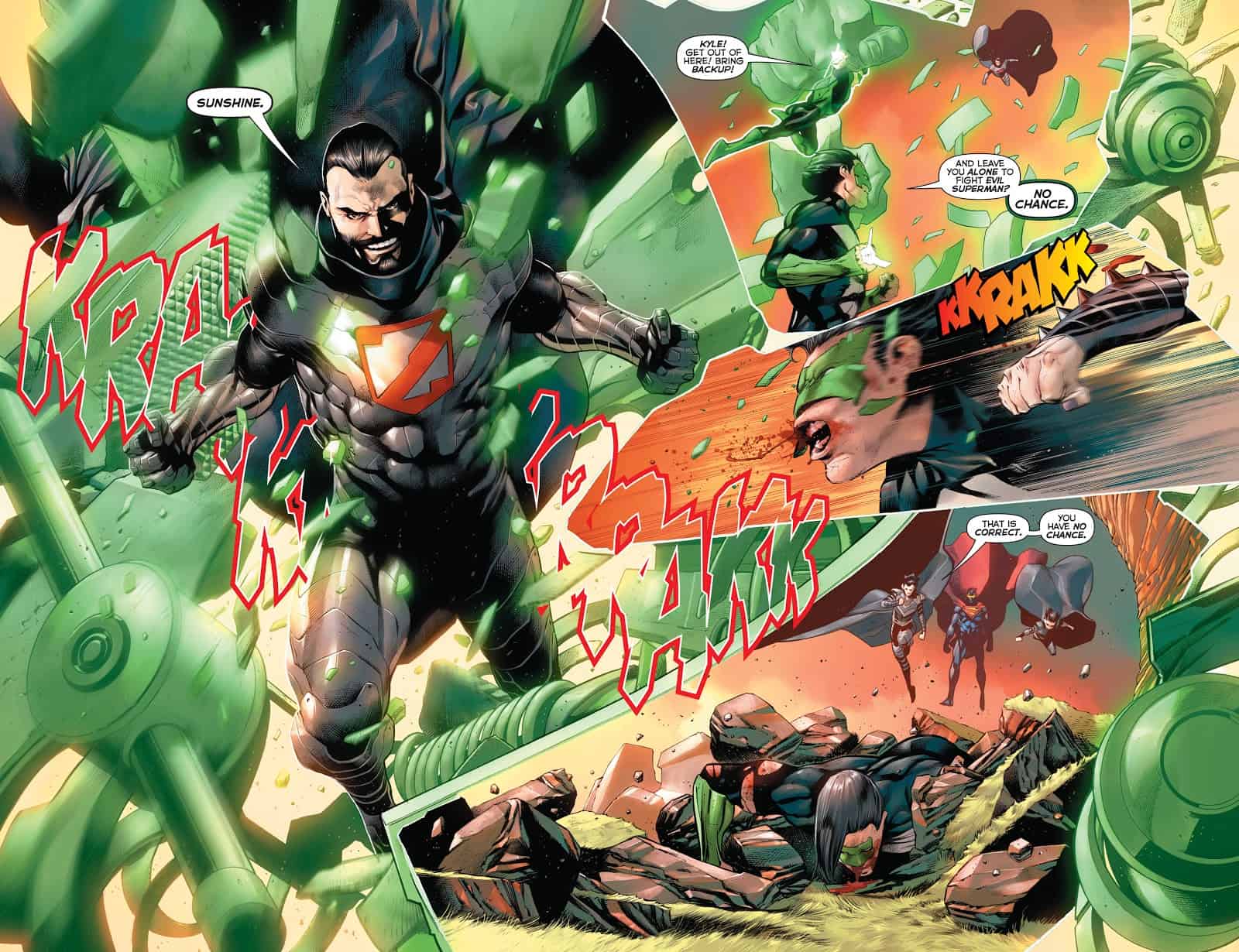 Man, I was stoked when I saw the ads for this last few months, the Revenge arc was one of my favorite arcs of 2017, this book seems to be a followup which is great because the ending was pretty open. The idea of Zod running off and finding another planet with a yellow sun and ruling over it isn’t too implausible, although I kind of think he would be more likely to hide out on Earth and enact his revenge on Superman.

I do have one small nitpick, and that’s the time jump at the beginning, which seemed kind of pointless since it jumped about 45 minutes just so we could see a preview of the ending before we cut to Jon and the Guardians, which was plenty interesting to hook readers I think. Not a big deal, but just a little unnecessary feeling.

I also found it kind of funny but very true to form that Hal shot instantly upon seeing Zod, honestly although I’m sure there were ulterior motives Zod was being perfectly polite at the time, maybe even welcoming? Not that it takes a full power Kryptonian more than a millisecond to kill a man, although I also can’t recall a time I’ve seen a Green Lantern take on a full power Kryptonian and succeed, look at Infinite Crisis, Superboy-Prime took out like 50. Although if any GL can it’s Hal and Kyle…

It should be noted that although not advertised anywhere this issue kind of ties into this weeks issue of Action Comics (not directly, just some shared settings/ characters, not spoiling it)

Rafa Sandoval is back! Nothing against Jack Herbert who did some rock solid work but Rafa is the guy I want on Hal and the Corps! Predictably the art in the issue is excellent, a particular highlight being the background in the planet Jexuul during the big fight. Speaking of which the battle scene (which I left for you guys to discover) is insanely well detailed and looks great.

Besides my one minor nitpick I found this issue to be an amazing start to the arc, which has essentially been in the works for like a year and a half, (since the first or second Suicide Squad Rebirth arc) this is some long game storytelling and man am I loving it (think I have every Zod appearance since 2016, since they’re all in books I love!) Get this book, get this series. Robert Venditti gets GL.