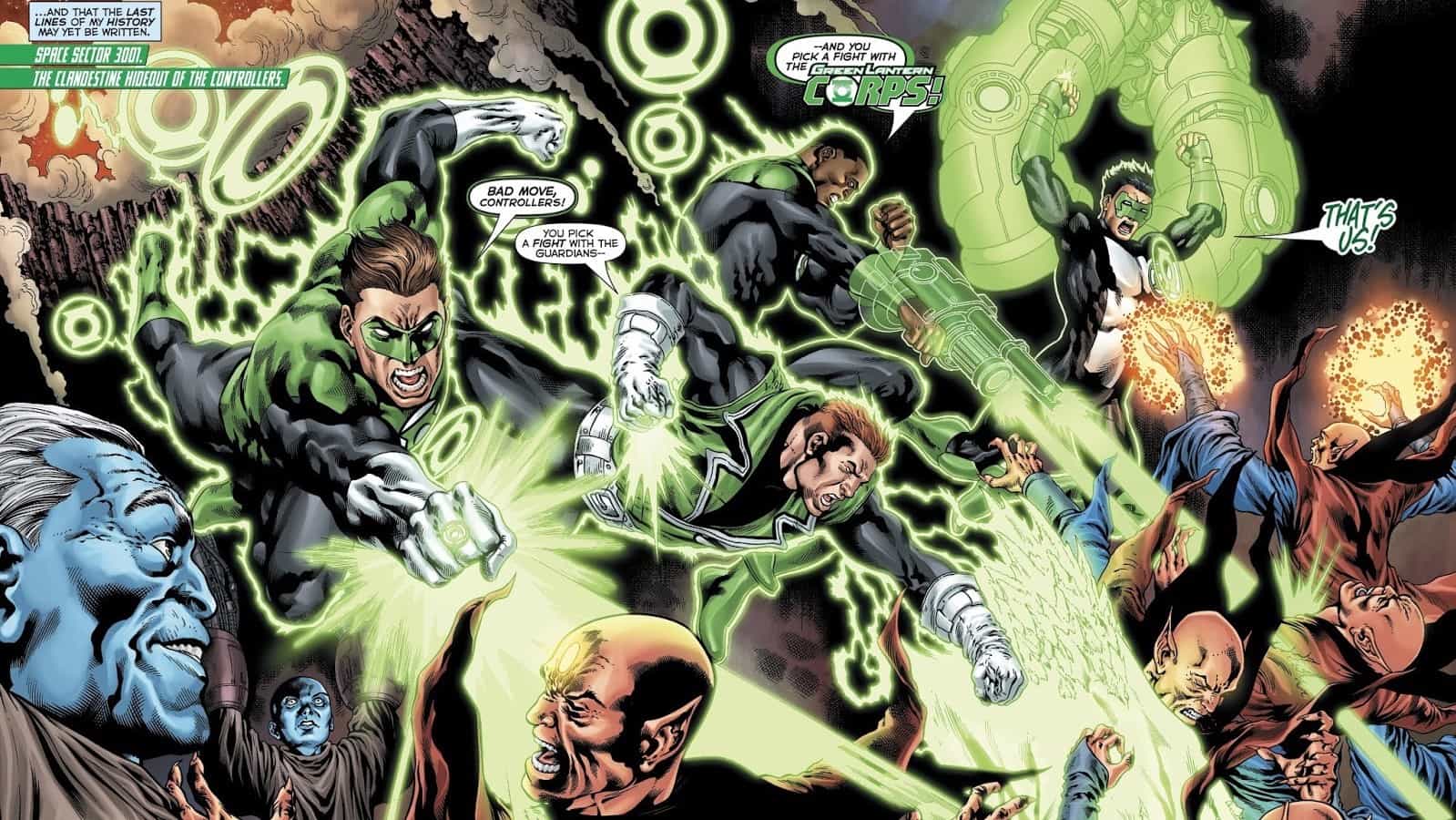 The Guardians have been kidnapped, after a bit of police work the four corpseman (thanks Robert Venditti for making my job even more fun with that nickname WOOO!) mounted a full scale assault on the Maltus Belt, the hideout of the evil Controllers! 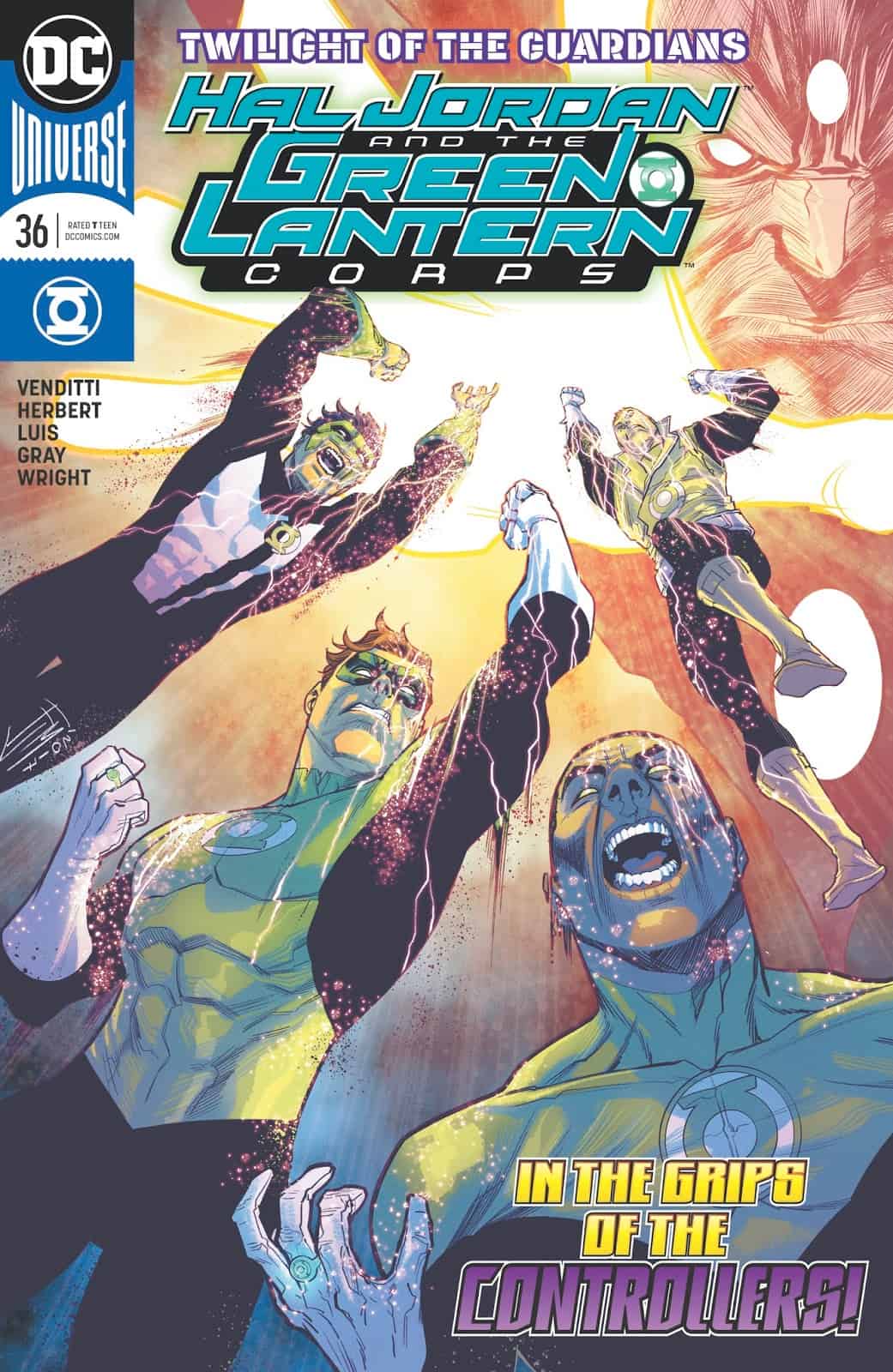 The Guardians of the Universe have been kidnapped by the evil Controllers, who are distantly related to the immortals via a common ancestry, with the goal of converting the relatively benevolent Guardians into fellow Controllers to further their eventual goal of total universal domination! (it’s good to have goals…) Of course, there are those out in the universe who might resist the evil immortal’s goals, the Green Lantern Corps!

I love the way they argue over who’s Ric Flair. Although they’re all wrong because I’m Rick Flair. WOOOO!

Following an investigation (2 issues back, amaaazing) and a full-blown assault from the 4 members of the Lantern Honor Guard (Hal, Guy, John, and Kyle) The Controllers are on the defensive, having gained 3 members to their limited race using genetic material harvested from and killing 3 of the Guardians!

We open with short monologue from Ganthet:

The longer I live, the more I ponder death
Not the final end, except to hope that it will arrive swiftly and peacefully
The true pondering is devoted to afterward
If I was a moonfly living my entire existence one single night, I wouldn’t ask much of my legacy
But I am Maltusian
I am a Guardian of the Universe
Only six of us remain, soon there may be fewer still
I sense my final end beckoning and am stricken with a haunting realization
In all my eons, with my vast accumulated knowledge
There is one thing of which I remain utterly ignorant
I have been called Ganthet
I have been called Guardian
But never have I been called Father
I feel… void
I hope now that the final end will not come so swiftly…

(Transcribed word for word, loved it)

The Lanterns storm the room the Controllers are holding the Guardians in a spectacular display of expertise and force, attacking with a fury that the immortals aren’t initially ready for. For a moment the battle looks to be over, suddenly the Controller Kellic reveals he was just toying with them and deploys his vibrational abilities, specifically intended to disrupt the Lantern’s abilities to make constructs. 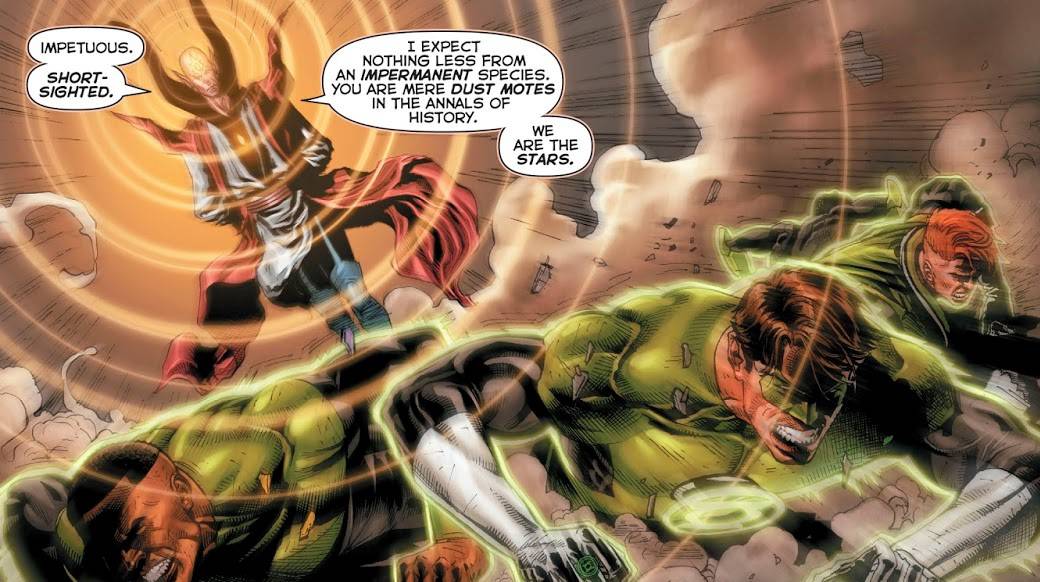 As the Lanterns recover bleeding from his assault he yells to harvest all the Guardians at once, he was just waiting for an audience. Ganthet begins to despair as his Lanterns are ground into the ground, suddenly in an act of teamwork that could be a book in itself the Lanterns band together so one of them can get a shot off, where does it land?! 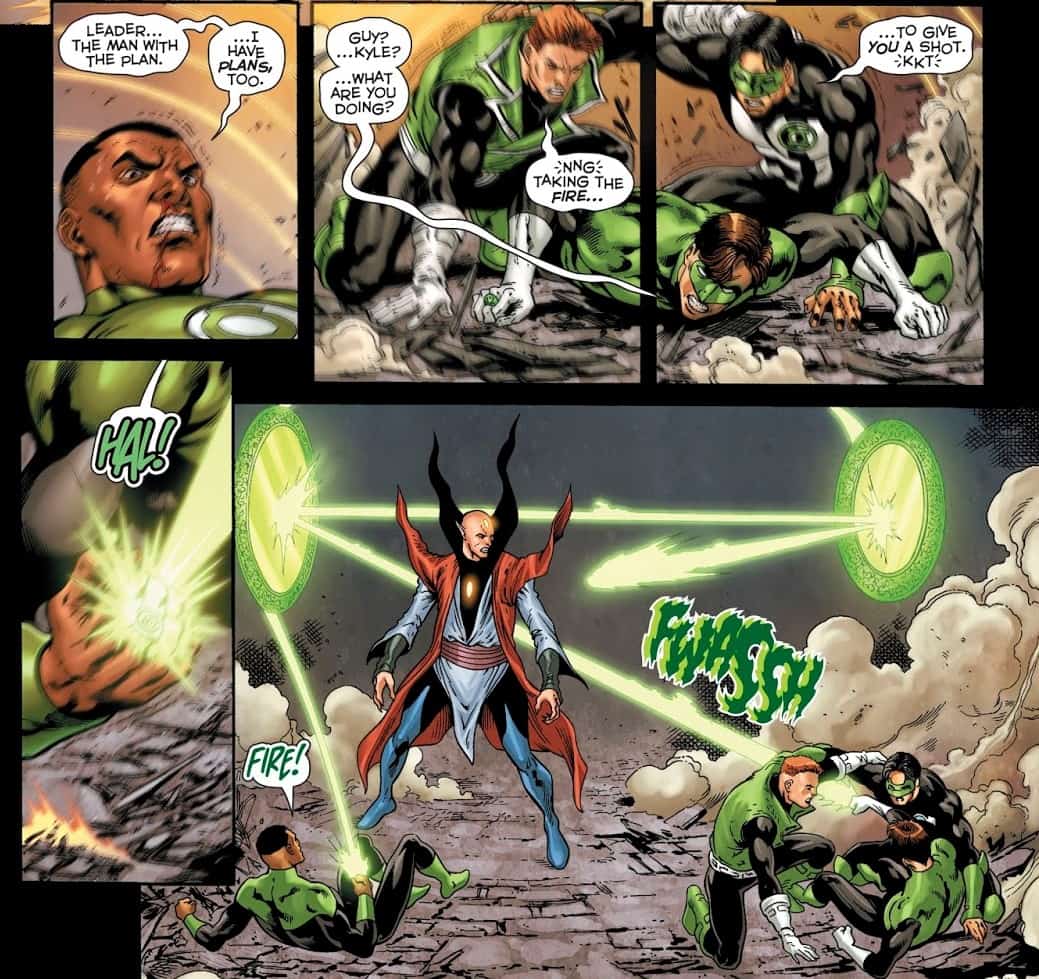 Find out for yourself, do yourself a favor and buy this book today! Seriously, there are a few books I insist people buy and this is one of them!

Plot:
This was the conclusion to an incredible arc for the Green Lanterns, Robert Venditti has been on fire! Highlighting great features of each of the Lanterns this issue definitely was the icing on the cake, really tying the 4 members of the Corps together and highlighting the amazing way they work as a team.

The opening monologue from Ganthet was seriously touching and amazing, which is why I included it verbatim. This issue featured some amazing inner monologue action from the tiny blue fella, I loved the background, especially when the panel also featured Guy smashing a Controller’s head in a car door!

A large part of this issue is the battle, which is drawn excellently, the end of this issue had some incredible visuals and was a ton of fun! I continue to be super entertained by all the constructs, particularly Guy’s.

I love this series, and this issue was amazing, this book has been consistently excellent, definitely one of the series everyone should be reading! I can’t wait, next issue, KNEEL BEFORE ZOD!!