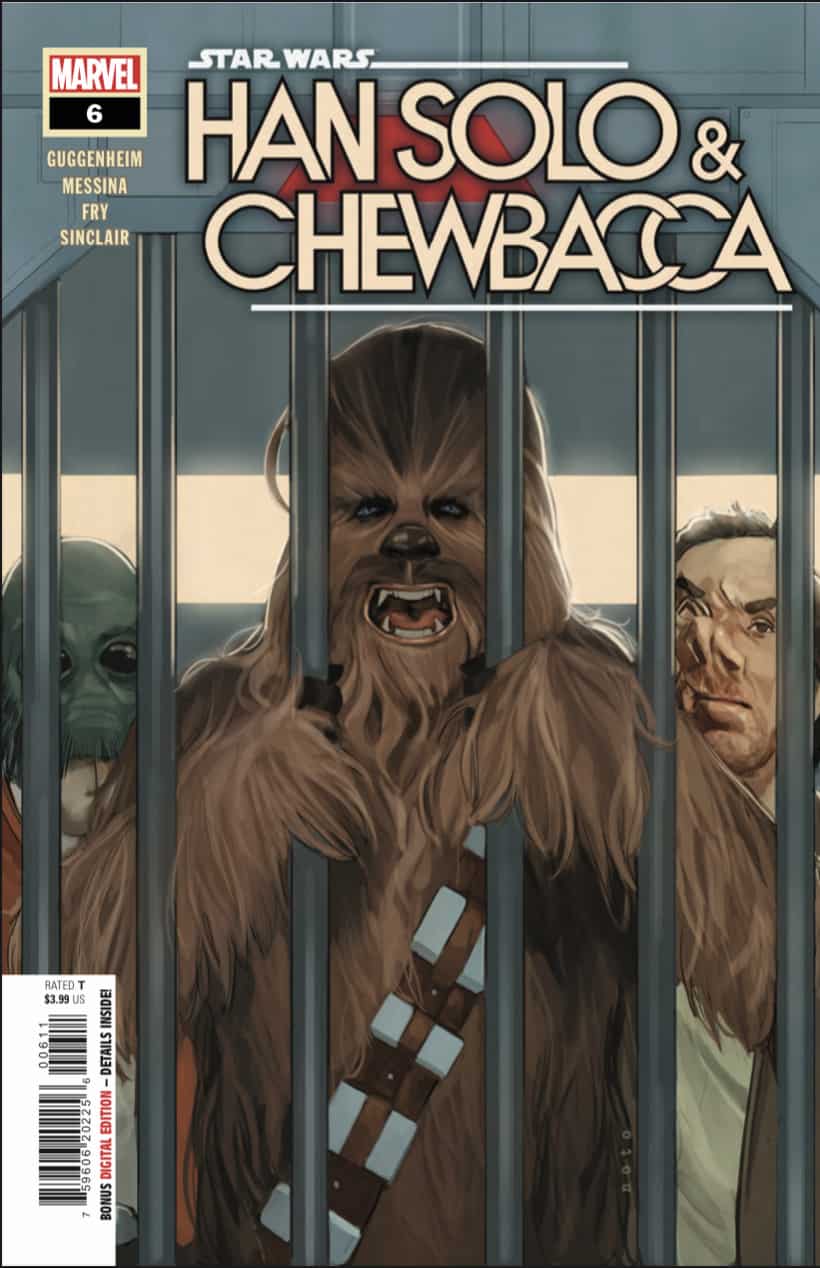 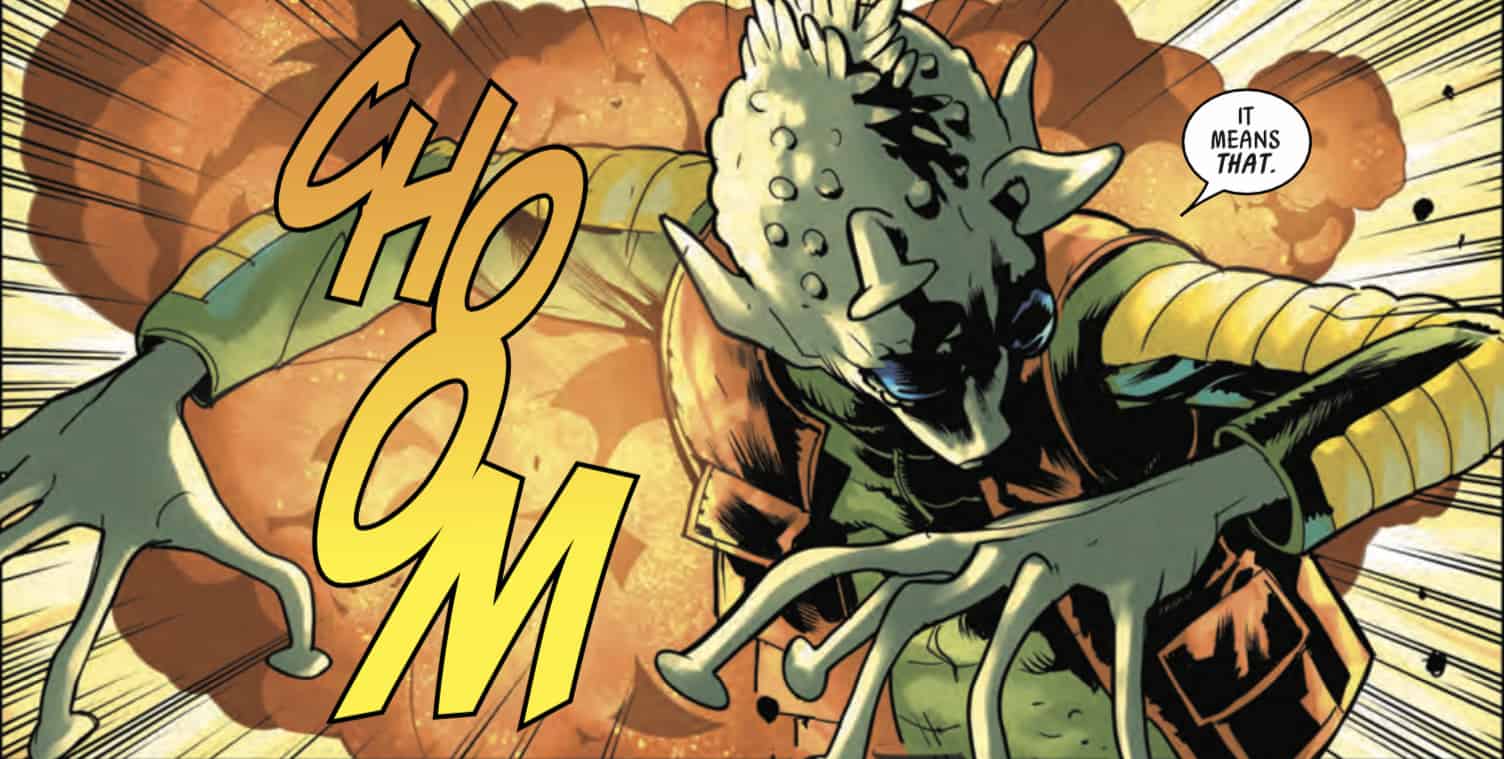 Everyone has betrayed Han Solo & Chewbacca. The man posing as Han’s father and Greedo have left Han for dead and Chewbacca in prison. As Greedo’s new crew attempts to complete their mission for Jabba the Hutt, Chewbacca and Maz Kanata plot a risky escape plan.

One of the major gripes about this series, after a few issues, was that Chewbacca seemed pushed to the background. That changed shortly afterward as Chewie got to have a massive fight with fellow Wookiee Black Krrsantan. Since then, his presence became more fitting of a character whose name is in the title. This issue takes it to the next level. The last issue implies that Han is dead. This is, of course, not true. This story takes place before the original Star Wars film, in which he is very much alive. However, for all intents and purposes, Han is temporarily out of the picture, leaving Chewbacca as the lone titular character to drive the story. He does a pretty good job at this. While in prison, he must fight every lowlife looking to make a name for themselves, something he takes in stride. At the same time, he faces a trial and forms a new alliance with a fellow inmate. Chewie gets a chance to do a lot of character interaction as well as fighting in this chapter, and the issue and series are stronger for it. 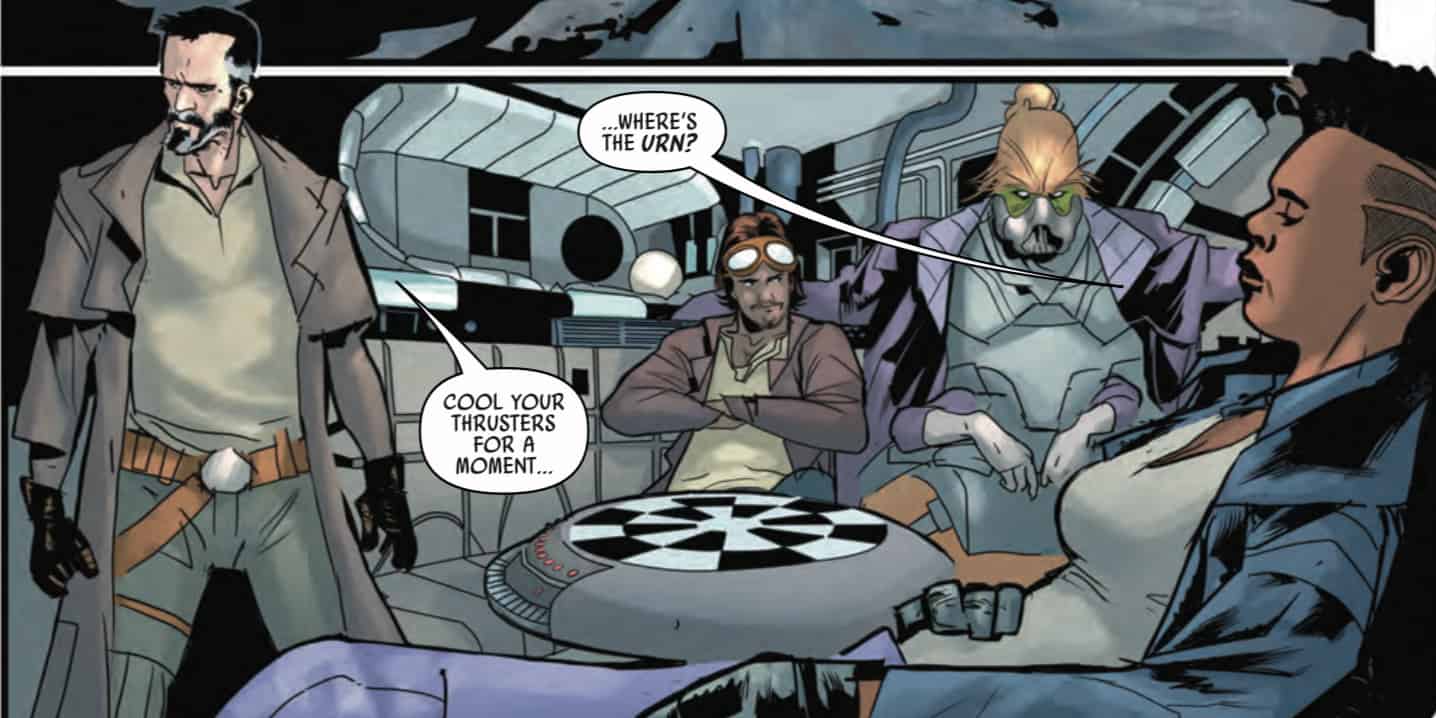 A common problem in any Star Wars media is new characters, especially a squad of them. It is tough to suddenly meet a new crew of characters who often seem indistinguishable from each other as two-dimensional characters. This issue sufferers from that. As much as a large chunk of the issue deals with Maz and Chewbacca, an equal amount of time is spent on Khel Tanna and her squad that is now teamed up with Greedo and the man who conned Han into thinking he was his father. The characters aren’t established well, and the action sort of rushed through any proper introduction in this or the issues that preceded it. It’s hard to really care about unfamiliar characters. Even the man posing as Han’s father is now basically a new character that is a stranger, now that his identity has been revealed. The saving grace in this chapter is Maz Kanata. She is a well-known character and had a well established background history with Han and Chewie via context in The Force Awakens. However, those connections haven’t been explored much in other media. Maz expressed a specific interest in Chewie in that film, which implies a past closeness between the two of the species. Meeting her in this prison seems so absurd and perfect at the same time. Maz acts as a well-placed anchor to tie the reader to the overall saga while introducing newer characters at the same time.

The art is top-notch in this issue, but the coloring is extremely rich. Colors blend with shading so naturally. Even space in the background looks so deep with detail and color. Smears of dirt on ship walls or green tree shapes in a foggy distance add a level of detail often reserved for some of Marvel’s best books. To see this kind of rich detail in a year-long mini-series is refreshing. Often side mini-series get a slightly lower quality art style, but “Star Wars” comics tend to reach for a dynamic impression in general. This issue is an exemplary piece of evidence in favor of that. It’s hard to determine how much impact this series has on the overall saga. A bunch of new characters on top of unfamiliar settings can sometimes push a “Star Wars” story into obscurity, and these series need to start making a bigger impact on Han and Chewie to give this series some narrative weight. Losing the façade of Han finding his father makes the series lose some of its impacts, but Greedo shooting Han could be a good way to recover that. If more meaning can come to viewers of the original confrontation between Greedo and Han in the original film because of this series itself, its impact on the saga will be more than enough to make this series worth the journey.

Chewie must attempt a daring escape with Maz Kanata. Meanwhile Khel leads her crew far away with Greedo. Han remains absent, for now.