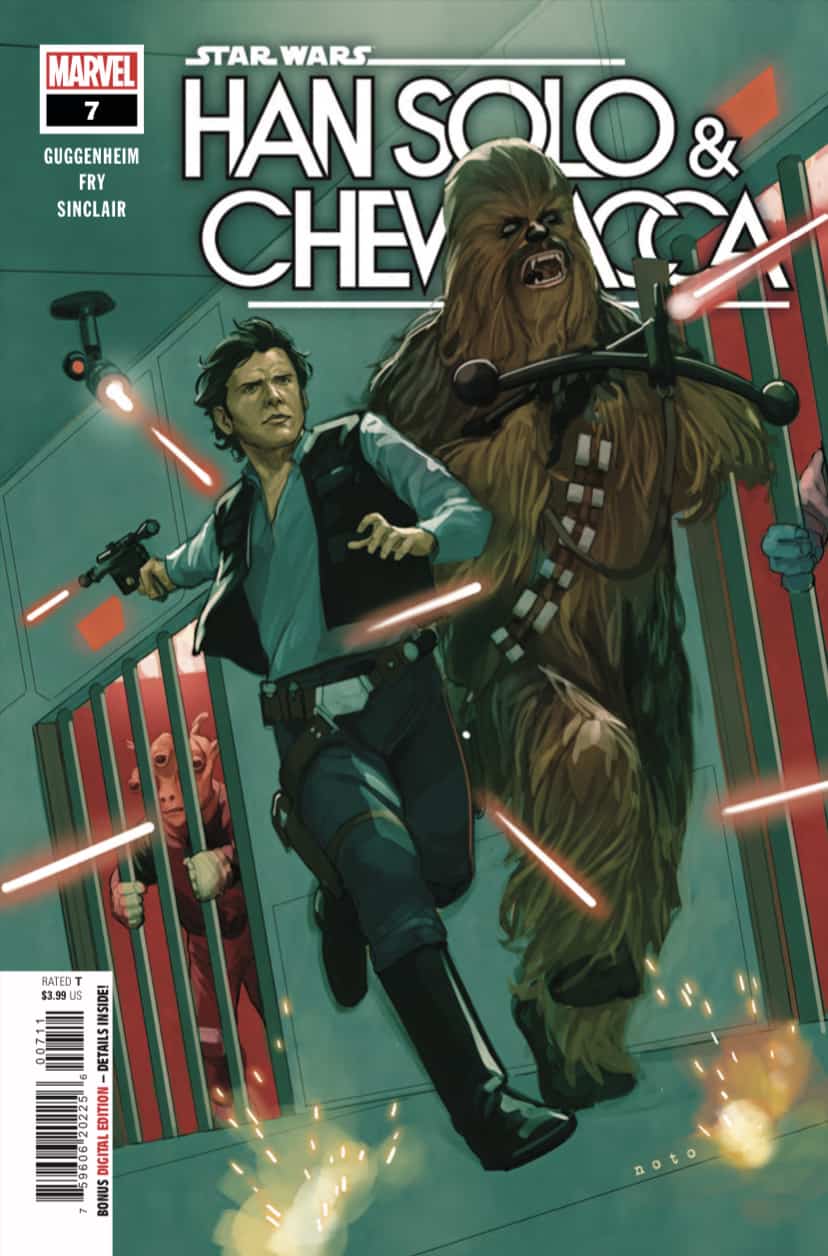 Greedo has shot Han Solo in cold blood and Chewbacca is on death row. It could not get worse for the smuggling duo. The familiar face of Maz Kanata is also in prison with Chewie. A not so familiar face of a fellow inmate holds the key to their freedom.

This series took a bit of a pause between this issue and the last. The last issue left Chewbacca in jail, and Han effectively dead. Readers had to wait a few extra weeks to find out what happens next. Surely Han couldn’t have been killed by Greedo. That’s not how the story goes. Well apparently Greedo shot first after all. Chewbacca surely will get out of prison, but not immediately. It was a nice touch, whether intended or not, to make the audience wait a little too. What makes this extra interesting it that there is a time shift in this issue. It takes place months later. Han is alive and stranded on an unknown planet, and Chewbacca is still in prison alongside Maz Kanata, the pirate queen. Add to the mix Phaedra, a young girl with a plan. This sets the scene for a pretty good escape story and a turning point for a new story arc to unfold.

Hands down the most charming thing about this issue was Dr. Evazan and Ponda Baba, the psychotics surgeon and his best friend/goon. These guys tend to show up unexpectedly all over Star Wars stories. They originally showed up in the cantina in Mos Eisley to threaten Luke Skywalker before Ben Kenobi interrupted. They have shown up in Doctor Aphra and even briefly appeared in Rogue One on Jedah. They also had tons of appearances in Legends novels and comics before the new canon. They are fan favorite thugs and clearly they get around. Well, it looks like the death sentences they had in twelve systems that they are so proud of have finally caught up with them because now they are to be executed. No fan favorite is going to go down like that, so of course Chewie and Maz’s escape ties into their own. Han has some time in this issue as well, but this chapter mostly focuses on the prison. 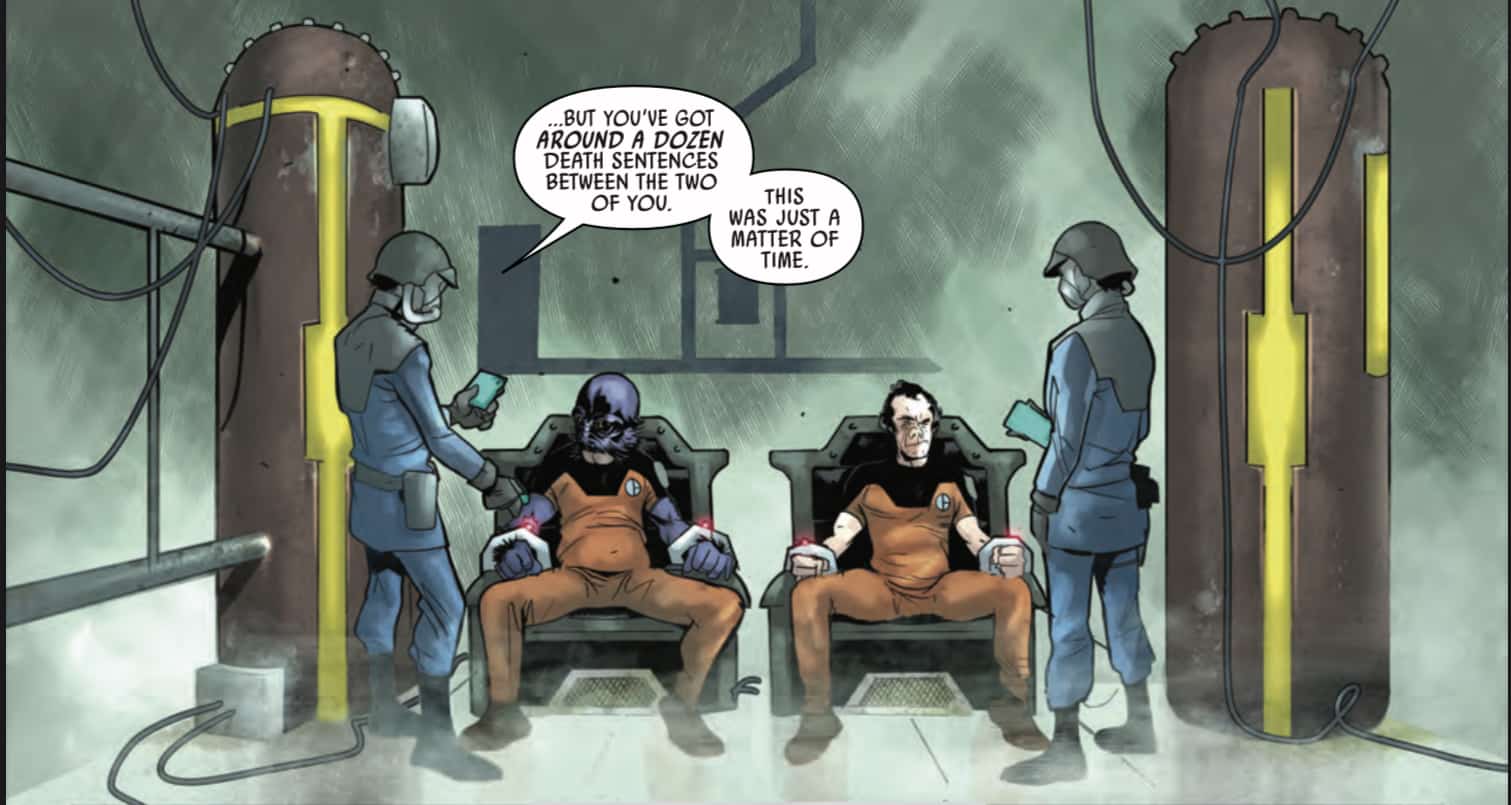 There is some but not much action in this issue, but it doesn’t suffer for it. It gives the chapter a chance to focus on the plan and its execution. It certainly moves the plot of the series at the end, but this issue, as well as the the last, sort of acted as a self contained shorty story in the middle of the larger series. It acts as a bridge to the first second half of the series. The art is very good and there is never any question what’s going on, even if things aren’t as they seem. There are separate moments in this issue where both Han and Chewie are shown as dead. In neither case were they actually dead, but the art is still convincing. Colors take a backseat to the art, using soft light colors instead of bright and bold. It almost felt like a “High Republic” comic in this sense. This allowed for the art to be bright and bold instead while colors supported it. 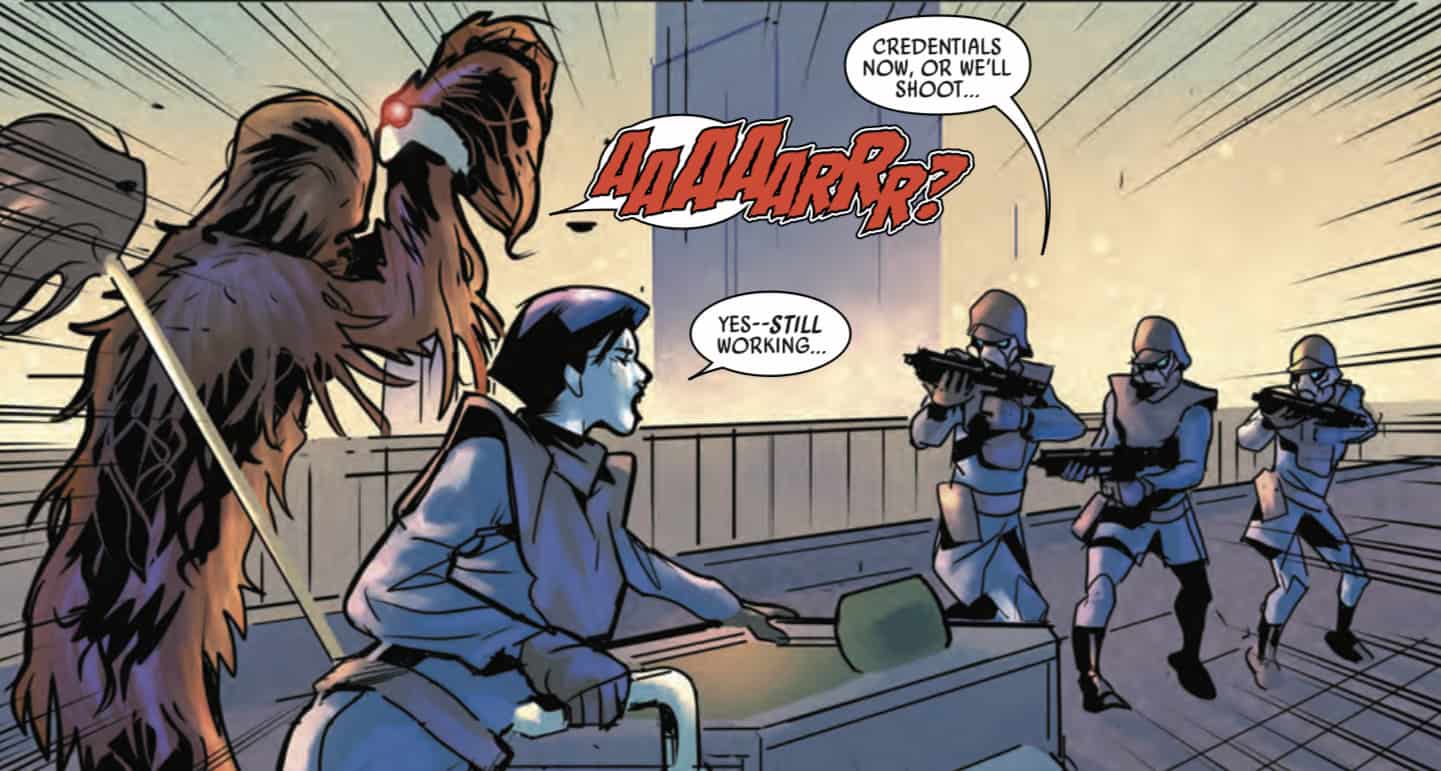 Hand and Chewbacca are back to old tricks. There is only one problem, The Millennium Falcon is still missing. I guess they will have to make someone tell them where she is.