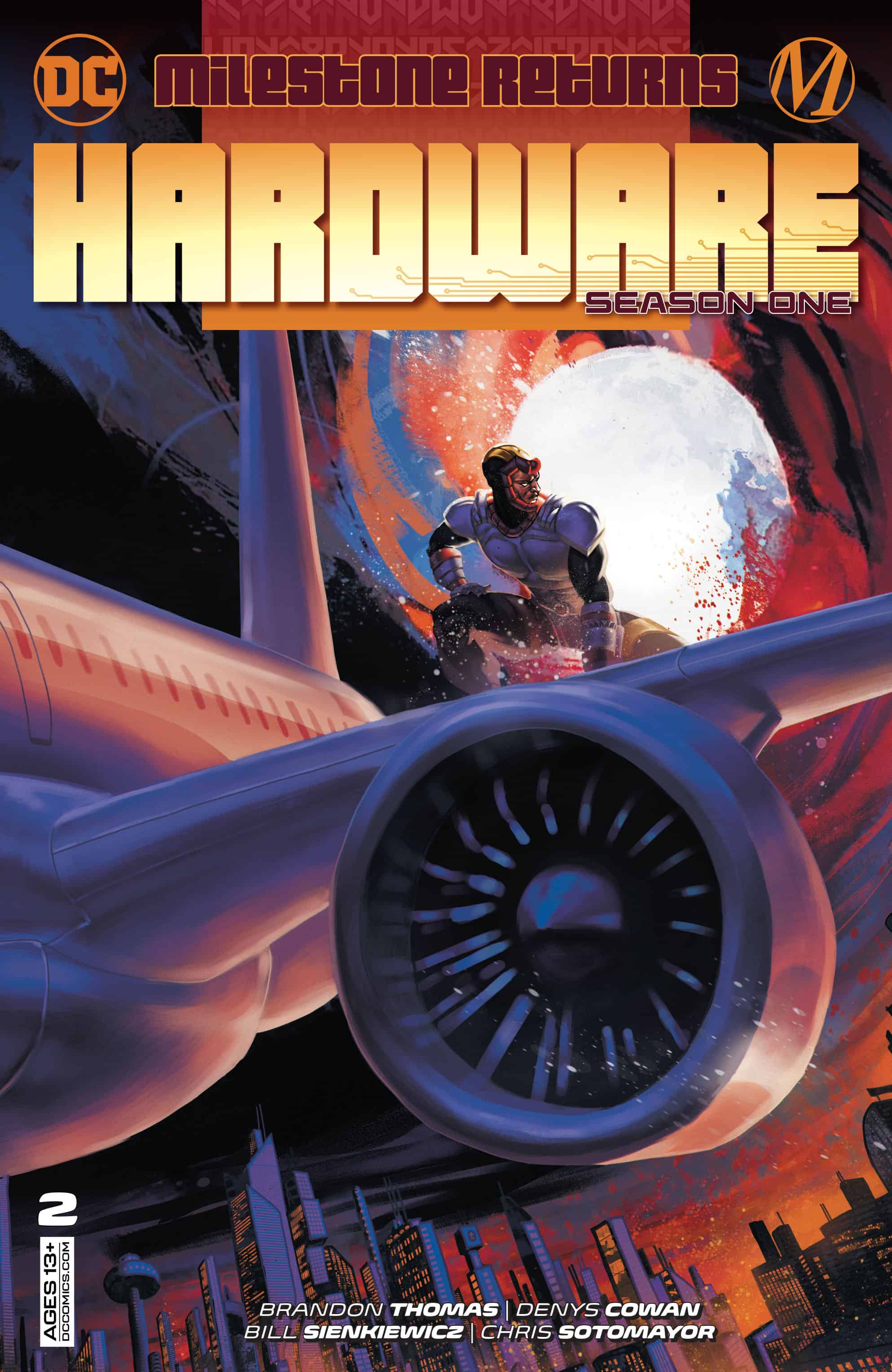 On the run and out of options, how will Curtis Metcalf clear his name of any involvement with the Big Bang and how will he take down the man who taught him everything that he knows? And the better question is, what lengths will he go to for justice? 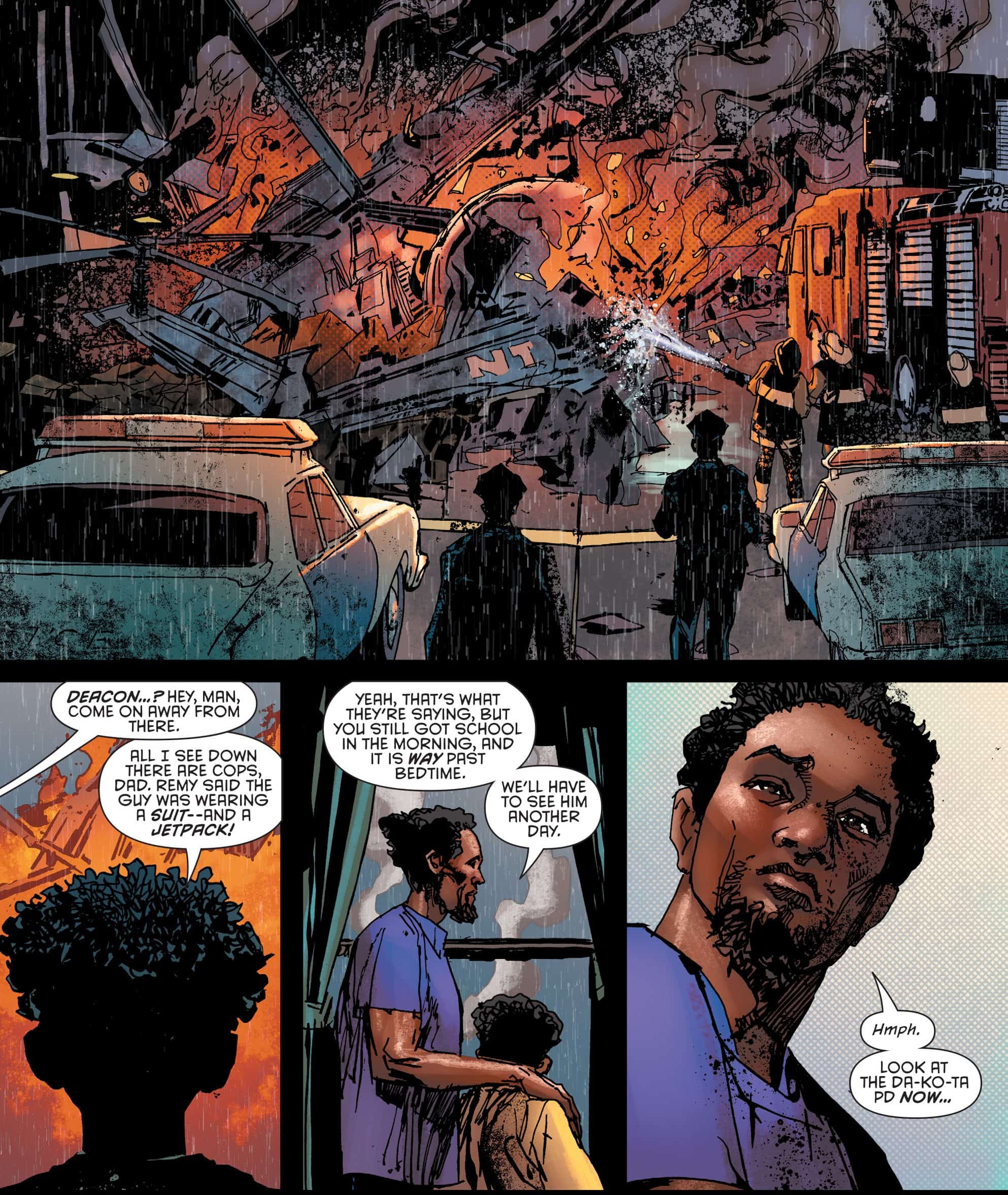 And he has every right to be; After his former mentor, Edwin Alva, causes him to be implicated as the cause of the Big Bang, Hardware goes on the run and fights against cops to clear his name. While most heroes tend to stay in their home towns and defend them, this issue will leave readers wondering what Metcalf is going to do next as the heat on him is so intense that he has to flee entirely. Usually second issues are the real test of whether or not a story will have legs to continue on and the creative team on this book have absolutely managed to draw me into the story.

Thomas has found a way to make me invested in Hardware in a way that I hadn’t been prior to the first issue of this new series. The way that he writes the dynamic between Curtis and Alva captures the feel of their interactions from the 90s with the feel of today. Alva postures like he’s a man of the people, someone that cares about the fact that the police are falsely accusing Curtis, a white savior of sorts, and even some of his employees can see through the veneer. Hardware himself is a man of singular focus and conviction. He knows that he has a huge target on his back, but he’s not willing to back down from the fight that Alva started, even going so far as to bomb his office in an attempt to regain some lost research. 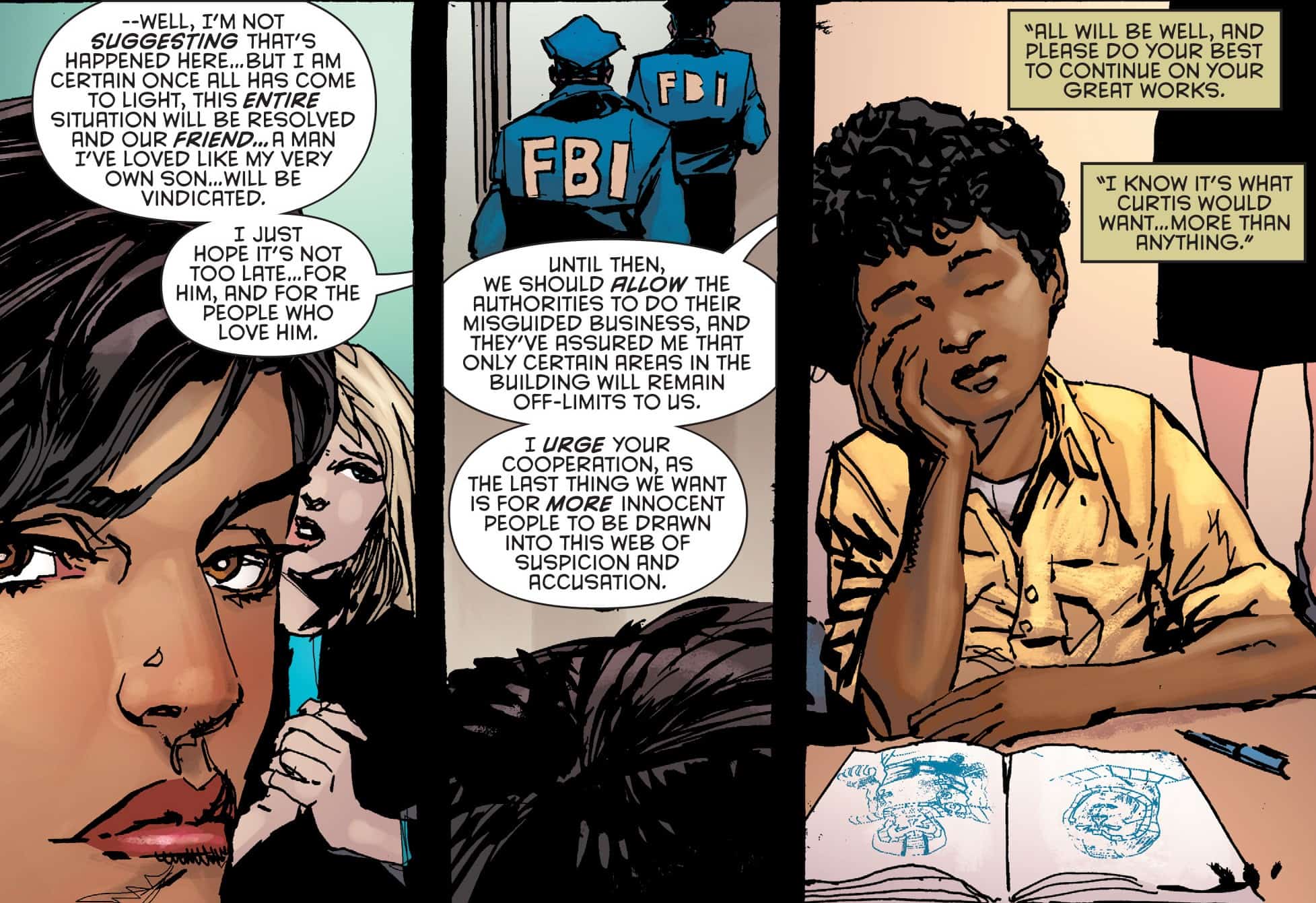 But the main thing that drew me into the story was a subplot where a little black kid is called out by his white teacher and given detention for drawing a picture of Hardware during class. It strikes a nerve and shows just how much black kids are stigmatized for their interests and how willing those above them are to stymie their education because the kids have views that don’t align with their own. The kid saw Hardware as a hero for trying to absolve himself for a crime, but his teacher, so caught up in her fear and what the “authorities” have told her and everyone else, paved the road for the kid to get caught in the crossfire between the police and Hardware because he had to be picked up late.

Denys Cowan’s art stuns on every single page that he draws. His line work has always been some of the best in comics, but he’s in absolute peak form right now. While the last issue was nothing but non-stop action from beginning to end, this issue slows things down and allows for Cowan to show just how good he is at drawing scenes of calmness and subterfuge. When Curtis sneaks into Alva industries, he’s drawn with a look of desperation and subtlety that help play up how dire the situation is for him and one of his fellow coworkers, Ms. Evans, who finds herself on his side of things. The same goes for the school scenes where the kid looks dour at the fact that he’s a fan of superheroes and everyone makes fun of him for it, often being drawn with forlorn expressions. 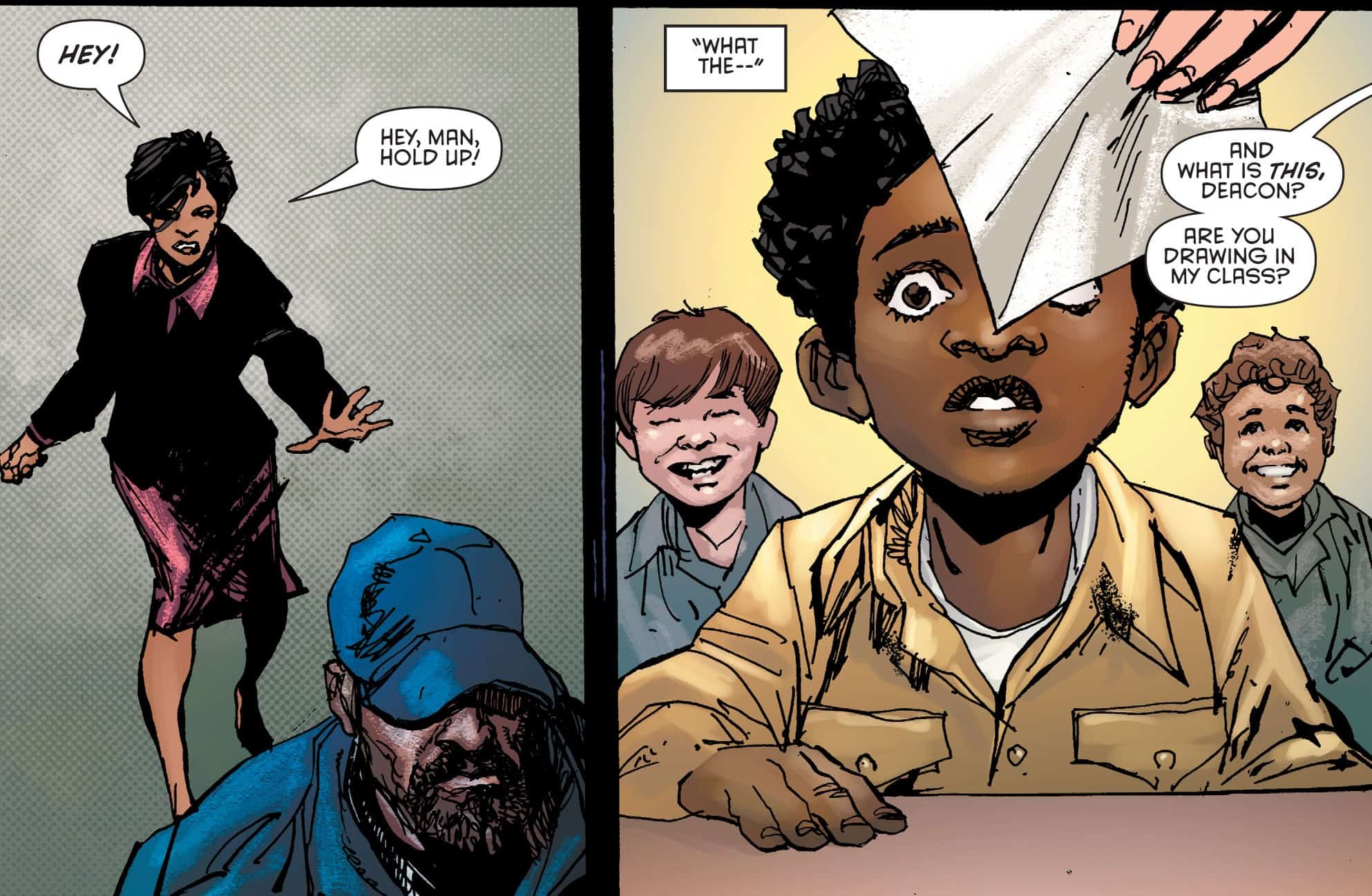 On the opposite side of the coin, however, when the action does kick off, it is still heavily dynamic, but this time Curtis is on the back foot when his plan goes awry. Cowan portrays his further desperation with a wide stance run, tense facial expressions and absolute anguish when the kid from the B-story gets hurt in the fight. The accident itself looks terrifying with the amount of force that Cowan draws Hardware with as he collides with the car and they both crash into a building, Hardware through the glass and the car into the brick of the building.

Bill Sienkiewicz inks and Chris Sotomayor’s colors undoubtedly make the art for this issue even more stunning. Sienkiewicz is absolutely a master at his crafts, whether they be art or simply inking and that doesn’t change here. He makes sure to give everything a proper weight, depth and feel, ensuring that the shadows are as dark and gritty as possible and the lines themselves are thick, allowing the colors to pop. This helps with the much darker tone of this series in comparison to other Dakota-verse titles like Static and Icon and Rocket, both of whom have brighter, more optimistic styles to them. 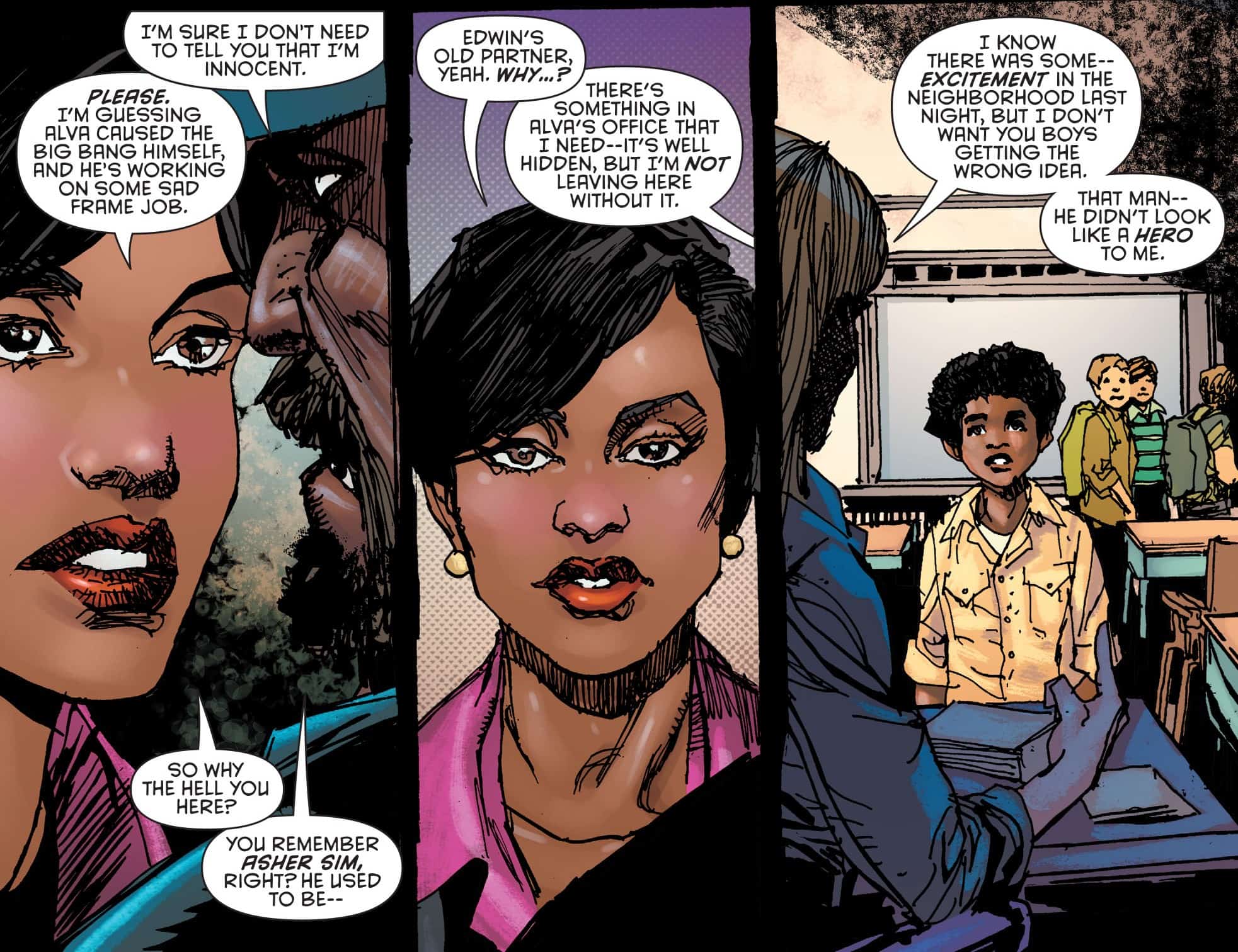 Where Cowan and Sienkiewicz throw the ball up, Sotomayor is the one who sinks it for the alley-oop as his colors give the book all of the emotion that makes it great. The scenes with Curtis in Alva industries are given a blue tint, indicating that his former workplace no longer welcomes him and he too wears blue as he tries to not draw any attention for himself, marking his own emotional state when returning. This is contrasted by the scenes of the kid in school as he wears a yellow shirt which could signal a little bit of positivity as he looks favorably upon Hardware. However, both of these themes collide in the ensuing accident as the backgrounds are coated with a dark red shade, an omen that something bad is going to happen to someone and lo and behold, all thanks to Sotomayor and their excellent eye for detail.

Major credit also has to be given to letterer, Rob Leigh, who does an amazing job choosing various types of balloons for words, thoughts and technology itself, as well as the various sound effects that litter the book. I will always been a fan of sound effects as they capture what a scene well…sounds like, they make for a fun thing to place between moments and help to capture the impact of certain things, like the “SMASHes” and “KREEESHes” of impacts, but also the awfulness of a cacophony of “HAHA!s”

Brandon Thomas, Denys Cowan, Bill Sienkiewicz, Chris Sotomayor and Rob Leigh show some real promise with this story! In only two issues, I’m already anticipating what comes next, especially as Hardware is shaping up to be one of the best things to come out of the new Milestone Universe.