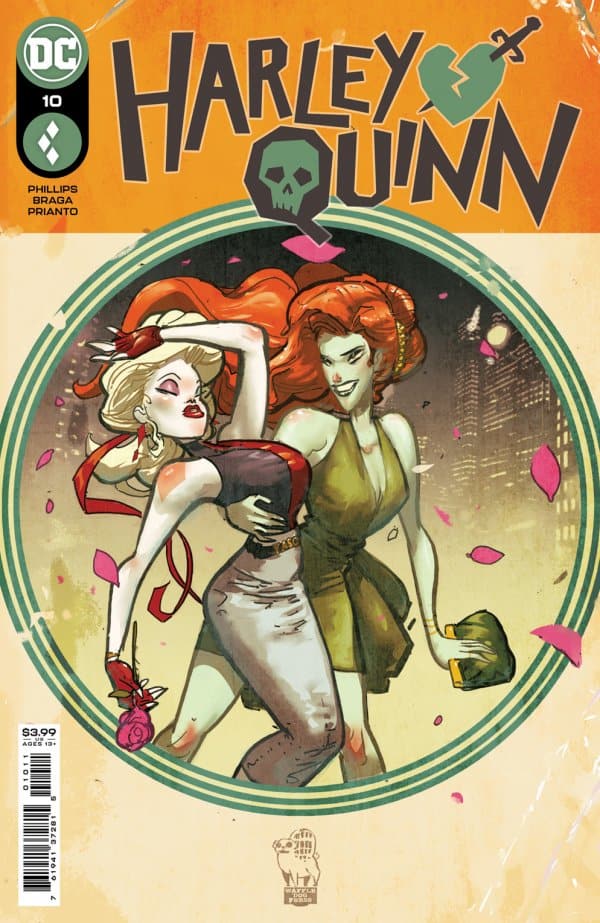 You know those real cheesy rom-coms where two unlikely lovebirds lean in for the same book and knock heads in the poetry section of the school library and fall madly in love? Well, this story is nothing like that. For starters, Kevin met his new muse in the middle of Scarecrow attacking Gotham (how’s that for a meet-cute?). And second, despite Harley planning the most perfect and romantic date night with Ivy, it seems like she might have something else on her mind. Love is in the air—errr, wait…that might be toxic gas…this is Gotham!

This is one of the most visually gorgeous and emotionally moving comic issues you can read, and both Stephanie Phillips and Laura Braga are putting all their best tools on good use. With Harley’s internal monologue taking central stage, and the double-date scenario with Kevin and Sam showcasing the conflict of the issue, the creatives here manage to pull you into Harley’s psychological place and give you full scope of her conflict with Ivy, while at the same time being absolutely hilarious and enjoyable in every step of the way. The execution is just priceless, and the lines and colors manage to be sexy, fun, ridiculous, sappy, intense, passionate, every bit of the way.

The “but” that you might have seen coming is that, while the execution is more than great (even if the storyline itself is kind of rushed), the result of it (Harley and Ivy taking some sort of – highly dramatic, or dramatized here – break) puts us in the position of renouncing to the happy romance of one of the main queer couples of DC Comics (who also have been implied to be polyamorous for the longest while), at least for now, and without a timeline on it. And, while the issue is effectively convincing me of the differences between them (well, with the exception of being clearly shown from the point of view of Harley, and Ivy as a result having less agency), it still makes me wonder of the many different ways they could manage this without it feeling so dramatic or nodding so much to the fans in a “you’re gonna have to wait for a while for Ivy and Harley to be together again on the page”. And how those ways would still feel very organic and respectful with their different places in life. Much like that dramatic cover by Riley Rossmo, I’m fainting at the idea of Harley and Ivy not being romantic badasses in a comic like, soon. But it’s open-ended enough that I’m gonna reserve a bit of my suspicious mind and applaud the brilliant execution of the issue. For now.

An emotive issue filled with character depth and the most gorgeous, playful art. Let's see where this goes and hope that at the end isn't a long-lived situation.