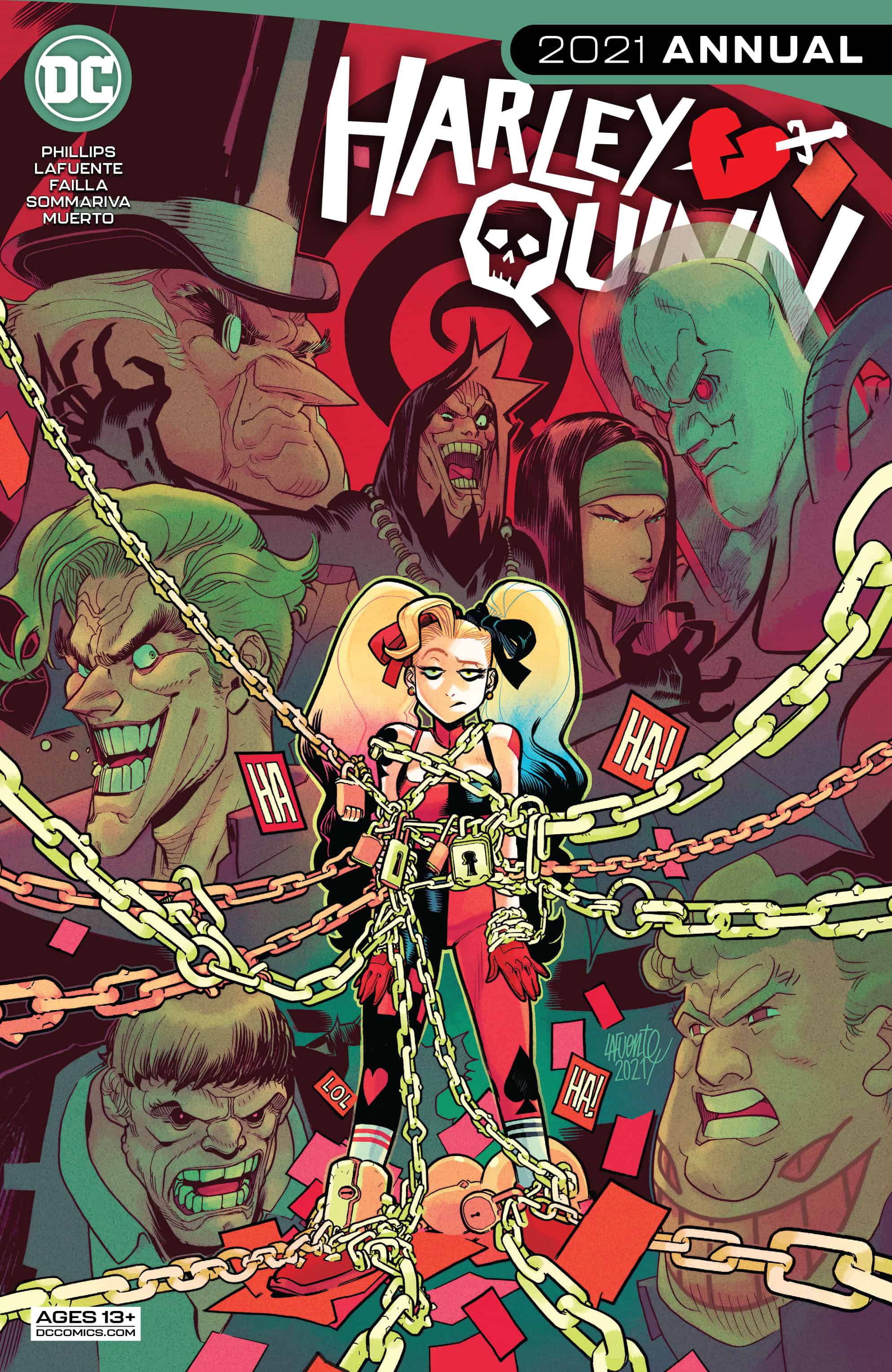 “Kevin here! You know, Harley’s sidekick, and your favorite new character? I know Harley usually does these solicits, but she’s a little tied up at the moment. Like, literally. See, there’s a new villain in Gotham calling himself Keepsake, and you know how Gotham villains are: definite psychological issues."

Even if I’m certainly not feeling his motivations and backstory, I can appreciate why Keepsake makes a case for a good villain for Harley: he’s mediocre, and dangerous in his mediocrity. Creepy, chauvinist, and capable of great harm by the way he’s entitled to think he knows how the world works. He reminds me of a lot of toxic comic fans. He’s also convinced that Harley must be a villain and that all the character growth she has gone through is b-shit and doesn’t fit the idealized, bad girl, version, he has formed of her. And his arc in this story works greatly to show how secure Harley is in her new independence and the shift she has shown in her actions, how she’s really trying to make the world better now.

There’s also a ton of great monologue by Kevin’s internal thoughts about Harley and her place in this complex anti-hero-once-villain role, and how that works within the issue. But I feel most of that barely gets realized with the actual dialogue and characters. As Keepsake feels so very clearly like a narrative device, and the come-and-go of Greatest Gotham Villains during the issue like a showcase,  I’m not sure I have learnt a lot more (or, for some of them, anything at all) about these characters when I arrive at the last page. 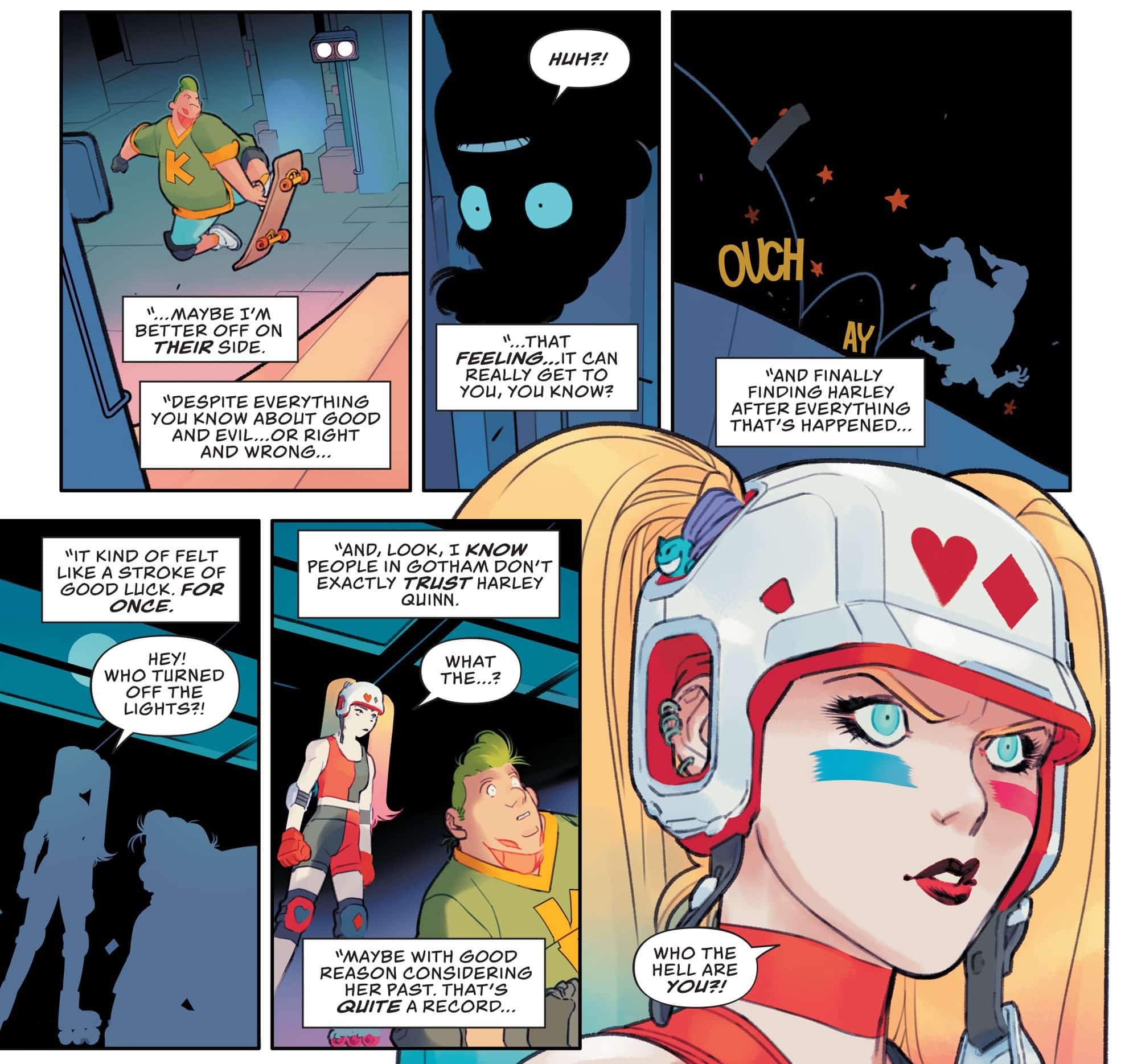 And then my mixed feelings get amplified with the art. Most panels that Harley is in are great, as she’s the best when she’s exaggeratedly herself. Same for Kevin, and not a bad fit for Solomon Grundy. And the coloring and big FX lettering panels are fantastic. The issue exudes fun, careless cartooning when it gets centered on its main characters.

But every secondary character is a caricature to the greatest of extents, and there arrives a point where I’m tired of first planes of Penguin’s nose, Harvey Dent’s so vastly overemphasized two faces, and, well, Cheshire’s breasts. And the fight scenes see women with waists that are smaller than their legs far too often, and angry faces of scary dudes that all look kind of the same. Overall, the art was a mixed bag of “fun and invigorating” and “this is painful to look at”. And, to be fair, I feel like a lot of it is just a lot of artists collaborating in a way that hasn’t made a really compact final product.

I have to say I really like how this issue framed Kevin and Keepsake against each other as two people with similar background and such a different growth, and the scene of Harley, Solomon and Kevin hugging is one of the most heartfelt and rewarding scenes of this run. But I’m not sure if that can compensate for the fact that this issue had a lot of lack of direction, surprise or punch in most of its scenes, and that Keepsake is mostly defined as, well, not Kevin. But, I am loving this run very much overall, so, while this issue was a bit of a pothole on the road for me, I wait for Harley Quinn #7 and what comes of all of this eagerly.

A lot of great ideas but kind of directionless (or at least stumbling in its direction) issue, and Keepsake doesn't seem particularly scary, compelling or interesting for a villain.