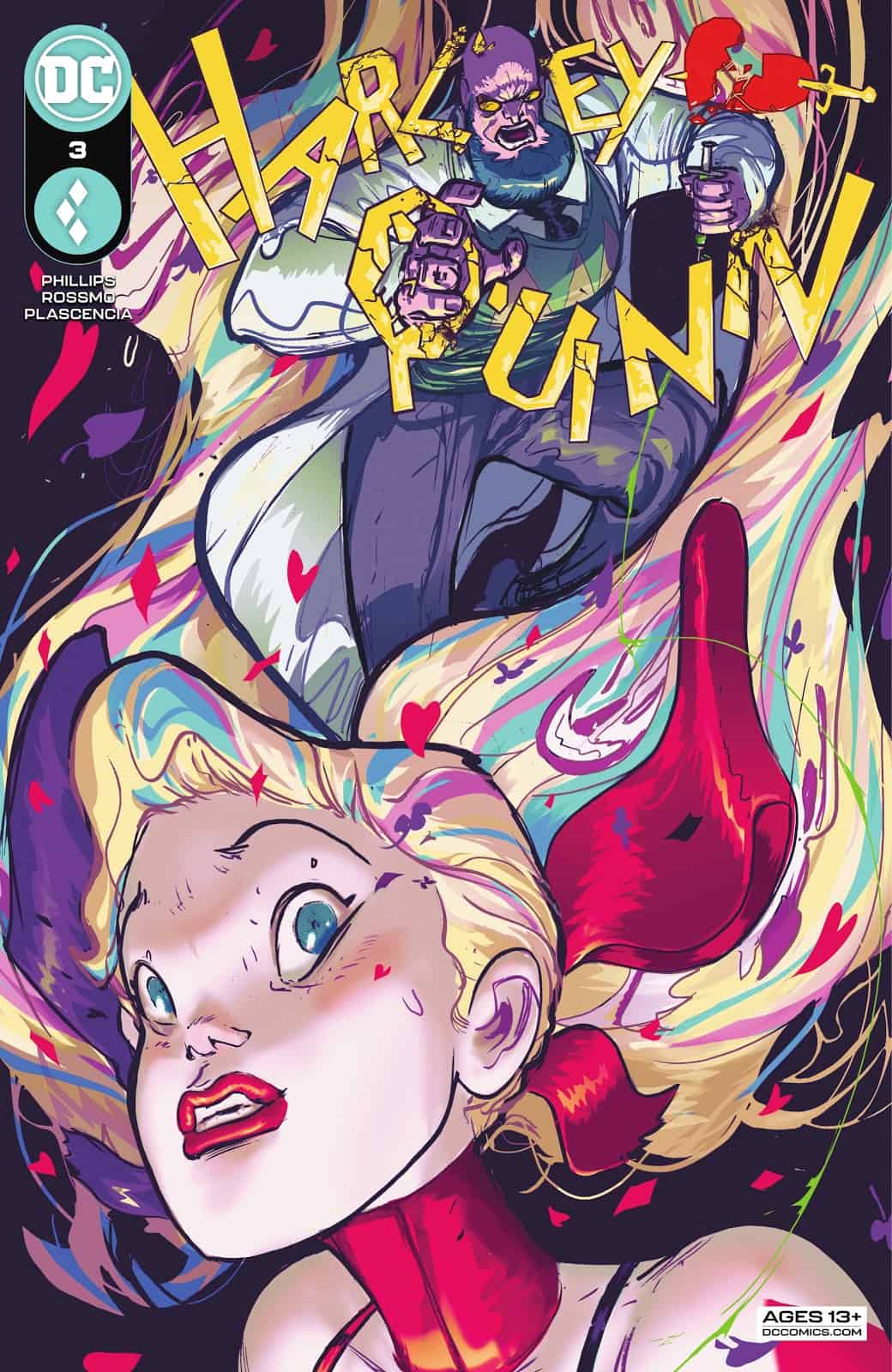 Harley Quinn here, still narrating my solicit text! My war of wellness with Hugo Strange kicks into high gear this issue, and things are gonna get ugly. Hugo is about to send his right-hand man-child Lockwood, Arkham Asylum’s most sadistic guard, after Kevin and me at our first support group meeting. Folks, some things in this world are sacred, and I am not gonna stand for this. Hugo Strange never picked a fight with someone like me before, and he’s not going to like the results. Buy this issue-it’s a real gem!

Now that we are three issues into this brand new Harley Quinn series, we can get a full taste of what this creative team is bringing to the iconic character and it’s safe to say that this will undoubtedly be a memorable series. 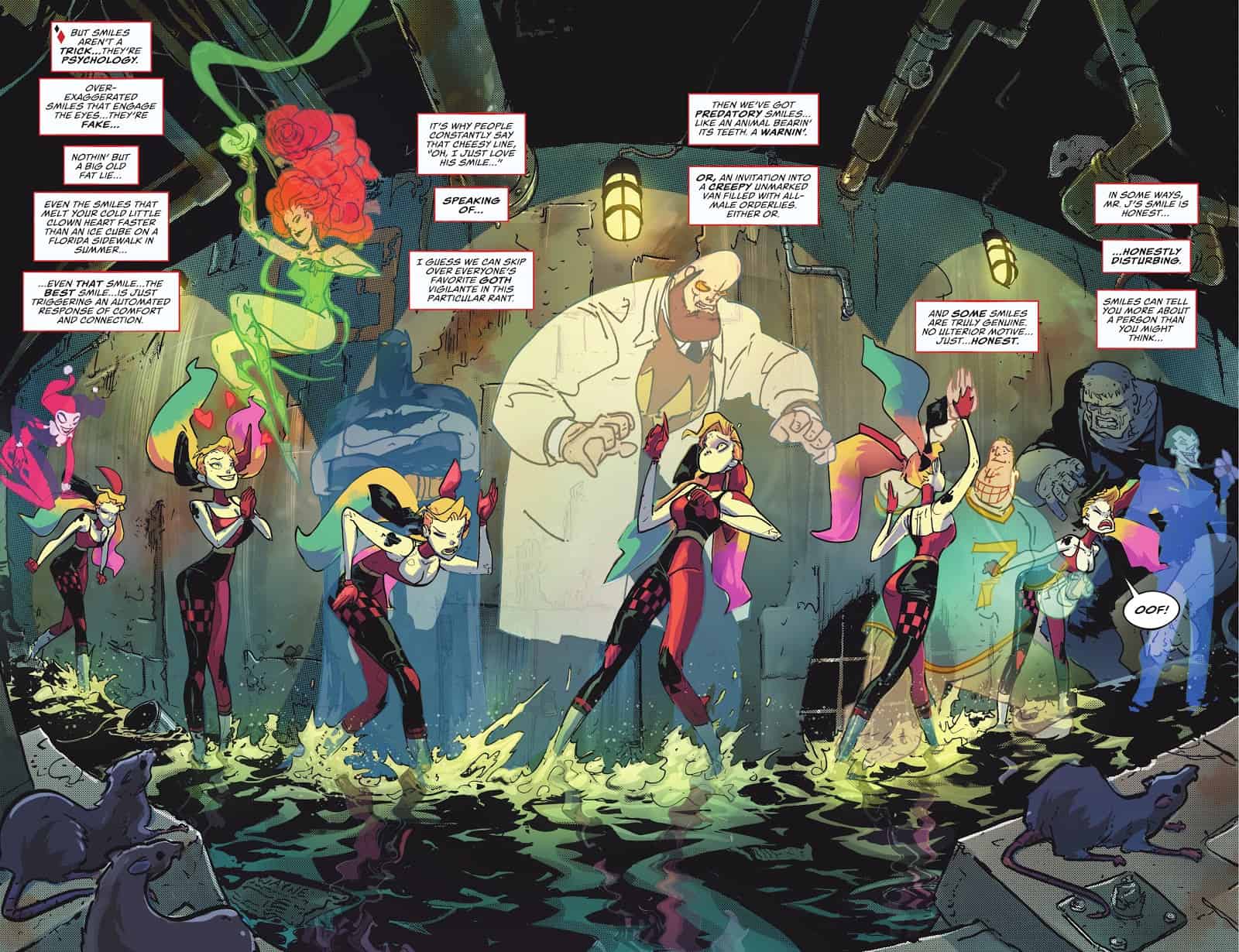 We have Harley herself finding a role in Gotham following the Joker War as Hugo Strange is enlisted to help the city pick up the pieces with a new rehabilitation program that Harley absolutely isn’t buying for a second. With an approach that writer Stephanie Phillips has favored even during her brief time with the character in the Future State event, Harley uses her degrees in psychology and experience as an unfiltered badass to find a new path forward however complicated it might get.

This issue really focuses in on Harley’s penchant for understanding the psyche of even the most deranged of Gotham’s citizens. This sets the character up for an interesting examination of the after effects of the Joker War but it also puts her in a position that warrants a significant reduction in the wild antics the character has been known for. This double edged sword is felt more than ever in Harley Quinn #3 as we see her try to hold what is essentially a group therapy session that predictably spirals out of control, leaving her more reactive instead of an inducer of chaos.

It’s incredible to see this vision of Harley come to life with Rossmo’s uniquely unmistakable artwork and Phillips has tapped into an element of the character that doesn’t really get the attention it always should. But combined, there is a clash of appeal that is tough to reconcile. The artwork is much more abstract and has a chaotic nature that fits the character well, but the emphasis on Harley’s intellect feels like it is still trying to find it’s prominence amidst such vivid depictions rather than working alongside it. I love Rossmo’s visuals of Gotham, its inhabitants and even of Harley herself, and I also love Phillip’s approach to the character who is finding her identity specifically within Gotham, but I’m not sure if I’m sold on the harmony between everyone just yet. Even then, there is no denying that when this creative team finds their stride they tap into something truly exciting. It’s just not happening on every page just yet for me.

The heart of this story is the psychological analysis of criminality in Gotham, what it can spur on and how someone like Harley fits into everything. With Hugo Strange’s rather dark mission under the guise of betterment we are able to find more than enough depth to contrast Harley’s insightful thinking and general worldview, and though I might complain, there are some wacky moments that feel right in line with what we’ve come to expect from a Harley Quinn series. It’s a good comic, yes. But despite being three issues in, I can’t help but feel we just need to spend a little more time with this creative team and what they are attempting to pull off with the character to get a more definitive understanding.

All of the fundamental pieces are there, including Plascencia’s engaging color palette and Andworld’s strong letters, but hopefully they will all start to work more cooperatively as the story continues, giving us a more cohesive direction that fans can get behind. The potential is there and the creative team has proven that, now let’s see if it can all come together.

Emphasizing the psychological analysis of criminality in Gotham and how someone like Harley fits into the bigger picture, Harley Quinn #3 does feature some great moments despite the series still not quite hitting its stride.