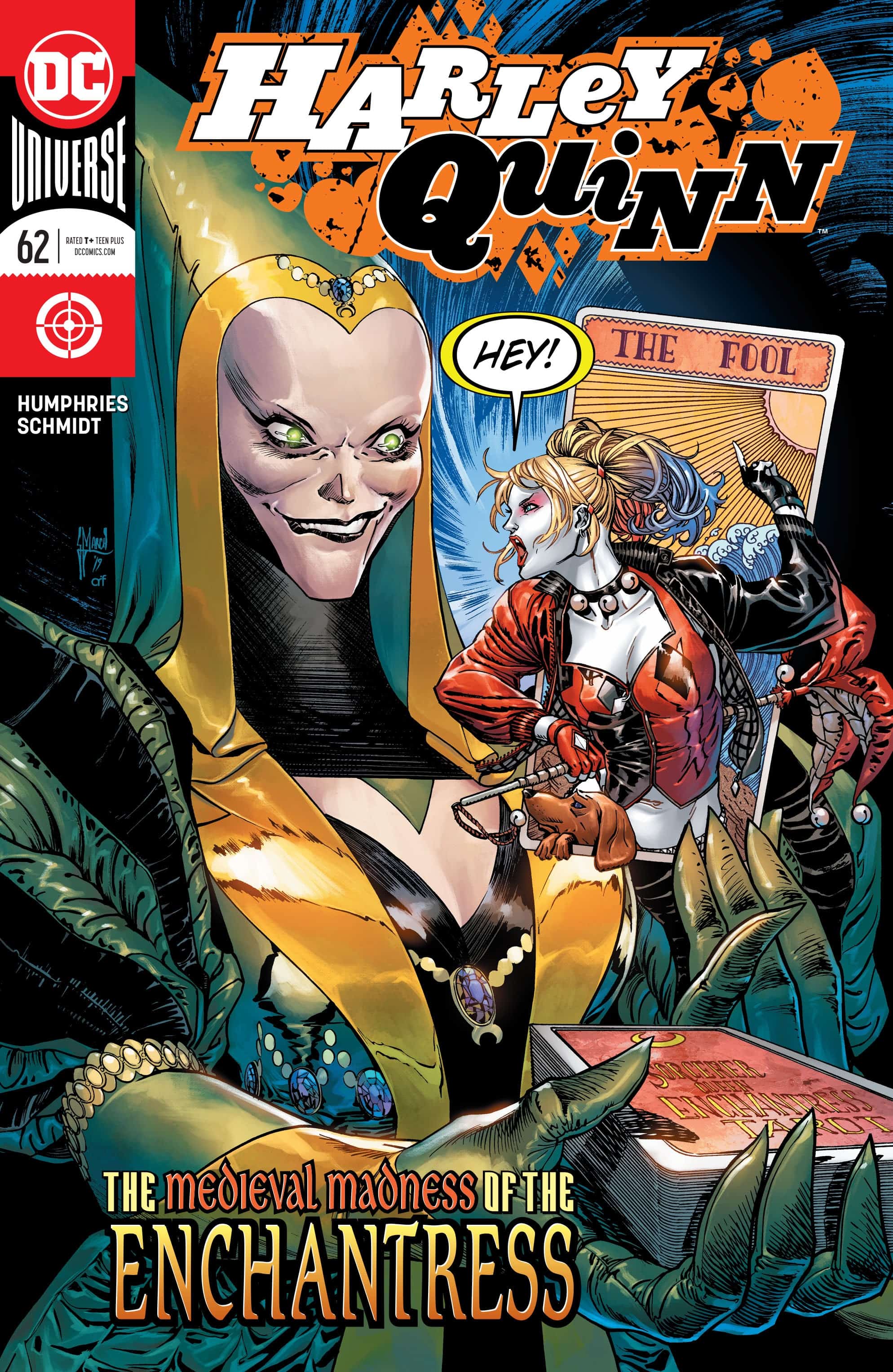 Harley’s life has been turned upside down, and her best friends have turned against her. Now, trapped in a magically changed Gotham City, Harley Quinn is put on trial to do something she’s never been capable of: prove her sanity—or die!

The Trials of Harley Quinn keep coming with part two of the “Role Players” arc that sees Gotham transformed into a Dungeons and Dragons epic fantasy realm. Following last issue’s fun introduction, issue #62 mixes some rather complex emotions into the fray to deliver yet another great story! 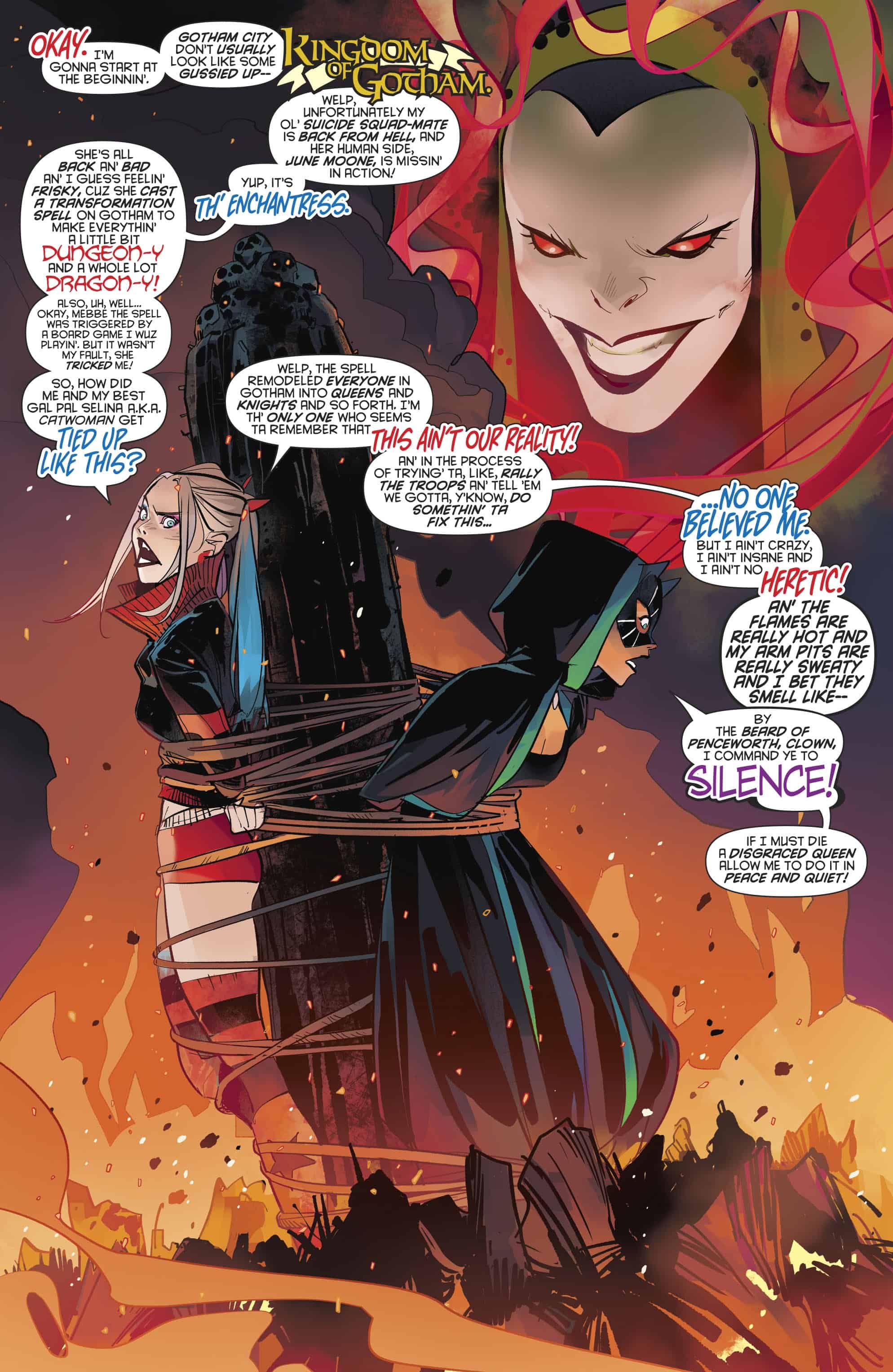 I’m not sure how writer Sam Humphries does it, but he truly does have an uncanny ability to take an outrageously whimsical story and inject a heartfelt and relatable message, even when it doesn’t seem possible. By all rights, we shouldn’t be wiping tears from our eyes after reading this dungeons and dragons inspired epic story, but the ending is nothing short of a gut-punch. One that is unfortunately all too real.

As Harley navigates her way through another Trial from Mirand’r, the creative team develops the story with multiple references to current DC continuity including one short story about the recent troubles between Catwoman and Batman. This is all done to bring in the ultimate dungeon master of DC Comics, Jonni DC, Continuity Cop!

As longtime readers (not SO long ago, though) may know, Jonni DC was a major character in the “Triumph” arc that started just after issue #50, so her inclusion is definitely a welcome surprise. With the girls all back together in Harley’s apartment thanks to a quick retcon from Jonni DC, we almost immediately get dragged back to reality in the worst way possible.

The reveal of Harley’s mother’s cancer was terrible, but this is something that is still shocking. A terminal diagnoses for Harley’s mom really puts the last two issues into perspective, drawing a stark contrast between the fantasy epic and the real world. This emotional development works at the end of such a wild issue because of it’s overarching narrative certainly, but also because it gives just a tiny bit of insight into the ongoing psychological state of Harley Quinn as an individual. This type of drastic emotional change is something that plays into the core aspects of her as a character and it’s something Humphries fundamentally understands.

Otto Schmidt continues his excellent debut with some really gorgeous artwork, but Dave Sharpe continues to impress with his near-iconic letters for Harley. Combined with Humphries’ writing, this is a powerhouse creative team that I’m hoping will continue to deliver one great issue after another.

As the drama continues to unfold in Harley’s life, she must also confront the last of the Trials. Something tells me her mother’s recent diagnoses will be key in overcoming what’s to come though.

Harley Quinn #62 continues the epic fantasy story with plenty of fun quips and witty references to current DC continuity, but the ending is one that could change the course of the series from here on out. It is this emotional foundation that allows this book to succeed so well, and will have fans coming back to see what happens next.