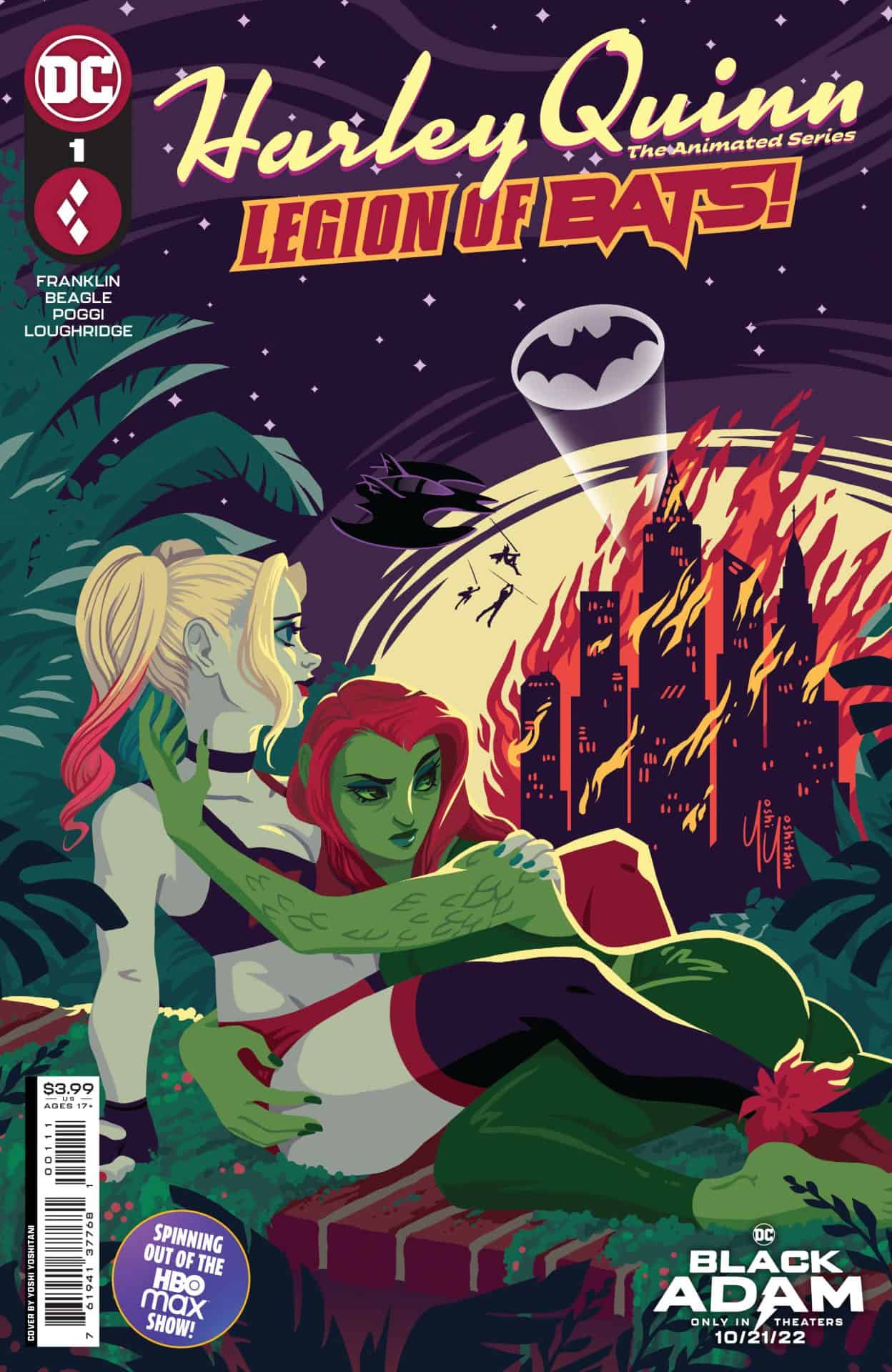 When last we checked in with Harley Quinn, she ate, she banged, and she killed—but now it's time for something a little different. Fresh out of the events of Harley Quinn: The Animated Series season 3, Harley has found herself a part of a highly unlikely team—the Bat-Family! Meanwhile, Poison Ivy has found herself prepping for her new job—leader of the Legion of Doom! But while Harley and Ivy adjust to their respective new roles, a ghost from Ivy's past enters the fray and threatens the relationship between everyone's favorite clown/plant couple!

Legion of Bats kicks in right off the bat (bad pun intended) with a fantastically fun character-filled issue, and the art by Shae Beagle and Roberto Poggi really fits the crowded, expansive and at the same time intimate nature of the narrative: from Harley’s new association with the Bat family (see season 3 of the Animated Series to know why) to the domestic life of Ivy and Harley, this cartoonish style stretches and tangles to great showcase of fight scene, but also intimate (sexy!) ones. As a big fan of what Max Sarin did in The Eat. Bang! Kill Tour comic, I feel like the way the new artists pick up the pencil from them is clever, distinct, but still keeps that joviality, that levity and the fun-tastic exaggeration, accompanied by Lee Loughridge’s pompous colors. 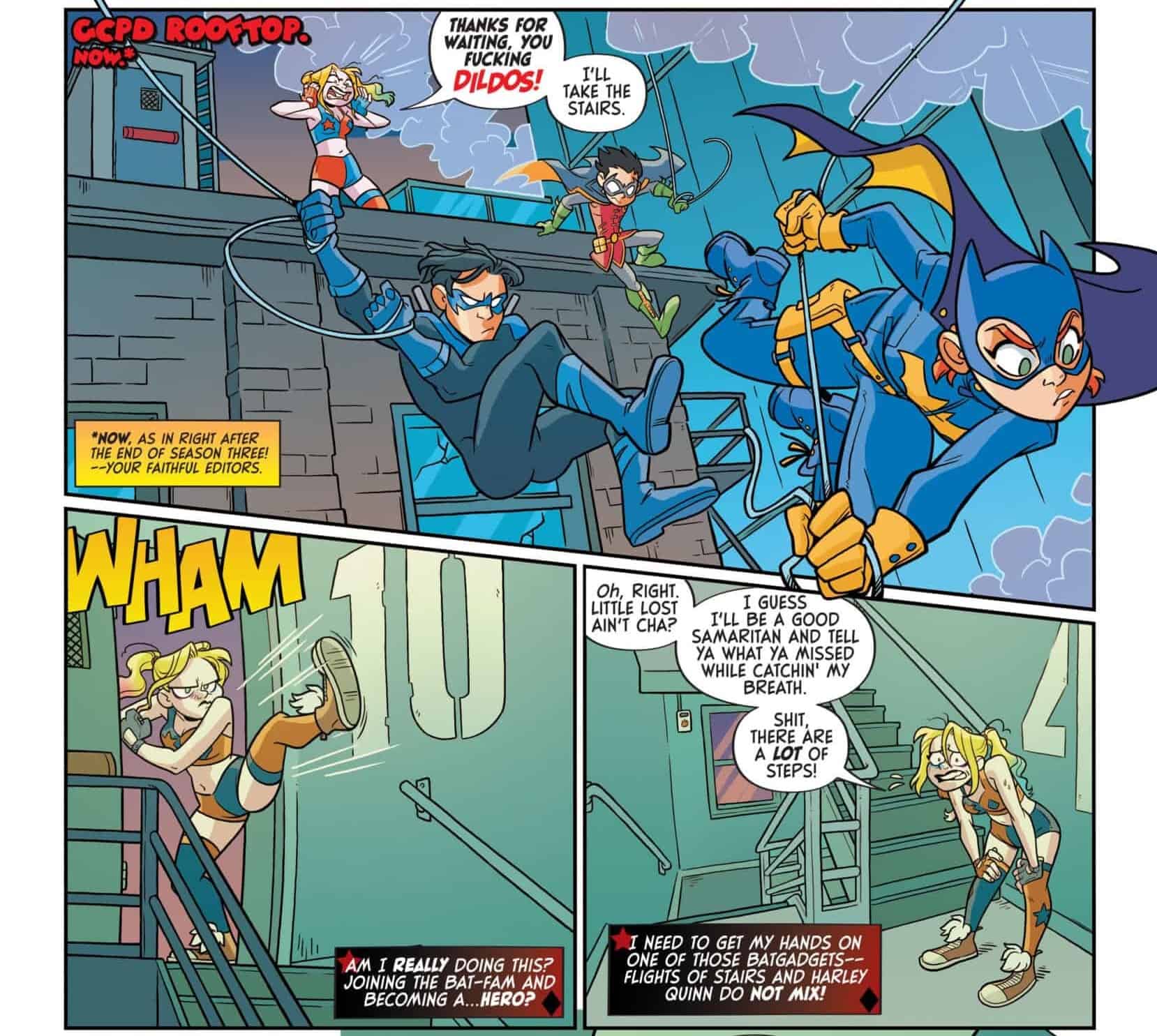 Then there’s Tee Franklin’s fantastic writing, which always seem to combine the best from the fun of Harlivy and all the surrounding characters, the insight into their emotional past and relationships, and social issue bigger than them that really need a space in comic books more often. I’m not gonna lie, as a woman with ADHD who identifies with Harley Quinn quite a lot, I tore up a little at the confirmation that she has ADHD too (and it was done in a hilarious, respectful and very casual way that I just adored), but this representation is not only good for me, it’s necessary for neurodivergent readers, as ADHD in women is heavily underdiagnosed and under-discussed. Then, the inclusion of consent and kink in the story delight me, as well as the hints to Harley and Ivy’s polyamory relationship that I hope we can get soon (as it’s shown that both have a crush in Wonder Woman). And, to add to it, the inclusion of a recently invented character from Poison Ivy’s life as the main villain, in a way that is exciting, intriguing, and wants you coming back for more.

The best part of the inclusion of all the important themes and added backstory in in the book is Tee doesn’t sugarcoat but naturally mixes all the progressive elements and fun bits into a story that promises to go as deep in Ivy’s psychology as The Eat. Bang! Kill Tour did (and adding more of Harley’s own dilemma into the mix), while being as fun and bombastic as that one. And, even more cleverly, it uses Harlivy’s relationship tensions to fit like a glove between seasons 3 and (the upcoming) season 4 of the show. And the cover by Yoshi Yoshitani is a delight. I’m so pumped!

Legion of Bats! #1 is bombastic, clever, hilarious, intriguing and everything else. And it definitely is for the delight of the Harlivy fans!