Harley Quinn: The Animated Series – The Real Sidekicks of New Gotham Special #1: What A Bunch! What happens when writers from Harley Quinn (the TV show) and Harley Quinn: The Animated Series: The Eat. Bang! Kill. Tour (the comic book) get together and swap stories from New Gotham? Absolute mayhem, that’s what! Follow what happened to some of your favorite Gotham sidekicks on Tawny Young’s new trash-tastic daytime talk show and watch the chairs fly as they spill the tea! Guest-starring Clayface, Batgirl, Frank the Plant, and Harley Quinn’s worst sidekick…The Joker!

With a multitalented creative team and a myriad of different stories, this sort-of-anthology uses Tee Franklin and Max Sarin’s ‘Tawny Talks’ (New Gotham’s universe take on The Wendy Williams Show) as the common thread and catalyst of its absurd and over-the-top conflict. And, like the Animated Show that this comic accompanies, there are a lot of themes and varying characters painted on these pages. ‘The Real Sidekicks of New Gotham’ does an excellent job at grey areas and the “real” part of it is highlighted, not shying away from the worst and morally difficult part of these characters.

The absolute highlight for me was the adorable ‘Double Date’ between Harlivy and Vixenelle (really making up ship names over here), which not only paints a realistic (and sexy, and entertaining) picture of what partnership can look like for disabled and chronically people, but takes the time to frame Vixen’s complicated relationship with Harlivy and their morals, as well as the underlying solidarity that forms between these two sapphic couples. With ONeillJones’ art being simply mindblowingly beautiful, and the most amazingly charm and profound colors by Jordie Bellaire (no wonder she got an Eisner), it stands as one of the most sweet stories of this universe. 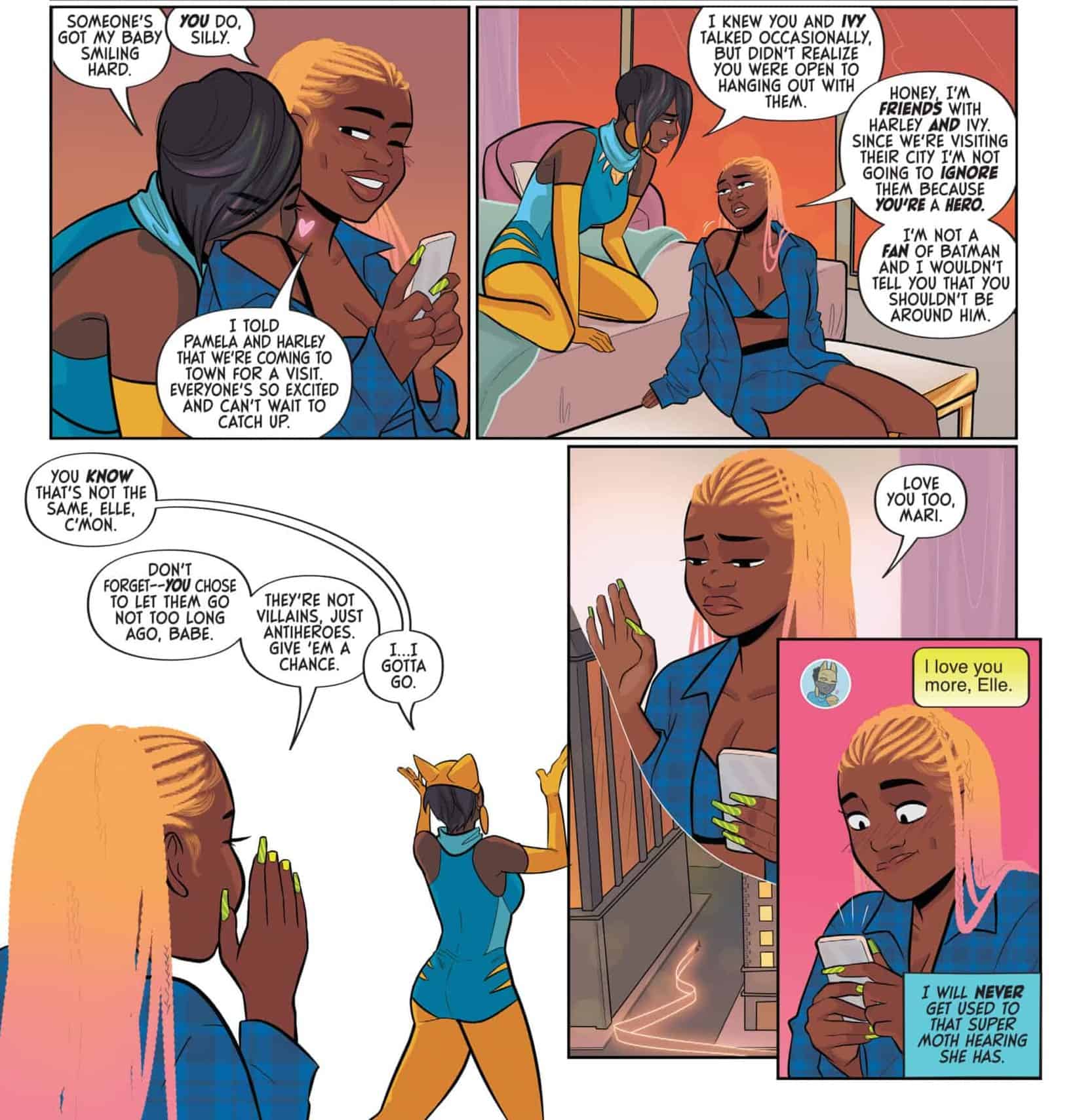 From the other stories, there’s definitely a mixed bag narrative-wise here (with an otherwise strongly coherent art teams, specially on the color side), but one that won’t keep you indifferent for a minute. ‘Identity Crisis’ questions the class position of Batgirl and her relationship with the status quo, showing a villain that has a lot of ethical reasons behind them (and it’s fun and hilarious at that, which, impressive); ‘Showtime’ and ‘Wild Ride!’ show two very different faces of fatherhood, which are heartbreaking and macabre in different ways and don’t shy away from difficult topics (like sexual assault of child abandonment), and ‘Two Jokers’ reframes Joker’s supposed “redemption” arc of the TV show in a perverse way that I’m ready for the show itself to take.

There's a lot of variety in this comic book, with tons of fun, depth and interesting stories. Really  worth checking out if you're a fan of the Animated Series and/or you enjoyed Harley Quinn: The Animated Series: The Eat. Bang! Kill. Tour.

Harley Quinn: The Animated Series – The Real Sidekicks of New Gotham Special #1: What A Bunch