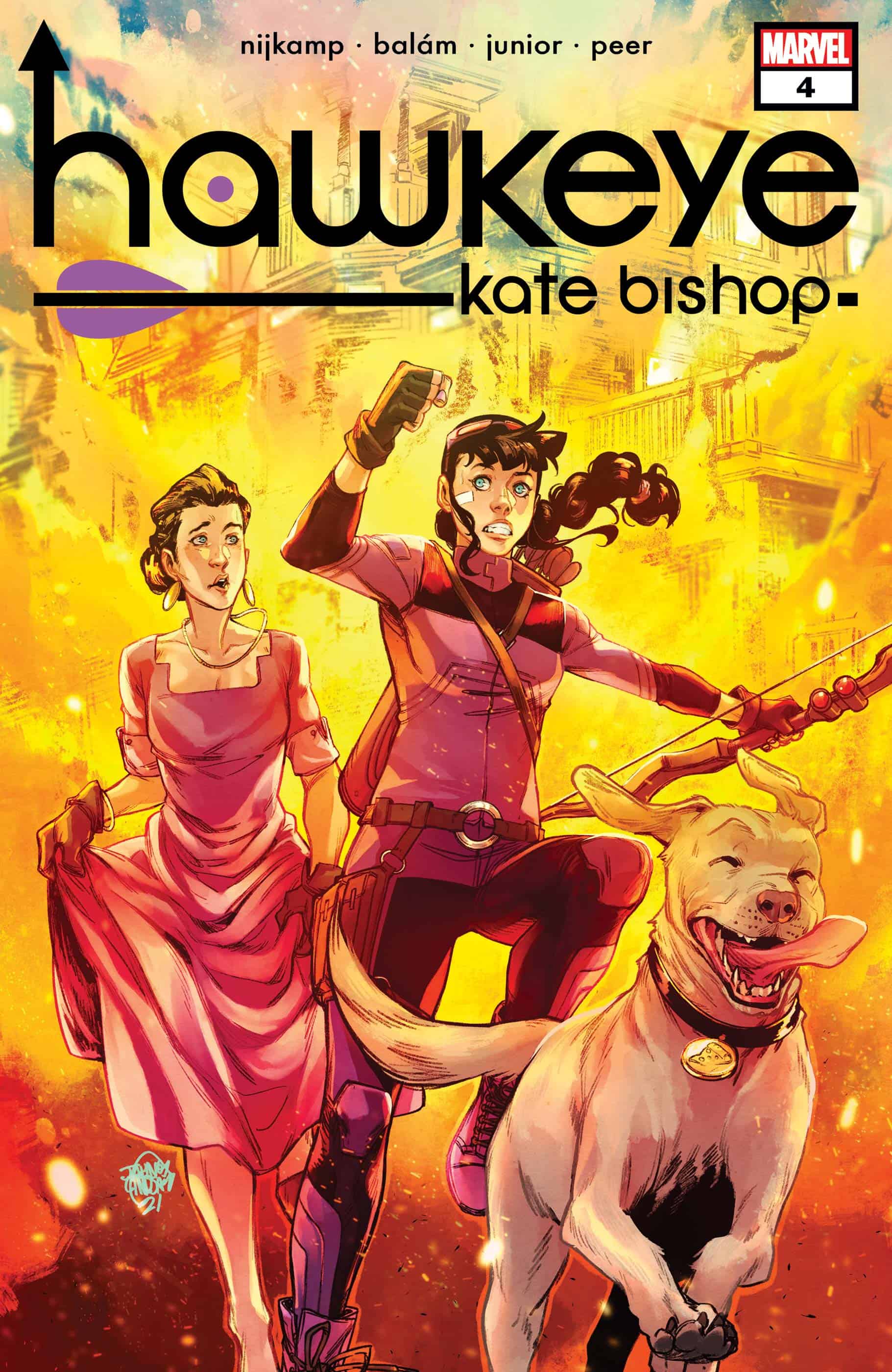 Kate Bishop hates the circus! Turns out that the Resort Chapiteau is being run by none other than the Circus of Crime as nothing more than a new and exciting way to part rich people from their money. Except the signet ring they stole from Susan unlocks her safe at Bishop Manor, which contains something way, way more dangerous than stacks of cash. Also, the resort is set to self-destruct, and the guests (and Susan and Lucky) are still inside. Worst. Vacation. Ever.

Kate Bishop is not having a good week, ok. She’s reunited with her sister, and there are crazy circus people with mind control technology, and they have bigger plans! Somebody call Clint Barton..or better not.

Once again, Nijkamp has done her homework, giving us a solid callback to the 2012 Hawkeye run. If you’ve read the run, you’re familiar with the context. As I have little memory of that run, it doesn’t matter in the grand scheme of things if you haven’t. But it is helpful for those that like explanations for everything. The point isn’t whether we know everything. It’s that our author does.

Our dastardly villain is out to get others to do her dirty work, and the way she goes about it is pretty clever. What’s a little mind control, lowered inhibitions in exchange for some petty theft? Our villain even presents a generous offer of “freedom” to Kate Bishop. Does anybody else get weird Loki, ala Avengers vibes from this? Cause I sure did. Unless Nijkamp plans to elaborate on this further, I’m a bit fuzzy on how mind control = freedom. Is it freedom in the sense that Madame uses them to do the wrong things they’ve always wanted to do? Could be.

Never underestimate the power of the right accessory to get you out of a tight squeeze. Despite all the craziness, Kate manages to do her job as a superhero. Although, how she rescues her sister isn’t entirely clear in the art. But you got to love all the sisterly bonding they’ve been doing, whether they want to or not.

In conclusion, the first part of this adventure leaves a bit desired. The art, though still excellent, does not illustrate how Kate was able to snap her sister out of her mind control. The two sisters worked on getting everyone out of the resort before it was all consumed by fire. But it lacked a feeling of urgency and danger.

On top of it, there’s an obvious implication that America and Cassie are coming to help. Yet, even though America can teleport, and Cassie texts, “We’ll get right on it!” Neither character appears. Perhaps we will see them in the next issue, which would be a treat. Otherwise, there’s no difference between the texts in the latter half of the issue and the first page where Kate is texting Clint.

But it is still a decent issue if you’ve been enjoying it so far. Worth checking out.

The artistic scope and emotional journey conveyed throughout the previous issues are lacking here. Nevertheless, the promise of what is to come keeps me interested in the comic. But this was not as strong an issue as we have previously seen. I hope we see Cassie and America appear at some point, because otherwise, all the teasing is unfair.