Hawkeye: Kate Bishop #5: A Family End to a Family Adventure 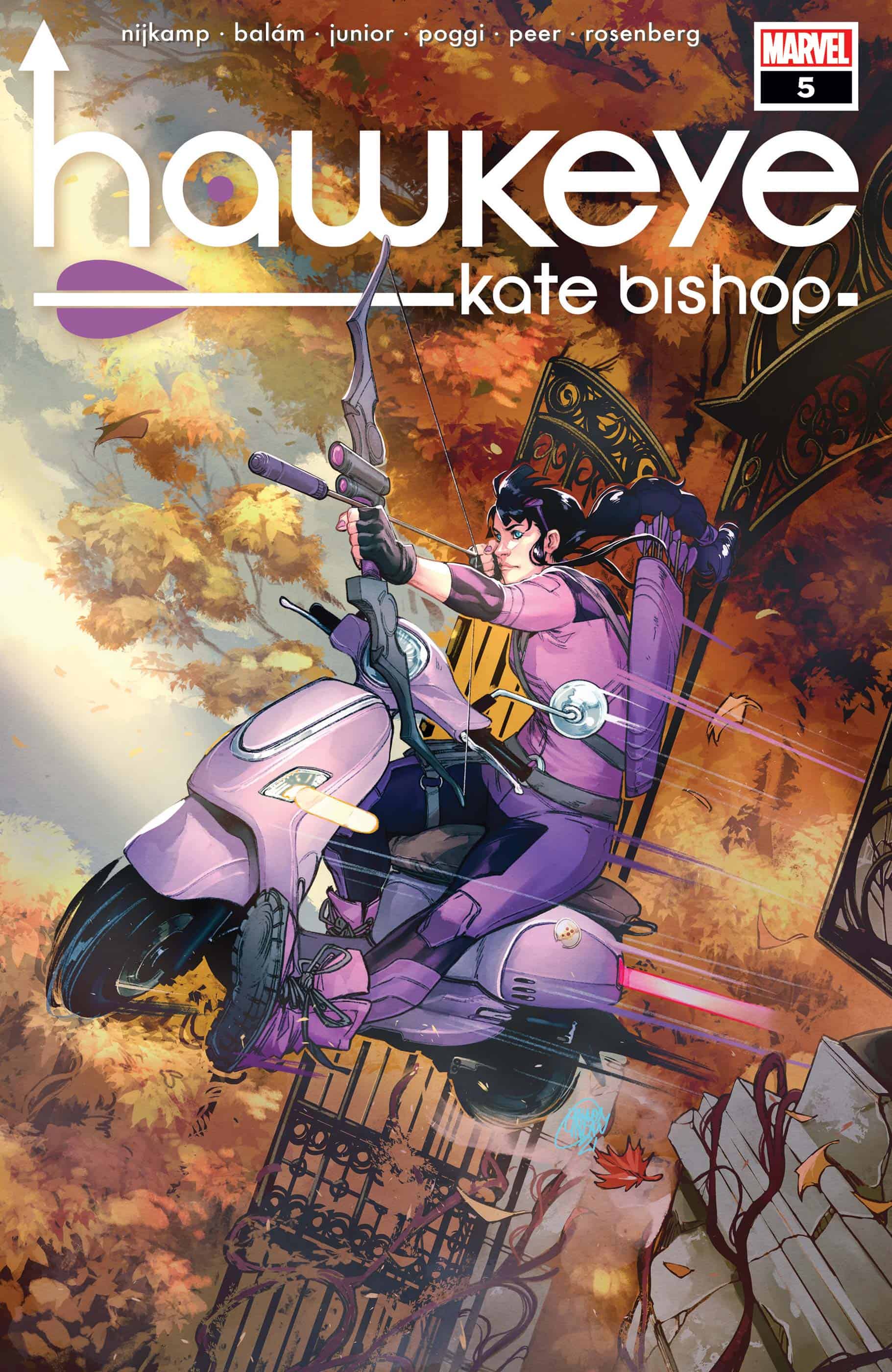 It all comes down to this! Kate, Susan, and Lucky have to shut down Resort Chapiteau once and for all, and to do that; they have to follow the Circus of Crime into the very last place Kate ever wants to go: home. Don’t miss this fantastic Hawkeye finale – you will have such a good time!

After a somewhat confusing penultimate issue, it is a fresh change of pace to see Kate and Susan working together with Kate’s bests friends in the entire world. And yet, something was still missing.

Nijkamp delivered an ending that prioritized who Kate is, and yet, when given a chance to explore Kate’s psyche a bit in the climactic moment, it faltered just a little. Don’t get me wrong; this is still the best characterization I’ve seen of Kate since Children’s Crusade. But that doesn’t mean I didn’t expect something a little bit more epic. But I don’t think it was meant to be. The comic was always about Kate and how she felt about who she was and her relationship with her sister. That story came full circle.

There is a ton to love about this issue, and as things come together, our bad guy is defeated; I want more. This comic finally gave us what it promised a team up with Cassie and America that didn’t deliver as much as it should have. But I get why. This wasn’t about Cassie and America; this was still Kate’s story. It’s about Kate and Susan coming to an understanding building across these five issues. This is obviously what Nijkamp set out to do, and she did it.

The action felt a little off-kilter, though the mirror imagery was well done. I think the comic art overall went a bit downhill on the move. It started as fast-paced and quick and mellowed out. Not sure what happened. Despite the plot, the reader never feels the weight of what is happening.

I want to see Nijkamp continue to write Kate; I want to see more interaction between all four of these fantastic female characters. Plus, if anyone missed it, this is the first time Cassie and America exchanged dialogue. I’d say this is the first time they’d share screen time, but they were both and Wiccan and Hulking’s wedding. But the difference is they didn’t interact there. Here they seem to have bonded. It was a pleasure to watch and made me want to read more.

Kudos also flies to a new, softer side of America. She’s still badass, but I felt she was a bit more chill compared to how she was in her last solo. But each of the three superheroes maintained their personality traits. However, I wonder what Nijkamp thinks about Kate and America’s friendship? Certainly, worth exploring further. And speaking of characterization, I greatly appreciate the acknowledgment that Cassie Lang is a scientist and not a kid. It is time for Cassie Lang to get her degree. Don’t leave Eli hanging as the only Young Avengers to be confirmed as gone to college.

I don’t know what’s next for Nijkamp, but I am excited to see what she tackles after Hawkeye. She crafted a sweet and fun adventure even if the stakes of battle weren’t all that huge, we came to see Kate deal with her past, and that’s what we got. And that was amazing.

Be sure to read the whole adventure and pick up issue five. It’s a soft conclusion to a gentle comic about two sisters learning to love each other and understand each other.

Hawkeye: Kate Bishop: A Family End to a Family Adventure