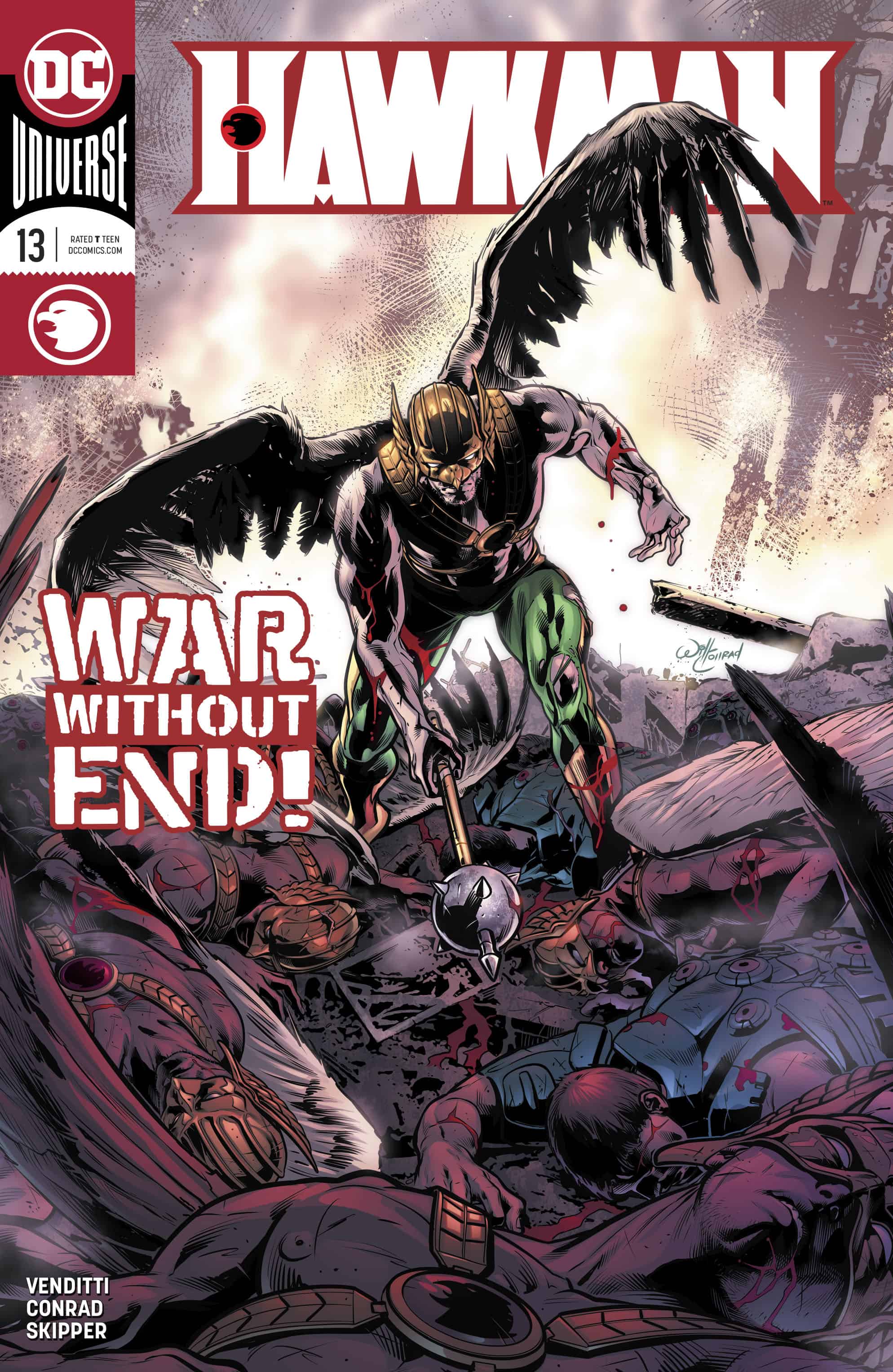 After averting certain cataclysm at the hands of the Deathbringers, Carter takes a little time to catch up on his past lives by reading one of the many journals he has collected from those lives over the years. 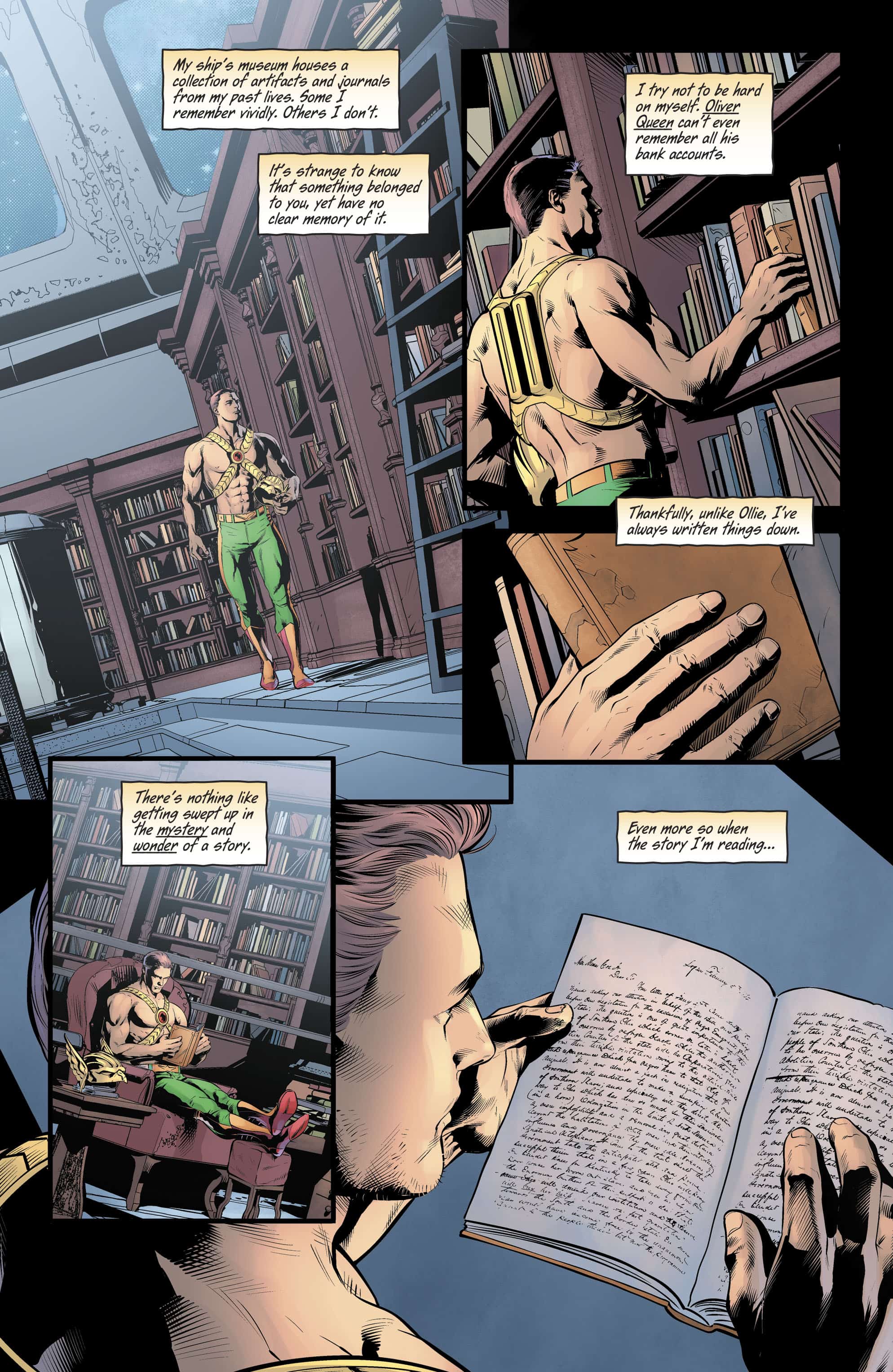 This particular journal tells the tale of Carter in a multi-generational war on a distant planet. Here, the war has gone on for so long that neither side remembers why they are fighting in a war that spans hundreds of years. In that time, Carter finds himself serving first with the Grounders until he is killed in action only to be reborn among the Booters on the other side of the battlefield. 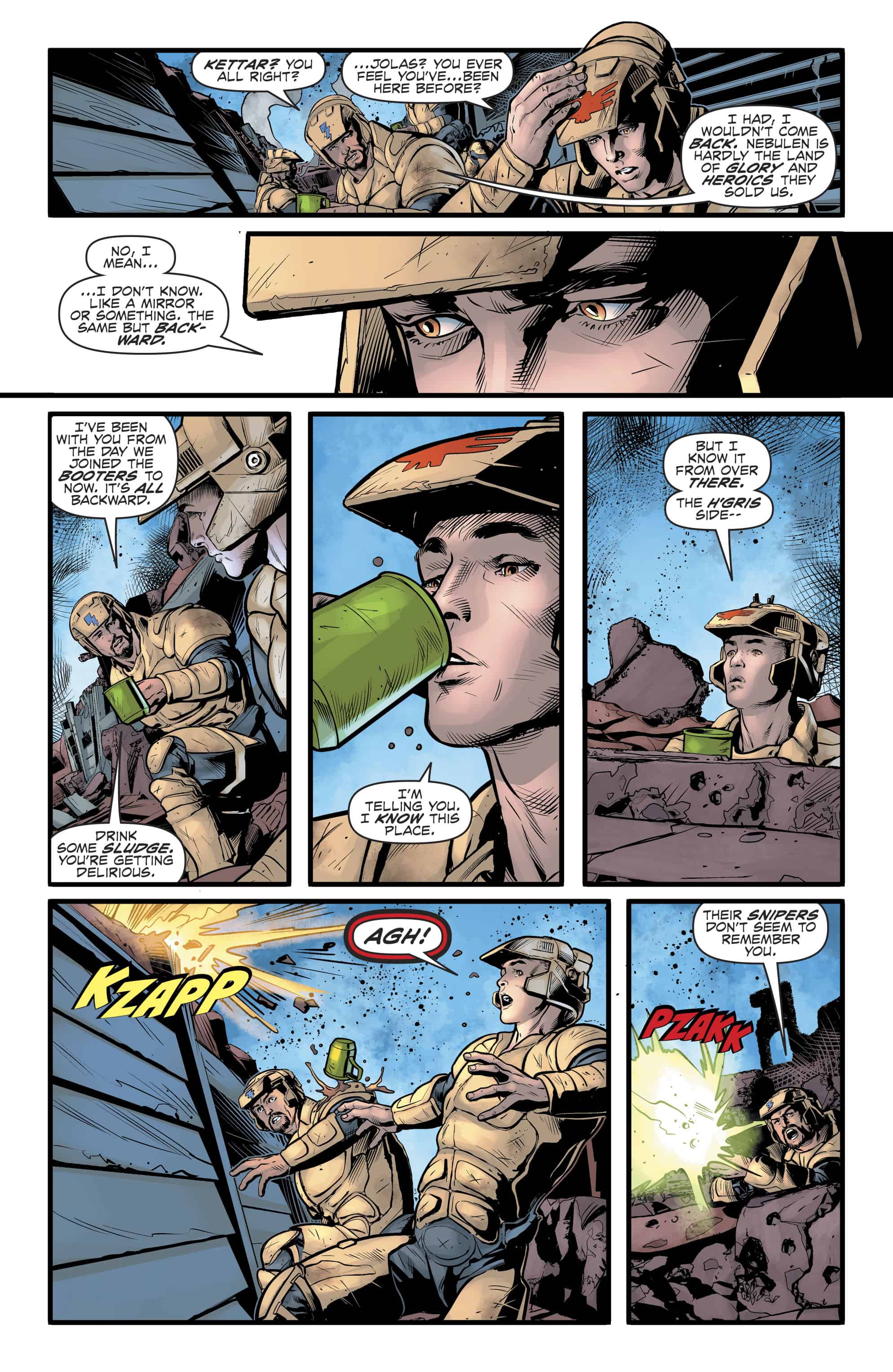 After countless deaths and rebirths, however, Carter tries something new. Ranging into the No Man's Land that stands before him, Carter encounters a female soldier from the other side (see below for more on this "mysterious" woman) and offers her food-- a gesture that singlehandedly ends the war. When present-day Carter travels to the planet, he sees firsthand the monument to this moment and the peace that persisted there because of a single action.

This issue stands alone as Hawkman transitions from the first year into the second of the Venditti era. It is unclear yet whether we can expect more vignettes along these lines of Carter exploring past lives or if this issue is merely a buffer between larger arcs, but in either case, it holds up well as a strong text in and of itself. It is a story of man torn between cycles and purposes, struggling to find a way through and choosing instead to go over the obstacle. 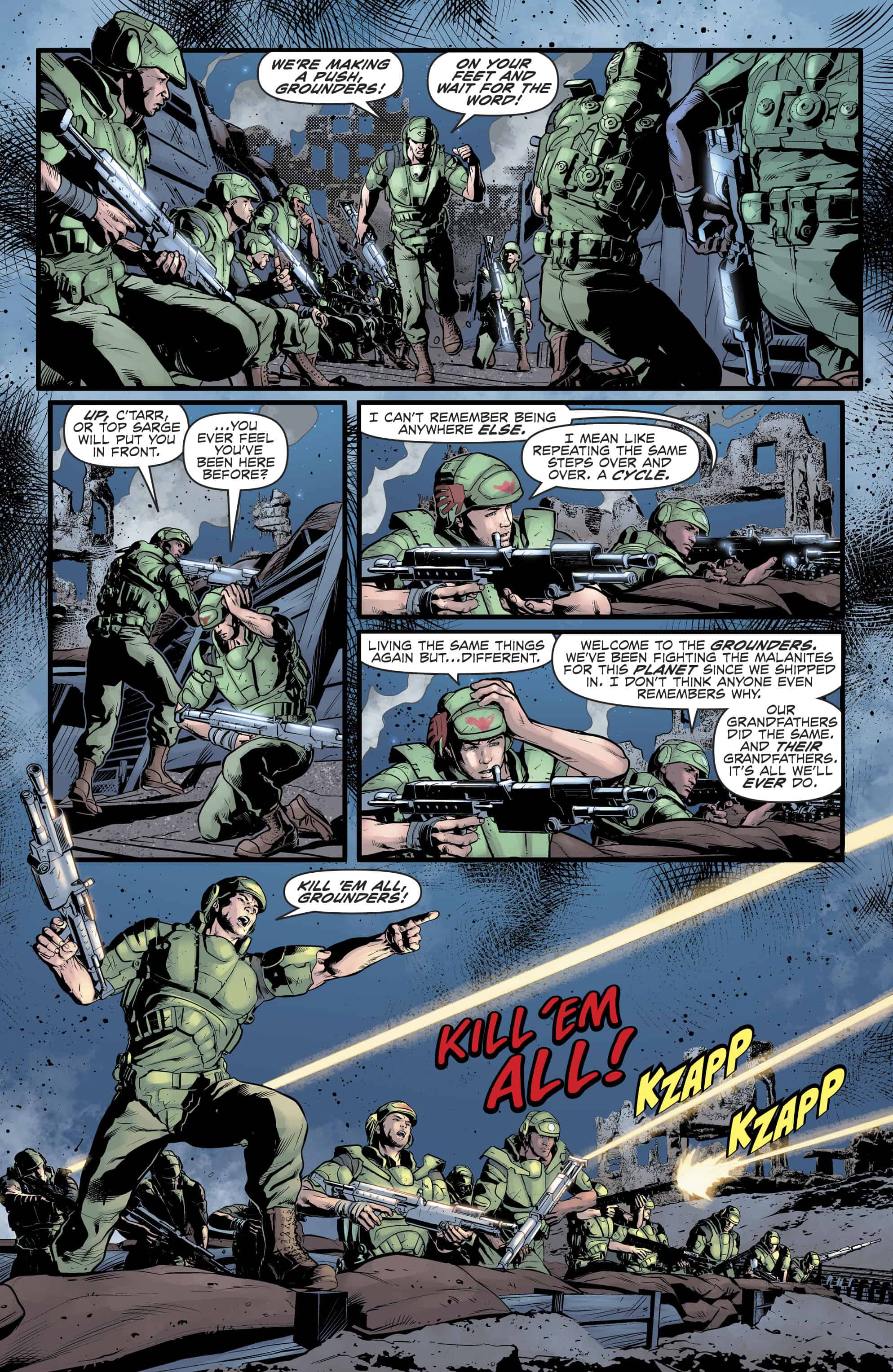 Will Conrad finds himself in the unenviable position of having to follow an outstanding year’s worth of art from Bryan Hitch yet manages to hold his own quite well. There is a drastically different mode of visual storytelling deployed here. Where Hitch is the master of the wide-screen, the larger-than-life page, Conrad seems to strike a balance between the micro and macro. The decision to keep colorist Jeremiah Skipper and letterer Richard Starkings also went a long way towards smoothing the art transition over, a wise call by the editorial powers that be. 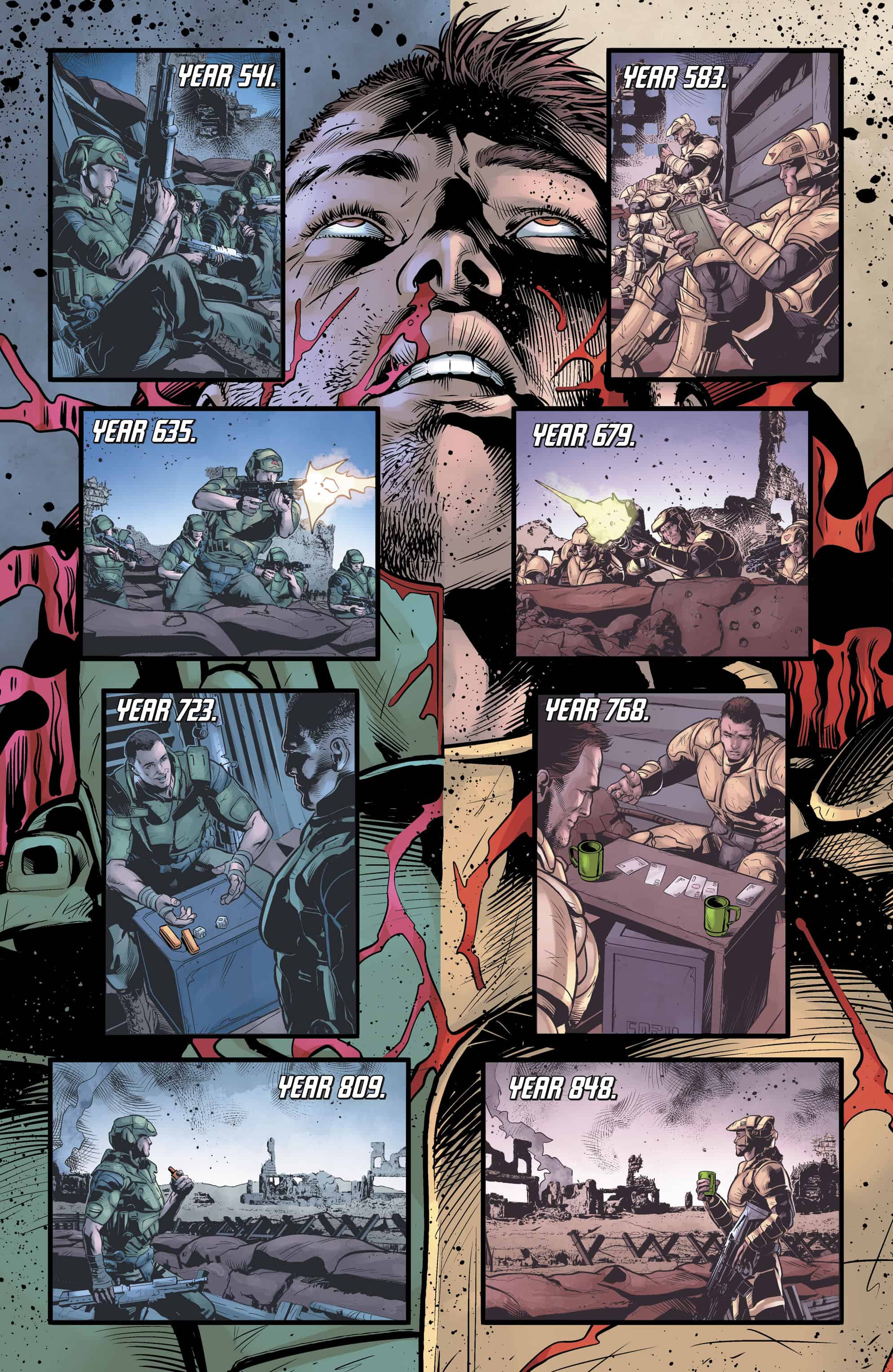 If there has been a valid complaint thus far in Hawkman (a very minor one at that), it has been where Hawkgirl fits into this new origin structure. There have been potential figures already that could show evidence of Carter’s soulmate being still very much a part of his journey but this issue was the first time we saw nigh-irrefutable proof that she will soon be a part of this story as well. The female soldier our hero broke bread with was named similar to Hawkgirl but slightly off, as we also see with the various incarnations of Hawkman through the years. This subtle nod is not to be missed as I expect it will bear great significance moving forward.

Join Will Conrad and Robert Venditti for the start of an all-new era in Hawkman #13.