HEART EYES #1: A Girl That Walked Around During the Day 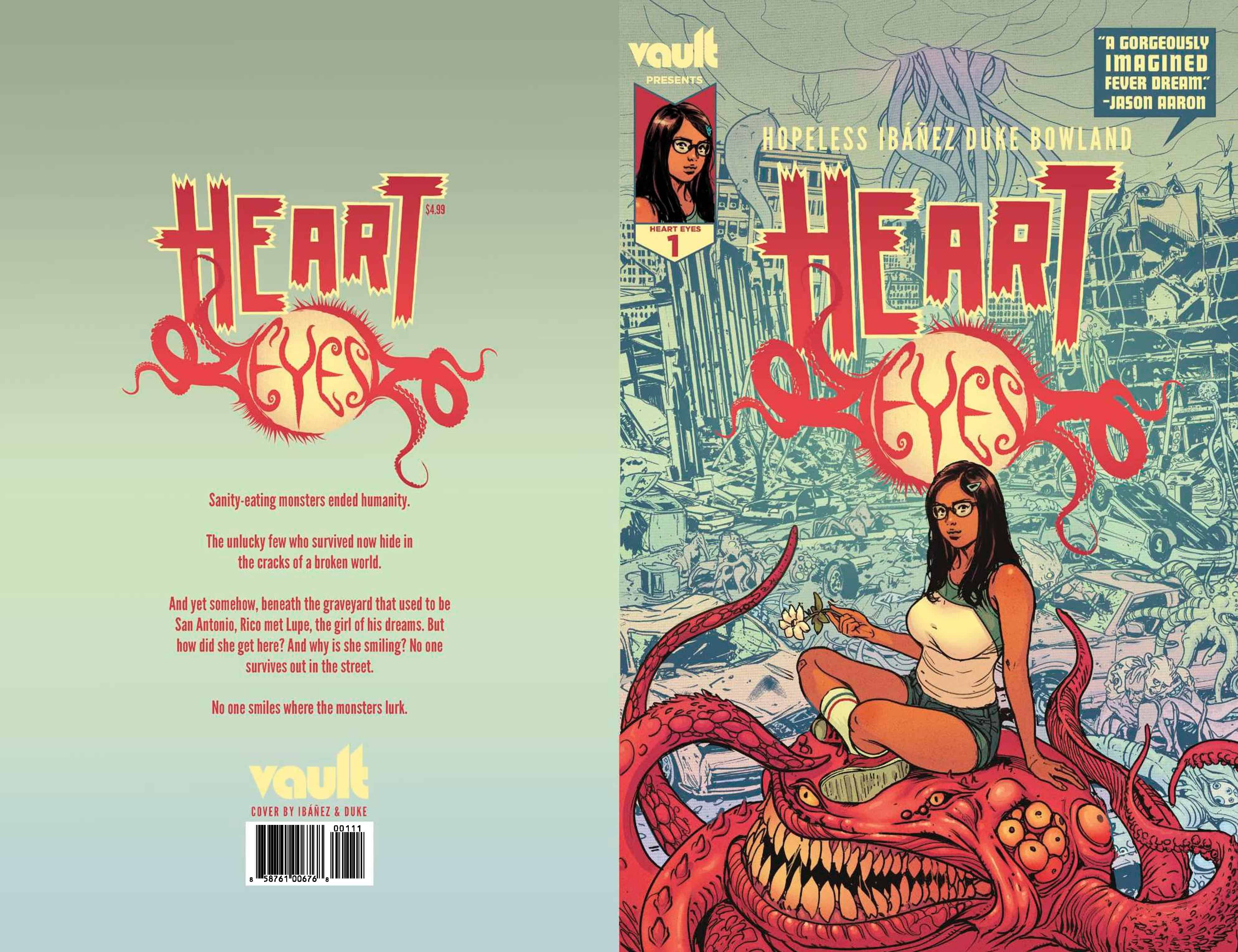 Sanity-eating monsters ended humanity. The unlucky few who survived now hide in the cracks of a broken world. And yet somehow, beneath the graveyard that used to be San Antonio, Rico met Lupe, the girl of his dreams. But how did she get here? And why is she smiling? No one survives out in the street. No one smiles where the monsters lurk.

Welcome to to the end of the world…no scratch that. The world’s already ended by the monsters, Lovecraftian horrors that just showed up one day and wiped civilization out in a blink of an eye or did they? 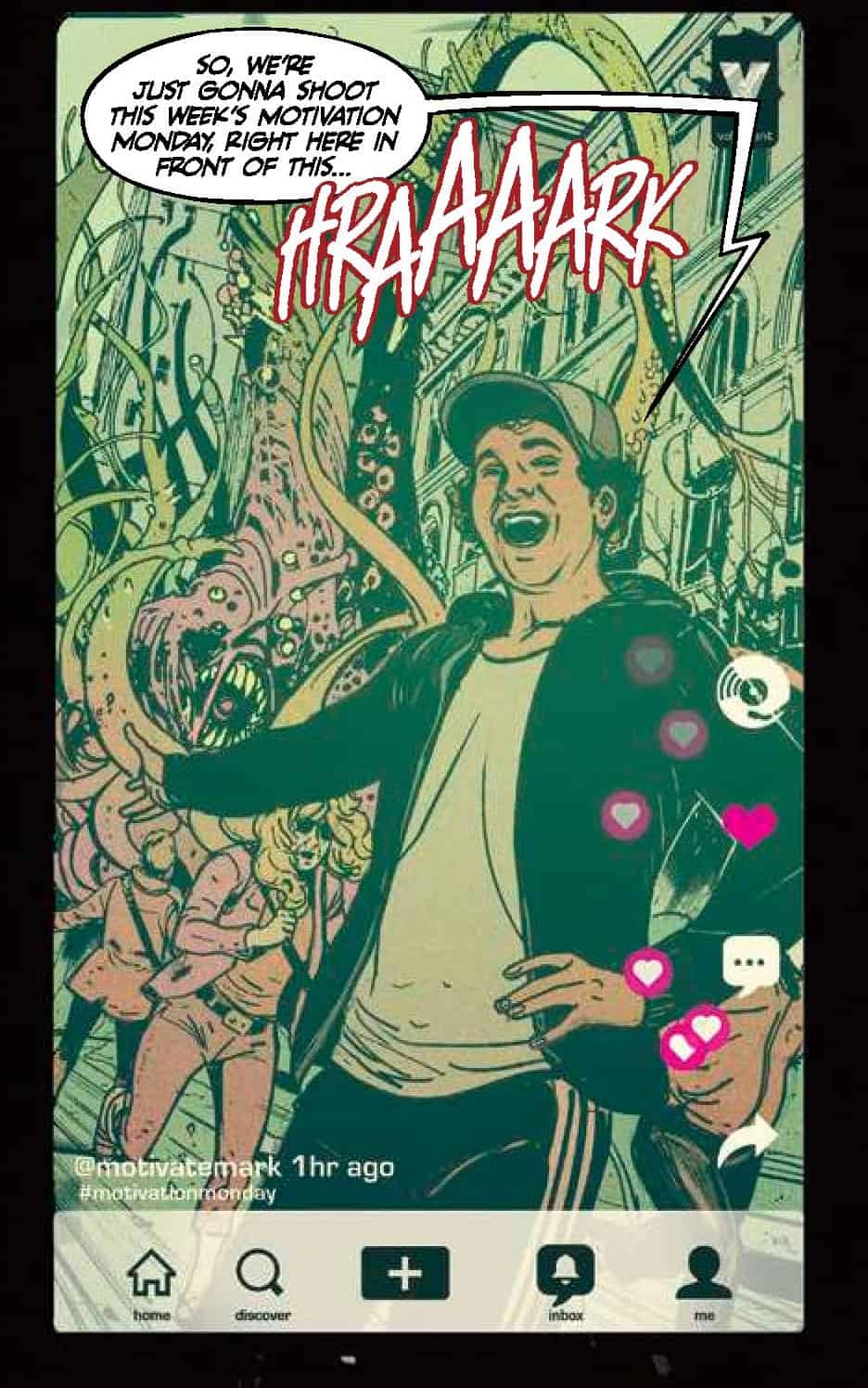 Hallum and the creative team drop us us into this world after a really clever (and darkly funny) introduction involving a social media influencer (I swear if we were ever invaded by monsters some idiot would proper die doing exactly what that guy did) a brief history of the short struggle and then we meet Lupe walking in the ruins of what’s left of human civilization. To describe Lupe as a bit odd would be an understatement and Hallum and co show that difference in Lupe’s attitude to the world versus the hiding humans who she encounters after being “rescued” by a young man her age named Rico. The post monster apocalypse human beings are nervous, frightened creatures who live by careful rules dealing with PTSD and loss of loved ones, always on the look out for monsters even though they haven’t seen one in a while. Lupe by contrast is more worried about not being able to swim than being destroyed by monsters, and walks about freely in daylight which immediately comes off as strange to Rico’s family especially his sister. It isn’t till the end of the book that you get insight as to exactly why Lupe is the way she is. It’s connected to her past and history with her uncle and may be connected with the monster apocalypse as well… 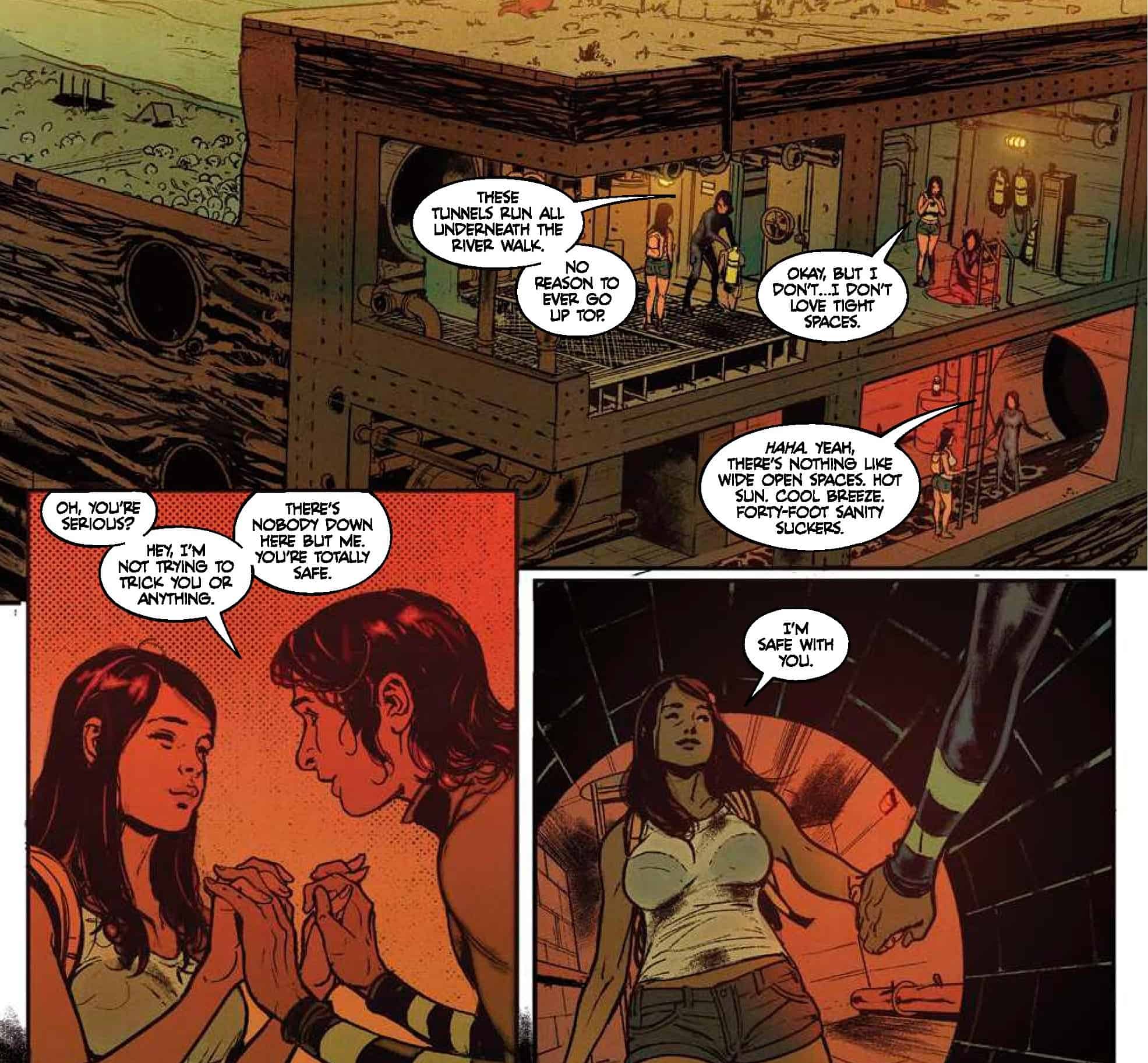 Hallum does an excellent job with the human interaction in the book from Lupe’s meeting Rico and the growing attraction between him and Lupe to the interactions with the other members of Rico’s family. There’s a excellent organic feel to the dialogue which is then laced with a healthy dose of unease that plays in the back of your mind as you read. Lupe is likable but there’s definitely something off about her and that oddness is always playing in the back of your brain as you follow her on her journey until right at the end where things get overtly creepy as certain truths about her and the monsters are revealed. 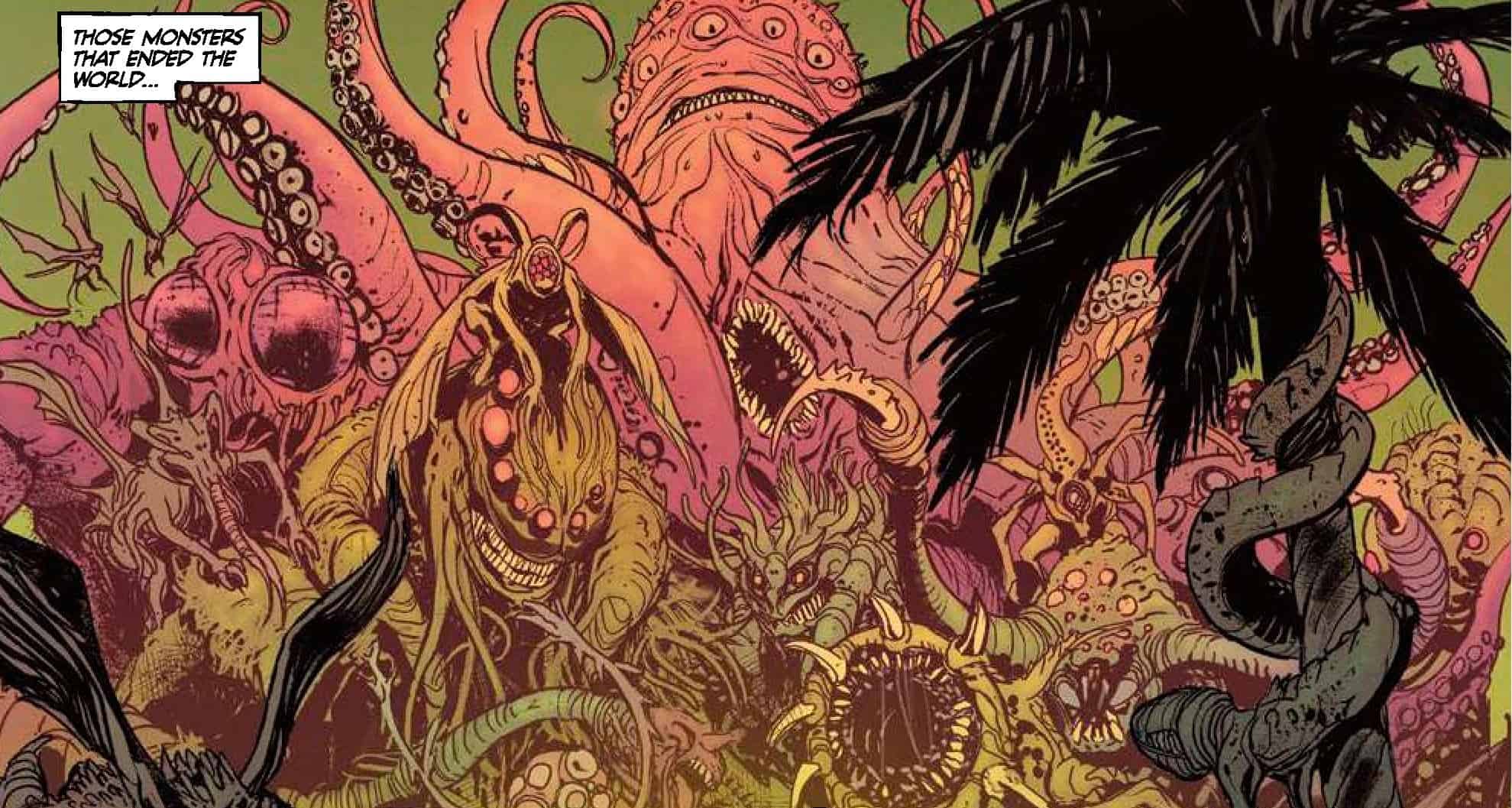 Victor Ibanez and colorist Addison Duke bring the monster filled apocalyptic world to life. Ibanez’s superbly clean lines and exceptionally detailed panels get a muted but wonderfully colorful palette from Addison that paints an apocalyptic world of broken buildings and streets littered with the remnants of what was human society. Everything is marvelously detailed. Ibanez then makes sure to handle the human interactions with good detail on the facial expressions and that penchant he has for a very natural look to the physiology of the the characters. Then in sharp contrast to that there are the monsters which are Lovecraftian nightmares of the highest order bosting eyes and tentacles and twisted,  bodies in every shape and size your worst nightmares could conjure. It’s an exceptionally well drawn and colored debut from the creative team to match Hallum’s strong script. lettering is spot on from Bowland and I really like the way it sits in contrast to the art and is easy to follow the entire issue.

The variant covers for Vault comics continue to be a incredible assembly of artistic talent and this debut issue has a host of absolutely show stopping ones from the talent involved. I highly recommend seeking more than one cover out if you going to get this issue.

HEART EYES #1 is a journey into a deeply intriguing Lovecraftian monster apocalypse brought to life with beautifully detailed and colored art that hums with just the right balance of human emotion, supernatural drama and mystery surrounding it's rather oddball central character, to sink it's hooks into you and make you want more!

HEART EYES #1: A Girl That Walked Around During the Day