Hellboy and the B.P.R.D. – The Beast of Vargu: Some Assembly Required 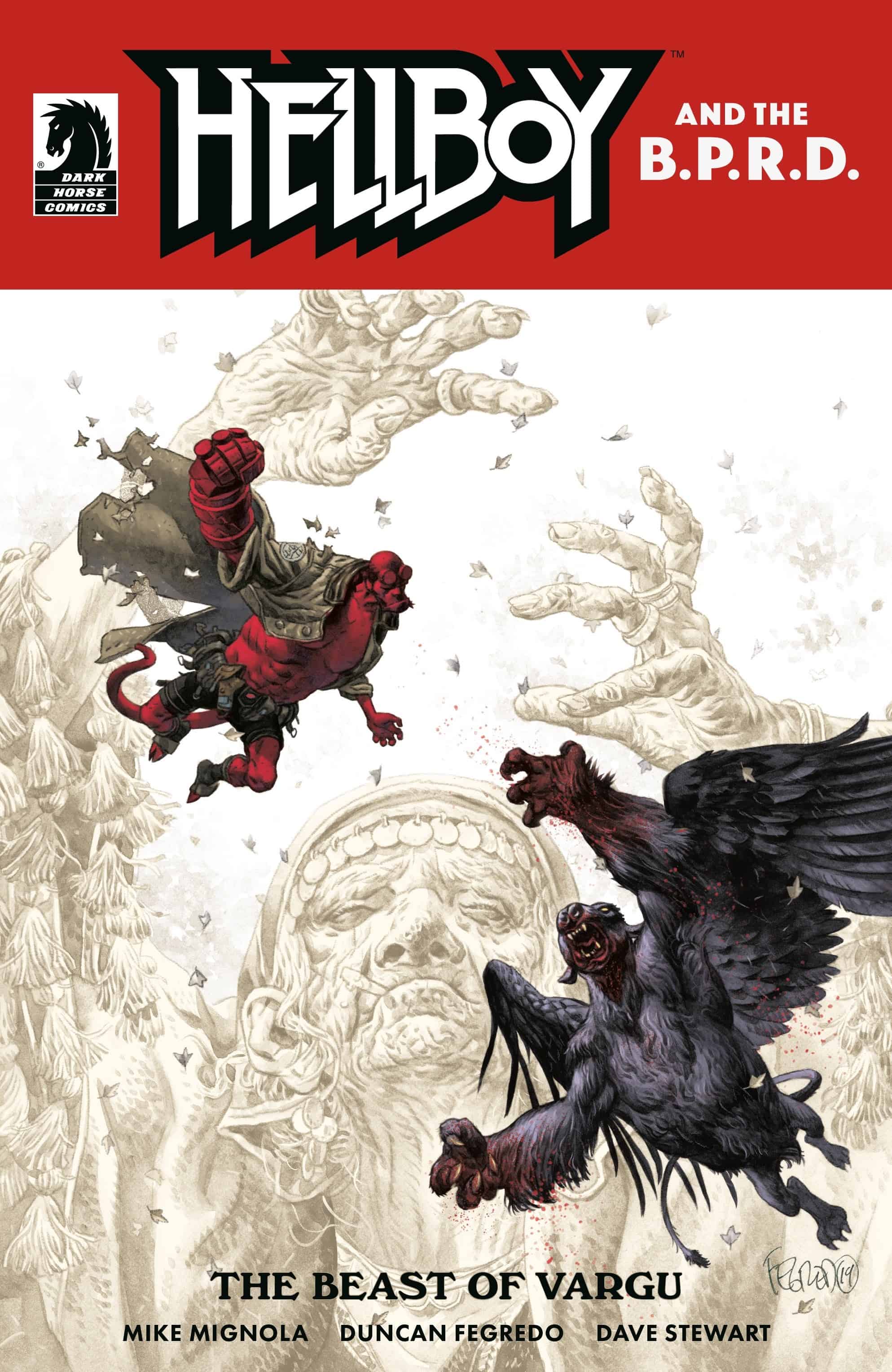 It’s 1962 and Hellboy is sent alone to Romania in two separate tales that interlock and inform each other. The first sees him tackle a man eating monster in typical Hellboy style. But after he fails to to beat the beast, a wise Roma woman gives him a second chance. With just the gift of some of his blood she rewrites events to enable him to overcome the adversary. And with the help of the transformed man’s mother, who herself failed to undo the curse in the past, they win out and end the curse. The second tale that sees him break bread with those who helped him is a more sedate campfire affair, and the ones who witnessed his antics offer us some insight into his very strength of character, by recounting a tale of a man god and comparing him to the hero of the parable.

Story: At first glance the Beast of Vargu could be seen as nothing more or less than typical by-the-numbers Hellboy, in much the same vein as the more elaborate Wolves of Saint August. 1) Hellboy quizzes locals. 2) Hellboy investigates ruins. 3) Hellboy encounters huge monster….And 4) fighting ensues. However even though this story is some 20 pages shy of that seminal tale, it does offer a little something more than a simple ‘Hellboy Smash’ scenario. Both stories not only offer more insight into how people perceive him, but they also allow us to see him through the eyes of someone who is a bystander and not one of his paranormal co-workers for a change. And so the secondary characters thus become the storytellers. As such the post battle sequence is where the real story is. 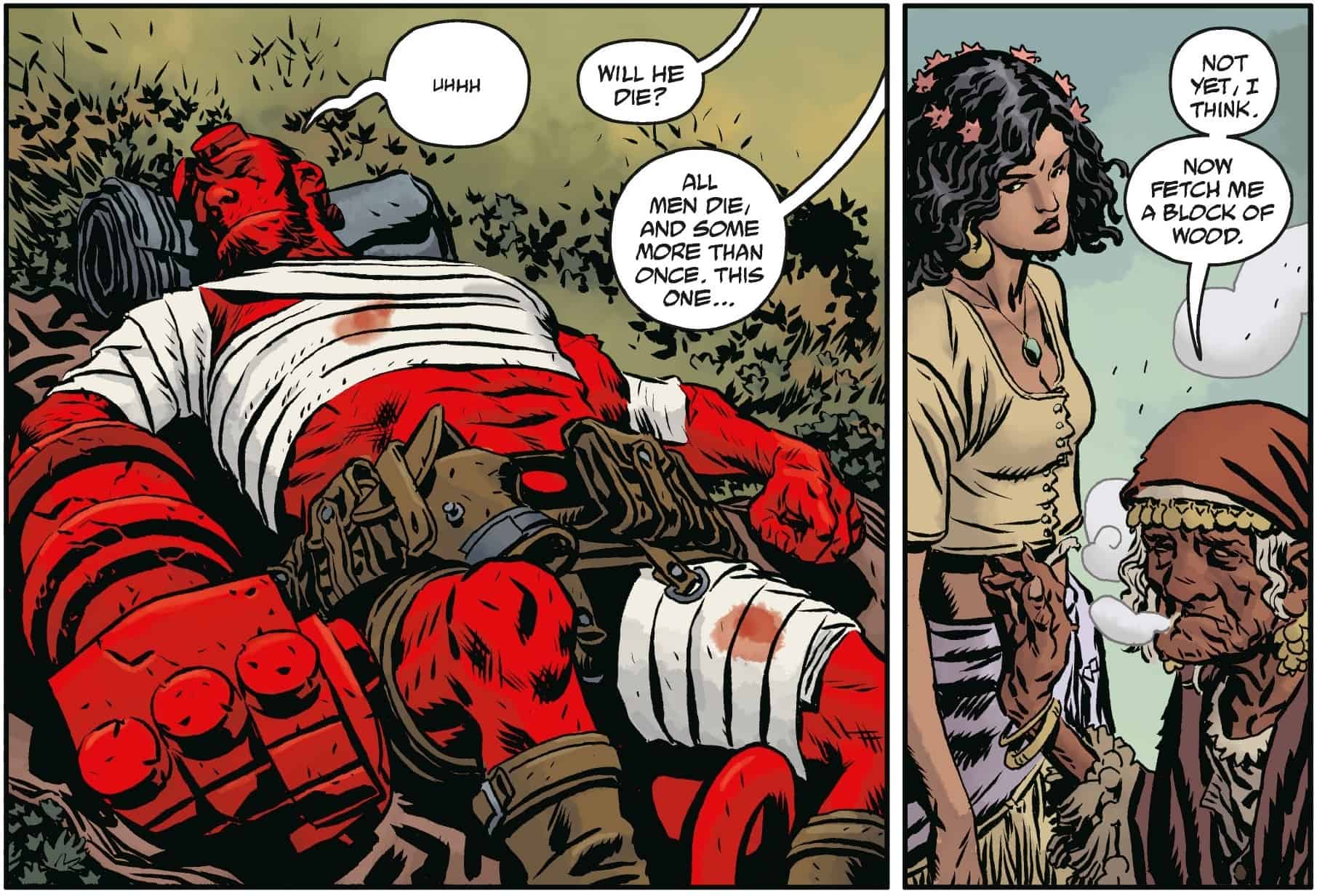 He is found battered and bruised by the local Roma mother/leader, who nurses him back to health while surreptitiously collecting a few drops of his blood. Using this to perform a puppetshow for his benefit she performs a re-enactment that would turn the best spin doctor green with envy, slanting the outcome in order to allow him to encounter the cursed man’s trapped mother. This rewinding of events enables him to complete the task the undead mother failed to do so many years before and enables him to free her soul, all of which keeps to the mythos of Hellboy with the magic and mysticism. This also has the knock on effect of allowing us to see how Hellboy is helped by other people for a change, and not just have him going into battle without any follow on from the event itself. 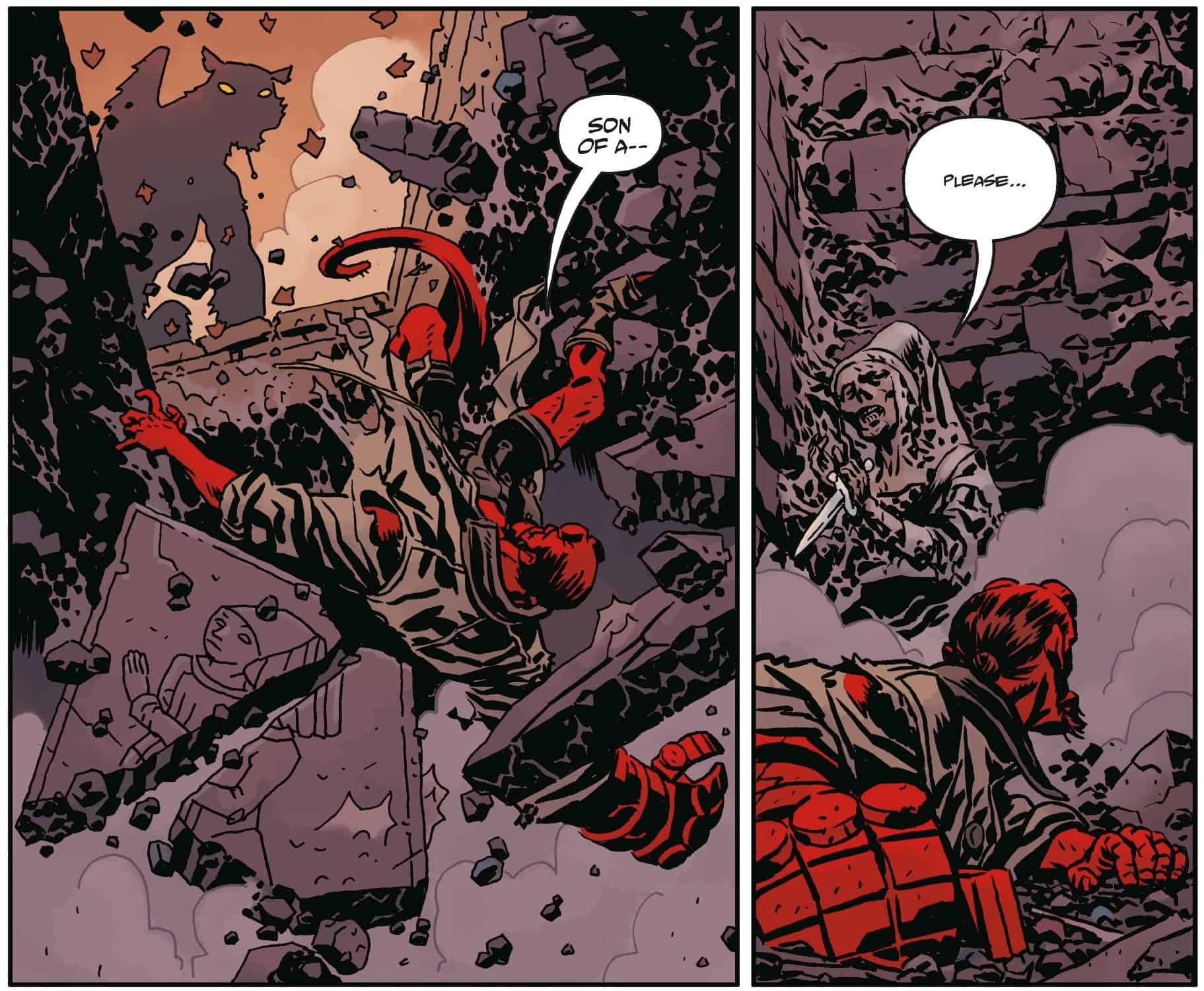 Not to mention the always present and perfectly pitched dark and edgy humor interwoven through the story. Firstly from Bruttenholm as he recounts the history of Costache Szilagy over the phone to Hellboy and remarks “shouldn’t have done that”. That comment alone set up the tone for the story and had me in stitches. But also as Hellboy describes to Bruttenholm the grisly findings that tip him off that things aren’t as they should be in Romania. Yup, this is a Hellboy story alright. 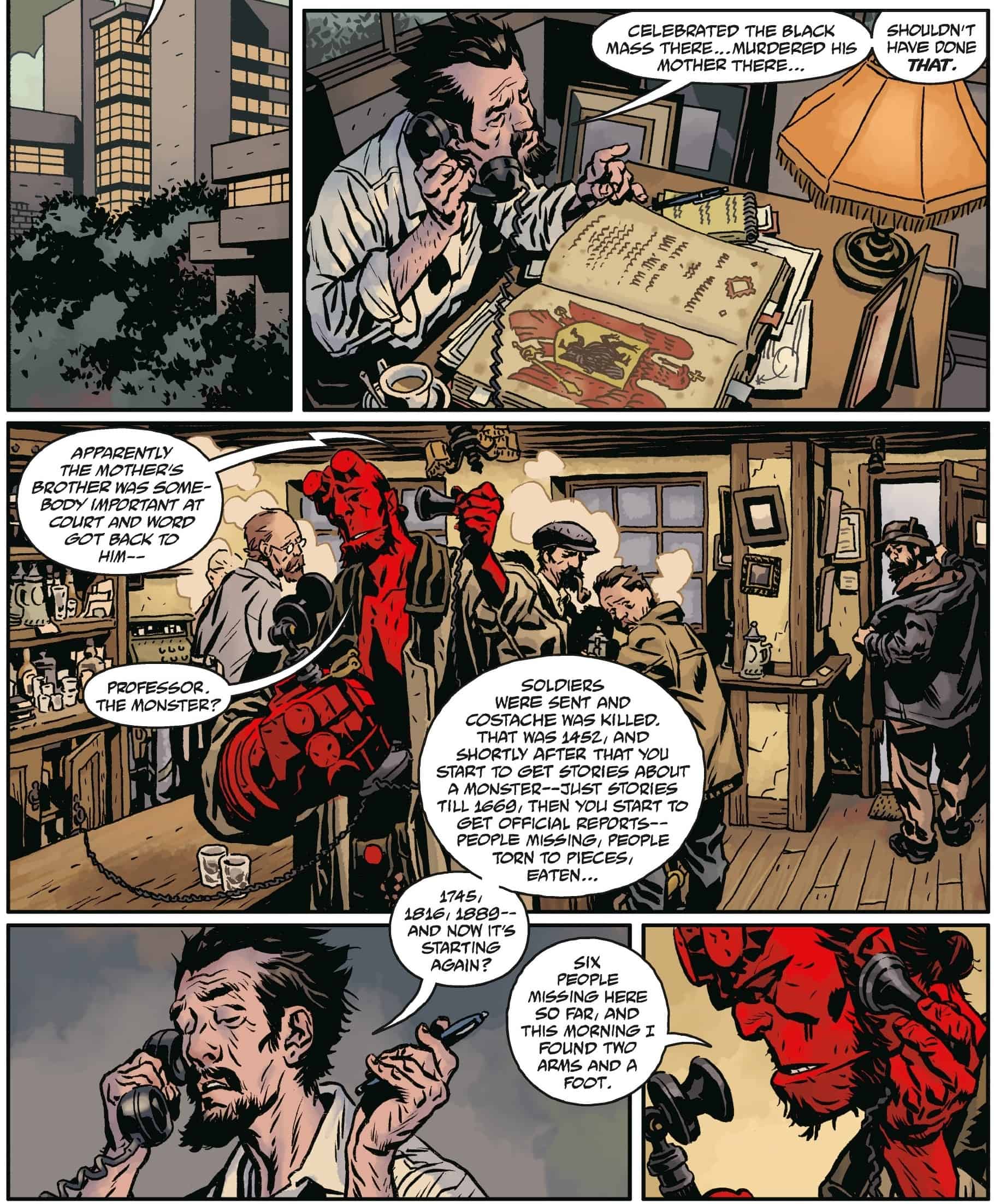 Characters: This is also something totally different as it doesn’t simply rely on Hellboy’s ability to throw a mean right hook, shoot the Samaritan or use his pitching arm as Kate noted in Wolves. It allows the trapped soul of Costache Szilagy’s mother to redeem herself and finally finish the task that she was unable to do so many years before. And in finishing what she couldn’t, Hellboy frees her spirit. On top of which the final words of the wise woman who saved him give a resounding validation to his status as hero, as her simple statement speaks volumes of his worth to the side of the angels. 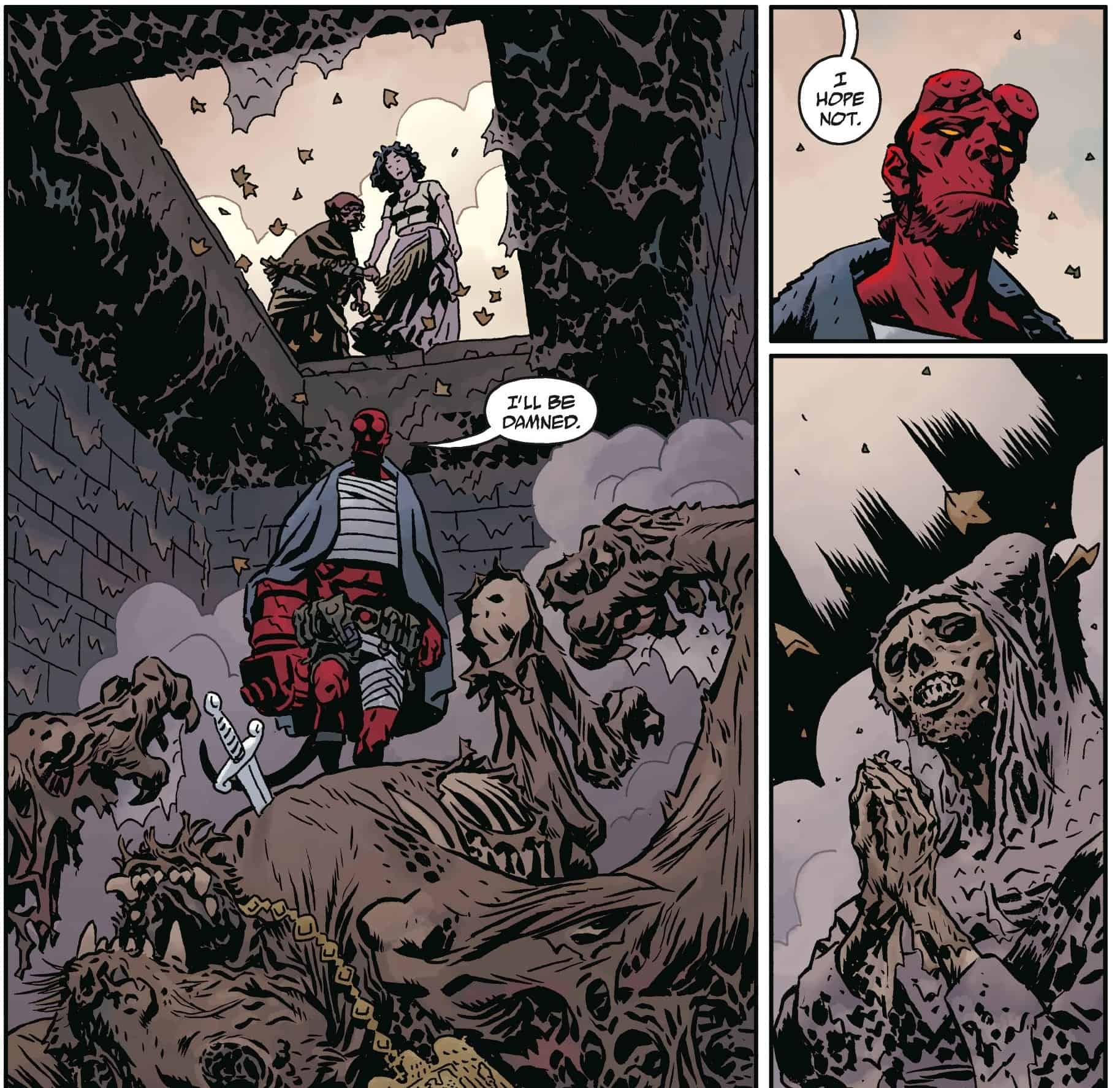 The second tale, or post script if you will, simply cements this assertion. As she goes on to tell him the story of a great hero, a virtuous man who is misjudged and wronged by another, she draws comparisons to Hellboy himself, alluding to the fact it is what is inside a being that is more valuable and important than what someone looks like. It almost seems her testament is a thank you to him for his efforts. And in her wisdom she sees what many can’t about the man in front of her without prejudging him. 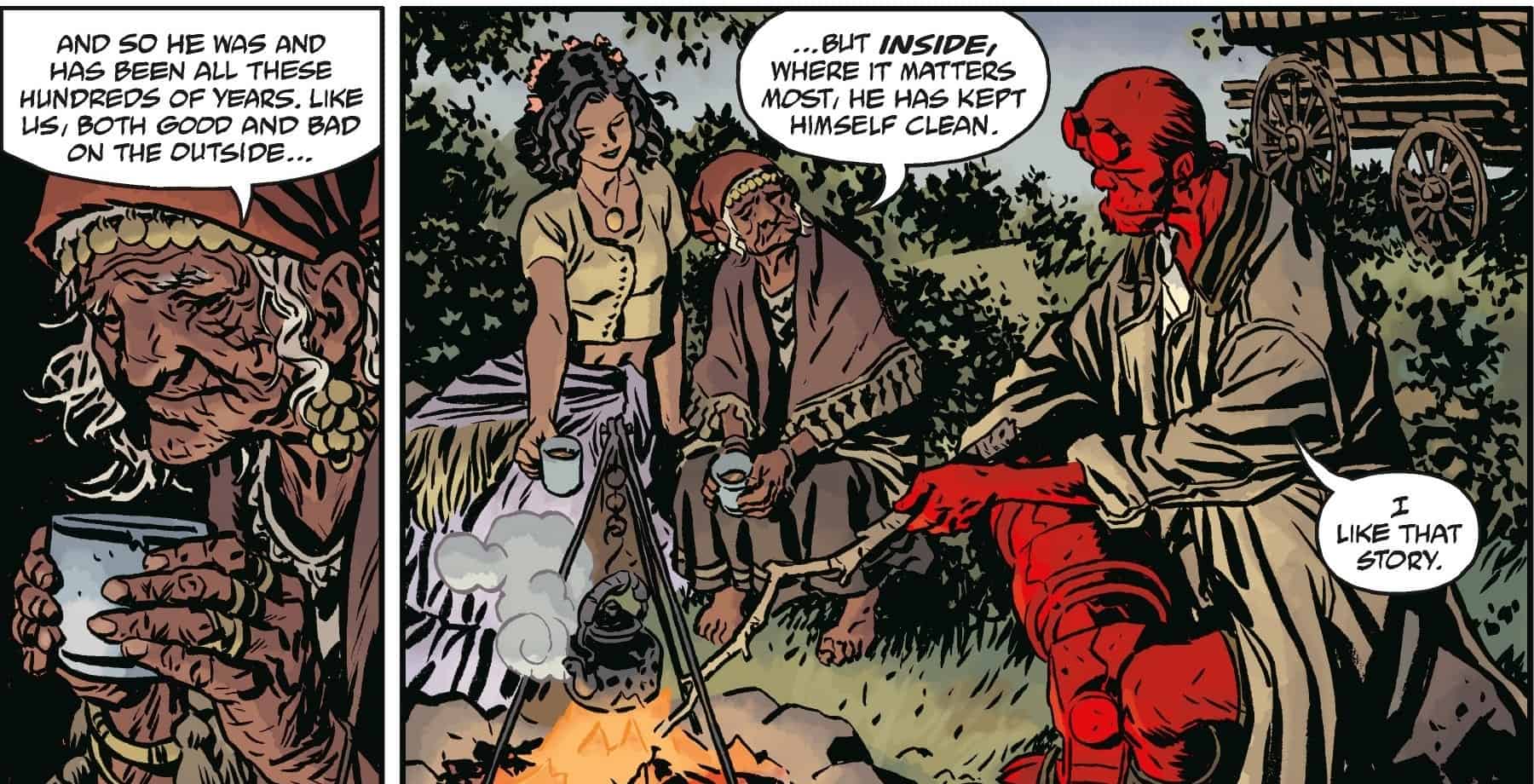 Art: Duncan Fegredo began working with Mike Mignola in 2007 and for six years he ostensibly became his ‘Right Hand of Doom’. Together they have collaborated on such memorable stories as Darkness Calls, The Wild Hunt and The Storm and the Fury, where Hellboy is revealed to be descended from King Arthur no less. So I for one was sad when Duncan completed his journey with The Midnight Circus in 2013. Thankfully Dark Horse Comics ensured the stars aligned for the big 25th anniversary milestone, by reuniting the pair for this venture. And with colorist Dave Stewart, also a staple of the world created by Mignola, the team is set. Fegredo’s artwork is arguably second only to Mignola’s iconic imagery itself within the Mignolaverse. And he once again manages to encapsulate all the wonder of Mignola’s flavor, while bringing his own voice to the world of Hellboy, right from the cover, which is stunning and evocative of the story and follows throughout the whole issue from the first page. 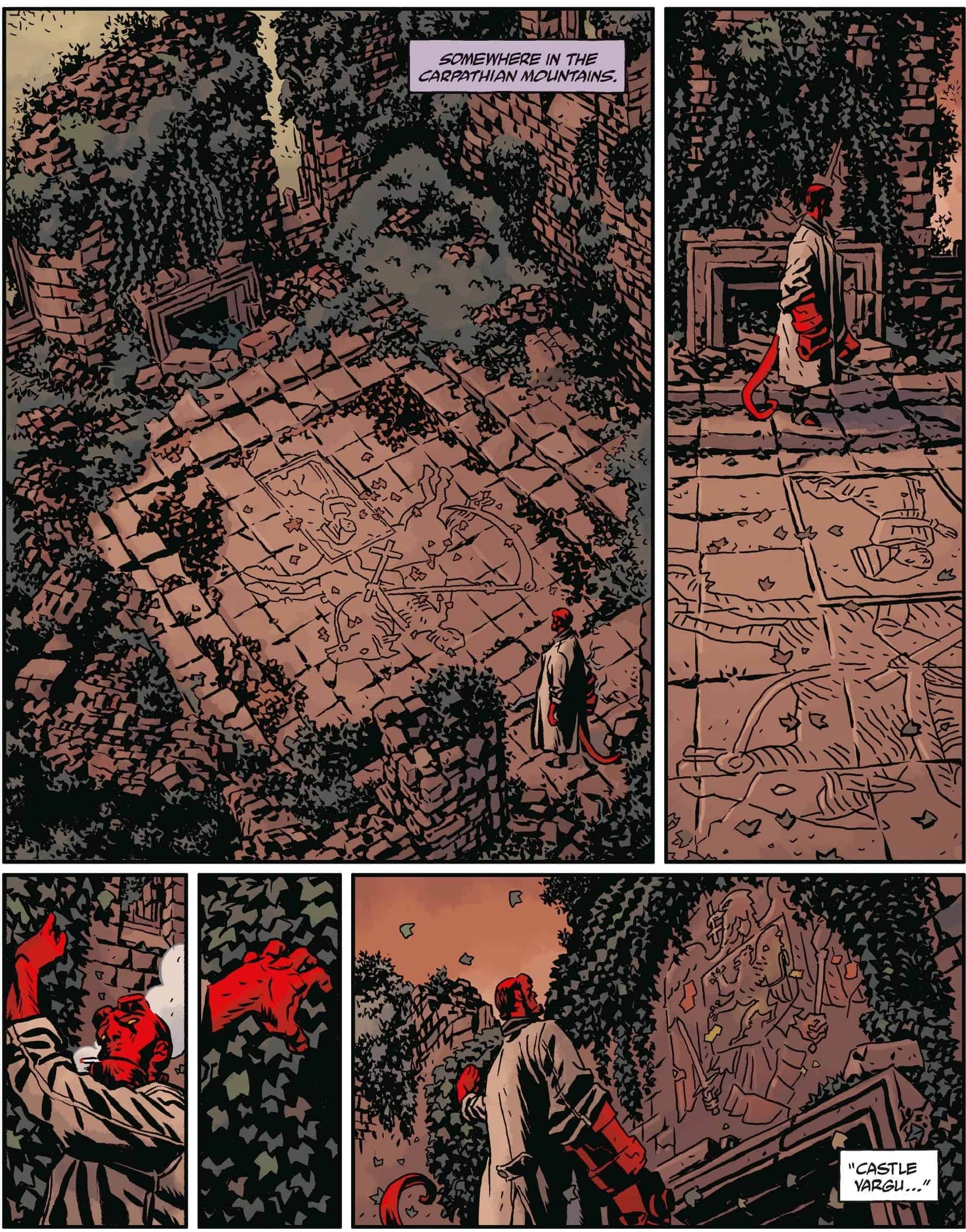 His past experience speaks volumes about his loyalty to the ethos of the Hellboy brand and it shows in every panel. This is not only the first issue in a new era for Hellboy and the Bureau, but it also marks Fegredo’s return to comics after a four year absence, having been drawing storyboards for Rogue One: A Star Wars Story and an undisclosed project for Pixar. And he has been sorely missed. Even without the Sturm und Drang scenario of fighting titanic monsters, just in the images of Hellboy in the company of the Roma there is some magic. Which is all perfectly fleshed out by Stewarts colors, giving it a warm and humanising feel. 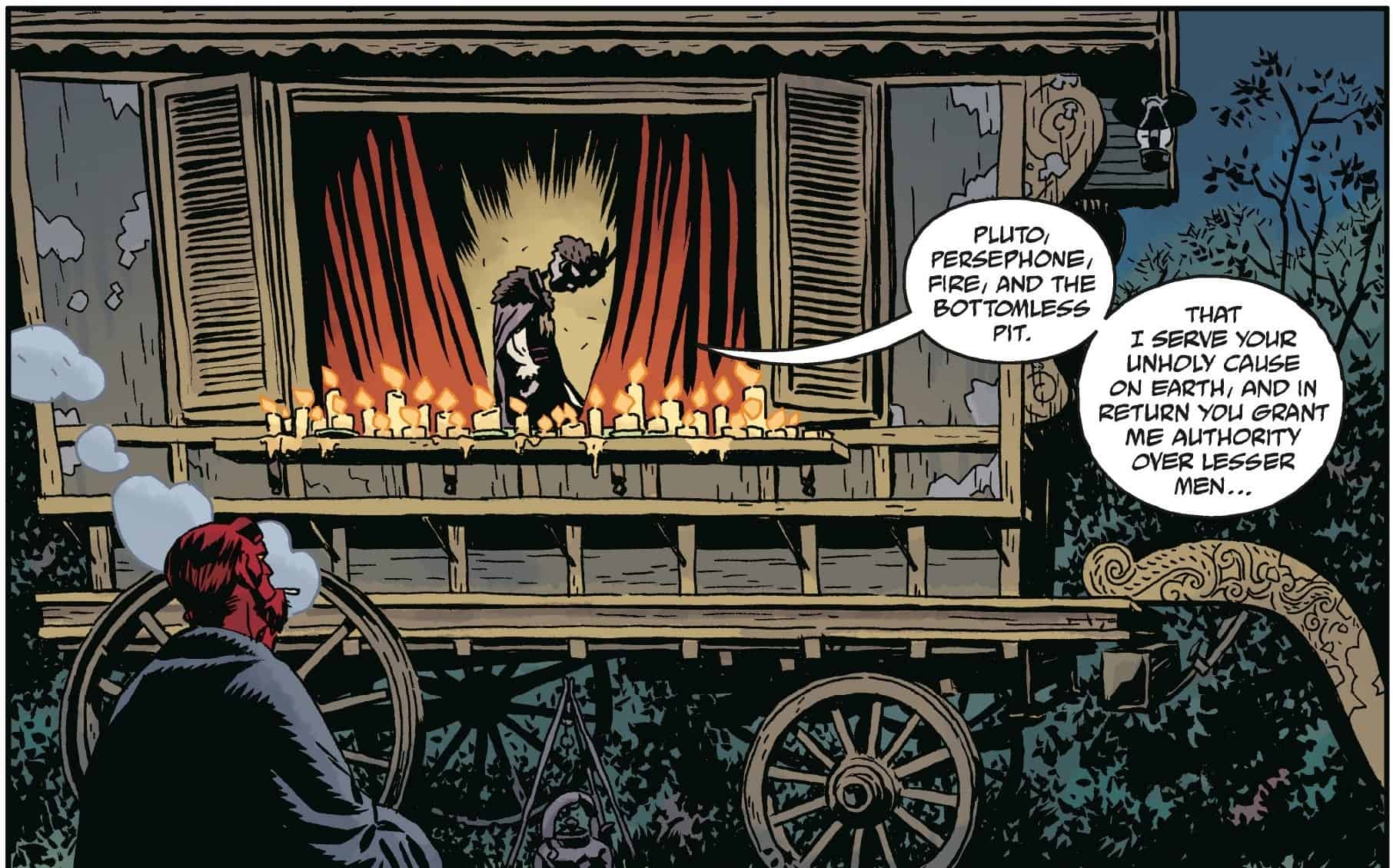 Set in 1962 The Beast of Vargu marks the first time an issue of Hellboy and the B.P.R.D. has jumped ahead in time, rather than conforming to the year-by-year format it has traditionally stuck with. This is usually a trait that sticklers for continuity like me cherish, especially in a timeline that is famously numbered within each front page to link in with the ongoing saga. But even so I do enjoy a departure from the standard run. So this is a refreshing change of tack, which sees Mignola break from disciplined rigidity and free himself up to tell a tale unconstrained by continuity. A perfect tale for the 25th anniversary. The year of Hellboy.

A wonderfully insightful look into the way Hellboy is seen by the Everyman, that gives credence to the phrase never judge a book by it’s cover.

Hellboy and the B.P.R.D. – The Beast of Vargu: Some Assembly Required