Hellboy and the B.P.R.D.: The Secret of Chesbro House #1: Breaking the Curse

Hellboy and the B.P.R.D.: The Secret of Chesbro House #1 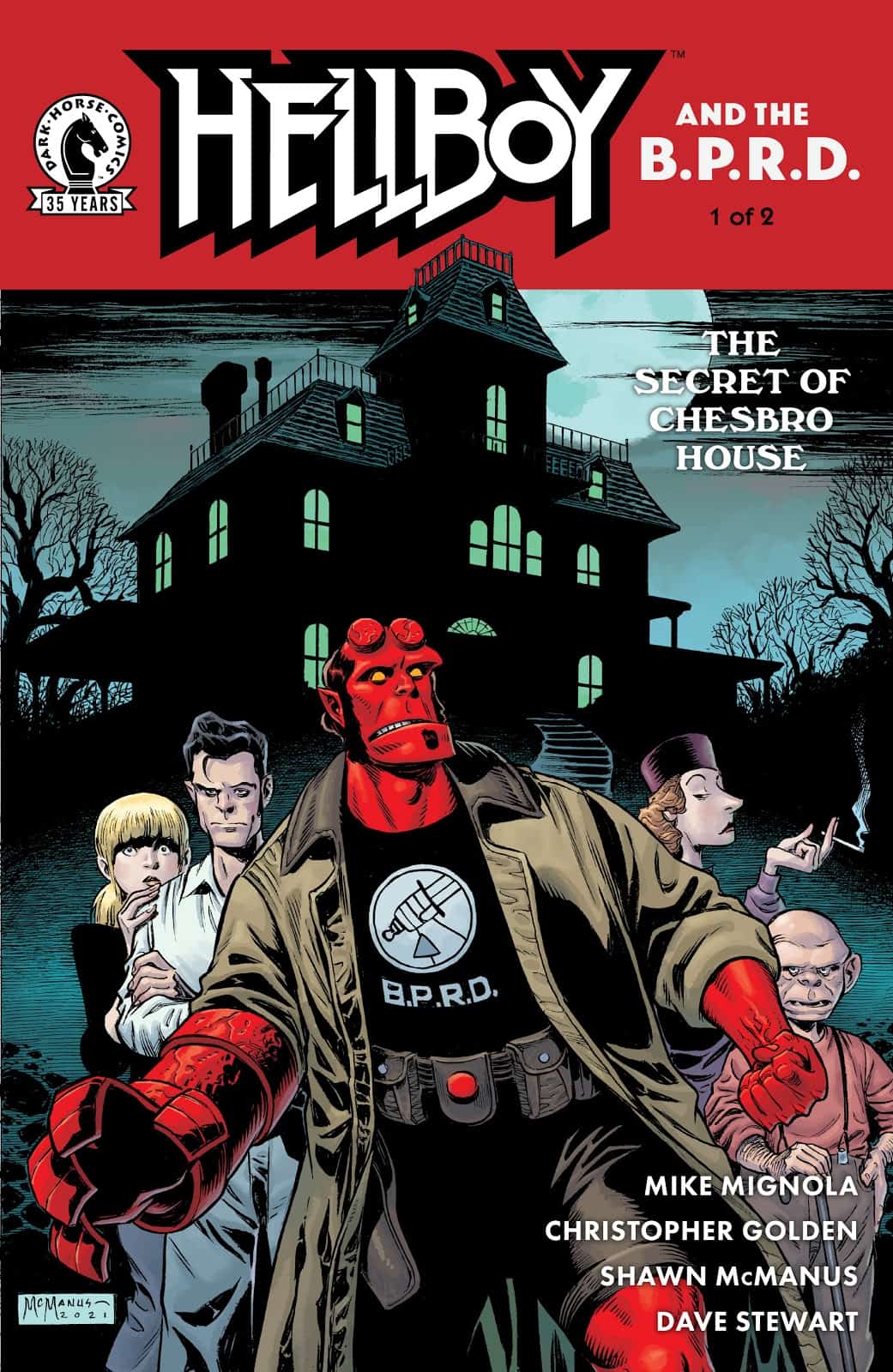 Hellboy works with a psychic to clear a haunted mansion for auction. But the ghosts in residence aren't quite ready to go gentle into that good night, and the answer may lie in a connection with the living world . . .

First of a new two-part story.

With Hellboy and the B.P.R.D.: The Secret of Chesbro House #1 readers are treated to a few expected delights for such a story from this creative team.

A creepy and vague psychic to speak to the ghosts of a haunted house? Check.

Some unsuspecting people to be scared out of the wits when the evil shows itself and Hellboy tries to punch it? 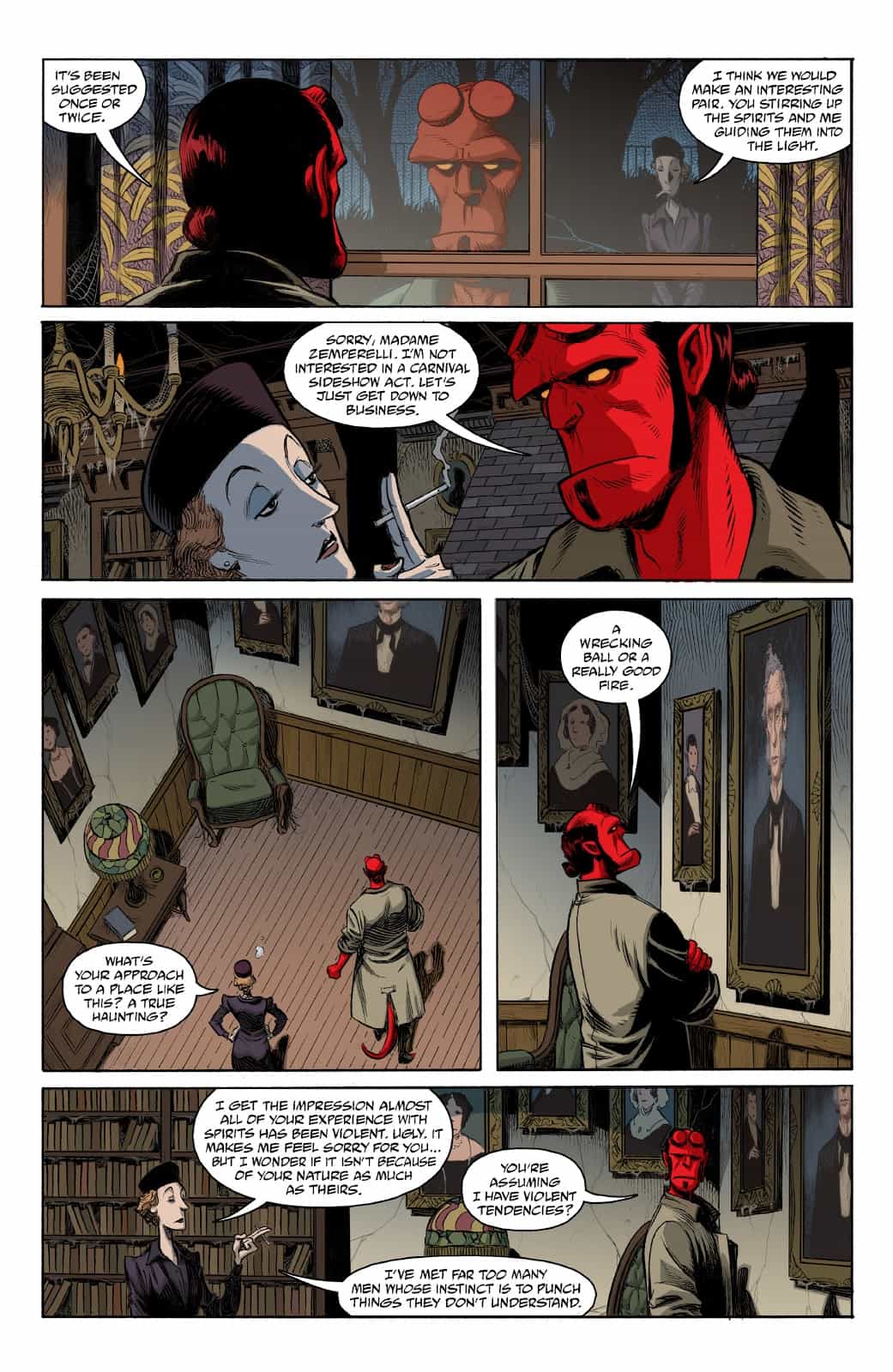 A haunted house just feels like a natural place for a Hellboy story and something you can never go wrong with. And when you have two writers like Mike Mignola and Christopher Golden teaming up for any comic, you know it’s going to be worth your time. Coming as a surprise to no one, Hellboy and the B.P.R.D.: The Secret of Chesbro House #1 is a near perfectly executed first issue that takes what we know we already know we’re going to love with a tried and true formula and brings just a dash of surprise in to keep us interested.

This is a classic Hellboy adventure with that signature dark twist that always makes us want more. While it might not be the most revolutionary or even crucial story in the character’s long history, this issue represents yet another in a series of minis or one-shots that show just how much fun we can still have with Hellboy. It’s a condensed story that uses a haunted house as a catalyst to carry us through a new entanglement that Hellboy can’t punch his way out of, but will certainly try regardless. It’s a timeless type of story that leans heavily into what works for the character and you know what, I loved it for that.

Maybe at one point years ago this would’ve been a four issue mini or even longer, but the pacing that only two issues forces works in this stories favor. Haunted houses can fall into predictability and moving through the steps just a bit more quickly allows for a more enjoyable reading experience overall. The structure is tight, even making room for a flashback without losing it’s momentum, and leaves with a cliffhanger that leads wonderfully into the next and final issue. But for all of it’s clear storytelling prowess within such little room to breathe, we also find this first issue not quite doing enough to surprise us.

The Chesbro House house is home to a curse, fallen upon by “the usual stuff” as Hellboy would put it and from what we discover it feels a little too much like the usual stuff that it will take to break such a curse. The setup is so well executed and there is just the right flair of grim assistance and dry humor that makes the issue so memorable but the second issue will have to capitalize on this narrative weight to give us something that makes it stand apart from so many other Hellboy hauntings.

While the narrative is very straightforward, the artwork from Shawn McManus and Dave Stewart does take some interesting chances that make the issue feel different. This helps us as readers to not concern ourselves too much with the thought of possibly knowing where the story may end up because it’s such a visually distinctive approach. Hellboy himself looks leaner and it’s immediately noticeable but in a good way. McManus brings a unique approach that is easy to appreciate and Dave Stewart’s always iconic coloring keeps things familiar.

Clem Robins has found himself on quite a few Hellboy comics especially lately and in this issue we really see his work on lettering coming into their own. They guide us at just the right time, helping us to linger when we might not want to for fear of what’s to come and easily navigate the exposition when we need to know more. It’s great to see such synergy between everyone in the creative team helping to elevate what could have easily been a rather mundane comic.

Hellboy and the B.P.R.D.: The Secret of Chesbro House #1 is a comic for any fan of the character either longtime reader or those with just a passing interest. It’s highly new-reader accessible and requires almost no prior knowledge to completely enjoy and it hits all the right notes for fans always eager for more Hellboy. While the premise might not leave you guessing as often as you typically want, there is no denying this is yet another great comic in the ongoing franchise of Hellboy.

Hellboy and the B.P.R.D.: The Secret of Chesbro House #1 leans heavily into the tried and true formula for what makes a great Hellboy story and gives readers yet another ghoulishly good comic to enjoy.

Hellboy and the B.P.R.D.: The Secret of Chesbro House #1: Breaking the Curse