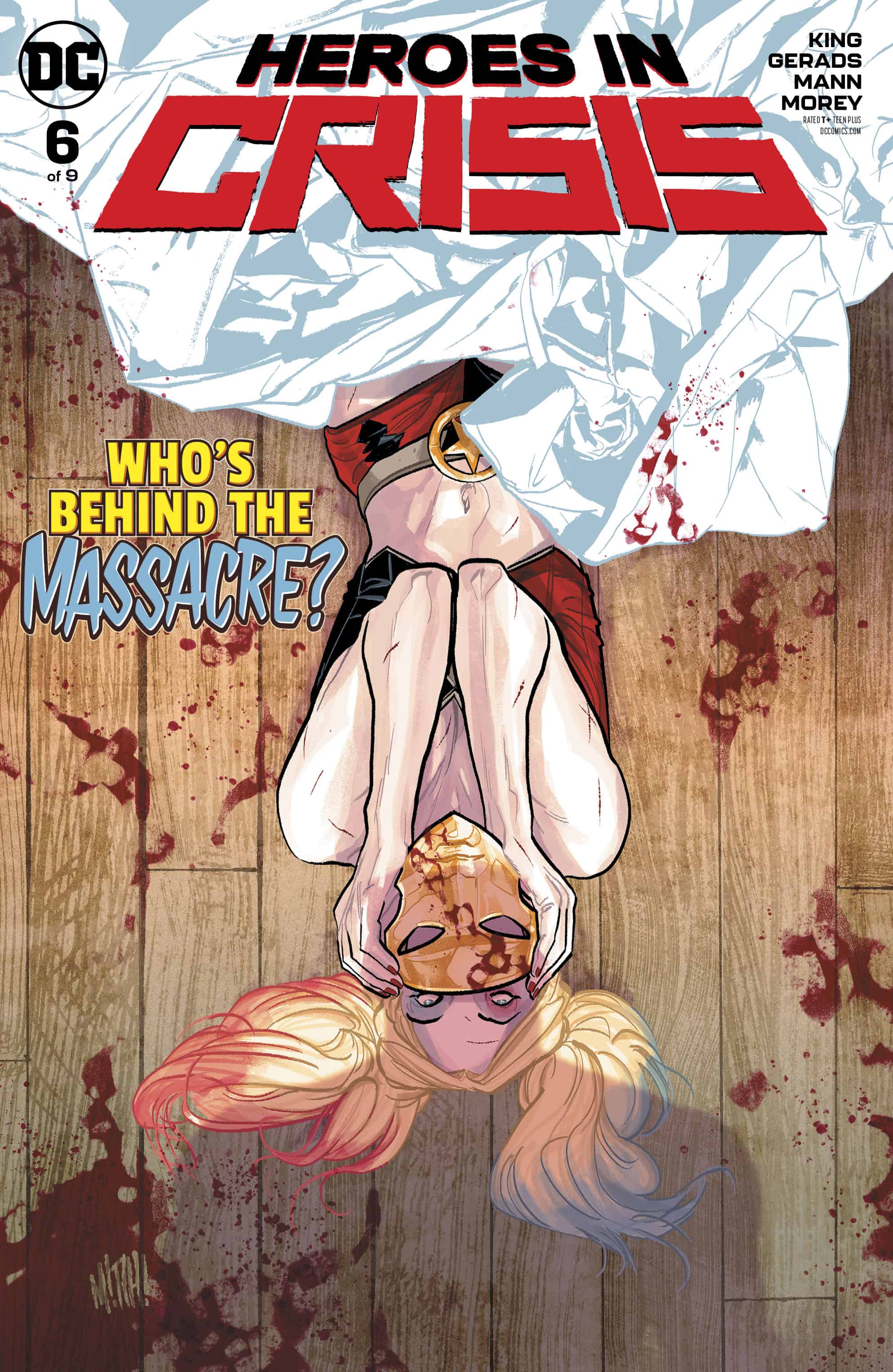 We see more of the inner workings of Sanctuary as the focus shifts towards Wally West, Harley and Poison Ivy, and Gnarrk. While Harley and Pamela find solace in their unique friendship, Gnarrk waxes philosophical on life. In the meantime, we follow Wally through his soul-crushing attempts to understand how to move forward with the knowledge that he has returned but without his family (see Flash War for details). 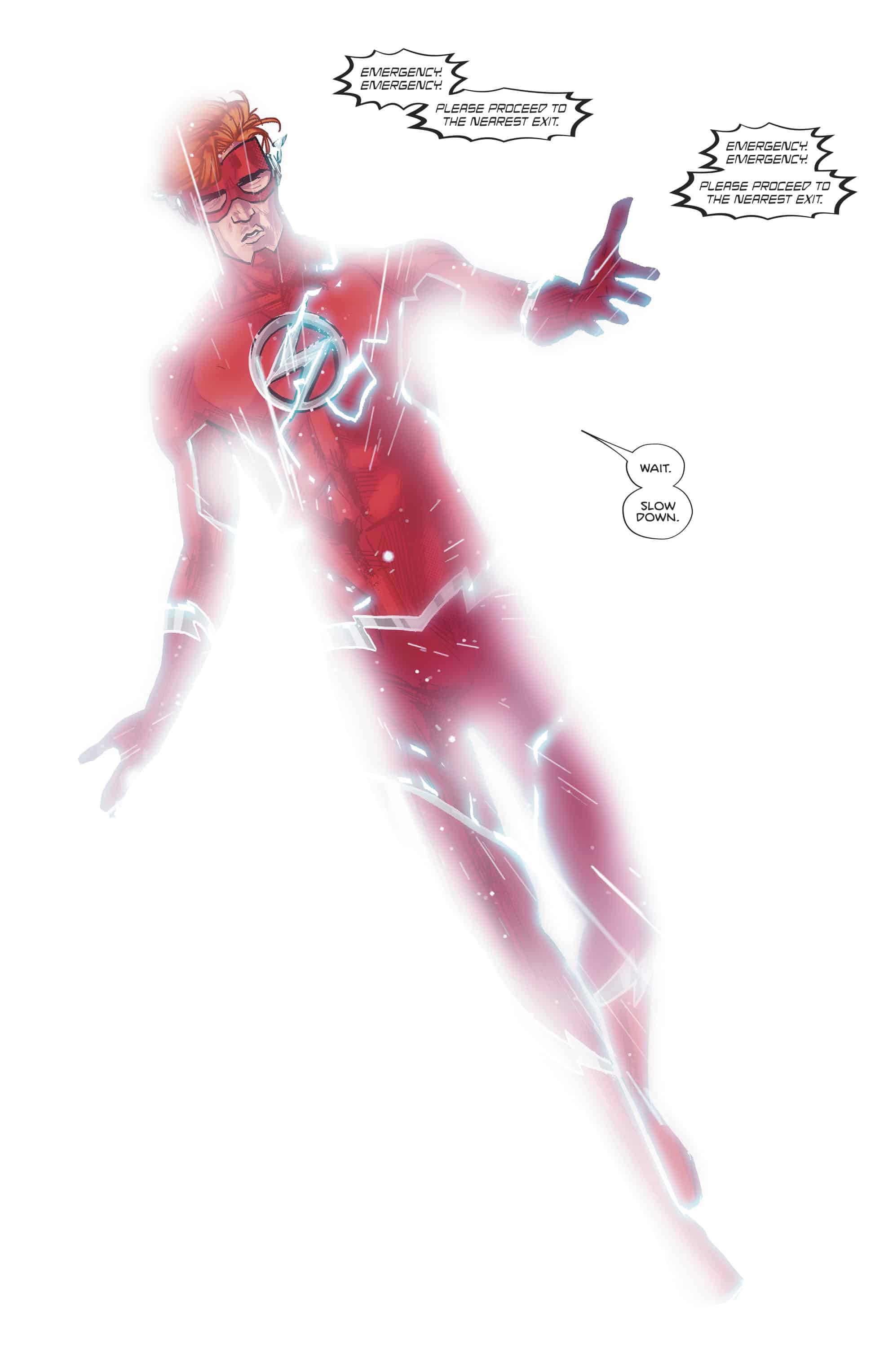 The emergency is sounded and we see the snippets of the aftermath of the attack on Sanctuary. Wally is seen cradling the body of Roy Harper and Booster Gold arrives and kills him. Harley watches on from the background, having never actually been admitted to Sanctuary, and is spared. 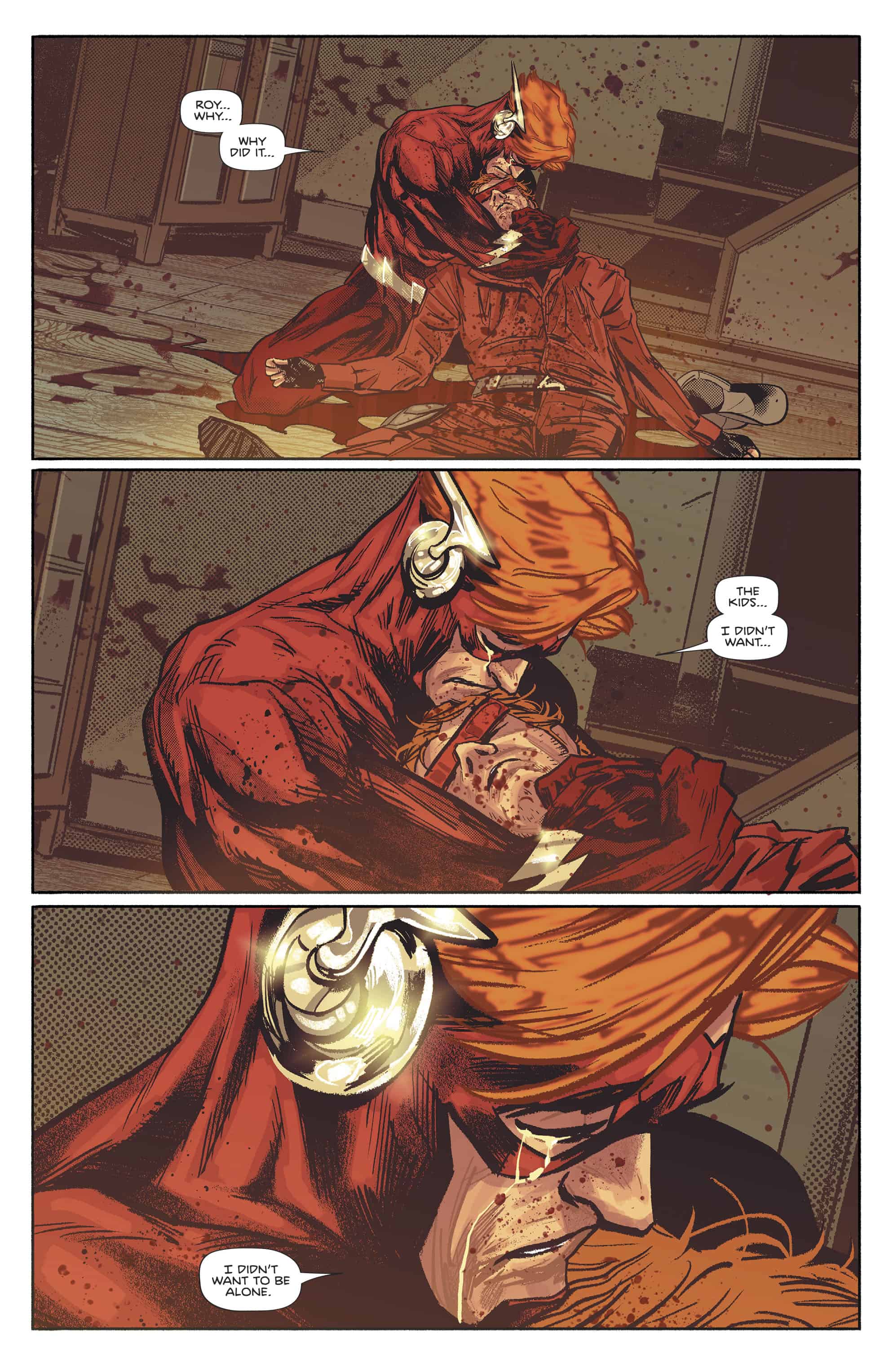 My views are my own and in no way reflect the overall views of Comic-Watch.com.

If my reading of this issue is correct (and no personal reading is wrong) it would appear to me that the Sanctuary Murderer has been discovered to be Wally West. While it is not explicitly stated, the clues all seem to point in that direction, from the time anomaly revealed last issue (Wally is five days older than he should be) to the image above of Wally asking somebody to “slow down”, perhaps to a victim or perhaps to himself. If that holds true, Booster killing Wally makes perfect sense. It is still possible the killer is Booster, of course, but it is seeming more and more unlikely at this point.

So if that reading is correct, Wally, a stalwart hero who has been frequently minimized since the dawn of the New 52 era, went on a mass murdering spree as a result of his grief over the loss of his family. On the surface, this appears to be a twist for the ages, but on closer inspection it is emblematic of a disturbing trend in the greater view of the DC Comics writing and editorial staffs.

Don’t get me wrong. I love DC. I have been reading DC Comics my entire life. My dream job is to be an editor at DC. But there comes a point in which truth must be aired regardless of how painful that truth is. And in this case, that truth is that DC Comics has gotten lazy of late, and the run afforded to Tom King is the greatest indicator of that. In a vacuum, King’s run on Batman and his work here in Heroes in Crisis work fine, but comics are a medium built on inter-connectivity — on continuity. When King distorts voice and characterization, as he does so frequently to suit his own needs, he operates akin to a cancerous tumor, destroying the connective tissue that surrounds these characters and binds them together. Example: we have seen Gnarrk recently in the pages of Titans #15 (written by Dan Abnett) where he helps Mal Duncan on his quest to return Bumblebee’s memories to her. 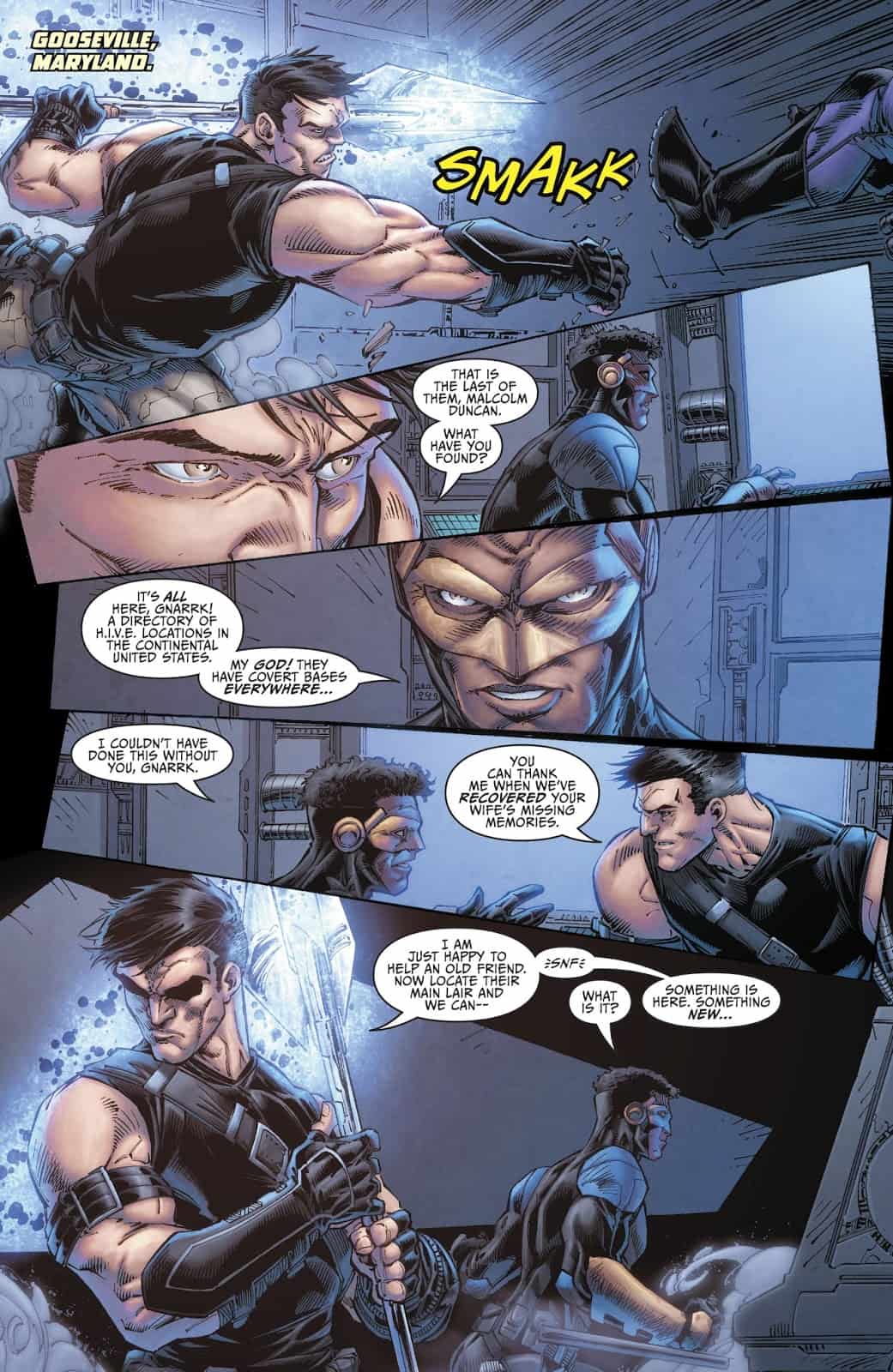 In contrast, less than a year later, King gives us this version of Gnarrk: 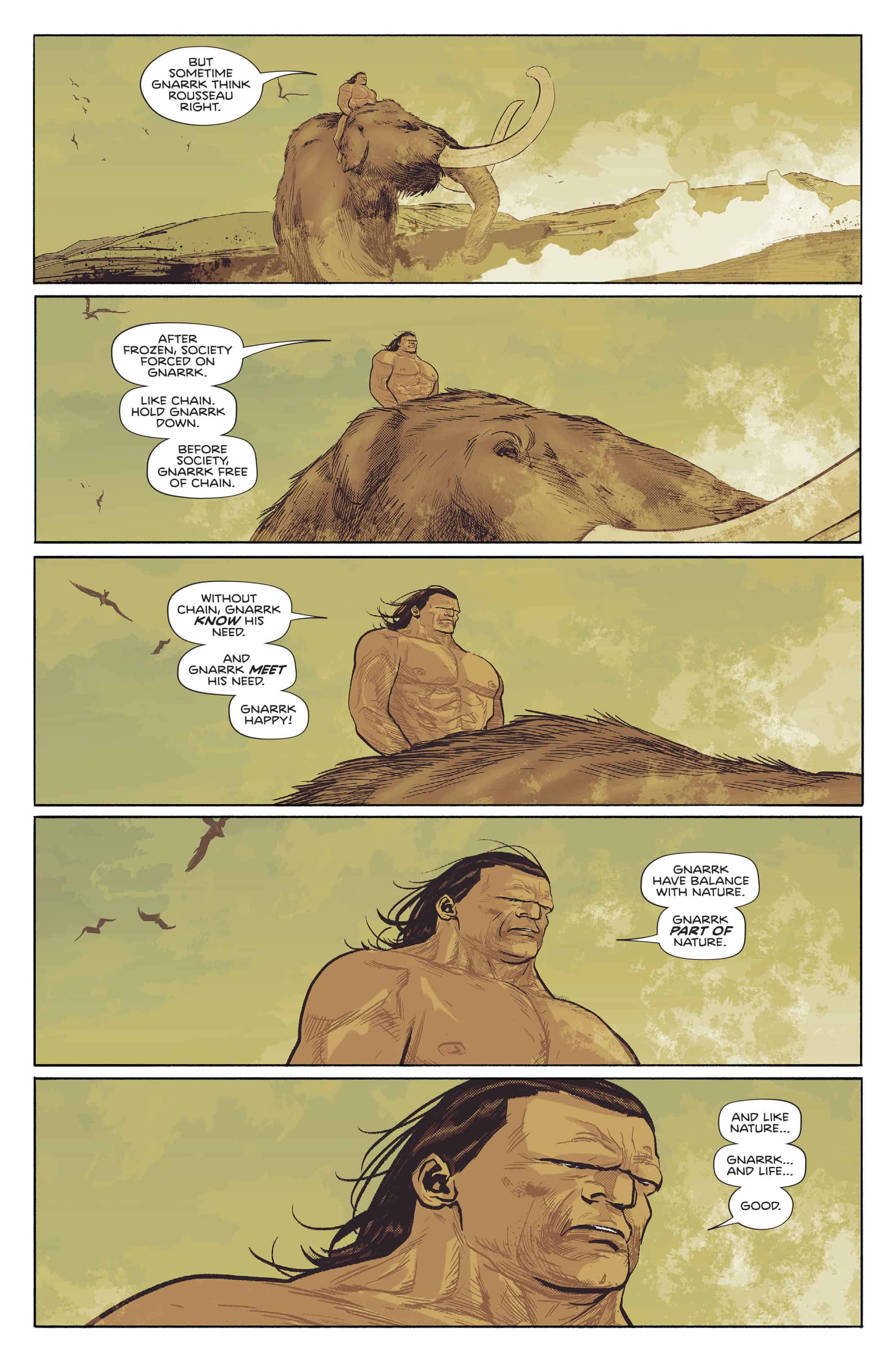 Gnarrk is nothing more than a tool to King in order to convey his message and in making him so, King shows an absolute disregard for the work of Abnett. King operates in a bubble except for the fact that the bubble is an illusion. The ramifications of his story-telling reach across the voice and corrupt the very notion of a shared universe. Also of note, you’ll notice that Snyder wrote Batman into a full-body cast during his current run on Justice League, yet no other book featuring Batman across the DCU (including King’s Batman) addressed it.

It is not all King’s fault, however. Recently, one of our competitor sites released an article discussing the possibility that DC plans to cut down on titles in order to more strictly focus on continuity between the many titles being published. The veracity of this account is under attack, but it does point at the notion that continuity in DC Comics at this current point in time is a problem that has been recognized by many. The blame for that problem lies with the editors. King has been allowed to run roughshod over characters by editorial staffers who don’t have the wherewithal to stop him from doing so. There is no accountability.

And that must change if DC Comics is going to thrive in the current climate.

I have rated this book as low as I have in order to ensure it stays an outlier on the various sites that compile reviews. In reality, my aggregate score would be somewhere around a 5/10 but I acknowledge that the most looked at reviews tend to be the lowest and the highest and I want this review to be looked at because of the issues addressed here.