History of the Marvel Universe #1 (of 6): Genesis

History of the Marvel Universe #1 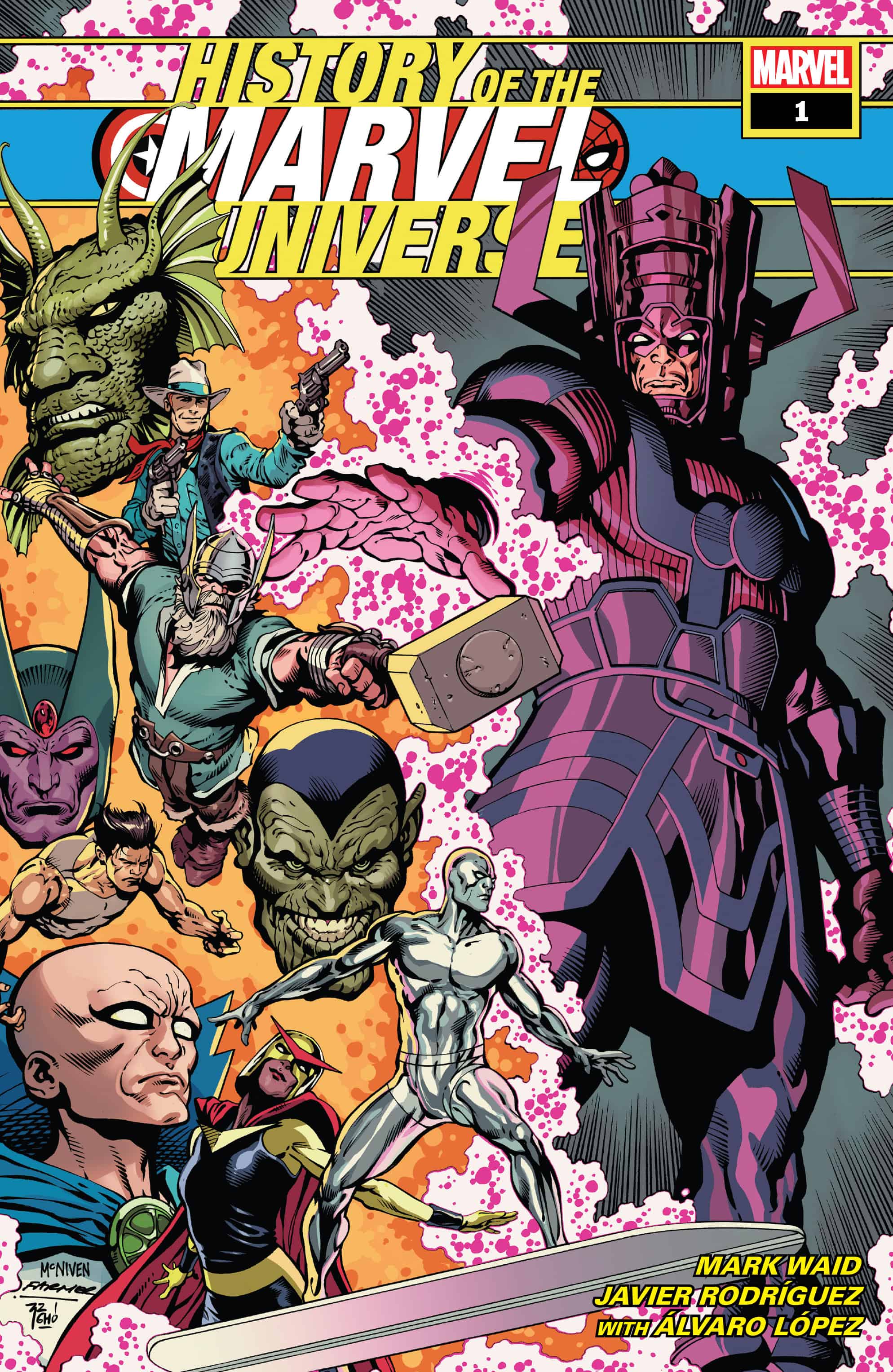 Far, far in the distant future, great Galactus and the now-immortal Franklin Richards await the end of the universe. With only a few vestiges of life left in the entire cosmos, Franklin begs Galactus to tell him everything - the entire universe's history - mattered in the face of ultimate entropy. 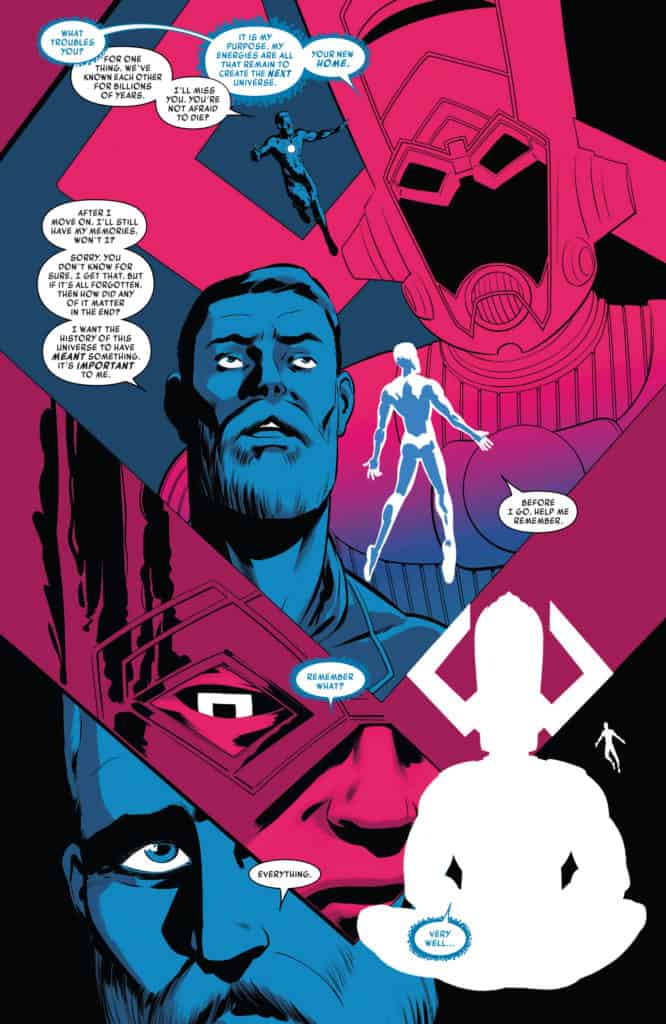 And so, Galactus acquiesces... and tells the tale of the most marvelous universe ever known - from the very beginning! 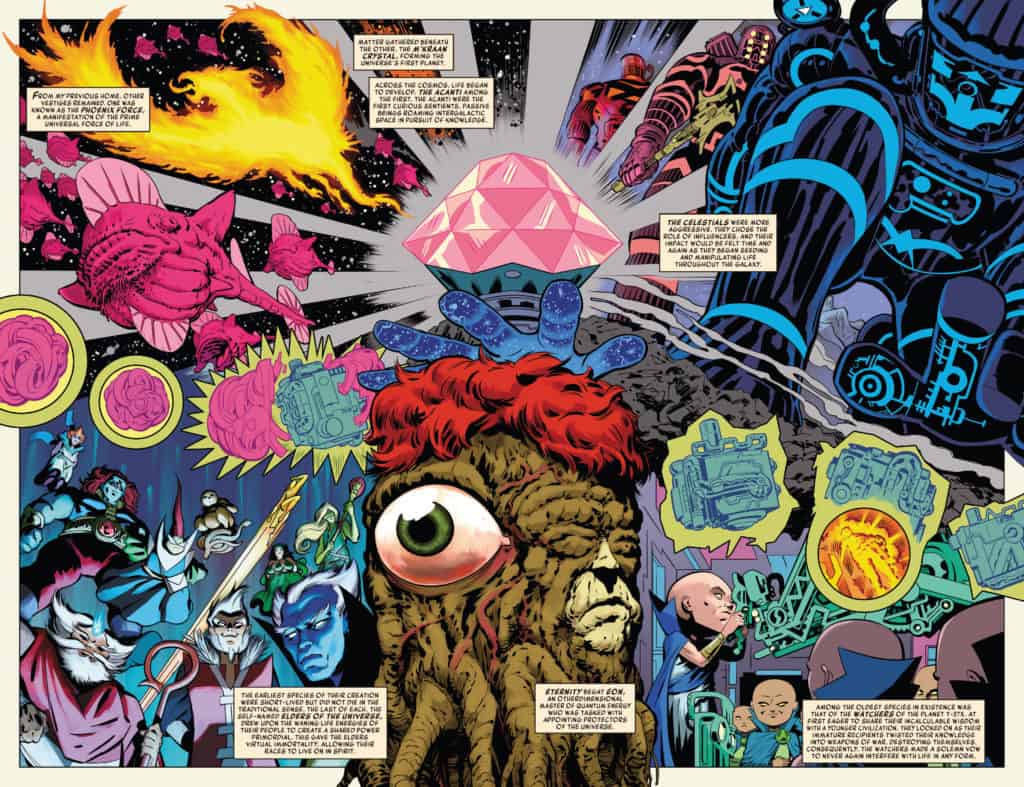 All mythologies have a creation story. And if superheroes are in fact today’s modern myths (and they are!), then The History of the Marvel Universe is ground zero for this particular cosmology. Pity scribe Mark Waid who, though up to the task, has the unenviable chore of not only making sense out of Marvel’s 80-year publishing history, but also turning it into a cohesive narrative that’s actually readable. That is a lot of history, backstory, retcons, reboots, and flat-out characters to line out in one fell swoop. And, to reiterate for emphasis: to mold into an actual, cohesive, readable story.

But if you must undertake a project of this nature, of this sheer magnitude, you call one of two guys to write it: Kurt Busiek or Mark Waid.

Waid must have answered the phone first.

Both writers live, breathe, eat, and sleep superhero history (for either of the Big 2, really), but on top of their scholarly attributes also have the authorial skill to rise to the challenge. But it’s Mark Waid who answered the proverbial Bat-Signal, and for the first issue, he mostly succeeds at the task at hand.

Of course, the story moves like Quicksilver on steroids. It has to, because Waid has literal millennia of events to cover in just twenty-two pages. So most plot points get only a cursory glance (no more than one or two text boxes), and then it’s off to the next big event in the very next panel.

This sort of approach is reductive but necessary. As well-versed in Marvel lore as he is, Waid could have filled an entire first issue with the events of the first four or five pages alone. Older fans may bristle at the inclusion of some more-recent continuity additions such as the Avengers of 1,000,000 B.C.E. at the expense of older nuggets, but any long-time Marvel reader should know that by its very nature, Marvel’s continuity is a tricky beast indeed. Hitting the high points is necessary if for no other reason than to make the story palatable and non-contradictory.

But that doesn’t necessarily translate into the smoothest read. With such little time dedicated to each individual plot point, the story moves at a pace that could be called breakneck at best. That coupled with the fact that it is literally nothing more than exposition once we move past the framing sequence makes for a very herky-jerky reading experience. Both veteran and rookie readers will likely feel at least a little exhausted by issue’s end, just by the sheer wealth of knowledge crammed into such a short allotment of space – but also frustrated that so little time gets devoted to their favorite whatsits.

Fortunately, Waid has an expert art team helping him with the heavy lifting. Javier Rodriguez and Alvaro Lopez may not be home names (yet), but they’re more than up to the task of lavishly illustrating Waid’s tale. The splash pages and double-spreads are genuinely stunning to behold, and worthy of their own epic nature. The colors, bright and vibrant, appropriately evoke a certain sense of Kirby-ness about them – big and bold and in the reader’s face, but distinct. Rodriguez’ color palette is the perfect fit for this series, as are his poster-worthy page layouts.

If there’s one stumbling block on the art side, it’s that certain characters’ features look a little soft and almost cartoony upon closer inspection, which contrasts with the rest of the art. The Eternals in particular look like a cross between the Legion of Super-heroes and a ’70s Hanna-Barbera cartoon. But in the grand scheme of things, it’s a pretty minor quibble.

But with all that it’s trying to say and accomplish, the biggest unanswered question at this point is: just who is this comic for, exactly? Sure, it’s a synergistic tie-in to Marvel’s year-long 80th-anniversary birthday blowout, but beyond that – why now? Why did this story have to get retold? Sure, it’s been awhile (over three decades, in fact) since the last time Marvel attempted to chart the course of its own history, but given just how much space the first issue alone tries to cover, you have to wonder at Marvel’s logic. As I stated above, older fans will surely find fault with some of the older lore that’s neglected (or, heck, even just the whole dang multiverse), and newer fans are getting short shrift by what’s left out and won’t even know it. That might be part of the calculus – to induct a new generation of fans to the grand history of the Marvel (non-cinematic) Universe – but will it be at the expense of the old? Though the answer is elusive for now, I suspect as next issue moves into the “Marvel Age” proper (“Hurry up and get to the good stuff!” exclaimed some editor), those answers will begin to come to light. For now, though, one heck of a pretty-looking comic will have to be enough.

Though rushed in its ultimate execution, History of the Marvel Universe #1 is a gorgeous-looking book that might be more for the consumption of the masses than hardcore, longtime fans. That said, it's still worth checking out, if for no other reason than to tip the hat at Mark Waid's meticulous research and the magnificent art that accompanies it.

History of the Marvel Universe #1 (of 6): Genesis