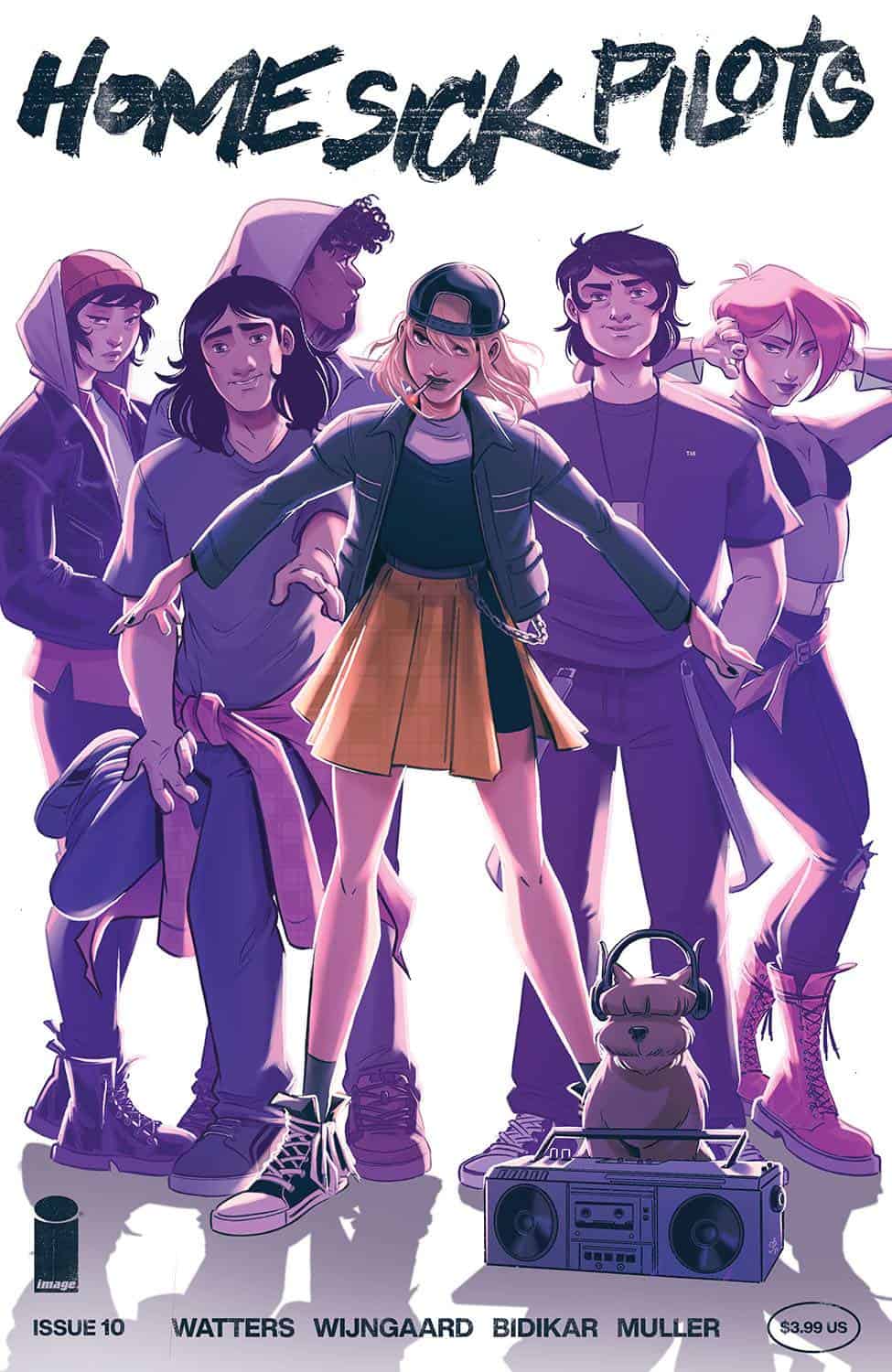 Meg has had enough and has powered up project Disruptions ghost powered mech, but the ghosts that power the "Nuclear Bastard" and Megs own guilt/hate might be too much for her to control. She is on her way to find Ami and the Home Sick Pilots. Ami has to make a decision will she got back to the Old James House or run and hide forever in Home Sick Pilots #10?

Home Sick Pilots #10 had a little bit of what I wanted in the story and a lot of what I did not want. If you think the big battle between Ami and Meg is in these pages. Sorry for the spoiler but it gets held off for another issue. If you wanted to read another long diatribe’s about America’ wrongs, punk bands and selling out then you get more of that.

Look, I know Dan Watters is trying to make a thematic point here with these atrocities in America , ghosts and what not. He has done it a lot throughout these last few issues. It has not not worked, but also for a book about a giant haunted house that is powered by ghosts grows arms and legs and fights other ghosts and is about to fight a giant government built robot that is also powered by ghosts, I would like it to be a little more tongue in cheek. It is hard to take all these diatribes seriously or not to be a little eye rolling. Now I am not standing up and saying “keep politics out of my comics!” or any crap like that, certainly put them in there but, make it not feel so awkward.

Home Sick Pilots #10 does have some fantastic countdown pages to the big fight. Let me tell ya on the first one I was hyped, but by the second one I realized “oh there are not enough pages for this fight to happen in this comic.” Then “crap they are going to stretch this out for another issue.” That was first initial thought process while reading the issue, which is not a good thing. The pacing of this series as a whole has had issues and this whole arc in general has felt like it has gone on way to long and really not given us good story information.

Look, I know there are a ton of complaints there, Home Sick Pilots #10 did have some high points. The connection between Ami and Buzz is fantastic , Watters has some wonderful dialogue between the two toward the end of the issue. Rip also finally comes back to his senses and we finally get some resolution with him which I hope carries over to issue #11. 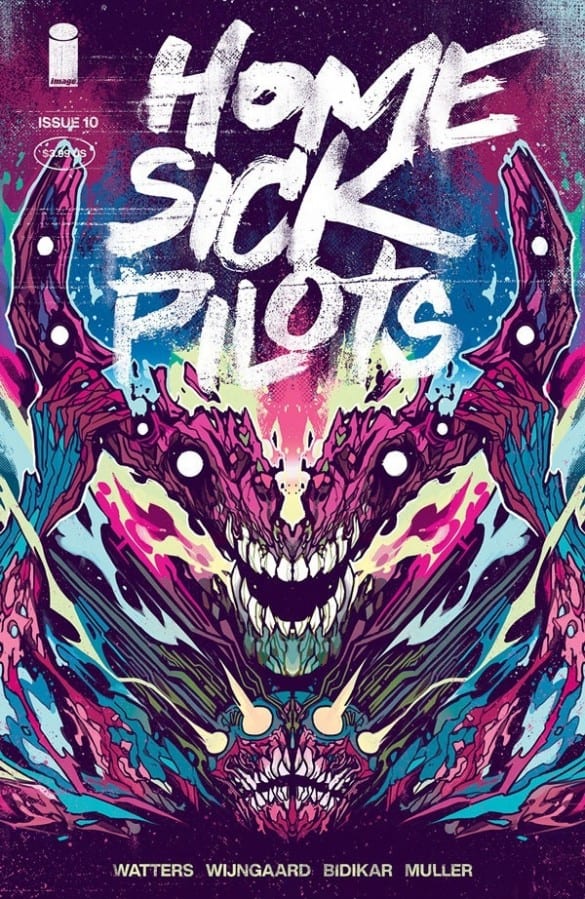 Caspar Wijngaard’s art and colors continues to be the high point of the series as a whole. I wish he got to play around with more mech and ghosts designs. When he gets to do them they are fantastic and  think there is a wasted opportunity to let his imagination go wild in this series. When Ami transforms into her “ghost” form or whatever you want to call it or Meg’s ghost/mech suit design are truly stunning.

I continue to absolutely adore the coloring in this series. The way Winjgaard plays with the pinks, whites and blues throughout this issue and the series as a whole has been magical. The colors truly capture your eyes and brings weird joyful yet eerie tone to the series. He throws some magnetic green into this issue as well to delightful effect.

Aditya Bidikar lettering is a subtle effect that brings a nice sense of urgency to what is happening, while Tom Muller overall design work is the icing on the cake for the visual aspects of Home Sick Pilots #10.

I still love Home Sick Pilots for some reason though I seem to complain about it a lot. This past story arc though has been a struggle for me, the pacing and overall tone of the story has just been odd. I believe the series may need to lean into the more "silly/goofy" aspect of itself. Not that it can't be serious and add in these political tones. But, it could be a little more fun as well. I feel like this story could have been wrapped up two issues earlier and or they could have done some other stuff while they teased this in the background and built it up a little better. Maybe I had different expectations of the series when it was advertised as "Power Rangers meets The Shining". What I am saying is I want more Power Rangers! So, that could be my problem, not that I am right or wrong, just that is what I was personally expecting.

There are a lot of good things I like about Home Sick Pilots. The characters are well written and the story concept is fantastic. I mean ghost powered giant robots fighting ghost powered haunted houses and 90's high school punk bands! Plus the visuals are tremendously well done and the overall design of the series is fantastic.