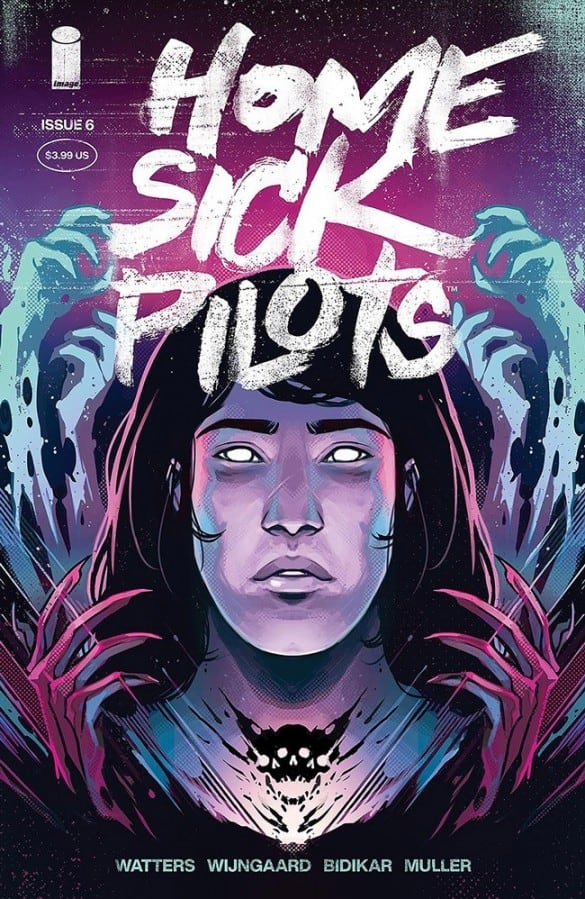 Issue #6 of Home Sick Pilots starts off a brand new story arc for the series. After, Ami fought off and beat the VHS ghosts, she sunk herself and the Old James House into the Pacific Ocean along with bandmate/friend and fellow ghost possessor Buzz. Rip is the only member of the former High school punk band The Home Sick Pilots left. Meg also happens to be the only member of rival punk band the Nuclear Bastards as well. The Old James House murdered Meg's bandmates and after Ami's battle it has left her covered in some symbiotic/ghost conduit blood. The Government group System Disrupt takes Meg and Rip to their facilities after the mayhem. They want their own ghost’s powered "mech" and Meg and her weird blood suite might just be the key!

Ah, Home Sick Pilots, the series I love but can’t quite tell you why, starts off a new arc here with Home Sick Pilots #6. I was eagerly awaiting issue #6, as the first story arc wrapped up and I was hoping for some more character and story information to pull the series together. We get a bit of that in issue #6, but it still leaves me scratching my head by the end of it.

The great thing about this issue is we do get to learn more about this wild “ghosts busting” government agency that randomly showed up. Dan Watters drops a ton of information about “Project Disrupt” and what they are all about. It did help clarify what was going on in previous issues. Watter’s also digs into the characters of Meg and Rip, letting us grow a deeper connection with them as well. Both of these characters get some major development in this issue. With all the trauma they have been through they both come together in a nice way in Home Sick Pilots #6.

Still, though after six issues, I am not exactly sure what Home Sick Pilots is or what it wants to be? At first it felt like this 90’s teenage drama coupled with a haunted house and ghosts. Then it morphed into this big mech/ghosts kaiju battle thing. But, it never gave us anything to cling onto. The characters never felt fully developed, making the story a weird collection of things not really going anywhere. The series feels like it needs a “mission statement” or something in the vein of that. Like, hey this is what we are or this is what the book is. Since the comparison to Power Rangers comes up in the solicit for the 1st issue (which you can read Home Sick Pilots #1 for free here). I would have like to have seen something like Ryan Parrott did for the first twenty or so issue of Go! Go! Power Rangers used in Home Sick Pilots. Tons of character worked coupled with this wild story.

I do continue to enjoy the art by Caspar Winjgaard. Winjgaard gets to play with some great set pieces in Home Sick Pilots #6 and details some the facilities of Project Disrupt immaculately well. Also, continued delightful character cartooning and acting. The coloring and overall design of the series continues to be the highlight for me (props to Tom Mueller credited for designer). 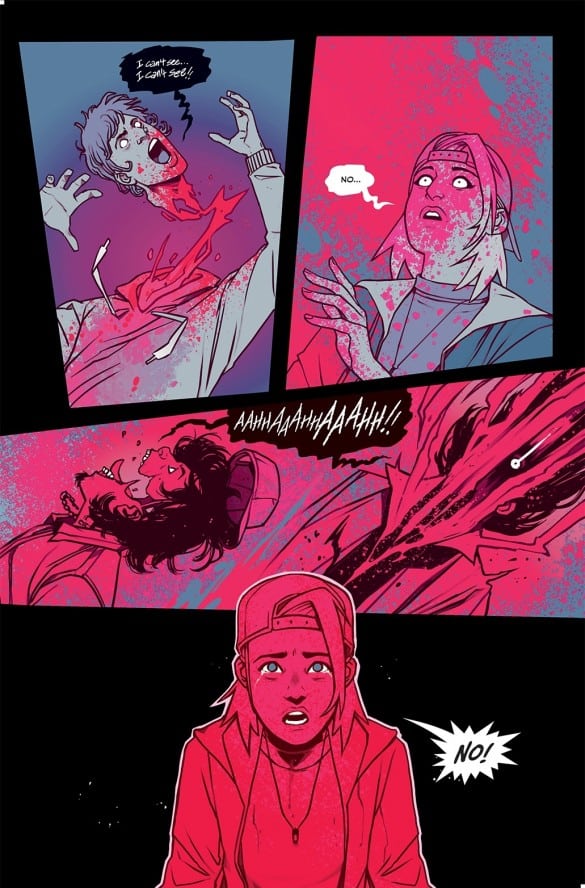 Winjgaard’s use of pinks, reds and blues throughout the series has been excellent. Using them to accent and highlight certain story points within his art has been a wonderful visual story theme. While it also, gives the series this more “nonchalant” “fun” vibe as well, despite all that is going on. The art/style of this series gives of this electric vibe that brings me in. It gives off a feeling that continues to draw me right into it despite not fully grasping or connecting with the story.

Gosh, my final thoughts on Home Sick Pilots #6 is rough. I mean after six issues I still do not understand what we are going for here. After spending so much time with Ami we completely switch directions to Meg and Rip, feeling that we got to know her and her story.  Now we are learning about Meg and Rip, plus the government funded "ghostbusters" they are now involved with. It seems we never truly get to latch onto anything with this series.

But, man do I really continue to like it and want more at the same time. These ghosts/mech/creature things continue to be great. I mean you mention '90s power rangers, punk rock and giant battles I am coming for more.